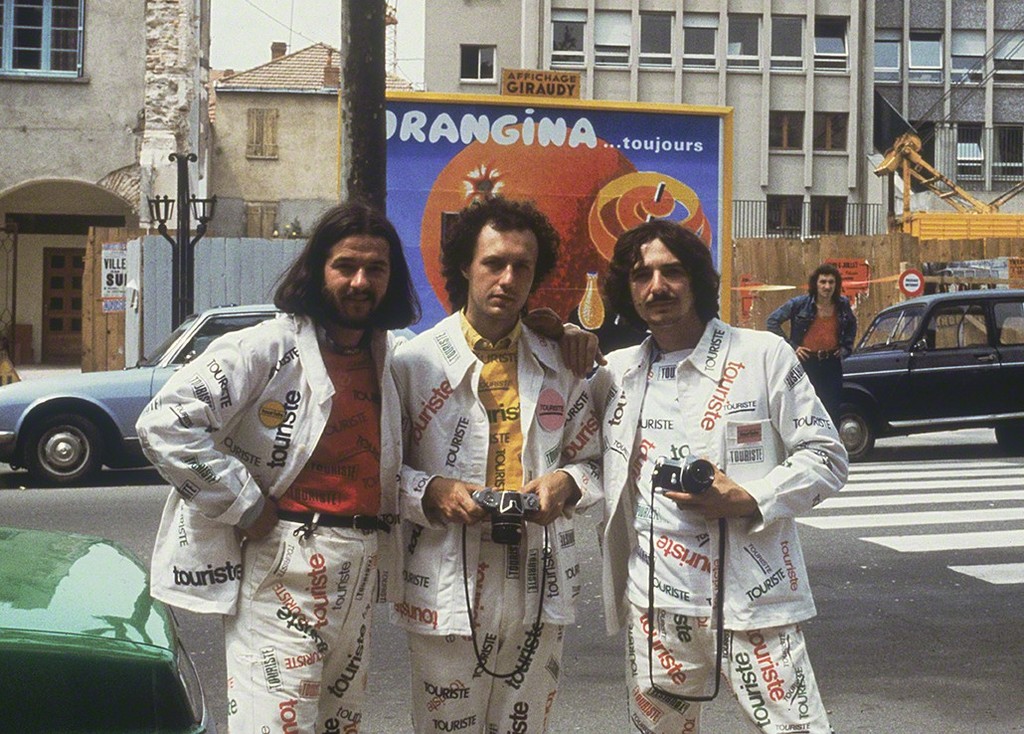 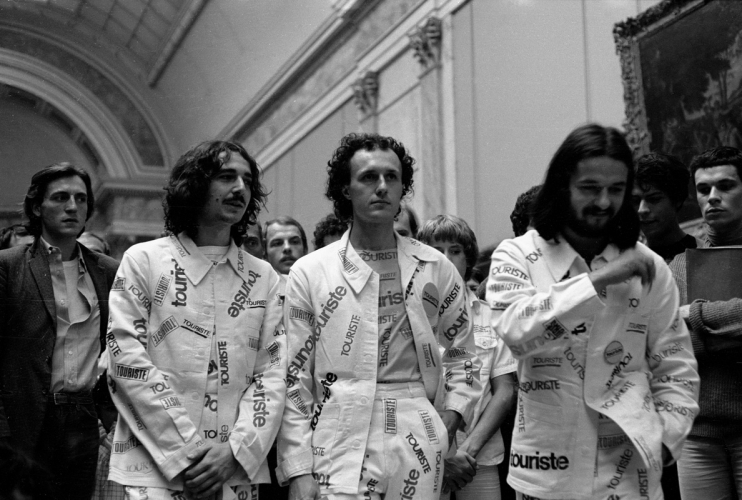 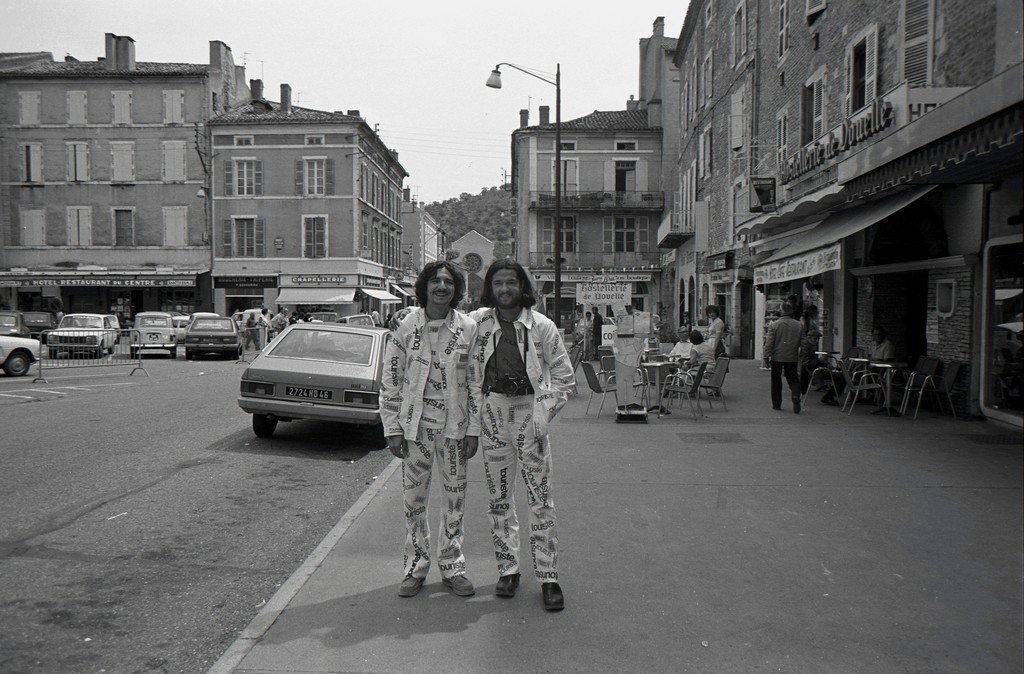 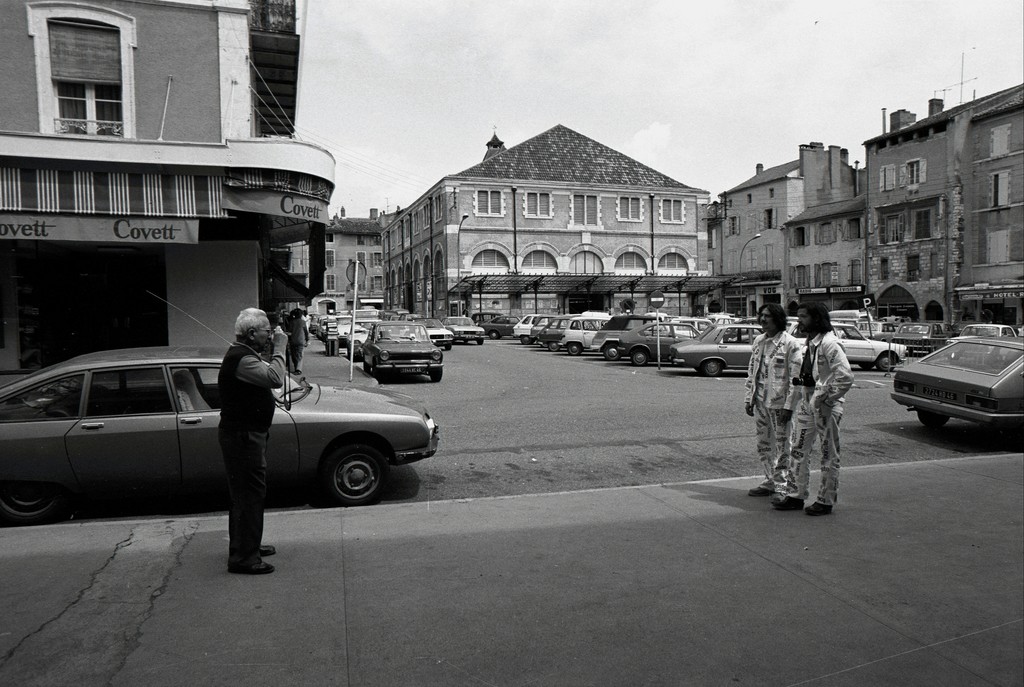 The UNTEL group is back!

After LA BOÎTE UNTEL and LE SAC UNTEL and its amazing success at FIAC in 2013, mfc-michèle didier asked UNTEL to reactivate Touriste, its 1978 performance. For this performance, the members of UNTEL were supposed to stroll in the streets of Cahors so people would take pictures of two of them, while the third one documented this action.

Each member of the trio (Jean-Paul Albinet, Philippe Cazal and Wilfrid Rouff) were dressed in a Touriste costume, a sort of two-piece construction painter suit, consisting of a white shirt and white pants and a tee-shirt, that were silkscreened, and covered with the word «touriste» (tourist) – in various types and colors – and badges.

On October 16, 1978, during their Fashion Show performance in the Grande Galerie du Louvre, UNTEL presented the Touriste collection.These three historical costumes will be the centerpieces of the new exhibition by the UNTEL group at mfc-michèle didier gallery. They will be presented with twelve photographic diptychs of the series Touriste, made in Cahors. Together, the costumes and dyptichs will form an artwork by UNTEL.

On this occasion, a new limited edition will be produced by mfc-michèle didier: UNTEL, LA CHEMISE TOURISTE (UNTEL,THE TOURIST SHIRT). It will complete the original clothing ensemble. A model for women and a model for men will be manufactured in three sizes (S, M, L). The shirts will be available for sale at mfc-michèle didier gallery, which will turn into a real boutique, and become the official supplier of UNTEL’s latest creation.

Contrary to the new scenery that is in sight in le Haut-Marais, the neighborhood in which mfc-michèle didier is located since 2011, and where all the historical wholesalers tend to disappear, UNTEL has decided to invest the gallery by proposing a scenography that’s worthy of the major brands. For the duration of this exhibition, mfc-michèle didier will be more part of the Haut-Sentier, than the Haut-Marais.

The tourist’s relaxed attitude is now to be considered as a motive Made in Paris, like an artistic attitude. L’ART D’ETRE TOURISTE... THE ART OF BEING A TOURIST... a posture that has been thoroughly scrutinized by UNTEL, who are true analyst-experts of the urban landscape. This ability to analyze the city’s day-to-day life can also by seen clearly in VIE QUOTIDIENNE – Environnement de type «Grand Magasin» (1977), an installation that interrogates the reality of the ordinary life in an urban context, by proposing an inventory of vacuum-packed samples and objects excerpted from a completely banal context, yet very revealing of the era, as a sort of archeology of the everyday life. A timeless look on the consumer society, that the current economic reality reactivates violently.

It is your turn to play the game of the ART OF BEING A TOURIST. So, follow the guide and put your shirt on!

On November 19, 2015, the evening of the opening of the exhibition, at 7.30 pm, a real life fashion show: three girls and three boys will show the shirt UNTEL, LA CHEMISE TOURISTE. With the models wearing nothing but a shirt, the fashion show will be very short but memorable!

Happenings and joyful provocation are words that could quickly summarize UNTEL’s actions. But what does this anonymous appellation refer to? (UNTEL is a French word that means something like « an unnamed, unidentified person ».) Who are those people that can’t be named?

UNTEL is a group of artists consisting originally of three French artists, Jean-Paul Albinet, Philippe Cazal and Alain Snyers. (Wilfrid Rouff replaces Alain Snyers when he leaves the group in 1978.) During its short but passionate existence, from 1975 to 1980, the group has led numerous actions in the public space: reconstitution of Manet’s famous Le Déjeuner sur l’herbe at the Grand Palais for the Salon des Artistes français, or a fake Fashion Show at the Louvre showing Touriste costumes, and many polemical interventions in urban environment through whole France.

The common denominator of the group’s actions is the examination of the day-to-day life – a social and political questioning – very close to the revolutionary ideas of May 1968 and situationism.

UNTEL leads these actions as if they are investigations, inspired by the ordinary life, and exposes the banality and the insignificance of our every-day life together with our contradictions and alienations.

In order to express their ideas, UNTEL uses all possible supports and techniques they have access to: photography, film, sound, environments, gesture, corporal actions, objects, etc. Photography and video are two techniques they most appreciate and moreover, these are techniques that are perfectly adapted to the nature of their work. Indeed, in order to be able to preserve their interventions, they systematically have to document them.

These archives provide a rich documentation that helps us recall their adventures, as concretely as necessary to understand the challenges of their work.

All the accessories and devices imagined and produced by the three artists offer new possibilities to activate their urban adventures in the most relevant way.

Forty years have passed since their first projects after finishing their studies at l’École nationale supérieure des Arts Décoratifs in Paris.