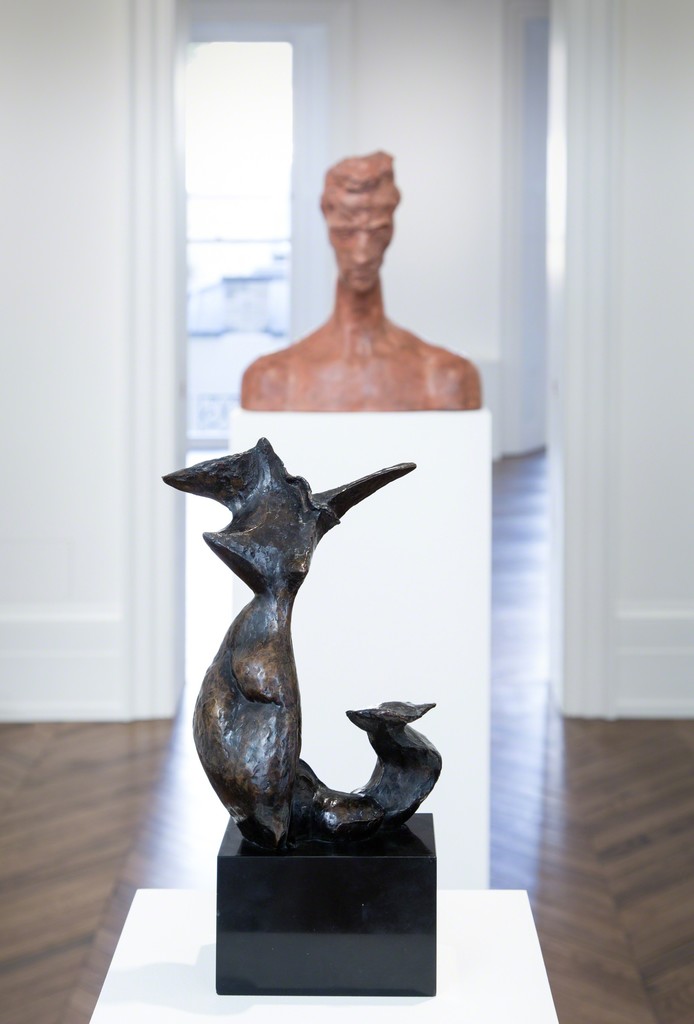 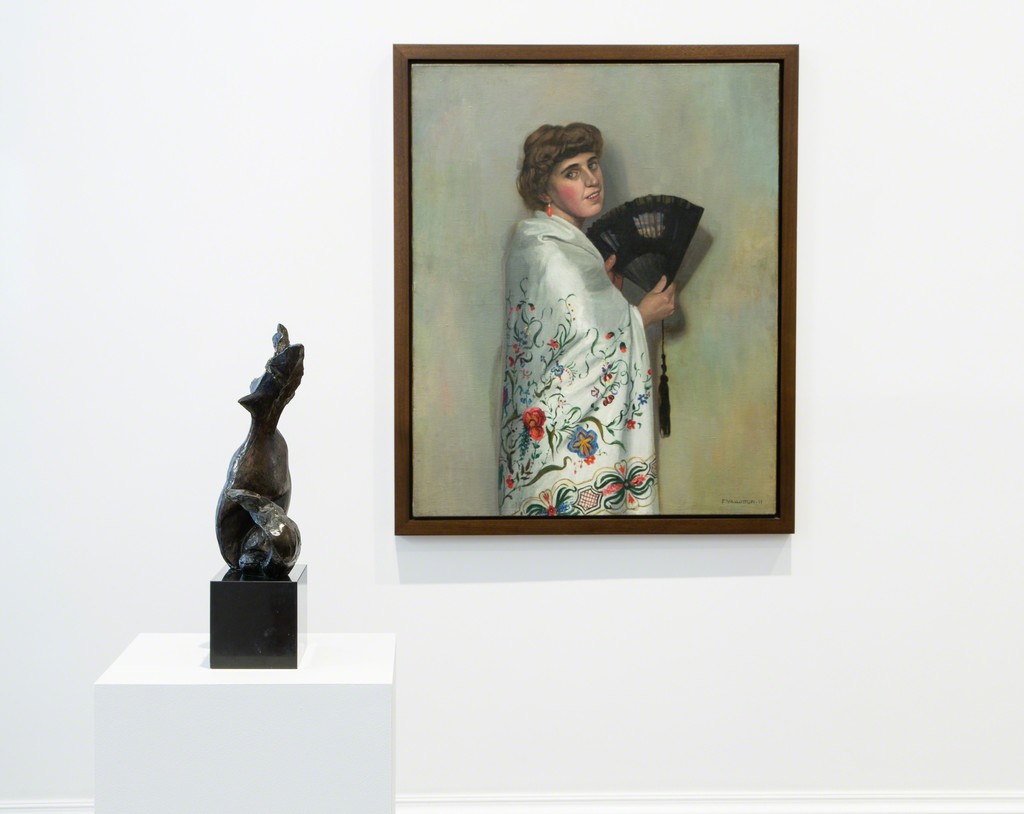 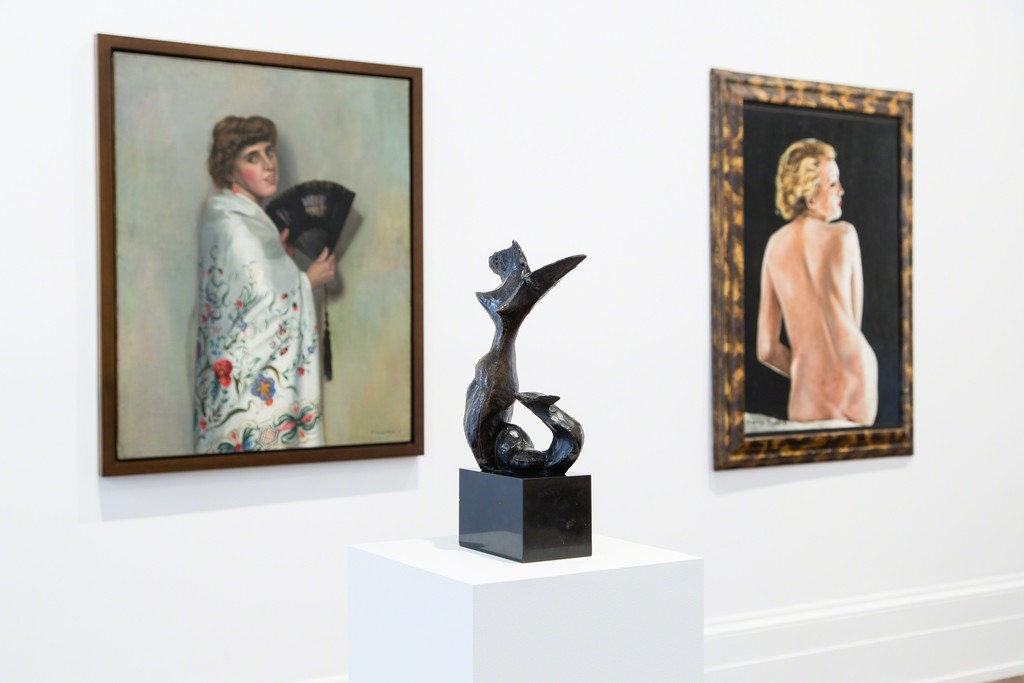 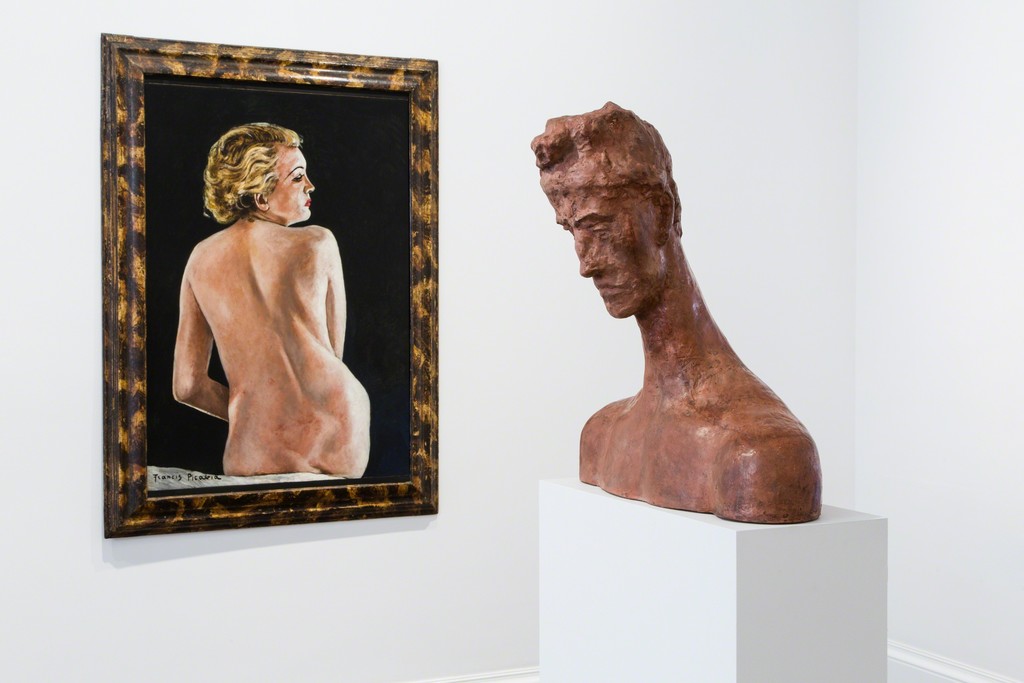 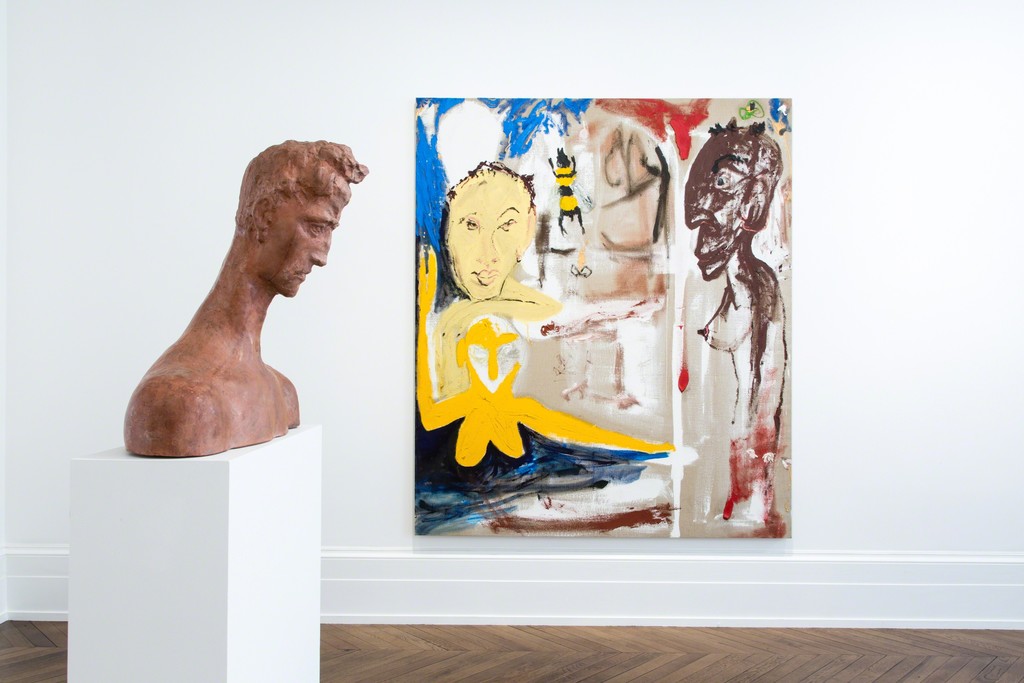 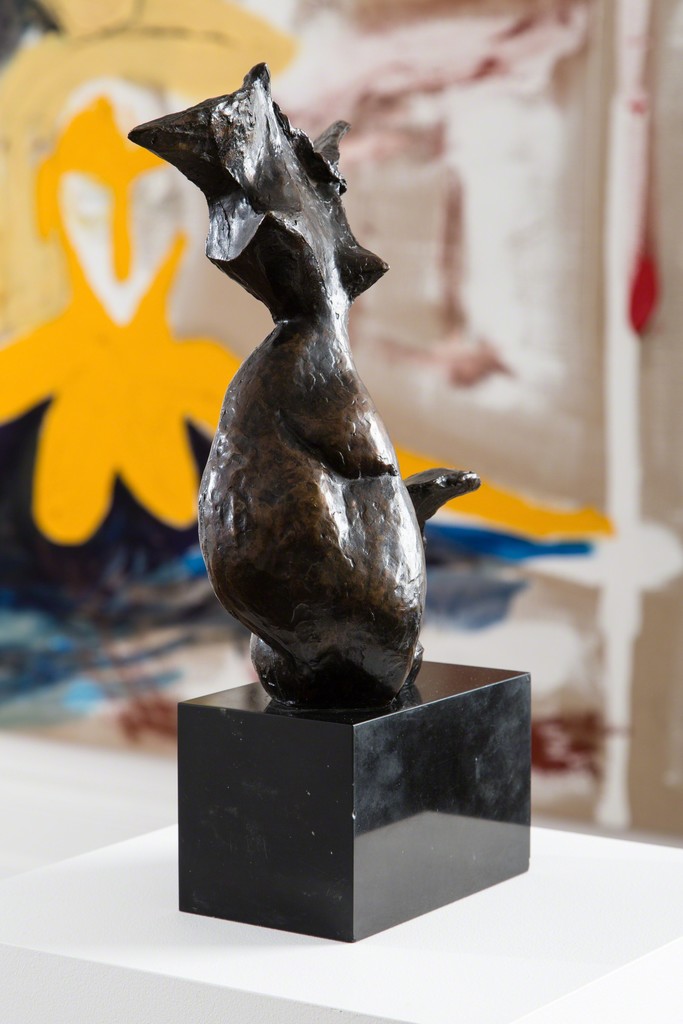 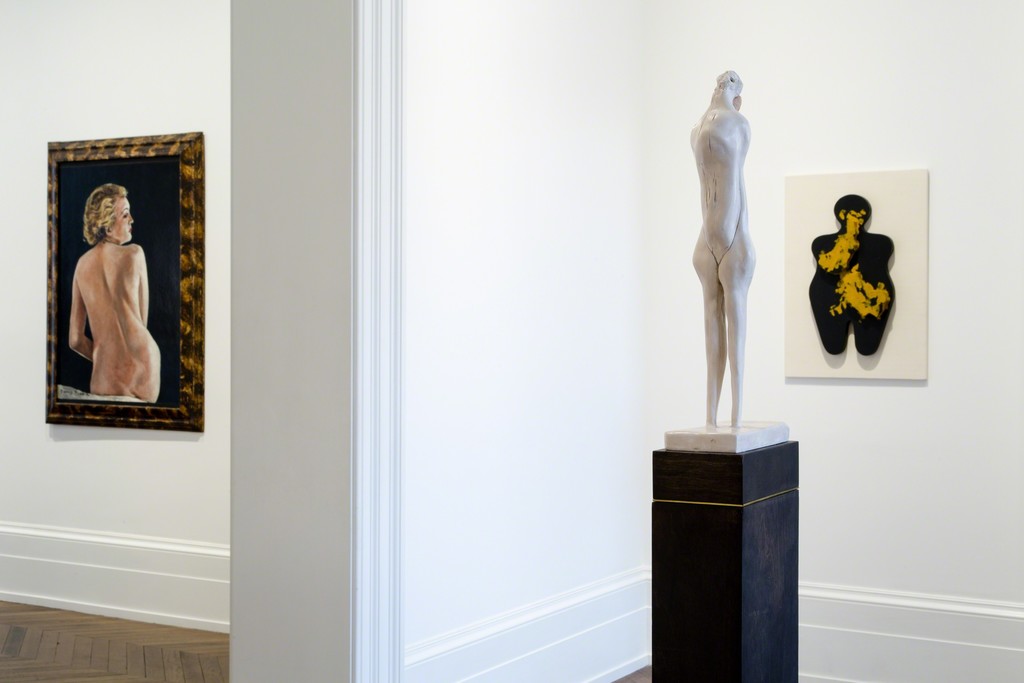 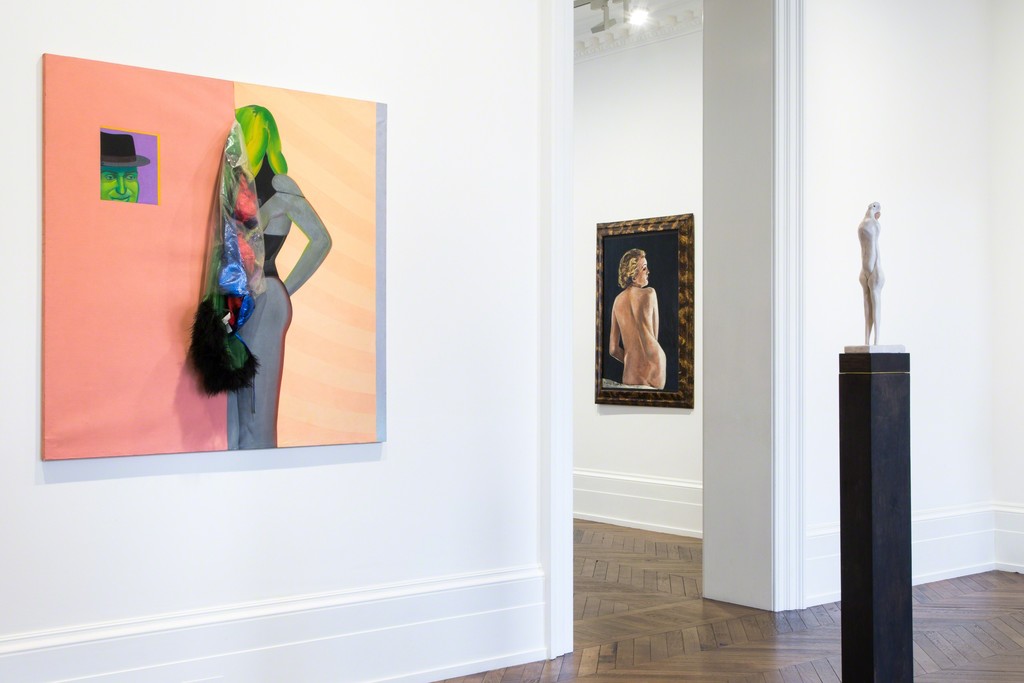 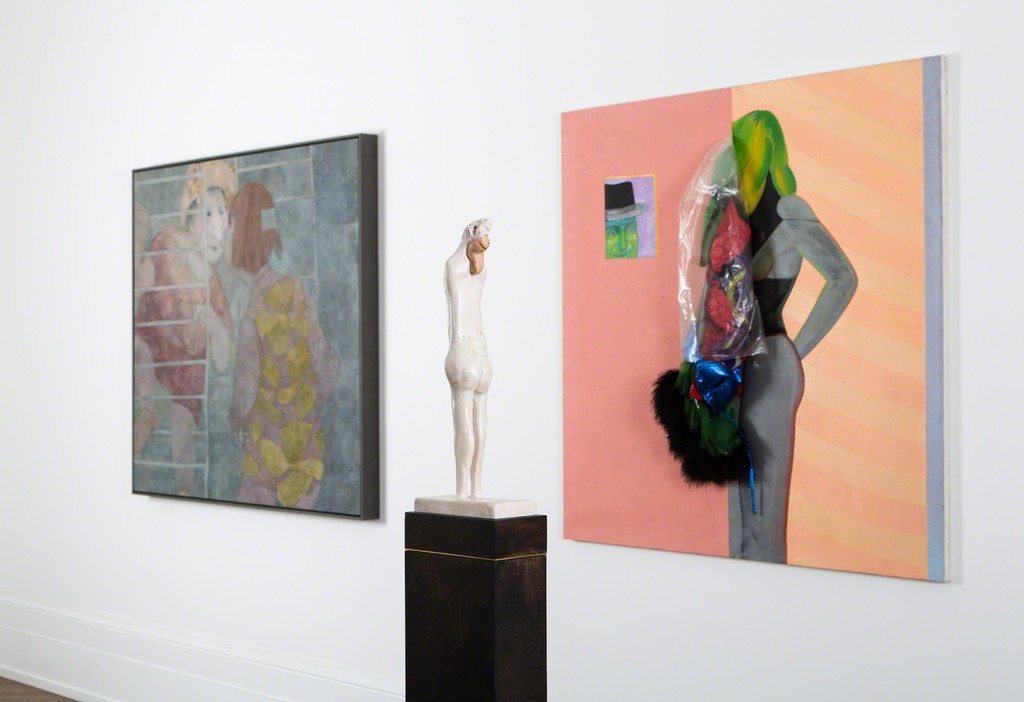 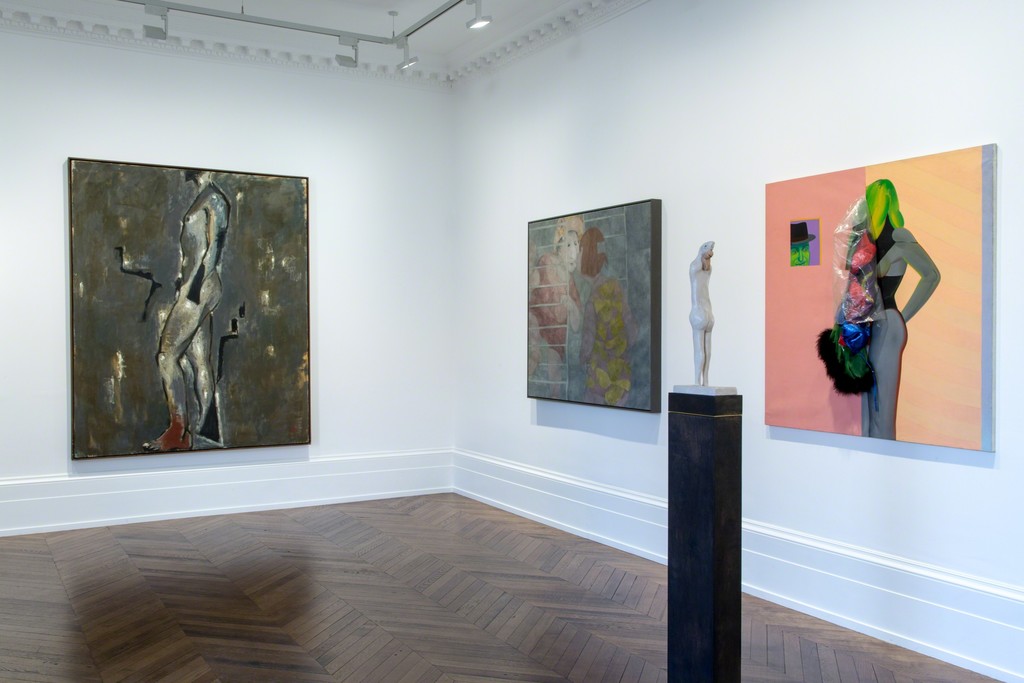 Comprising works from the early twentieth century to the present day, Body Shop considers works by several diverse artists for whom the human figure is a recurring motif and a significant source of renewal and invention. Spanning generations and styles, the artists in Body Shop share a tendency toward fragmentation, distortion and pastiche – all aspects of the grotesque. A 1914 terra cotta sculpture by German artist Wilhelm Lehmbruck, one of the earliest work in the exhibition, embodies the general spirit of the works on view. An important early Modernist sculptor, deemed “degenerate” in the years following his death, and later highly revered by future generations of artists, Lehmbruck synthesized Romantic, Gothic and Mannerist influences with the Neoclassical tradition from which he emerged, creating deeply expressive truncated busts and elongated figures.

French artist Pierre Puvis de Chavannes – Lehmbruck’s predecessor by a generation – exerted a similar influence on future modernists. Academically trained, as Lehmbruck was, Puvis de Chavannes developed a complex style, seemingly classical in execution yet possessed of a uniquely pre-modern simplicity and flatness of form. These qualities presaged modern abstract formalism and later exerted a great influence on Cézanne and the Surrealists.

Lehmbruck’s fragmentation and Puvis’s abstract formalism are echoed fifty years later in David, a masterwork by American artist and architect Frederick Kiesler. Executed in steel, bronze, silver and wood, Kiesler’s monumental sculpture deconstructs the human form against a stark architectural armature, combining Surrealist and Constructivist influences. A surrealist disposition is felt as well in contemporary works by Kai Althoff and Enrico David. David leans toward a kind a veiled self-portraiture, creating in painting and sculpture a formalized “feeling of bodily presence and absence, assembling and dissolving in equal measures”, as the artist himself has described his more recent works. Althoff’s subtly painted, ineffable mise-en-scenes confound our will to make sense, opting for evocation and suggestion against overt narrative.

An expressionistic variant of the narrative bent distinguishes the monumental paintings of Don Van Vliet. His American interpretations of European expressionism – a self-taught homespun surrealism – evokes, in the words of A.R. Penck, “the demonic animality of man”, while nodding also to mid-century New York school abstraction. Markus Lüpertz also engages the fluid divide between figuration and abstraction, channeling the great historical traditions of painting and sculpture, remaining free to re-imagine the major stylistic conventions of modern art. A selection of Lüpertz’s monumental paintings from the 1980s showcases the artist’s interest in classical narratives and his singularly inventive abstract figuration.

Anatomical distortion is the departure point for explorations into abstraction in works by Henri Laurens and Hans Arp. Laurens’ diminutive bronze “Winged Mermaid” of 1938 retains the influence of the artist’s early Cubist style while signaling a shift toward something more lyrically abstract. Distortion toward refined reduction characterizes Hans Arp’s painted wood reliefs from the mid-twentieth century. His subtle, Surrealist inspired figures evoke an iconic or fetishistic quality. Fetishism of another sort defines the works of Allen Jones, erotically charged visual and material collages infused with the Pop spirit that marked his period.

Francis Picabia and Félix Vallotton appear to have worked primarily in a highly academic style. Curiously, a highly postmodern sensibility informs their respective working processes. Both artists engaged photography, in combination with sketches and drawing, to realize their major works. This practice was undertaken with scant irony and near total disregard for the ongoing debates over the efficacy of photographic versus painterly images. Vallotton aimed for direct visual sensation, disregarding the idealized nude and academically realistic depictions of a body. His paintings have a dry truthfulness to them, an oddly photographic rendering that lends the works a subtly voyeuristic, perhaps erotic, atmosphere. Picabia as well invoked distortions and eroticism in his so-called “kitsch” paintings of the 1940s. Derived from girlie mags and Hollywood headshots, Picabia’s “portraits” were all but ignored by critics and academicians, who deemed the works amateurish or insincere. Picabia’s importance to later generations of artists has only recently become clear.

The newest work in the exhibition is by British painter Peter Doig. Known for works which explore the psychological and physical realm between description and invention, Doig often looks back in history to find renewal and reinvention in painting today. His interest in history and classicism lends his paintings a concrete, formal directness which, combined with his inventive palette and free use of memory, photography and images from other painting, results in a strangely melancholic or dreamy atmosphere.