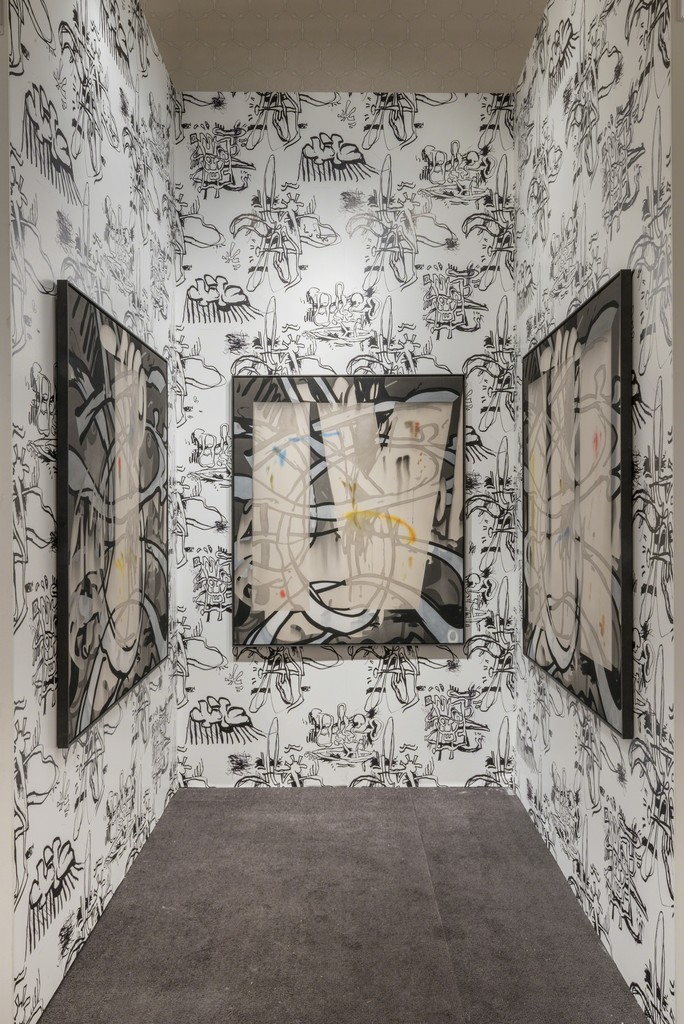 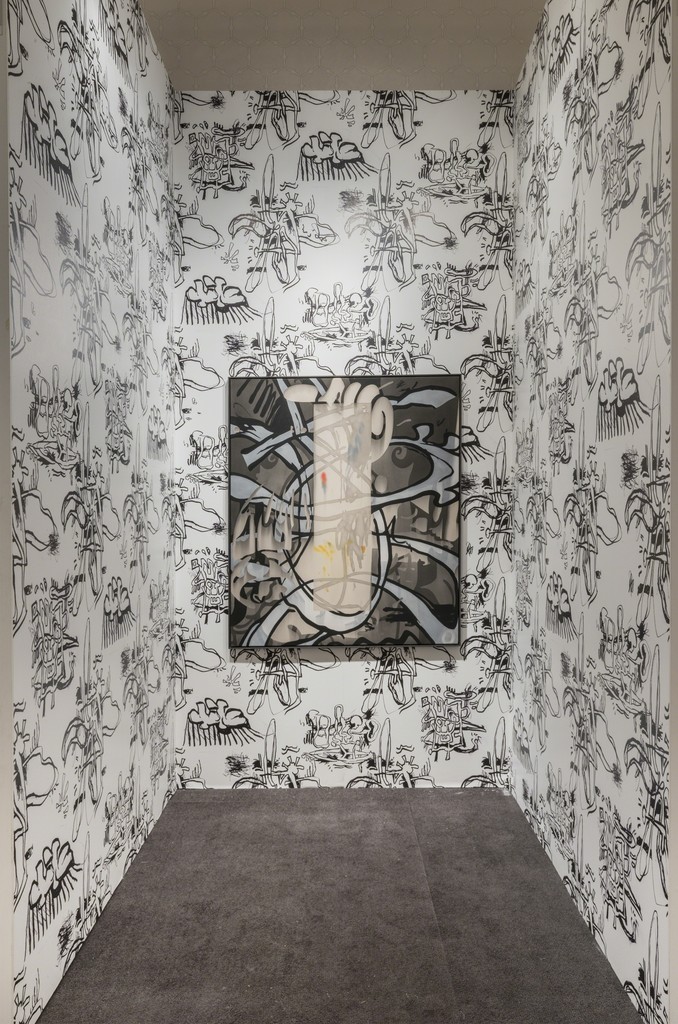 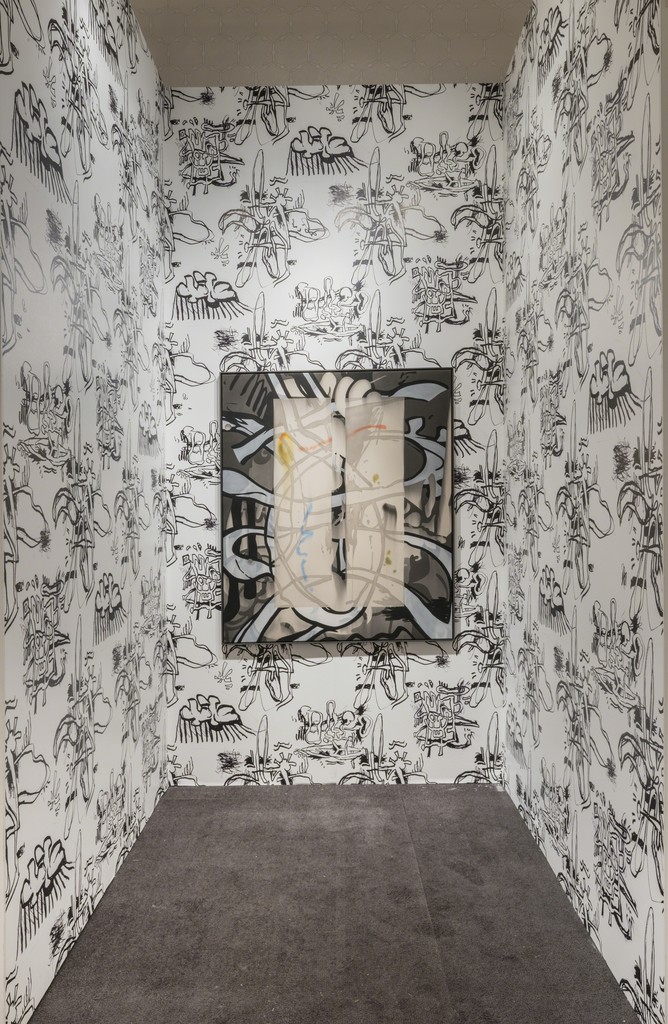 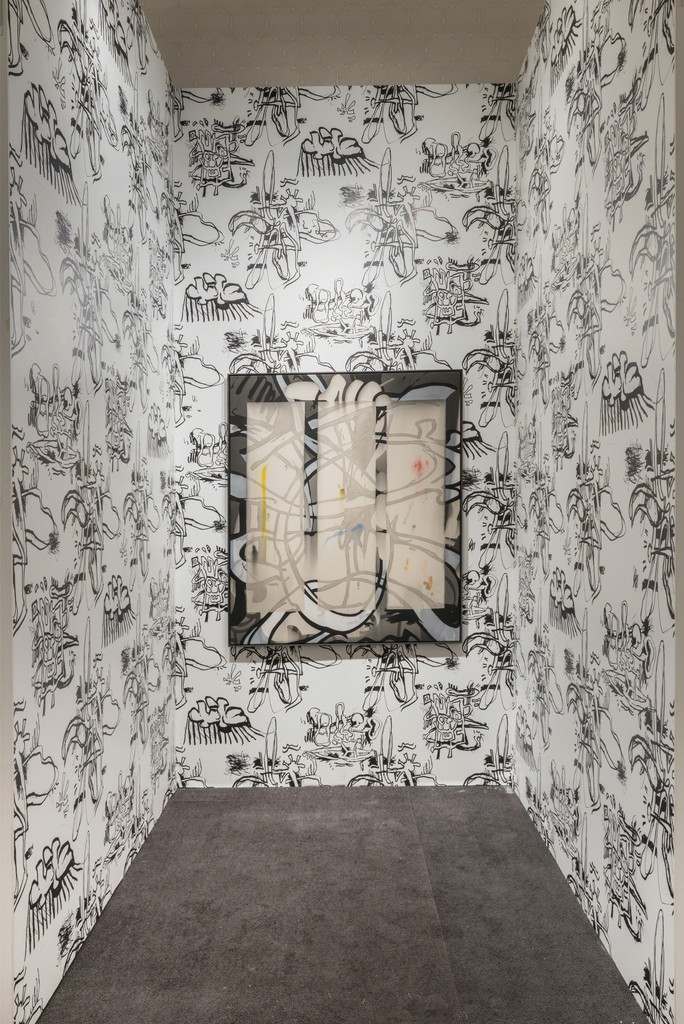 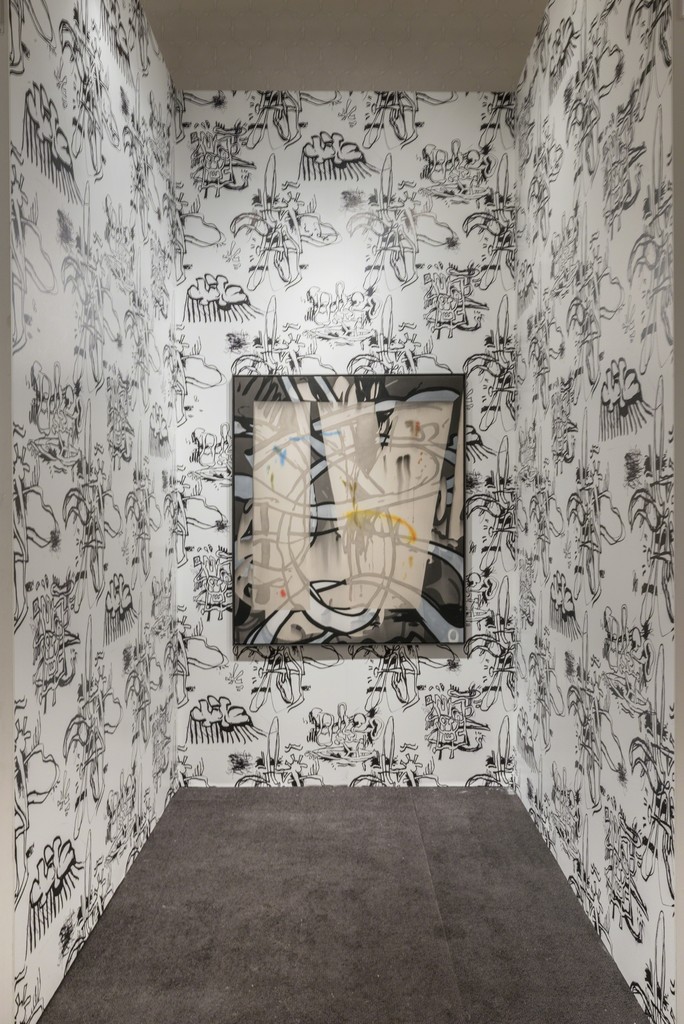 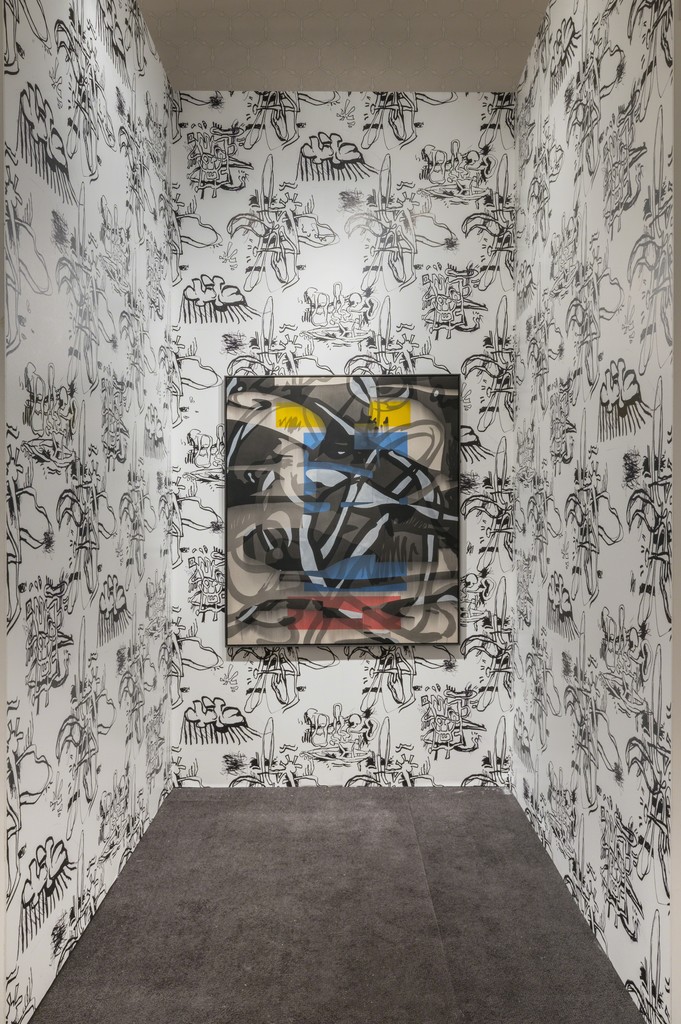 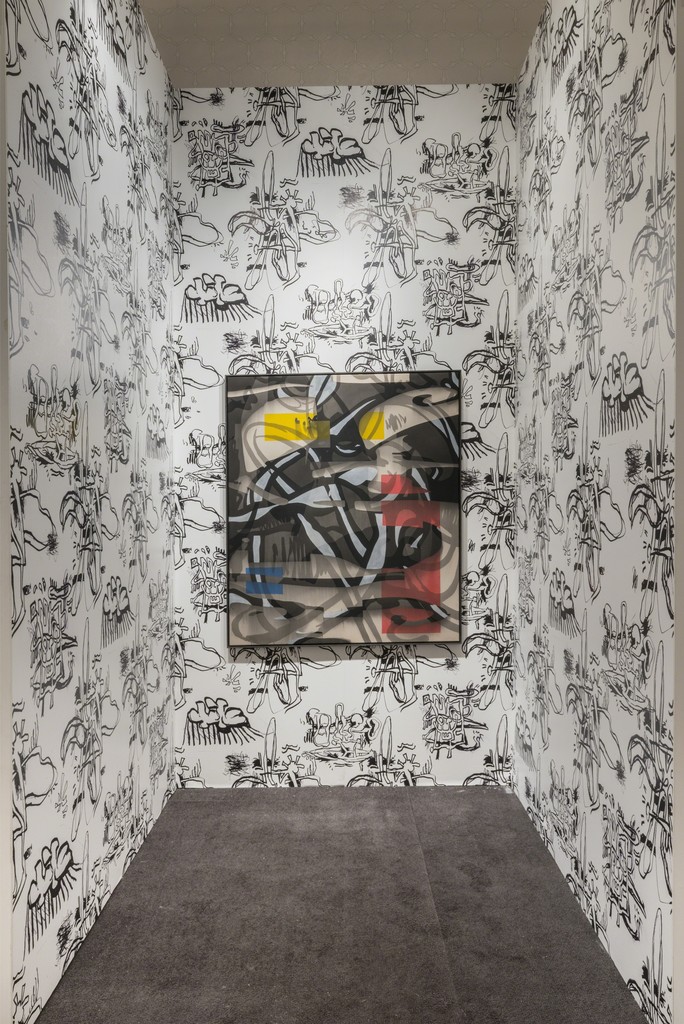 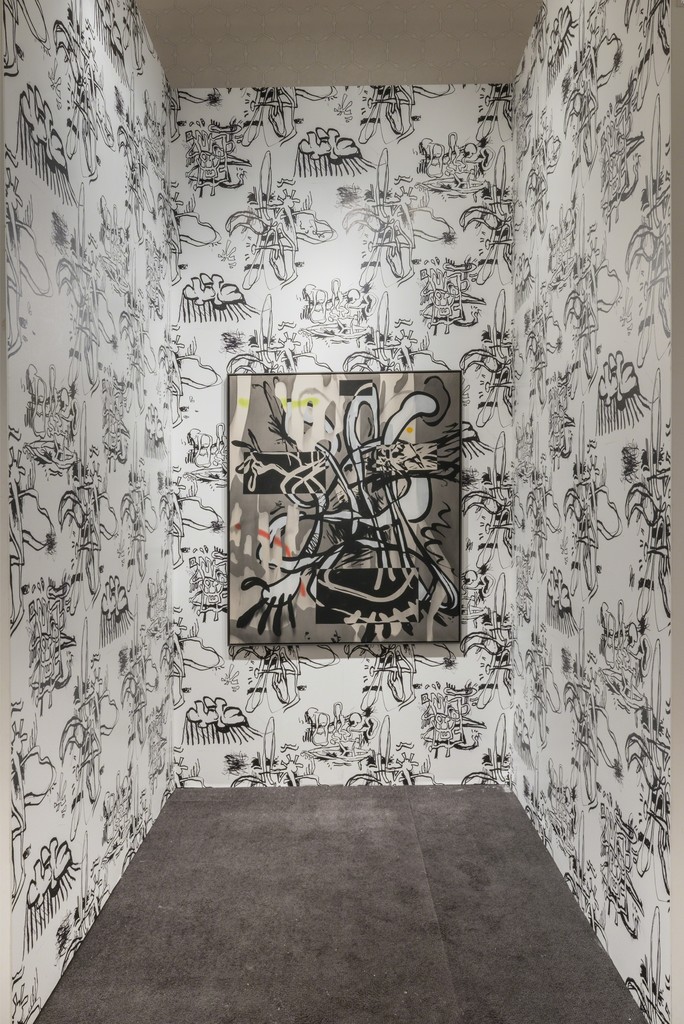 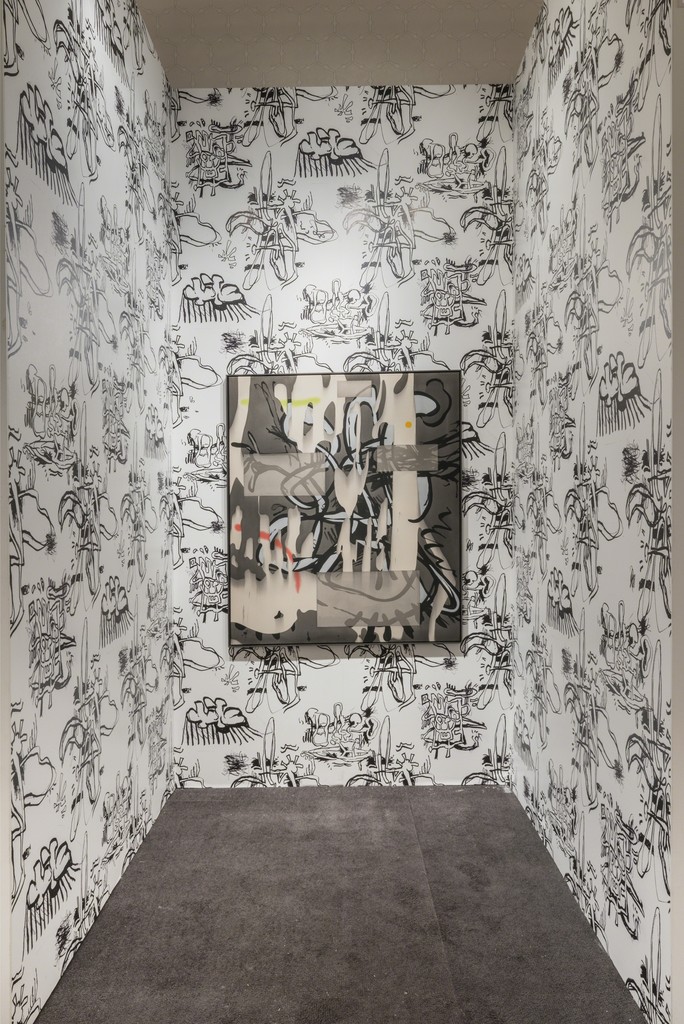 MIER GALLERY is proud to present a solo project booth for NADA Miami Beach 2015 featuring the work of German-born artist Jan-Ole Schiemann. We will mount one of eight new paintings at a time, displaying a different work hourly each day of the fair, while incorporating his rigorous drawing practice in an atypical form – wallpaper. The dynamic environment that the wallpaper will create offers his paintings a backdrop to play off of, also emphasizing the many-layered nature of his process.

A recent graduate and student of Albert Oehlen and Andreas Schulze at the Kunstakademie Düsseldorf, Schiemann challenges the tradition of paint on canvas through collage-like techniques in multiple layers of ink on unprimed canvas. Small bursts of bright color emerge from his predominantly grayscale and brown toned paintings. His pale boxes, called loops, disrupt any hierarchy in his compositions, questioning the traditional figure-ground relationship within his practice. Blurring the lines between abstraction and figuration, Schiemann constructs works of a psychological and playful nature.

Schiemann’s foundation of surreal imagery is based on Max Fleischer’s groundbreaking 1930s’ cartoons, featuring such iconic characters as Betty Boop and Bimbo. Painting almost entirely in ink, referencing Fleischer’s own medium, Schiemann builds layer upon layer to create illustrative compositions. He begins by collecting stills, or part of a still, and collages the imagery using transparencies. These selections are then projected onto the wall, with each transparency serving as a new layer of the composition. The picture planes begin with bold, absorbent fields that act more like dyes or stains, providing the groundwork for successive layers of more restrained, sharp gestures. The resulting surface creates the illusion of depth, but is surprisingly flat.

Formally, Schiemann’s paintings follow a pattern similar to comic strips or even filmstrips, painted frame upon frame. The main characters emerge from the eerie, exaggerated shapes of shadows or the elegant curve of Betty Boop’s camisole – originally secondary players in a scene. Schiemann utilizes found footage from the cartoons alongside elements from his own drawing practice. Although the compositions are prepared in advance, there always remains an element of improvisation as the painting evolves.

In addition to his paintings, Schiemann’s works on paper are integral to his practice. Both bodies of work, often created simultaneously, influence and inform one another in form and content. In this presentation at NADA Miami Beach 2015, Schiemann has created a wallpaper based on his drawing practice, bringing together elements of memories and his own interpretations of the films. As shapes pop in and out, it is clear that many of the artist’s own marks and lines are directly translated into his paintings.

Jan-Ole Schiemann (b. 1983, Kiel, Germany) lives and works in Cologne, Germany and is a graduate of the Kunstakademie Düsseldorf under Albert Oehlen and Andreas Schulze (2007-2013). Schiemann had a solo show at Half Gallery, New York, NY (2015) and was recently included in 17 Abstract Paintings, Warhus Rittershaus, Cologne (2014) and Modell Kusntverein1: Benefiz Auktion, Kunstverein Aachen, Germany (2014). For more information, please email [email protected] or visit the exhibition online www.miergallery.com.