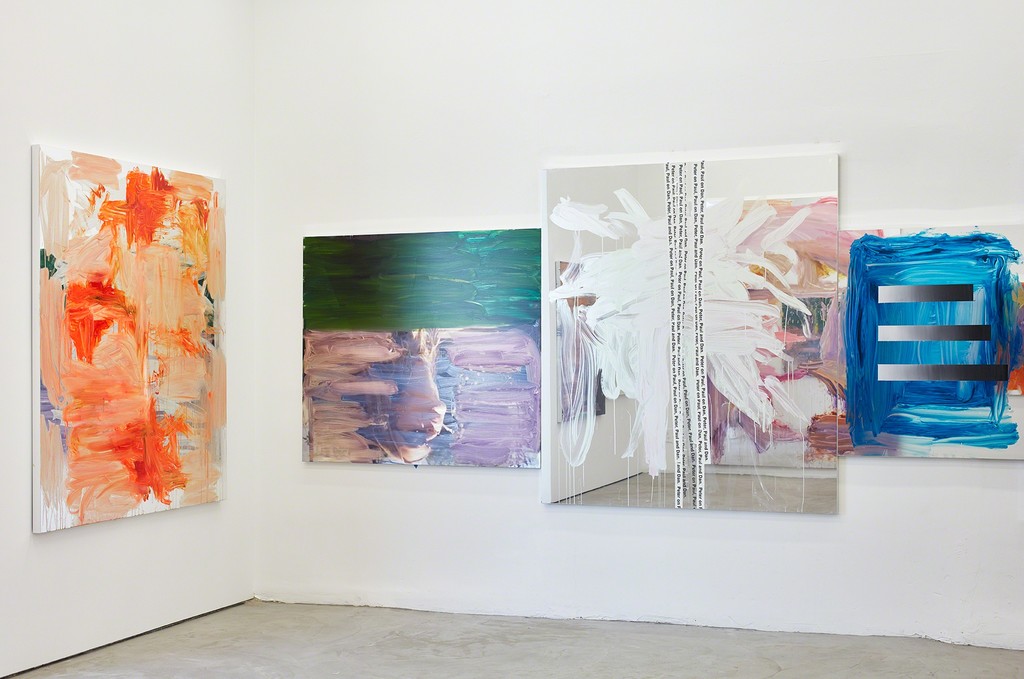 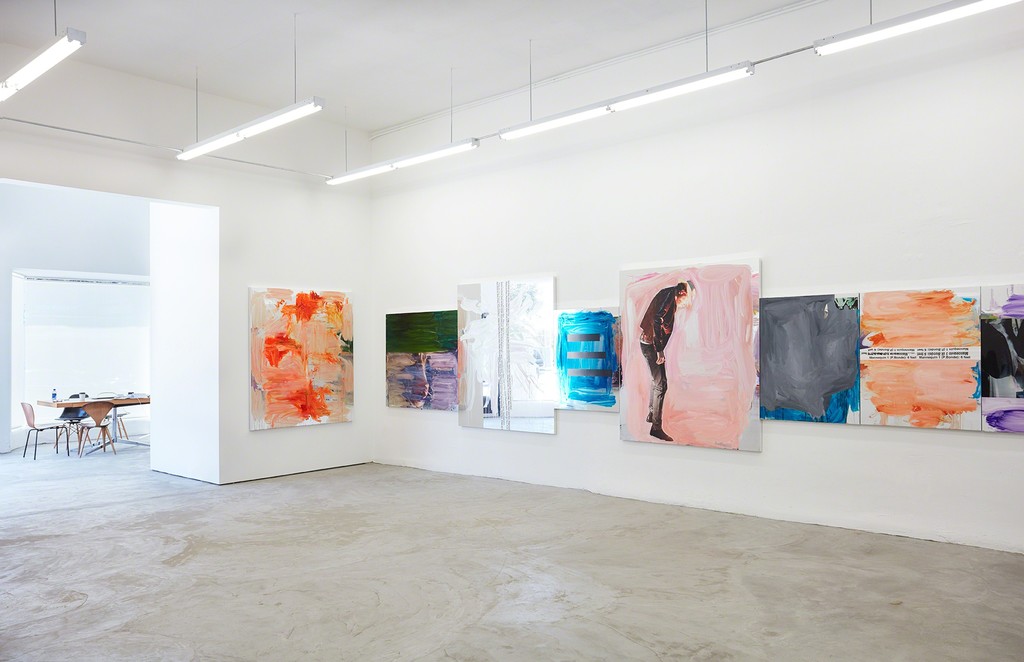 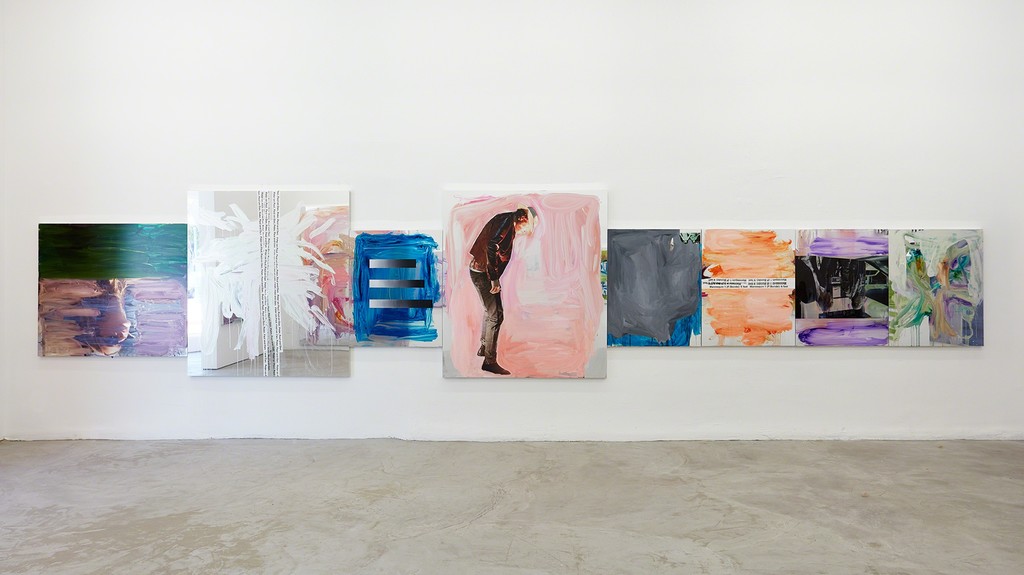 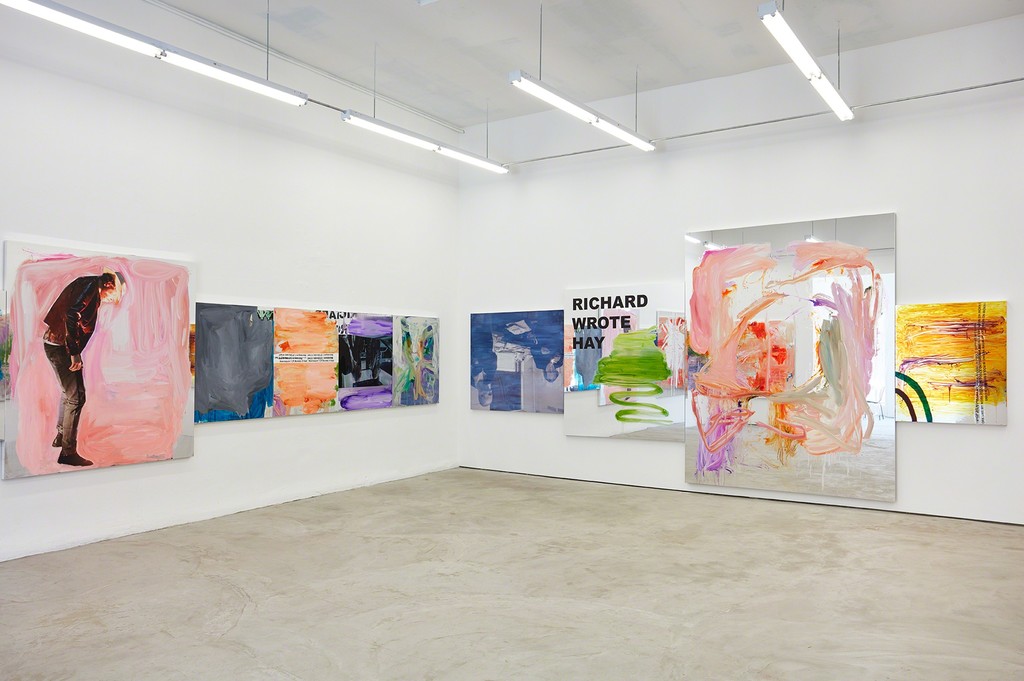 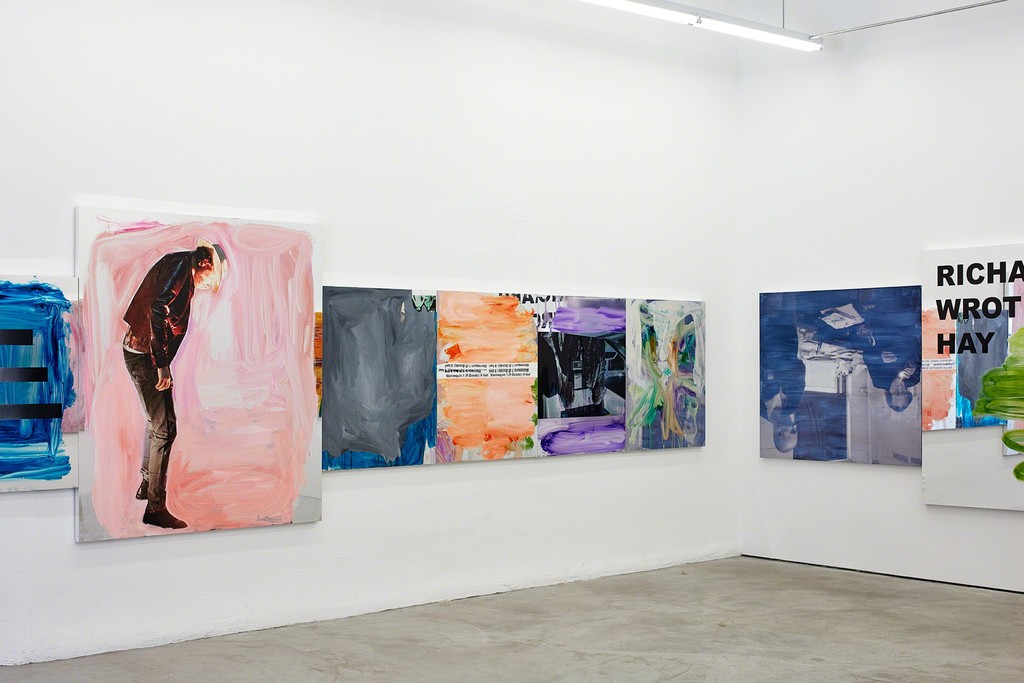 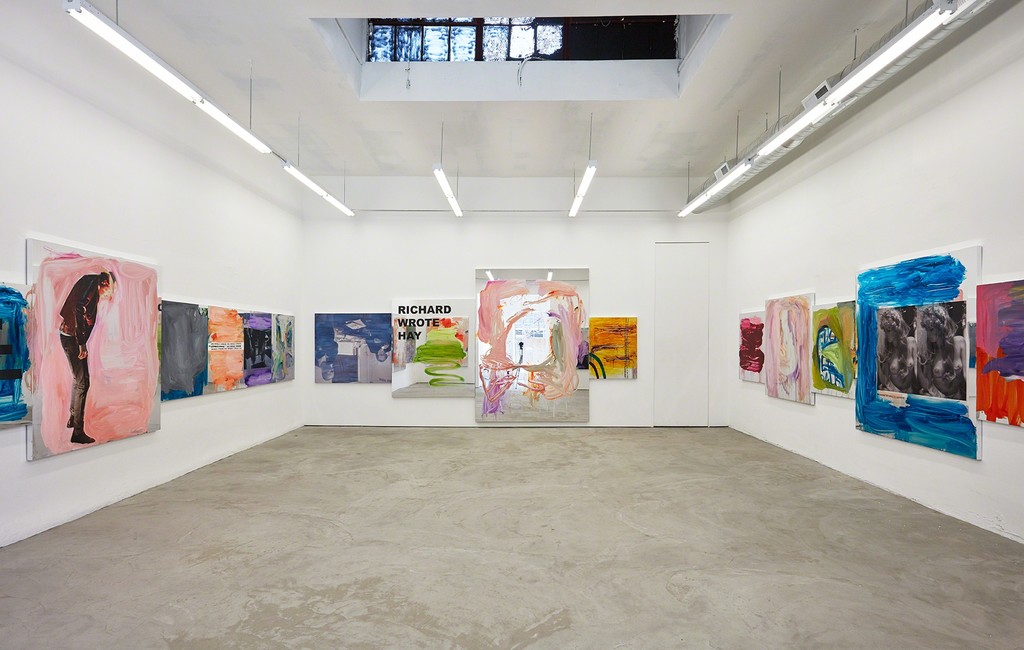 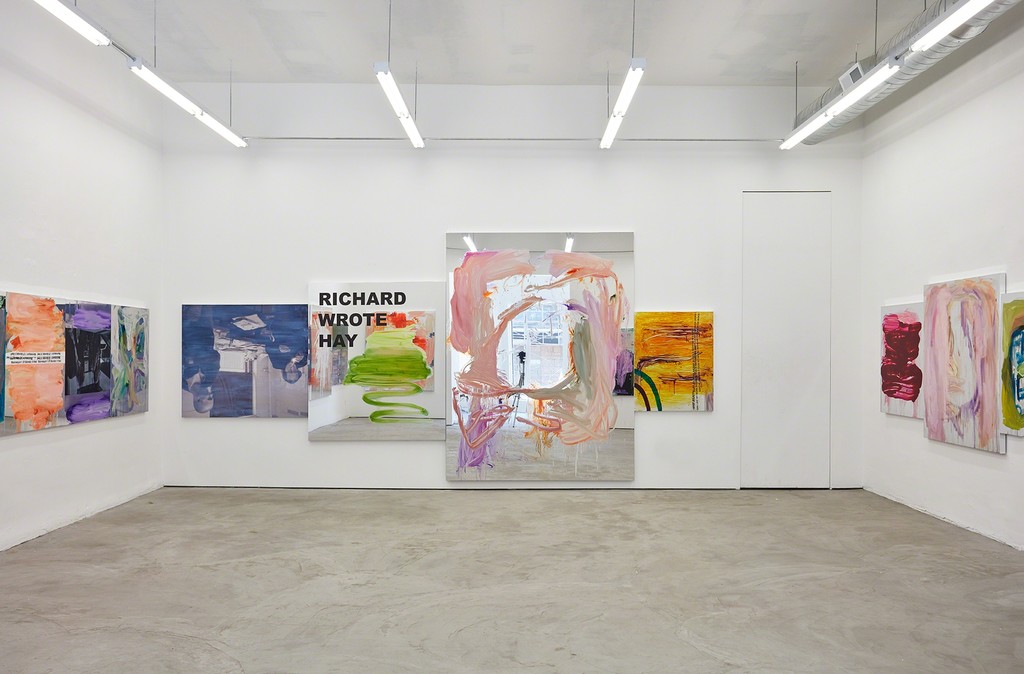 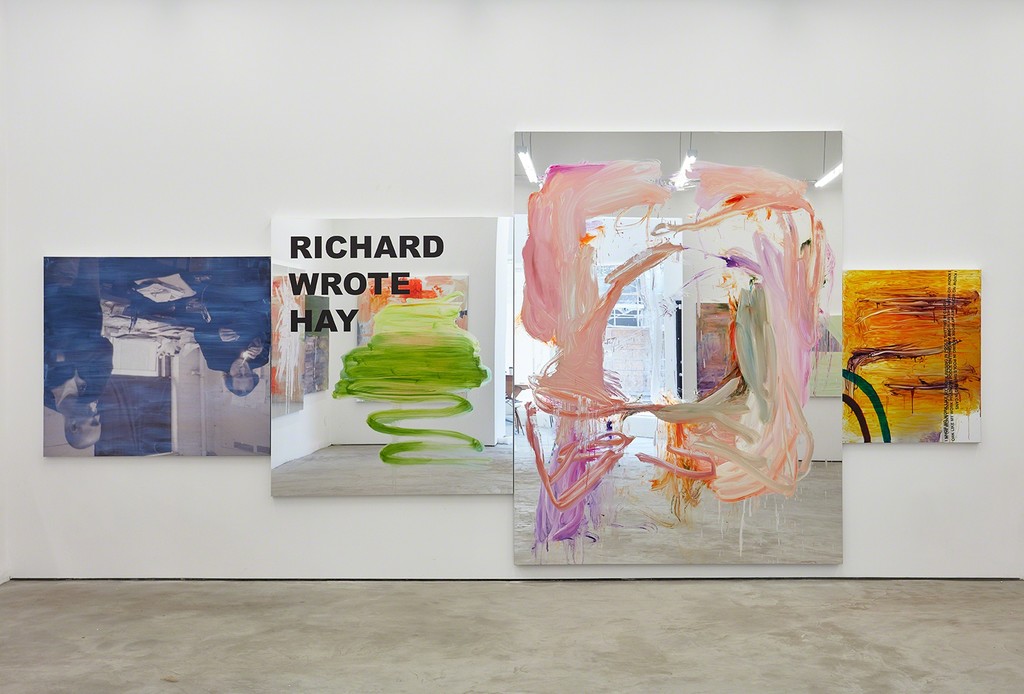 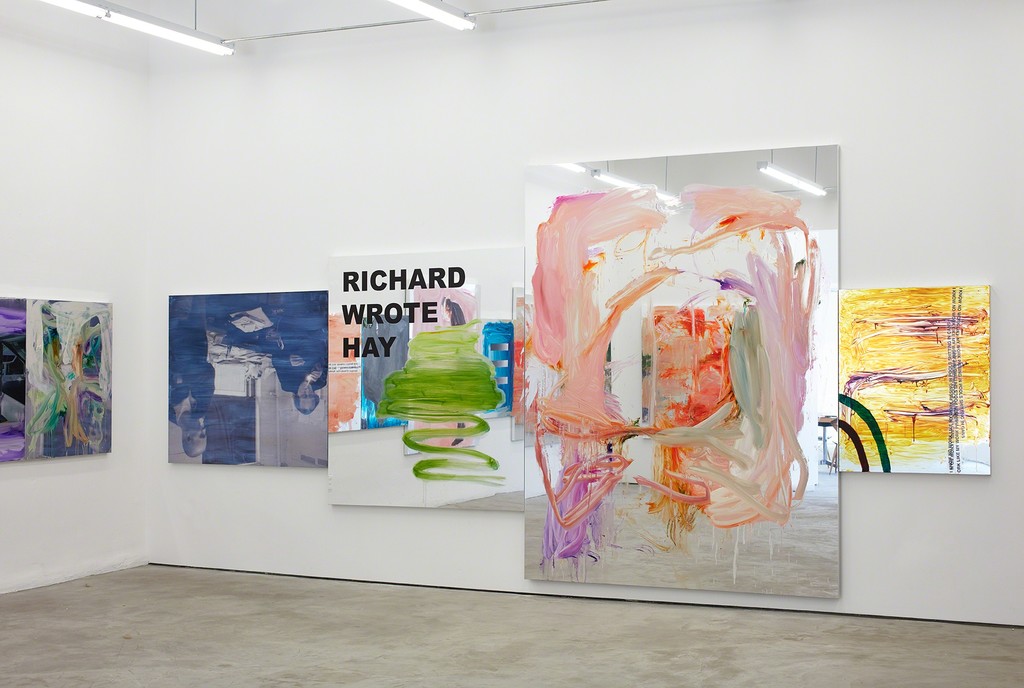 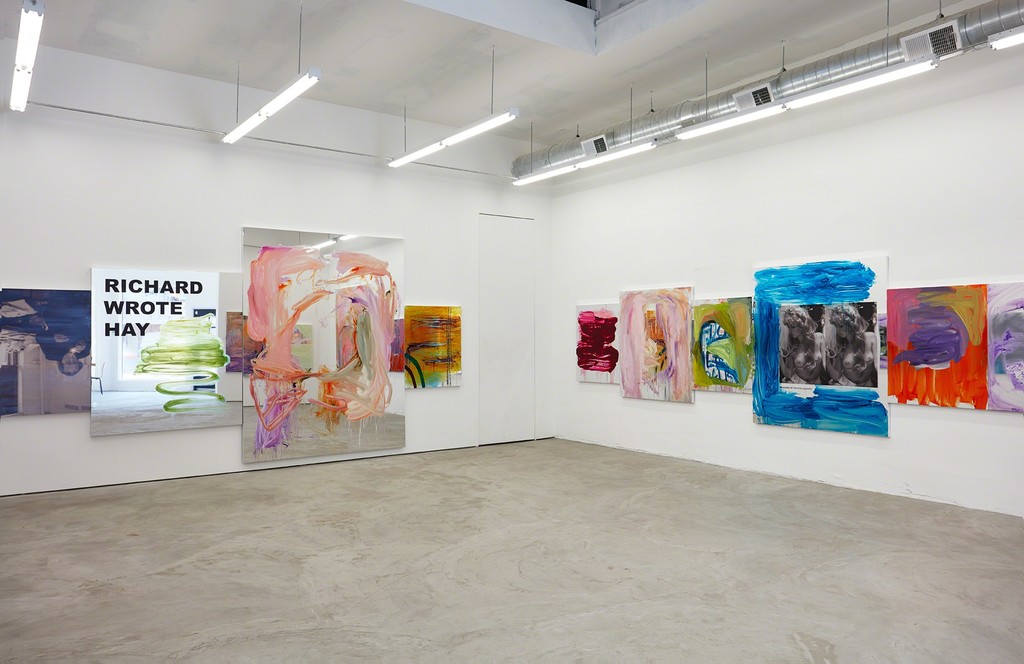 The frenetic energy of Bonde's painterly gestures are dissident and at times self-destructive. Internal spasms made external, the vastly abstract gestures are indeed precisely just that; gestures. Here however we are not referring to what is usually understood to be a kindly exchange between two people, here we are referring simply to the notion of a physical movement that leaves a material residue.

To date, it seems that Bonde's main focus has been to define a frame or surface of some kind, and then to deface it. This iconoclastic act recalls the kind of abandon associated with the excess of a culture imploding in on itself. However, unlike the religious iconoclasm of the Reformation, for example, the temperament of Bonde's image-destruction is one of a much more insular nature rather than it is the product of sectarian deputes. Expanding the notion of painting onto images, it is perhaps arguable that the brushstrokes themselves are not painted upon the mirror (as an object) but upon the reflection itself. A treatment that declares the reflection as an object in its own right rather than a mere representation of the thing(s) being reflected. In Erased Police-pig, for example, Bonde first rendered a Sigmar Polke painting with the intention of erasing it upon completion. This act of creating something that is “not allowed” and then erasing it turns the painting into something else completely. As in many of his works, rather than discard the result, Bonde has clearly chosen to sublimate and embrace this particular choice; to make the mistake the work. This empowering act gives the artist responsibility for his actions: failure is part of the work.

This notion of internal struggle seems to be further compounded when one considers the mirror-foil works in conjunction with Jungian notions of the unconscious. Bonde creates these works by painting directly onto a mirrored surface and again impairs them with his stylistically familiar desecrations. Though some mirrors are still relatively open, many are obscured to the point of barely being able to reflect back anything at all. Bonde has said that there are no illusions in his work, that 'it is all surface' however the constant interplay between the viewer and their reflection (or lack thereof) unquestionably adds a dimension of introspection that, for the viewer at least, implies something that goes beyond ‘surface’ alone.

All this is not to say that the work is singularly dealing with the internal landscape; there is a slew of anti-authoritarian tendencies about the works and, given the current political turn across Europe and America towards more rightwing thinking and legislation, Bonde clearly intends for his protest to be seen. Much like the aforementioned iconoclasts it is not unusual within the artist’s oeuvre to find existing images somehow sullied by the artist's actions. A recent work, however, sees Bonde first creating an image (in this case text of the work's title Fuck Neoliberalism) before partially obscuring it with painterly marks. Like the current wave of social-media based hate statements and ill-informed internet opinions, the amorphous greenish-grey blob that subsumes the sentiments is un-relenting in its brainless suffocation.

In another work I Can Do Nothing for Stupidity (again a wry comment on current political tendencies), the artist has blocked out three rectangles of a mono-chromatic gradient (reminiscent of Ed Ruscha's bleach paintings in which he writes on linen and erases the text with bleach) and surrounded them with slurry of blue brushstrokes. This dichotomy of calm technicality and a more feral energy is, as with the Polke work, part homage and part imaginary dialogue. For Bonde though it is not an attempt to disrespect references and that which they represent, rather it is a bid to alleviate the stoic nature of image and reference from their contexts as representations of something existing in history. He recuperates them as pure objects re-indexed by seemingly random gestures rather than by the rigid categorical classifications that we know them by. Bonde himself refers to this process as ‘mudifcation’, an adjustment that deliberately de-crystallizes the subject (that which is painted onto) into something much less precise and definite in its representation. Something that is now forced to inhabit the muddy and murky waters of the art-object, where visibility, so to speak, is low and where things become slippery and out of focus.

Whether it is existing images, reflections in a mirror, text or simply potential-image-space, Bonde cannot leave it untouched. Why, however, remains unclear. It is these thoughts that personify the ‘other’ within ourselves and this otherness is never more so experienced than when we look into the mirror only to be met by the gaze of the familiar stranger that is ourselves. Or perhaps it’s simply the perfect antidote to the agony of a blank canvas; a good way to begin and end a work with efficiency and thus potentially generating new meaning through the abstraction of the overly-defined.

Peter Bonde (b. 1958) graduated from the Royal Danish Academy of Art (1976-82). He was a professor at the Royal Danish Academy of Arts’ painting school from 1996 to 2005 and represented Denmark at the Venice Biennale in 1999 (with Jason Rhoades). In 1990, Bonde had a solo exhibition at Galerie Sophia Ungers in Cologne where he lived for a period of time. The artist is represented in all major Danish art museums including The Danish National Gallery, ARoS, the art museum Trapholt, Esbjerg Art Museum, as well as Kunstmuseum Wolfsburg, Germany and in private collections Elgiz Collection, Turkey and Axa Northern Stern, Cologne. Bonde lives and works in Copenhagen, Denmark.