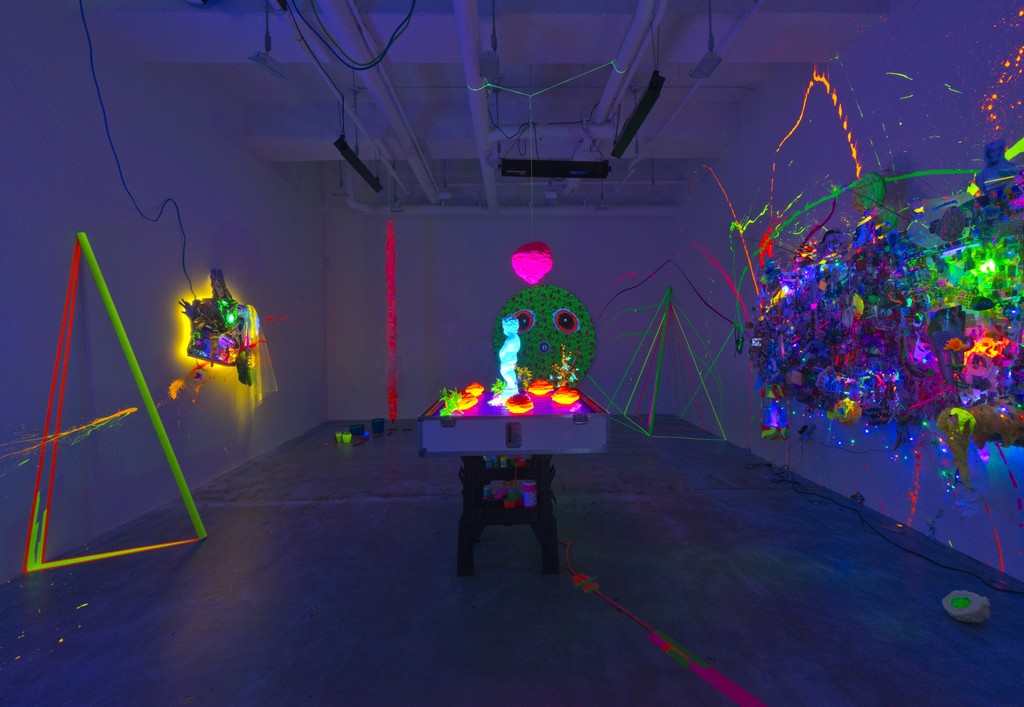 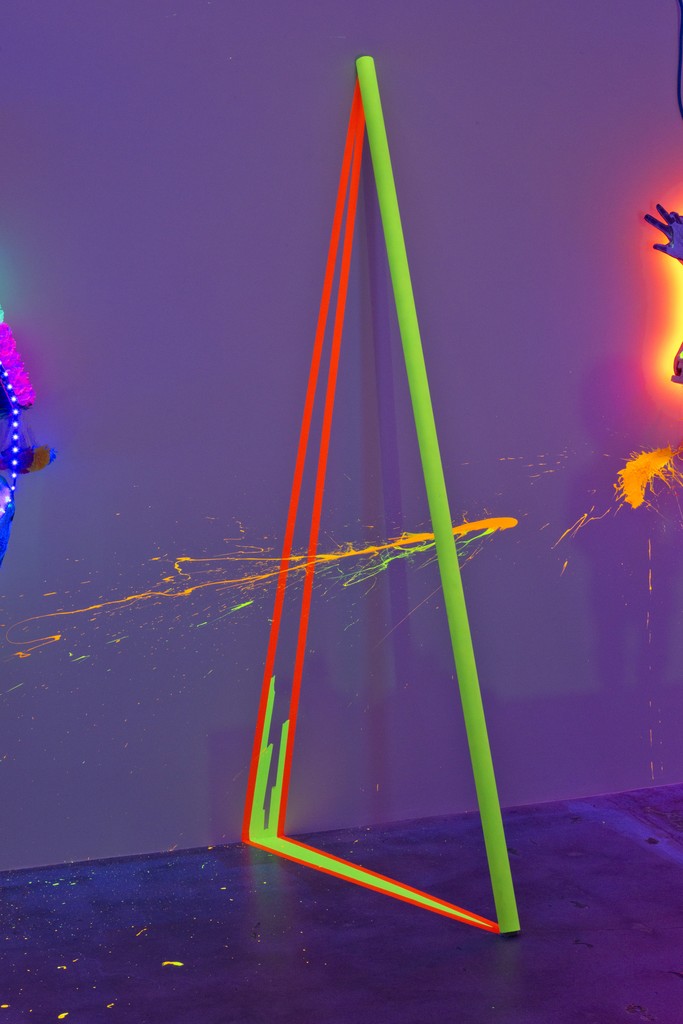 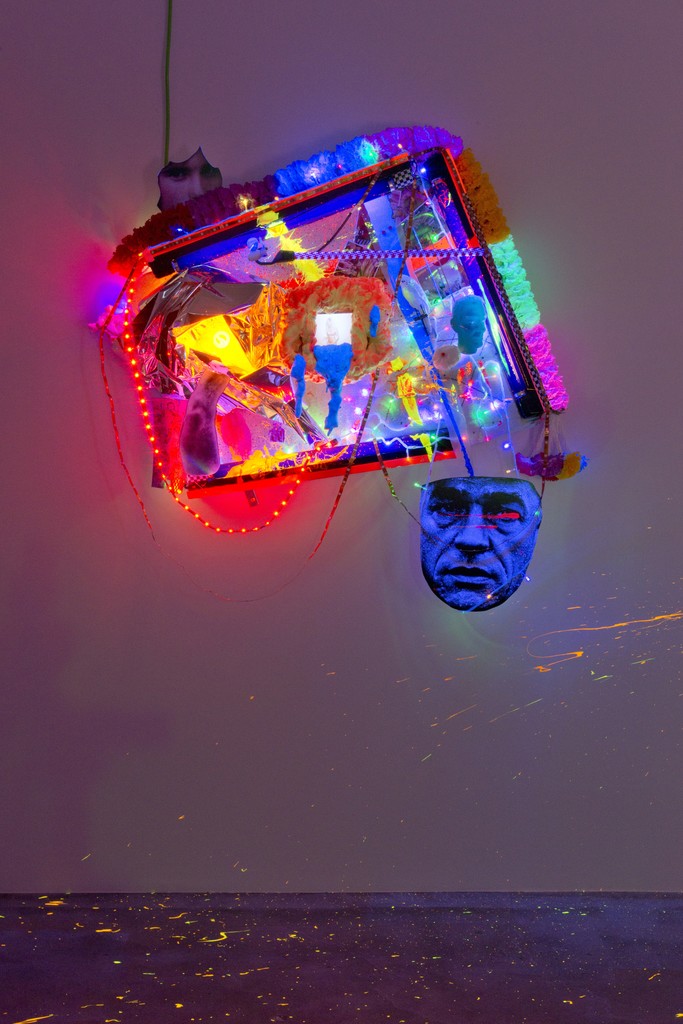 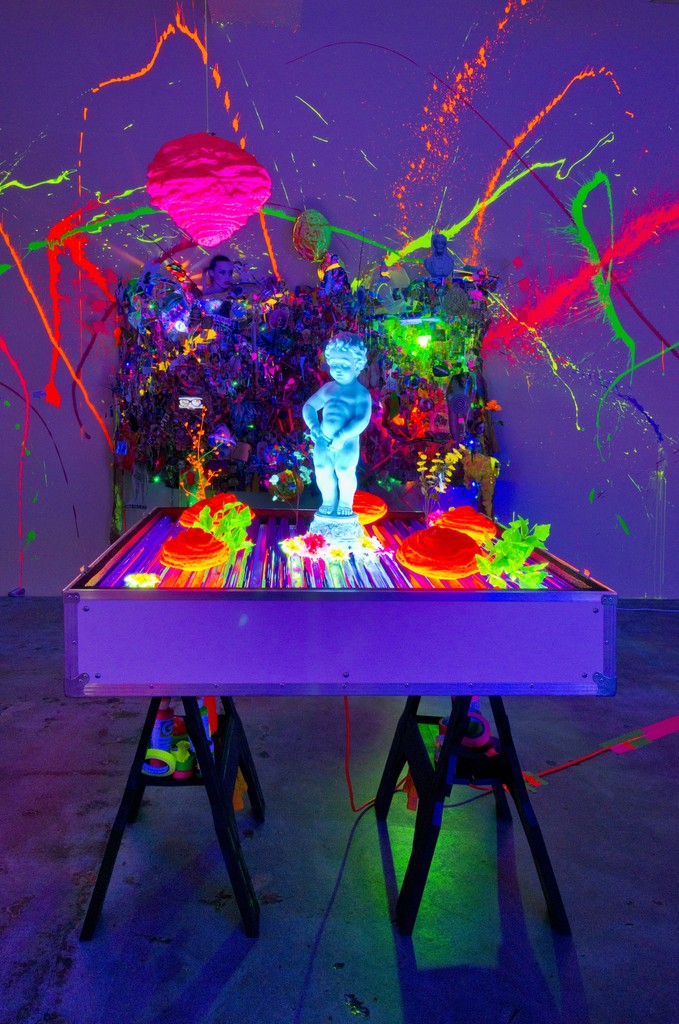 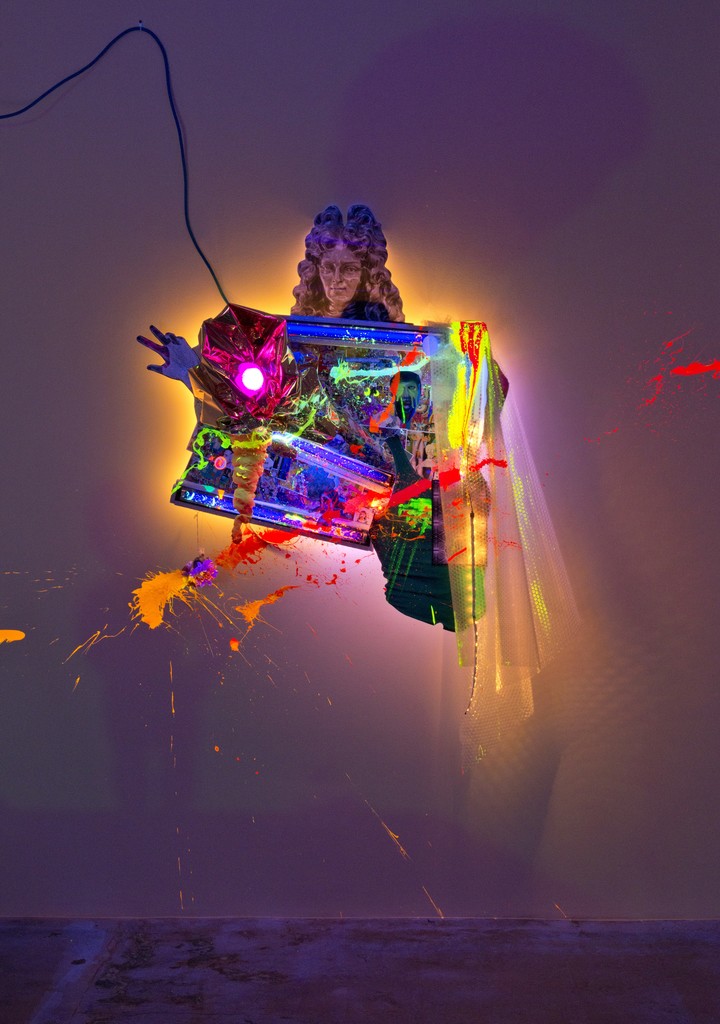 Mike Weiss Gallery is pleased to present a questionable low point in our program: Birth of a Legend, by nomadic artist Cameron Gray. Roberta Smith and Jerry Saltz claim that “Cameron Gray is too big too fail,” and Paddy Johnson of Art Fag City asked for “more cheddar” with her order of Cameron Gray. Gray’s latest exploit serves up a Dionysian smörgåsbord of state-of-the-art digital technology, where kaleidoscopically bright palettes and hypnotic kitsch run rampant. With your senses utterly titillated and suitably doped, you'll discover his artistic touch is as light as his work is raucous; speed of play carefully calibrated, execution satirically dead-pan, and content spot-on HOT. Straddling the line between comfort and the disquietingly uncanny, Gray’s gargantuan installations flash, blink, twirl, and pulsate off the walls in utter pandemonium, culling visual and auditory white noise from the vast Internet in something akin to a holy art apocalypse. As Gray descends into the deepest realms of the web world, we can only look on and marvel at the chaos that we have created.

Frequently likened to the second coming of Koons and thoroughly rooted within postmodern sensibilities, Gray is an incredibly articulate forager of the irreverent. In I Was Made For Dancin’, All, All, All Night Long, Gray achieves near tantric nirvana, emblazoning a glossy, hollowed Leif Garrett poster with psychedelic patterns and prismatic forms; two all-seeing eyes flicking every which way as he sluggishly sings the work's eponymous and utterly cheeky song. Acid Zen Garden imbues a glowing cherub figure and assorted fauna with Gray’s unrivaled knack for mischief. Like-wise, in Ice Cream for John Wayne, a duo of melting waffle cone treats take residence upon John Wayne’s dreamy visage. Not content to simply tear the 'mask' off such iconic machismo, Cameron spatters many a surrounding wall with fluorescent, glow-in-the-dark paint—effectively taking on Abstract Expressionist bravado as well.

A shaman of digital technique and reprographic means, Gray sets forth an alternate universe rife with under-auto black lighting and over-the-top pop, instinctively splaying nonsensical sights and sounds across an ambitious range of mediums: video collages chock-full of outlandish abstractions, including an all-encompassing 12 foot wide work comprised of 27 monitors; an epic 7-foot-tall pin bricolage in which 3,000 photographic images abut embedded 3-D video, spinning disco-lights, and utterly unrelated bric-a-brac; manipulated c-prints of classic American icons; and circular, Archimboldo-like smiley-face sculptures in which fake food is adhered to densely-patterned, wood-mounted table-cloths, with fake plastic 'turkey dinners' forming the eyes of one piece, and a glazed faux Jell-O mold its nose. Simultaneously chaotic, organic, orgasmic, and narcotic, Gray delivers the Cadillac of collage, the epitome of hyper-stimulation, and the ultimate state of transcendence – a meaningless yet tantalizing void, where nothing is sacred. Indulge yourself this summer in this orgiastic, optical feast and celebrate with us the 10-year anniversary of Mike Weiss Gallery.

Cameron Gray, Birth of a Legend.

Born in Geneva in 1980, Cameron Gray lives and works in London, Basel, and Los Angeles. Graduating egregia cum laude from Bruce High Quality Foundation University, Gray also holds no less than six degrees from such prestigious institutions as Yale, Columbia, and UCLA. Prior to his ascension into the upper levels of the art historical pantheon, Gray will have participated in two Venice Biennales, including the one to take place in 2015, and three Whitney Biennials, including those in 2016 and 2018. In 2012, Galerie Eva Presenhuber included his work in the seminal show I Wanna F*ck You But We're Just Gonna Cuddle, and one of Gray's massive pin collages was a show-stopping success in The Gag Reflex is Mysterious at the Santa Monica Museum of Art in 2011. Grey's work is included in the Ludwig-Forum für Internationale Kunst in Aachen, Germany; the Kaohsiung Museum of Fine Arts in Kaohsiung, Taiwan; the Yale University Art Gallery in New Haven, CT; and 17 other prominent collections. Cameron Gray is currently represented by Mike Weiss Gallery, David Zwirner, Thaddaeus Ropac, Sprueth Magers, White Cube and Pace Beijing, amongst others.

Your mom loves Cameron Gray's work. Ask her, she told us so.