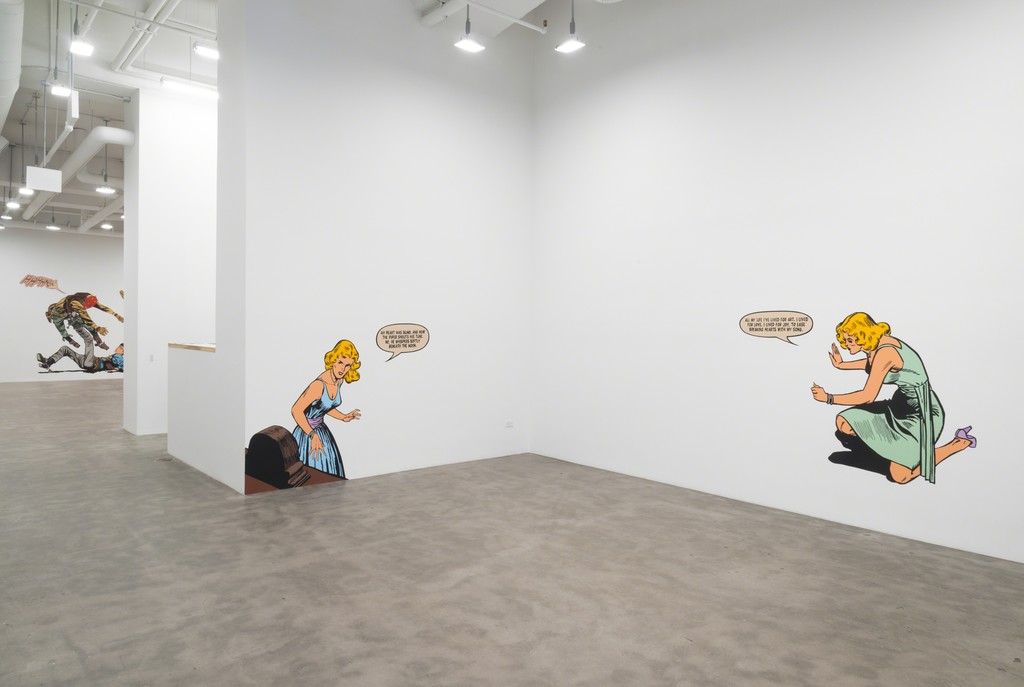 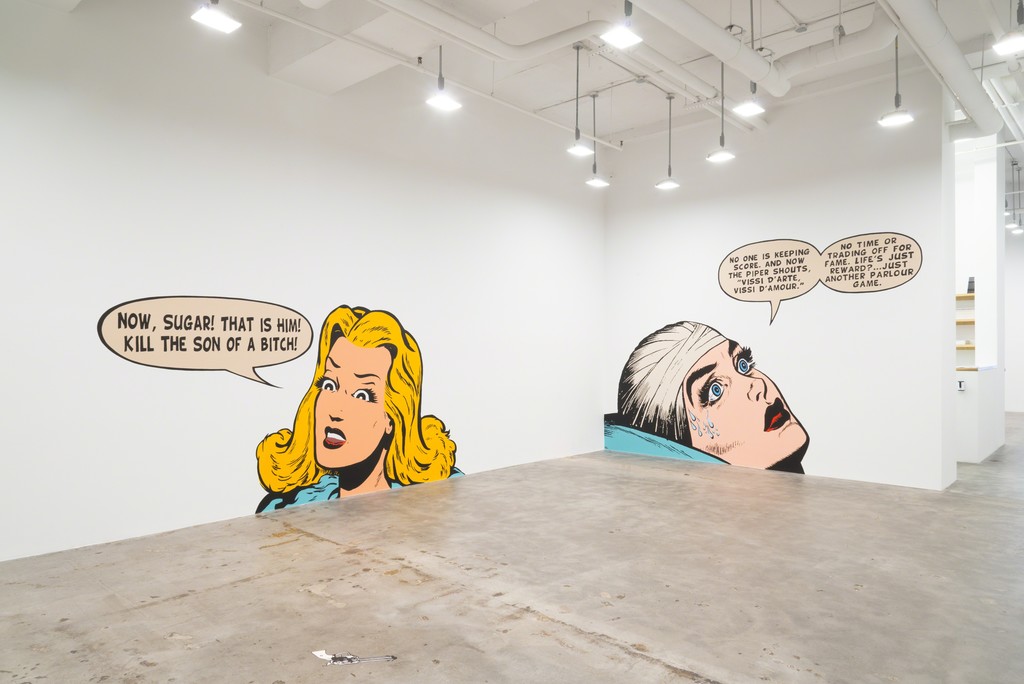 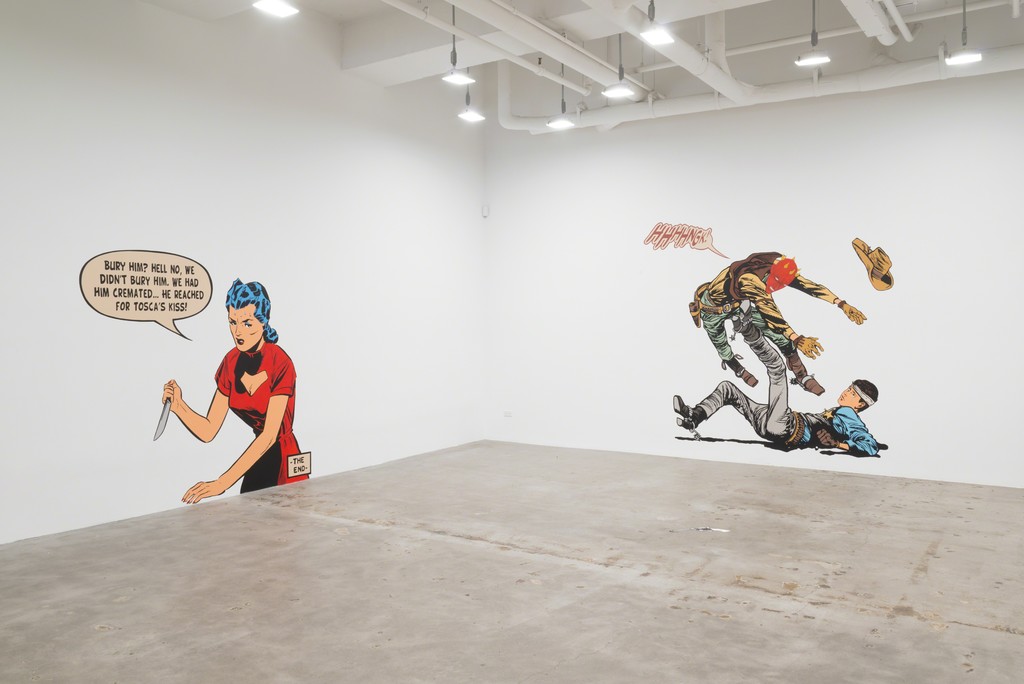 Mike Weiss Gallery is pleased to present Diva’s Song, the second show by Jerry Kearns and the first in collaboration with singer/performer Nora York at the gallery. The exhibition features eight acrylic wall paintings of larger than life size characters as high as eight feet, seemingly out of a comic book, with thought bubbles that form a coherent yet ambiguous narrative. Merging his own “psychological pop” aesthetic with York’s rendition of “Vissi d’arte” from Giacomo Puccini’s Tosca, Kearns and York have reimagined the aria, isolating it from the operatic masterpiece and widening its narrative scope to encompass all the intrigue, drama, and emotional weight of a full length story. Without the restraints of a canvas edge, the gallery becomes transformed into a democratized space – a stage where viewer and art, and reality and metaphor, play equally important roles.

The show begins with a theater banner that introduces the title character “Diva” as well as her gun-wielding cowboy boyfriend “Sugar”(or painter, if we’re following from Tosca). The cinematic effect continues from here into three “shots” of the lone diva. Thought bubbles like, “Oh why, oh why, oh why, oh why, does this burden lay so heavy on my mind? Oh why, oh why, oh why?” take us into a vulnerable moment of existential anxiety, as if the distant future became suddenly, alarmingly immediate.

The searching, introspective tone of the first room comes to boiling point in the main gallery space, visually evoking an operatic crescendo with a stark increase in scale. Two monumental close-ups – one of a tearing and/or perspiring victim and the other of a strong, enraged agent – create an emotional and psychological battleground that ultimately turns violent. In the ensuing clash of good versus evil, Jesus and his crown of thorns are disconcertingly absent. Instead, we find Sugar, on his back and with a bandage around his head, in a fracas with the devil, whose own head, curiously, is the only realistically-rendered in the show. Unlike Puccini’s Tosca, the exhibition’s narrative outcome is ultimately uncertain. Definitely, however, the knife-wielding diva, in a stance reminiscent of Judith with the head of Holofernes, is the one in control.

Infused with Kearns’ archetypal cowboys, bad guys, and damsels, Diva’s Song inherits traits from the Spaghetti Western as well the opera. But perhaps the lineage can’t be so neatly partitioned. Throughout their careers, Kearns and York have had a seemingly compulsive attraction to montage, brazenly pairing the head of Jesus with the body of the cowboy (in Kearns’ paintings), or cleverly sampling the chord structures of Puccini with Pop melodic overlays (in York’s songs). While in both cases these amalgamations may initially seem discordant, their underlying foundations always reveal their harmonies. Diva’s Song operates in that same vein, translating various modes of representation – opera, film, and comic book illustration – into a single cohesive exhibition of wall painting.

Jerry Kearns has exhibited internationally across the Americas, Europe, and Asia since the 1980s. His work has been written about in The New York Times, Art and Auction, ARTnews, and Artforum, among others. Kearns’ paintings are included in many public and private collections, including the Museum of Modern Art (New York), National Galerie (Berlin), Brooklyn Museum (New York), Art Institute of Chicago, and Whitney Museum of American Art (New York).

Nora York has four CD’s in release and has performed in concert venues, universities, and festivals across the United States, Mexico, Canada, and Europe, including Lincoln Center Out of Doors, Merkin Hall, Newport Jazz Festival, Ottawa Jazz Festival, JVC Jazz Festival, and many others. Her work has been reviewed in publications such as The New Yorker, Village Voice, JazzTimes, and Billboard Magazine. York will be performing Diva’s Song at Joe’s Pub at The Public Theater on Wednesday, July 29th at 7 PM. For tickets visit www.joespub.org.

Jerry Kearns and Nora York are married. The couple lives and works in New York City.