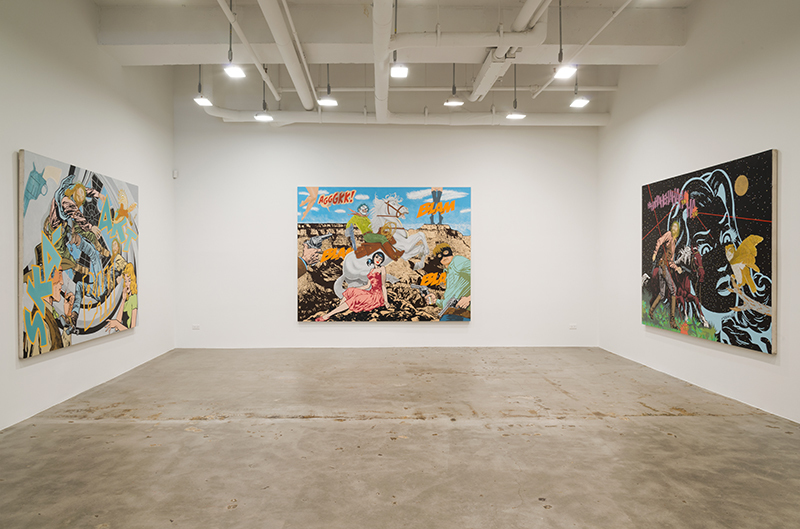 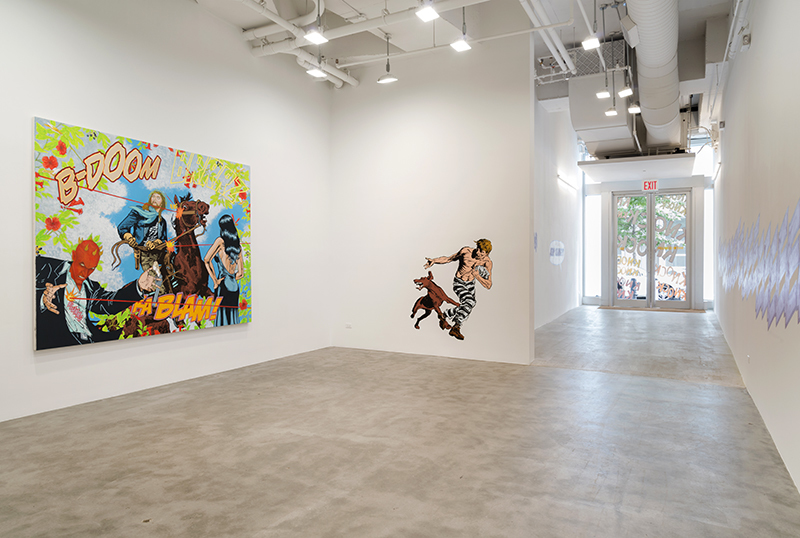 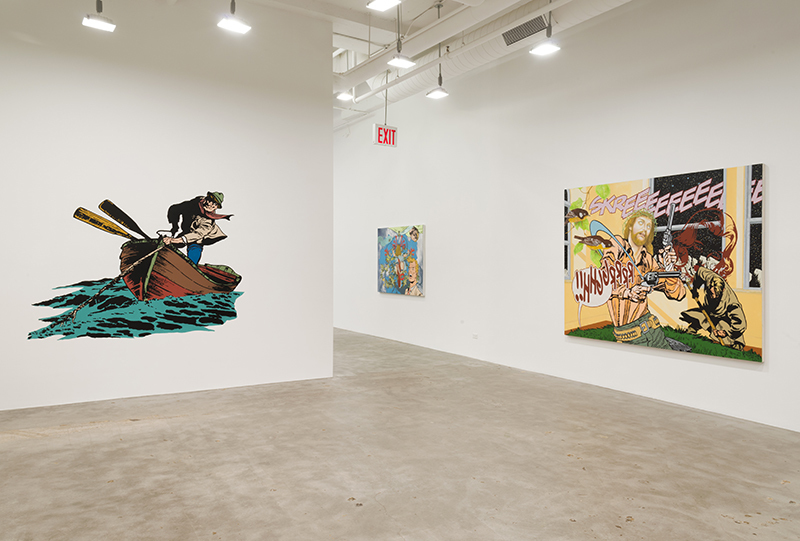 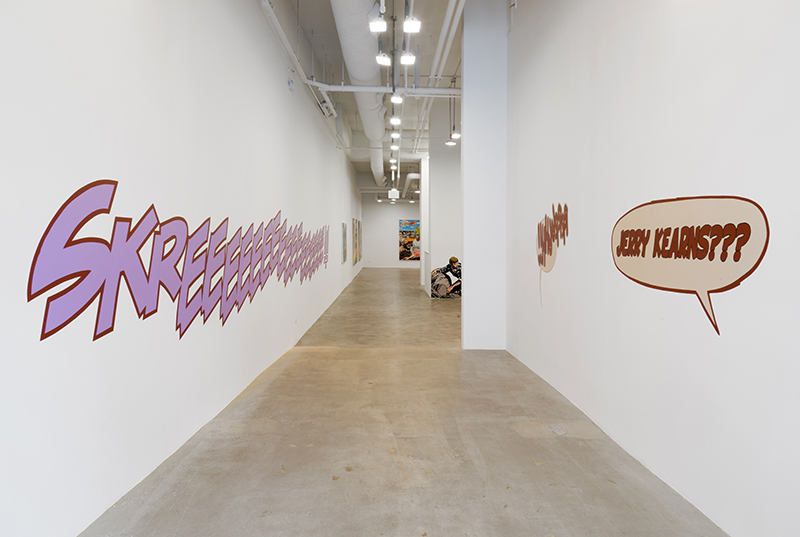 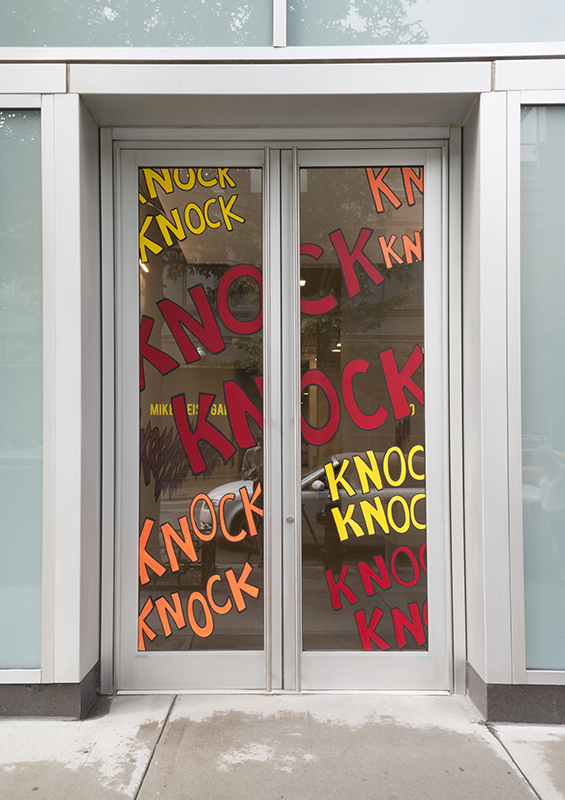 “Back in the 1960s, I played football at the University of New Mexico. Vern also played for the University. A big heavy man, Vern was not a great looking guy. He looked like a TV detective, Kojak, played by Telly Savalas. Vern always had great looking girlfriends. I couldn’t see why him, not me. I asked for his secret. Vern smiled, looked over his beer, and said, “The mind, you’ve got to get the mind. Tell them a good story; the body will follow.”

Mike Weiss Gallery is pleased to present RRRGGHH!!!, Jerry Kearns’ first solo exhibition with the gallery. This will be the artist’s first show in New York since 2006, and will feature 8 new paintings on canvas as well as 5 wall murals. RRRGGHHH!!! restages the elemental conflict between hero and villain in the template tradition of this type of narrative, good versus evil, begun over 2000 years ago with The Book of Revelations and continued in different iterations today. The paintings present a layered dreamscape inhabited by a recurring cast of characters that have their roots in both the artist’s personal and our public histories. The narrative is organized around scenes from a hero’s journey, the hero himself an amalgamation of some of the most influential archetypes in culture. Each painting is a confrontation with one or more dangers, but the interpretation is widely open to discussion, while clues and misleading evidence are left on the canvas for discovery. These paintings reposition familiar images in a universal vocabulary, presenting a destabilized perception of our culture.

“I attempt to reflect possibilities and other notions about reality when I structure a painting. I want to encode contemporary beliefs about our experience. Like the discovery of perspective defined the Renaissance, collage and its relation to relativity have defined our vision.”

Coming from a working class background, Jerry earned a reputation as a political artist in the 1980s with the advent of his Psychological Pop paintings, the most recent editions which are featured in RRRGGHH!!! Along with Lucy Lippard, he was one of the figureheads in PAD/D (Political Art Documentation and Distribution), an archive later acquired by MoMA that is just now being revisited by critics and historians as an honest snapshot of the political landscape at that time. His involvement in political organizations along with the general atmosphere in the mid/late 80s opened up lots of opportunities for Jerry’s pragmatic approach to making political artwork, leading to solo exhibitions in New York at famed socially-minded venues like EXIT ART, and earning him the nickname ‘the Cultural Commissar’ for his ability to lyrically render hot button issues.

“In our time, nature (that is our direct, real-time experience) has been virtually replaced by mediated information. We risk becoming corporate avatars. Beware ya’ll: the Matrix is real. Not too far down the line, we could all be like TV Cat Fish, gliding along, trawling the waters, out looking for a little love.”

Jerry’s work can be seen as history painting, charting our collective cultural mythology over the passage of the last 30+ years. His paintings employ the essence of Pop Art by using recognizable imagery culled from our culture, like the Jesus/Cowboy who was created from a 1950s cartoon and a projection of Bible belt realism. Instead of placing the characters in their typical environments, he uses the vocabulary and familiarity of pop culture imagery as a tool for analyzing the world around him.

“I believe pop imagery was where we found the story fragments we used to invent ourselves. I reasoned I could take such fragments, reposition them, change their context, and talk about culture. In short, I wanted to make a snapshot of my response to the reality around me.”

The Jesus/Cowboy is at once the outsider and the hero. He often seems lost in the action, looking the wrong way, or looking toward heaven even when danger is imminent and arriving in another direction that we, the viewers, can see unfolding. The animals in these paintings seem to know more than the protagonists do about reality. Good and evil are constantly at odds, and danger lurks everywhere. Each painting is layered with meanings, constructed so as to ask questions but evade answers.

“The power to describe is fundamental to establishing meaning. Art is about preserving the right to self describe.”

The narrative in this exhibition appears semi-coherent, familiar, and threatening to fall apart as it unfolds. Escaped prisoners are painted directly on the wall to create a didactic clash of literal versus symbolic space. These characters are closer to the actual space we live in, adding a new dimension for encounter. The exhibition plays out like a movie, unwinding its narrative through scene after scene - a painted, epic film still. The stylistic tendenceies of his work speaks to the integrity of his practice and vision by allowing us the opportunity to encounter characters we know in an unguarded way, often at dynamic moments in their fictional universes.

The paintings are influenced by the artist’s childhood filled with cowboy movies and serials, newspaper cartoons, comic books, and the colorful illustrations his Preacher showed him in the Bible while growing up. In his work, Jerry is interested in exploring the fundamental relationship revealed in current exercises of power through imagery. Former President George Bush’s polarizing economic and political strategies, which were no relief after Reagan’s trickle-down economic policies, also play a role in the narrative. Jerry saw George Bush’s appropriation of the male archetype of the Cowboy realized in his approach of government policy.

“In 2004/05, George Bush was President. He brought the Cowboy back to run Dodge City. George played President Bush as Reagan’s smartass son. I flashed that George was about my age: He must have seen the Paul Newman flick, HUD, when he was a teenager. As President, Bush swaggered his drive-in movie version of HUD, the toughest leader in the world. Later, Putin would play a similar character in Russia.”

Spectable, fable, fantasy; all are present. Jerry’s work explores identity as we know it, identity as created daily through the mediated information we encounter and then use fragments of to appropriate and fabricate our best selves. The objects and characters in his paintings exist in a field of information, rife for further exploration and dissection. We can each point to characters that relate to our personal experiences, but never in such a surreal, psychological, and timely situation.

“This image is my effort to show you how it felt to be alive in the time and place I was.”

Jerry has exhibited internationally across the Americas, Europe, and Asia since the 1980s. His work is featured in The New York Times, Art and Auction, ARTnews, and Artforum, among others. His paintings are included in many public and private collections, including the Museum of Modern Art (New York), National Galerie (Berlin), Brooklyn Museum (New York), the Art Institute of Chicago, Whitney Museum of American Art (New York), and many others. Kearns lives and works in New York City.