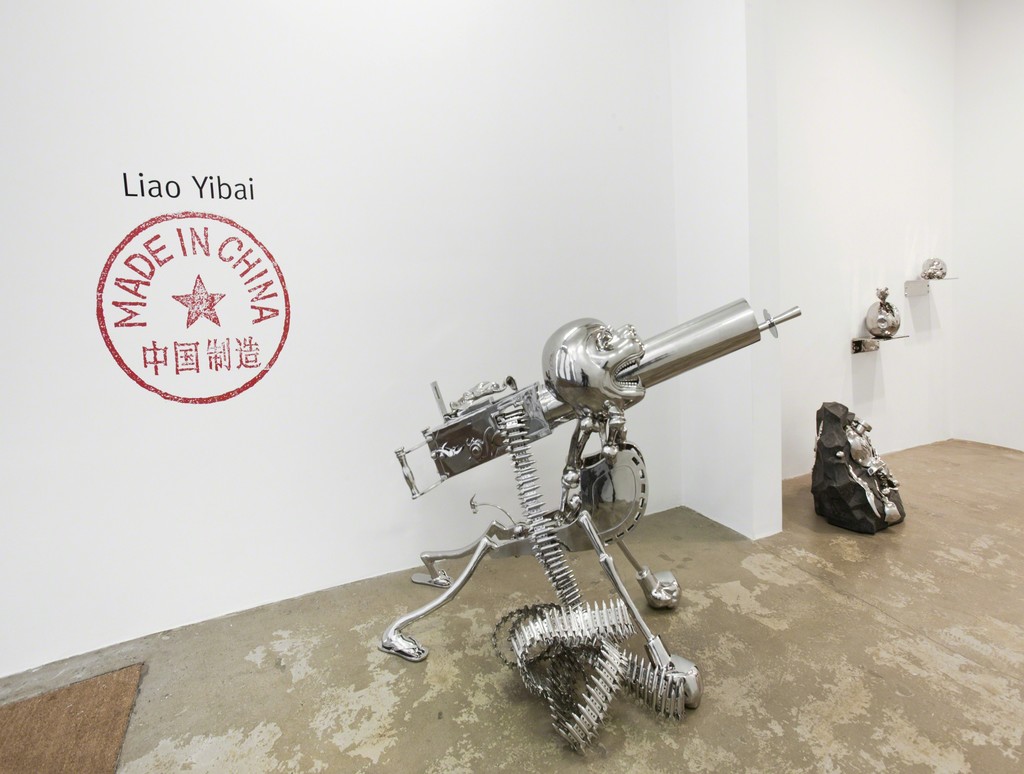 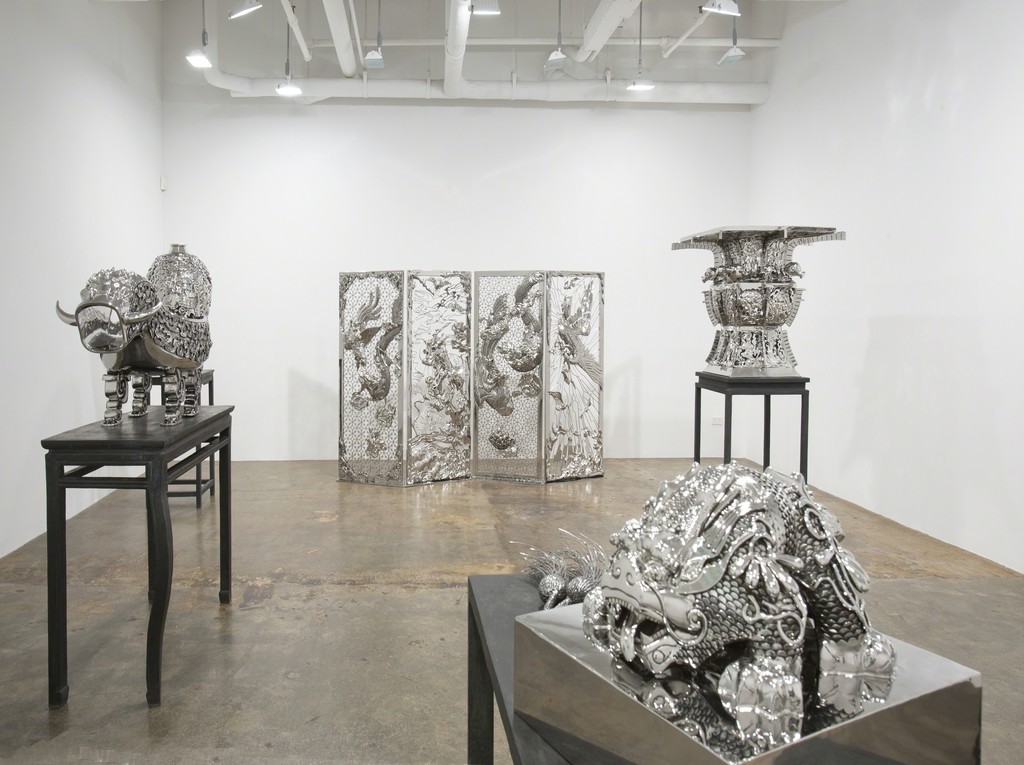 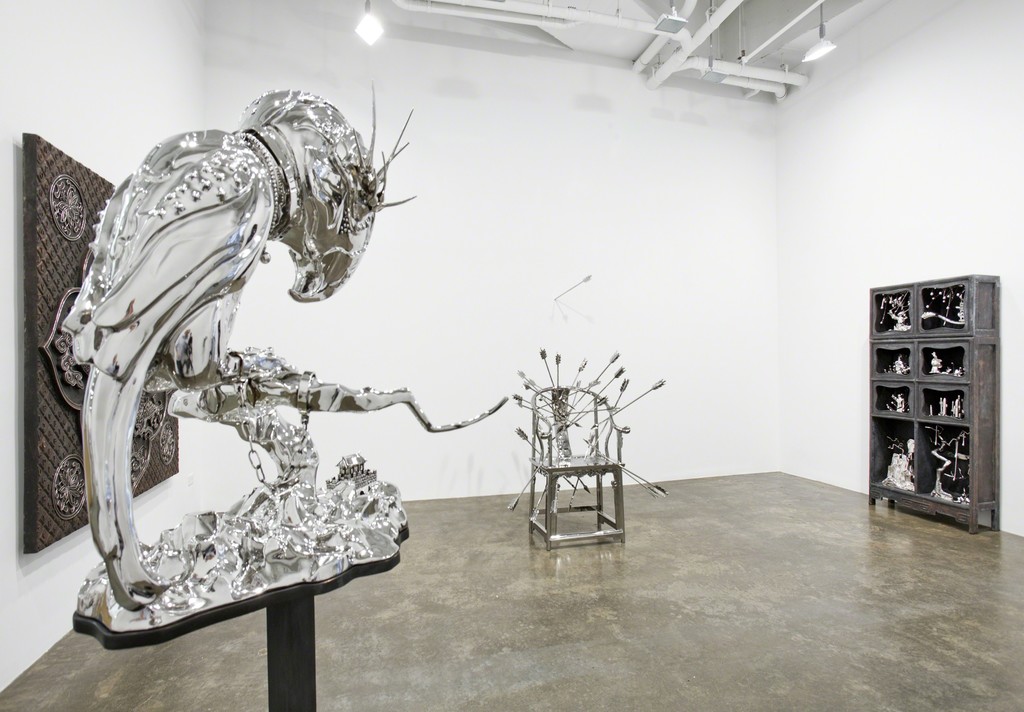 Mike Weiss Gallery is pleased to present MADE IN CHINA, Chinese artist Liao Yibai’s third solo show at the gallery. Inspired by China’s lucrative fake antique industry, twenty plus hand welded stainless steel sculptures displayed on “antiqued” pedestals tell the artist’s version of China’s rich history through three unique series: Fake Antiques, Fake Evidence, and Legends. The title MADE IN CHINA is not only a reference to the origin of the works and the traditional Chinese objets d’art that inspired them, but also to the ubiquitous “MADE IN CHINA” tag which adorns a majority of goods imported into the United States. By producing innovative fakes, Yibai exposes the value of truth.

Yibai replicates treasures from the Ming, Qing, Yuan, and other dynasties as he marries ancient forms with pressing contemporary issues in his Fake Antiques. Embellished with playful characters from his previous series, often donning slippers and boxing gloves, large vessels such as Ding, Dragon Vase Ocean, and Dragon Vase Earth are emblazoned with nuclear clouds, swine flu viruses, and acid rain in a beautiful visual tango with traditional lotus and dragon motifs. Chairman’s Chair, a life-sized throne riddled with arrows, is the artist’s wry summation of 5,000 years of China’s history and its constant struggle for power.

Yibai’s ironic story telling continues with his Fake Evidence presented in the form of dragon and panda eggs, skulls, and dinosaur fossils. In Panda’s Egg, a cracked egg hatching a panda bear sits in an intricate nest of twigs, while Dinosaur’s Fossil shows an entire family of dinosaurs tangled with diamonds. Alluding to the false sense of security one feels in accepting what is presented as factual archeological evidence, the artist goes to great lengths in attempting to prank future museum patrons.

Parrot, Chinese Legend and Machine Gun belong to the Legends series, in which Yibai recontextualizes well-known Chinese mythology to tell cautionary tales, like the story of the emperor’s famed talking pet parrot that has outlived the emperor and is passed onto the emperor’s son. The parrot serves as a lone witness for the past emperor’s acts, both good and bad. In an effort to silence the truth, the emperor’s surviving son chains and binds the parrot’s mouth shut in a literal attempt at censorship. Chinese Legend, a large Ming style cabinet, sets the stage for great myths and tales, such as the adventure of the Monkey King, the ill-fated story of the Butterfly Lovers, the building of the Great Wall and the Cult of Mao, to name but a few. It is a gleaming tribute to the splendors and trials of China, as well her majestic landscape that is now under threat.

“Liao’s museological hoax is the latest in his irreverent, irresistible series of ‘Real Fakes’ that, coming full circle, end as they begin as independent works of art, rather than fake.”

–Lilly Wei. “The Real Fake Annals of Liao Yibai,” in MADE IN CHINA catalog

Liao Yibai graduated from the Sichuan Academy of Fine Arts in 1997. His work has been exhibited extensively throughout China, United States, and Europe. Yibai currently lives and works in Chongqing, China with his wife and daughter.