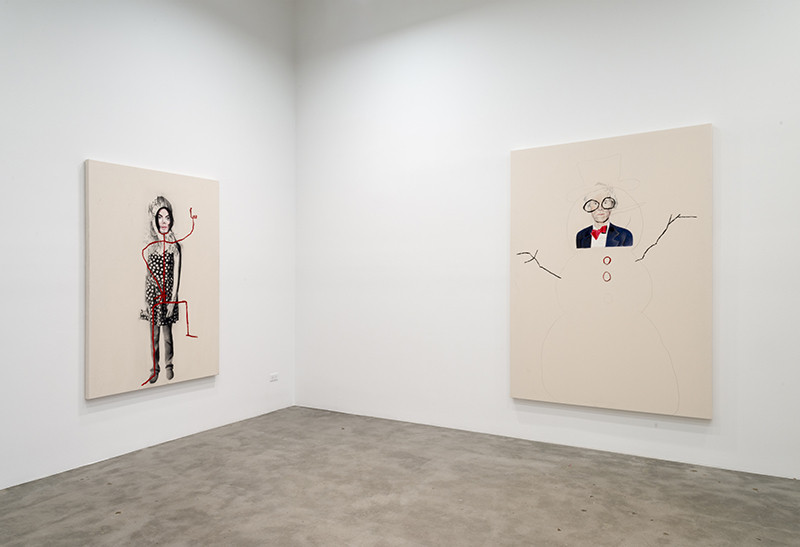 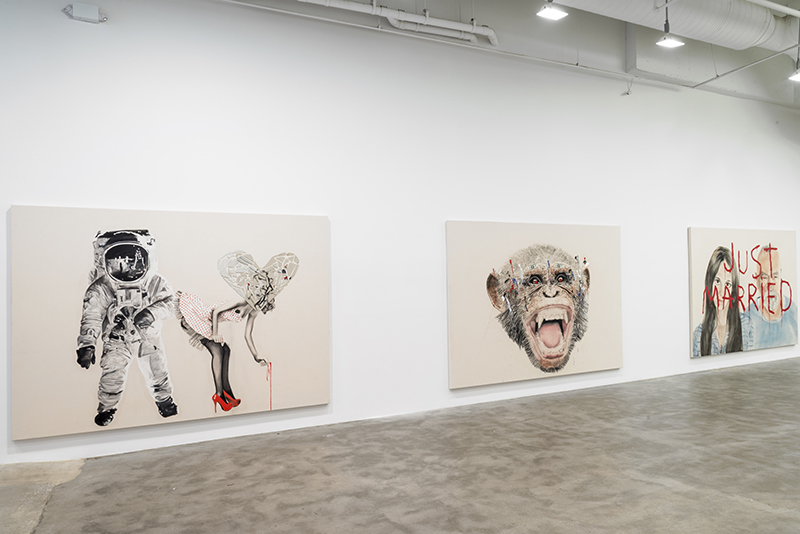 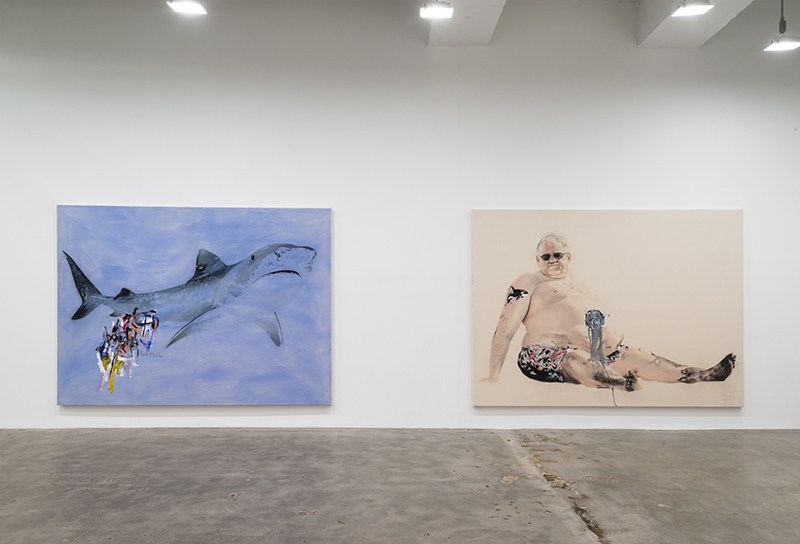 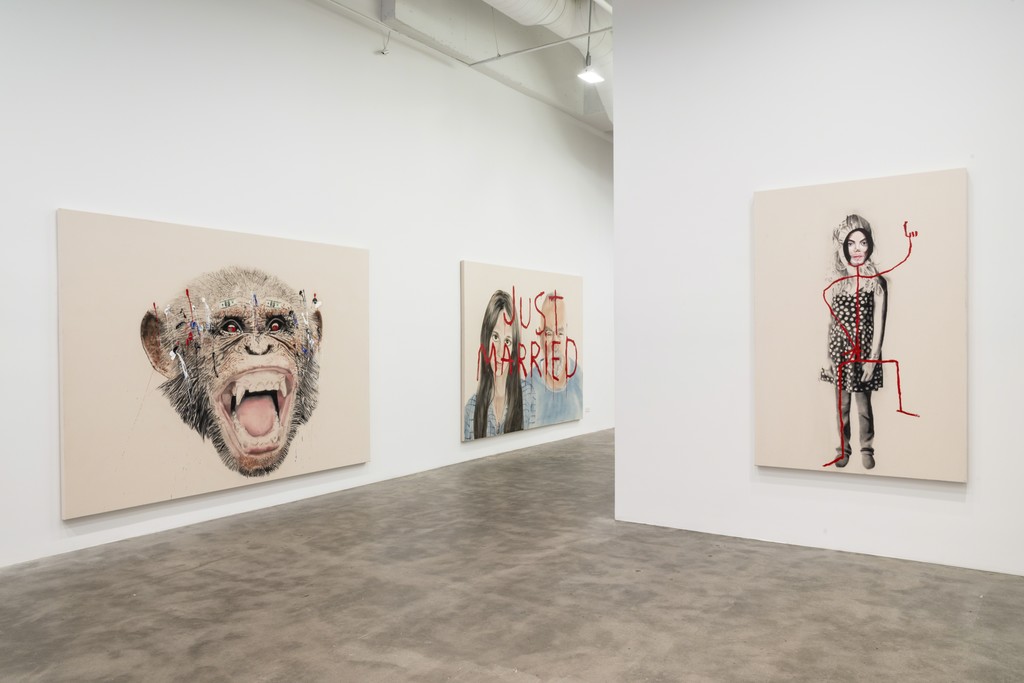 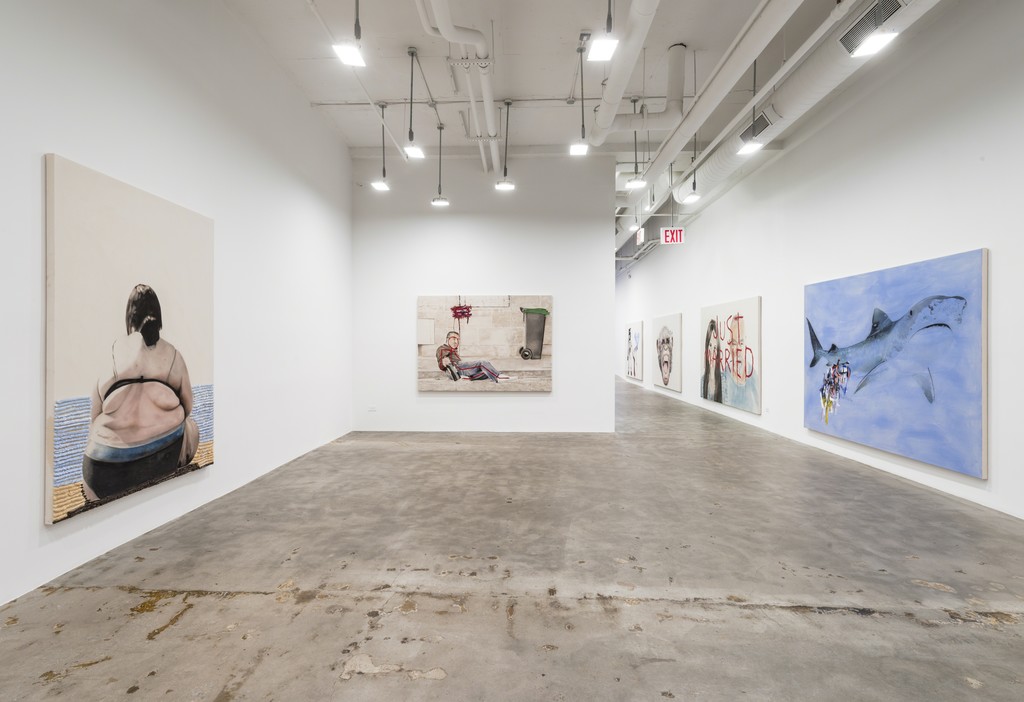 Mike Weiss Gallery is pleased to present Marc Séguin’s third solo show with the gallery, I Love America and America Loves Me. The title references Joseph Beuys’ definitive 1974 performance where Beuys spent three days in a room with a coyote after being transported from the airport while blindfolded and not once touching American soil. He explained, “I want to isolate myself, insulate myself, see nothing of America other than the coyote.” This experimental sentiment is echoed in Séguin’s recent painted snapshots of America, reflecting on the prerogatives of our cultural empire and the right of individuality we use as a defense for our actions. Each painting, primarily in oil and often supplemented with soft charcoal, uses devices and visual tools to separate the storied, social, and cultural identity of the subjects from what is hiding beneath the surface - leaving the good, the bad, and the ugly as memento mori.

The lurking issues present in Séguin’s subjects’ lives are provoked by their own use of individuality as a means of carving a cultural niche. Many of the subjects use the guise of individualism as an excuse for behavior even when it is misleading or harmful. The characters in the exhibition, like Andy Warhol or Elvis, are known for their prolific egos and eccentric and definitive personalities. Michael Jackson, for example, is featured juxtaposed over a child with a red line-drawing tracing his form. The line-drawings, reappearing throughout the exhibition, function as mechanisms pointing to the fragility beyond the characters’ façade.

Many of the subjects in I Love America lack symbolic meaning because of their repeated appearences in culture that ultimately dull their resonance. Séguin is very interested in the ongoing attention paid to serial killers. In one painting, 80-year old Charles Manson appears next to his 26-year old bride, staring at the viewer with the words JUST MARRIED in dripping red paint, obscuring his swatstika tattoo, and mimicking the pig blood smeared on the walls of the infamous compound during Manson’s reign of terror. This eerie wedding portrait is self-mocking, a theme that also appears in a portrait of Elvis wielding a paint brush, complete with a crown he has painted on his head.

Séguin chooses his characters based on whether their “cycle is completed,” as many of the characters have lost their personal identities and now their image is based on social context. Séguin’s paintings render his subjects, once of mythic proportions, as vulnerable and challenged beings regardless of the audacious social constructions surrounding their empire. The viewer is left to come to their own resolution about how to perceive the characters when they are unpacked with painted devices hinting at a deeper understanding of our cultural icons.