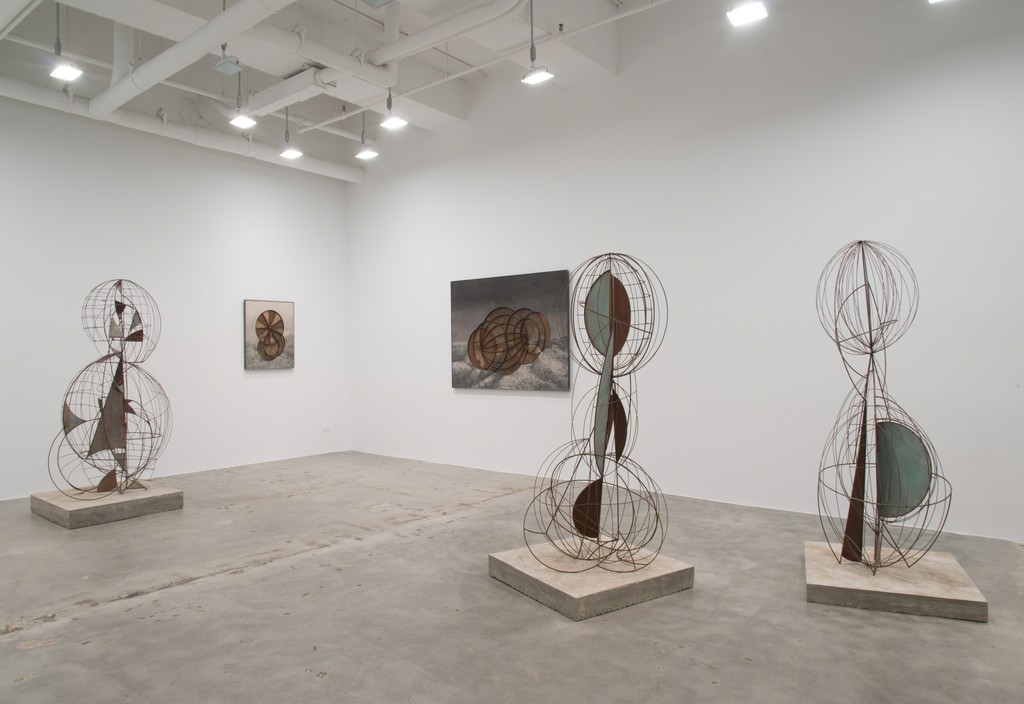 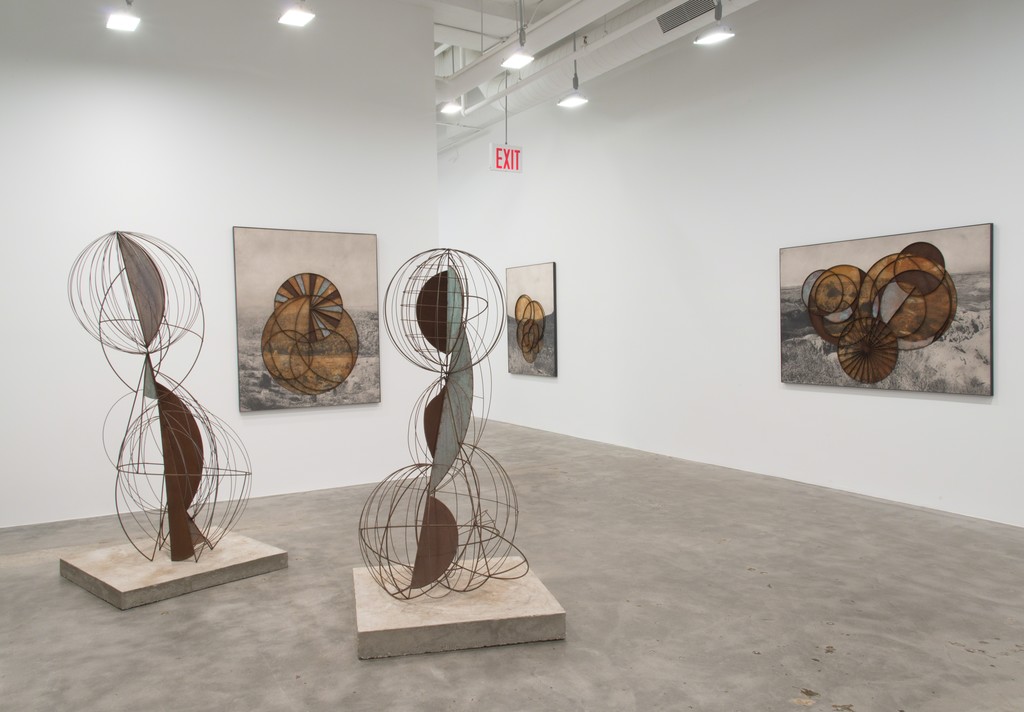 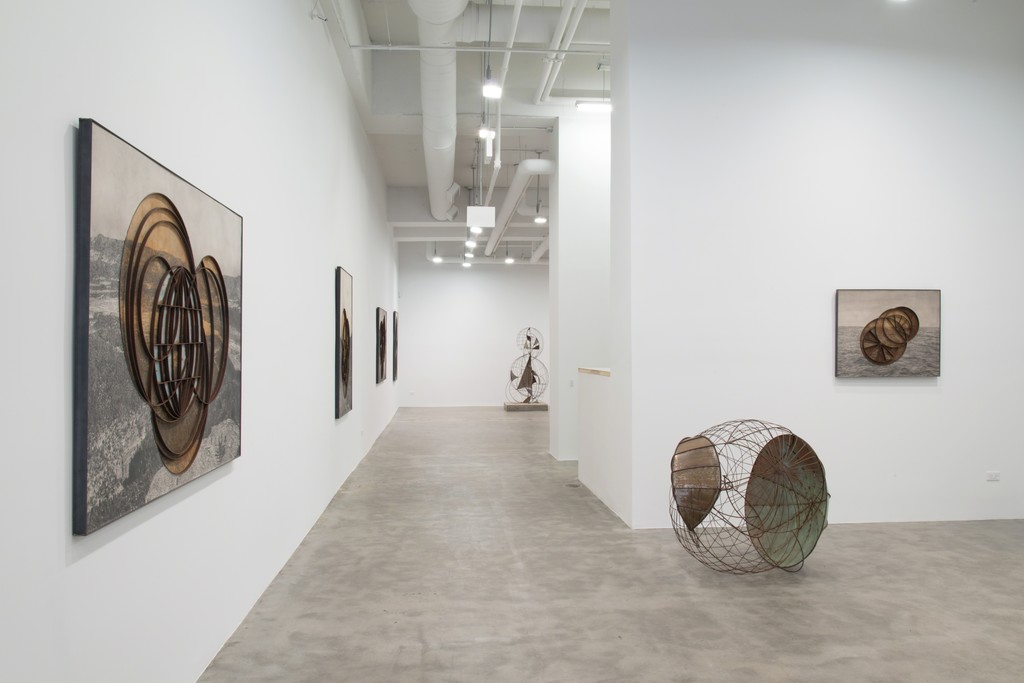 Mike Weiss Gallery is pleased to present Schematics and Silhouettes, Michael Brown’s first solo exhibition with the gallery. Employing rusted steel rods, oxidized copper, and graphite illustration, Brown presents a dynamic corpus of sculpture that reexamines our relationship with industry and culture in the vein of arte povera. At the intersection of art, science, nature, and architecture, these microcosms echo both cellular and solar framework, seemingly infinite and yet entirely self-contained. Utilizing nostalgia as a vehicle for retrospection and social awareness, each model urges mindfulness in a world of constant evolution – serving as remnants of history while pointing to our collective future.

In past installations, Brown presented banal household objects made from melted pop vintage vinyls by the likes of Elvis Presley and Johnny Cash, as well as a Coney Island scene strewn with stainless steel lawn chairs and crushed beer cans. Addressing the socioeconomic challenges rooted in his own New York geography, these exhibitions brought to light cultural norms, modes of production, and populations now displaced, while tapping into a broader analysis of environmental impact. Now, in his newest body of work, Brown presents a collection of skeletal sculptures and three-dimensional wall-mounted tableaux that bring together the same minimalist aesthetics and formal qualities of design, refined in form but ostensibly didactic.

In prototype I, Brown’s perspective play pits common experience and collective memory against personal histories. Sourced from national park archives and executed to near photographic perfection, its graphite and ink sketchwork recalls the entrancing, textural paintings of Vija Celmins, rendering vast, untamed expanses of terrain. Inlaid with the same bulbous, dome-like sculptural forms found throughout the gallery space, the work envisions massive structures built into the landscape and recalls the synergetic work of Buckminster Fuller, perhaps embodying its own never-realized blueprint. As the receding horizons of mountain ranges, rolling plains, and tumultuous oceans push and pull away from their sculptural counterparts, Brown explores notions of space, zooming in and out on our past, present, and future.

In model for cell skeleton we encounter mechanomorphic, seemingly utilitarian forms that recall dwellings or primitive instruments, reminiscent of the architectural designs of Martin Puryear, or antiquated navigational instruments – compasses, sundials, and charts that stir our intrinsic desire to claim territory and orient ourselves. Reintroducing a sense of organic chaos found in nature, we find steel rods bursting from a single point, weaving through space, and scaling the human body – tenuous, malleable materials seemingly in the midst of transformation, like a cell moving through mitosis. Brown reminds us that what is manmade borrows its shape from the most basic forms of life, transcending his minimalist predecessors with a palpable human aspect. In an homage to simpler times, Brown poses questions of shifting cultural paradigms, forgotten histories, and their social impact.

While Brown’s sculptures are distilled and geometric, they are not austere. Warm and dignified through their heavy patinas and familiar framework, their configurations take on utopian idealism, akin to ancient shrines or euphoric stained glass windows. There is a cycle of artifice versus nature triumphantly in reverse, like abandoned buildings reclaimed by nature. They are simple yet complex, motionless yet dynamic, ephemeral yet resilient; a fusion of seemingly disparate materials which optimistically find symbiosis.

Michael Brown (b. 1982; Poughkeepsie, NY) lives and works in Long Island, New York. He received his BFA from SUNY New Paltz in 2006 and was quickly inducted into the forefront of the contemporary art scene at the age of 25, showing alongside the likes of Rachel Whiteread, Walid Raad, and Adel Abdessemed. Between solo shows at Yvon Lambert and group shows with Zwirner & Wirth, his work has been reviewed to critical acclaim by heavy-hitters such as The New York Times and Artforum. His work is included in both public and private collections around the world, including The Beth Rudin deWoody Permanent Collection in New York, The Hudson Valley Center for Contemporary Art in Peekskill, NY, the Rennie Collection in Vancouver, Canada, the collection of Sherry and Joel Mallin in New York, and The Eileen S. Kaminsky Family Foundation in Jersey City.