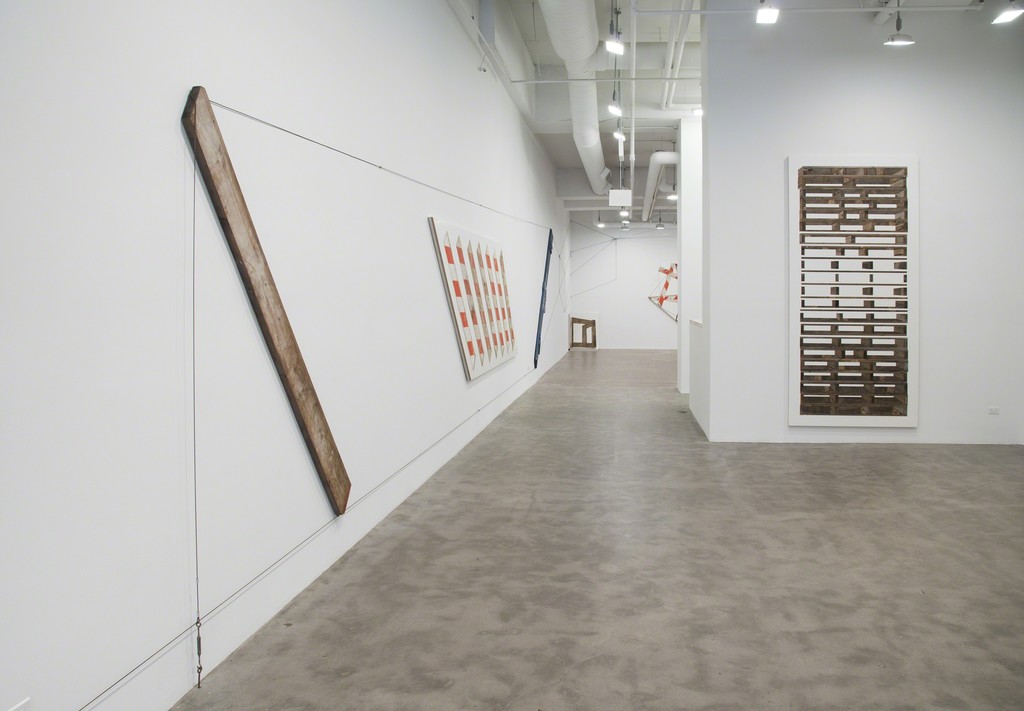 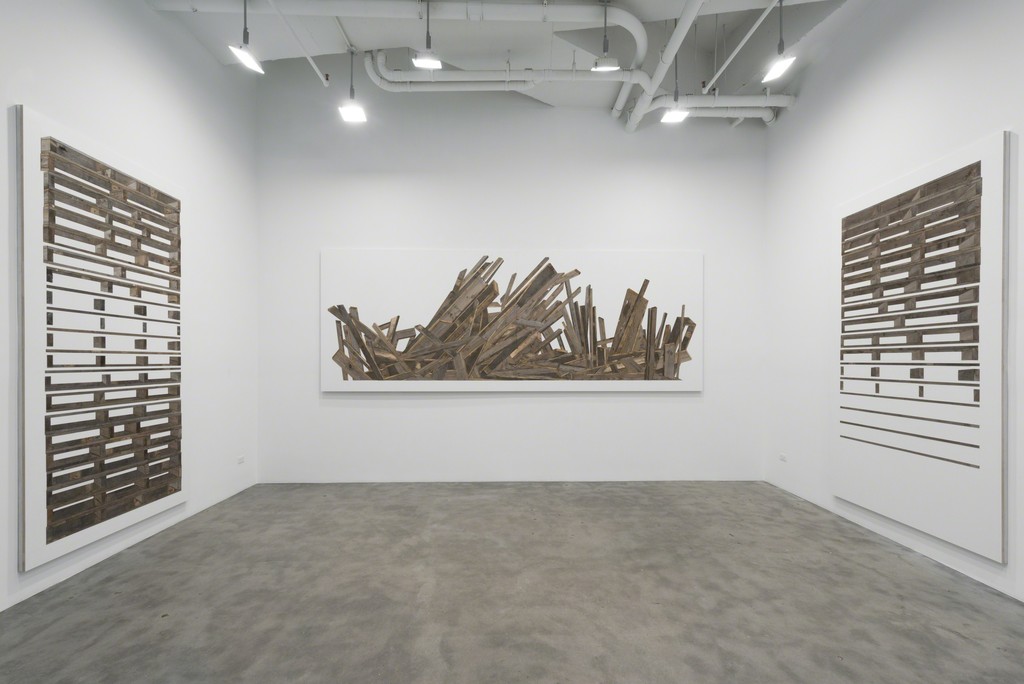 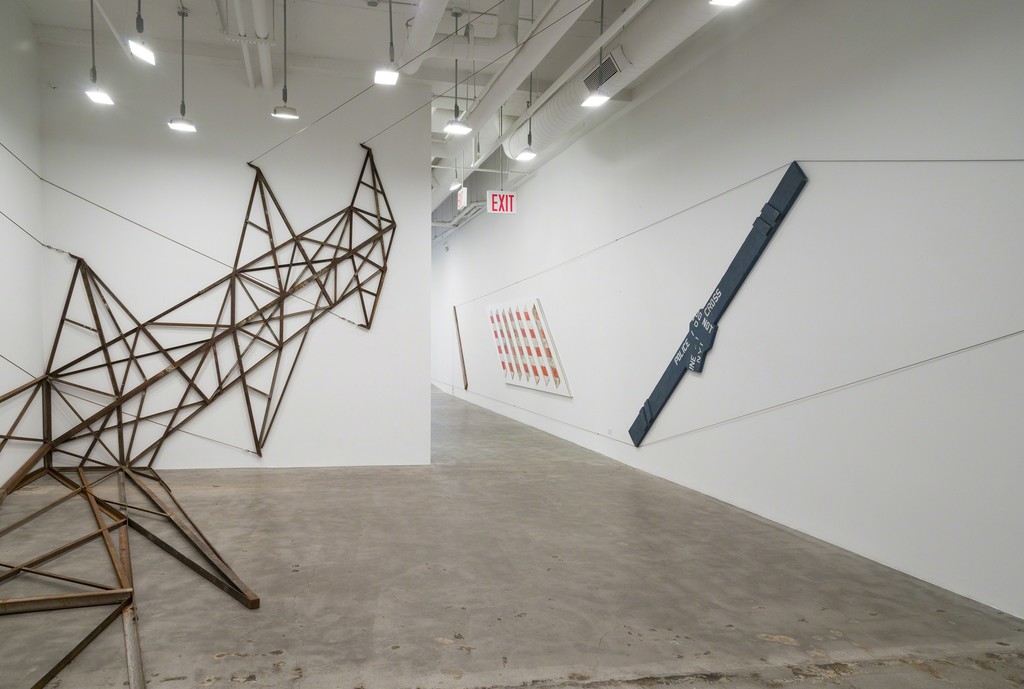 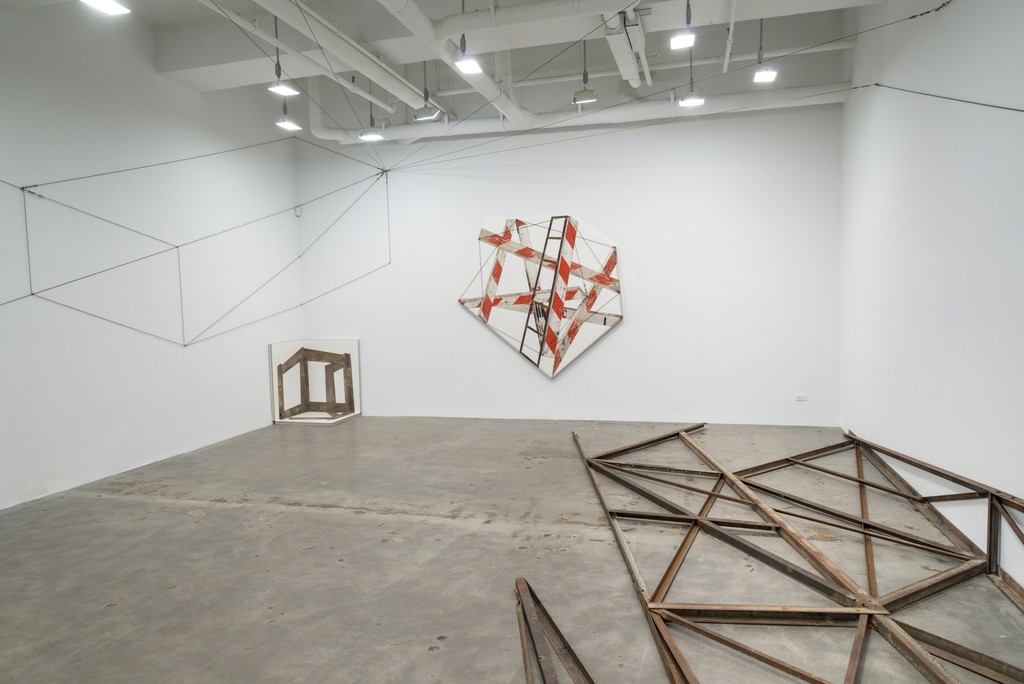 Mike Weiss Gallery is pleased to present New Order, the first solo exhibition by Michael Zelehoski with the gallery. Zelehoski takes found three-dimensional objects like pallets and police barricades and restructures them into two-dimensional space. The resulting works are not mirrors of the objects but instead examine and challenge the selective process of human perception in its most abstract and creative tendencies. By working somewhere in between the separate domains of sculpture’s core dimensionality and painting’s historical flatness, Zelehoski’s work also mixes in the formalist ethos of emphasizing composition. The exhaustive process of metamorphosis in Zelehoski’s work fluidly moves between fully-formed objects and binary abstraction, pursuing the possibilities and intricacies of perception.

The carefully engineered distortions in Zelehoski’s work give the original objects a significance beyond their humble backgrounds. Even after he restructures the object into its new iteration, it still bears the unique scars of time. The only linear narrative present in New Order is relayed by the power of the details in the objects and their secret, rich histories evident in the unaltered surface qualities that Zelehoski intentionally reveals and celebrates. New Order contains works made out of materials found in places along the East Coast, all chosen for their untapped potential. Prominently featured in the exhibition is an electrical tower collapsed in purposeful angles, antithetical to what we know about electrical towers. The new formation becomes an abstract composition engineered to provide a different perspective outside of what our brains immediately infer. Components of reality, like wires running off the tower mimicking our real-time perspective, help us quantify what’s in front of us.

The exhibition also features work that bisects the picture plane, moving from the flat plane of the wall to protruding into our individual space. Other works tower over the viewer in precarious assemblages that seem to defy gravity while stuck in an impossibly frozen moment of collapse or formation. Rehabilitation, reincarnation, and transformation run through the entirety of Zelehoski’s oeuvre. Besides the obvious process of reconstitution of found objects, the work also examines what happens when an unpretentious object from reality is reappraised and injected with aesthetic implication.

Michael Zelehoski lives and works in Beacon, NY. His last solo exhibition in New York was with Dodge Gallery. The Pompidou in Paris recently acquired Open House (2012), his largest work to date.