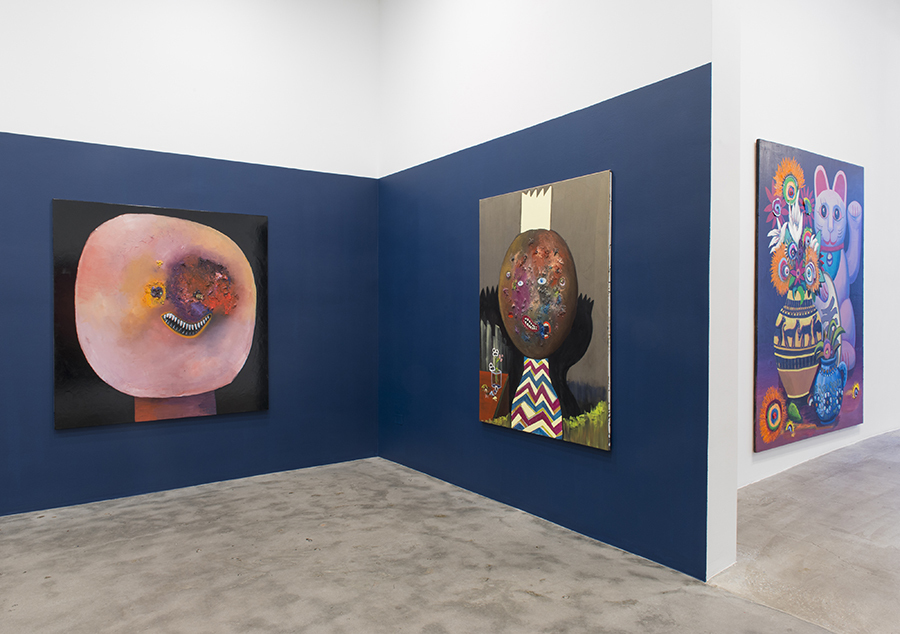 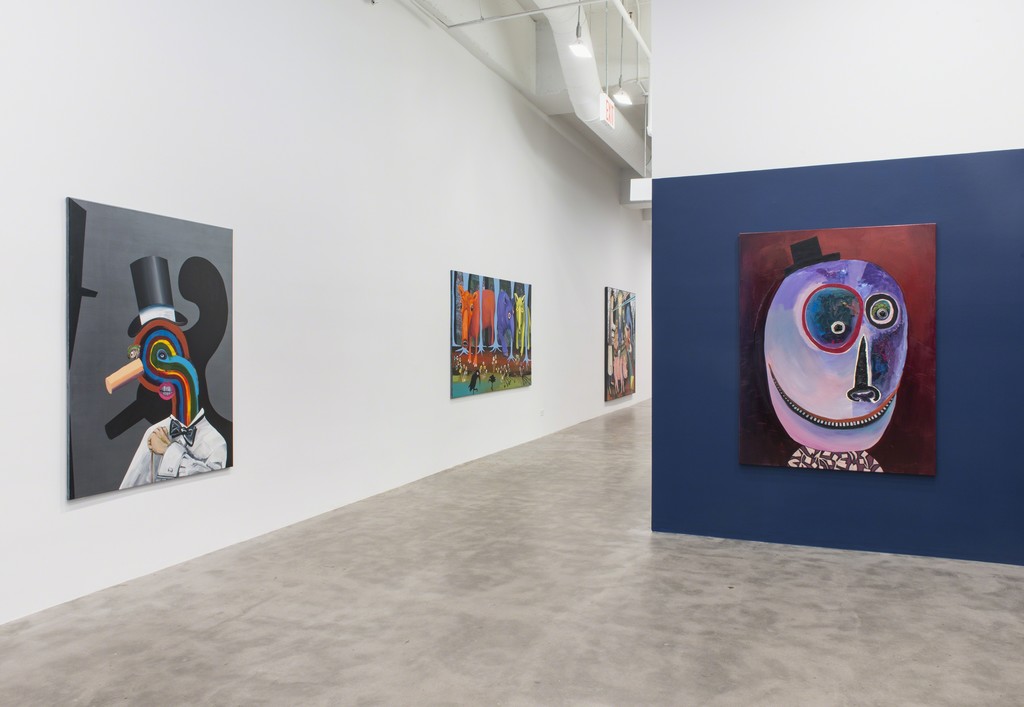 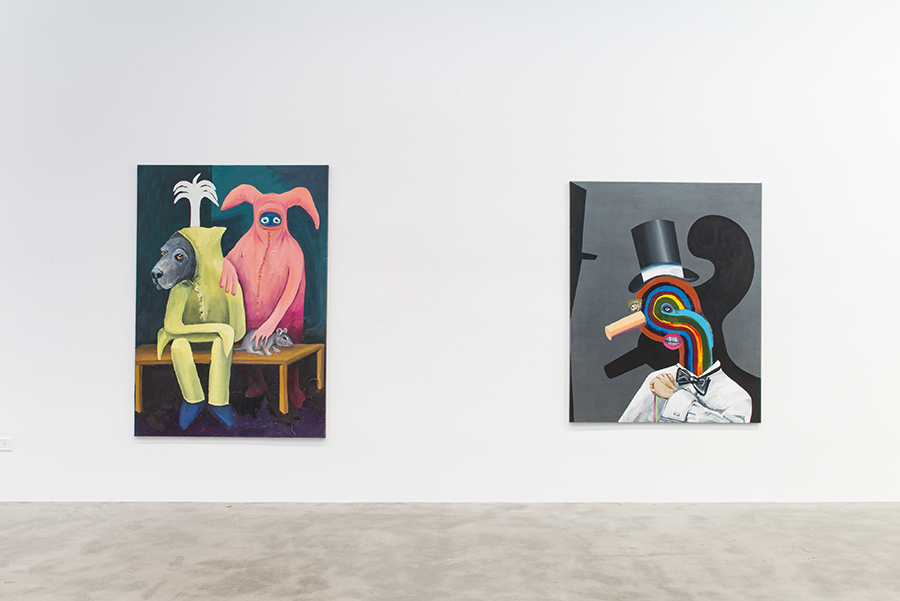 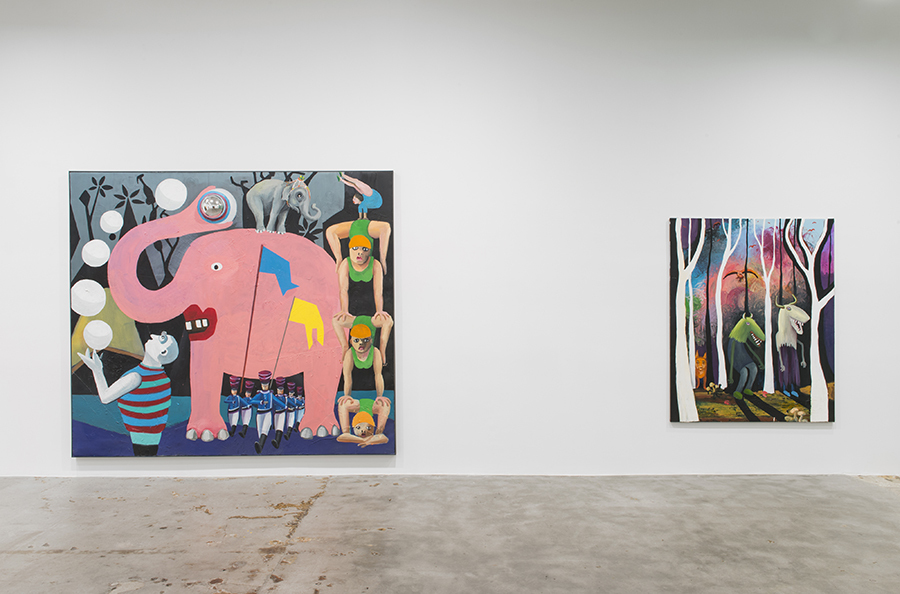 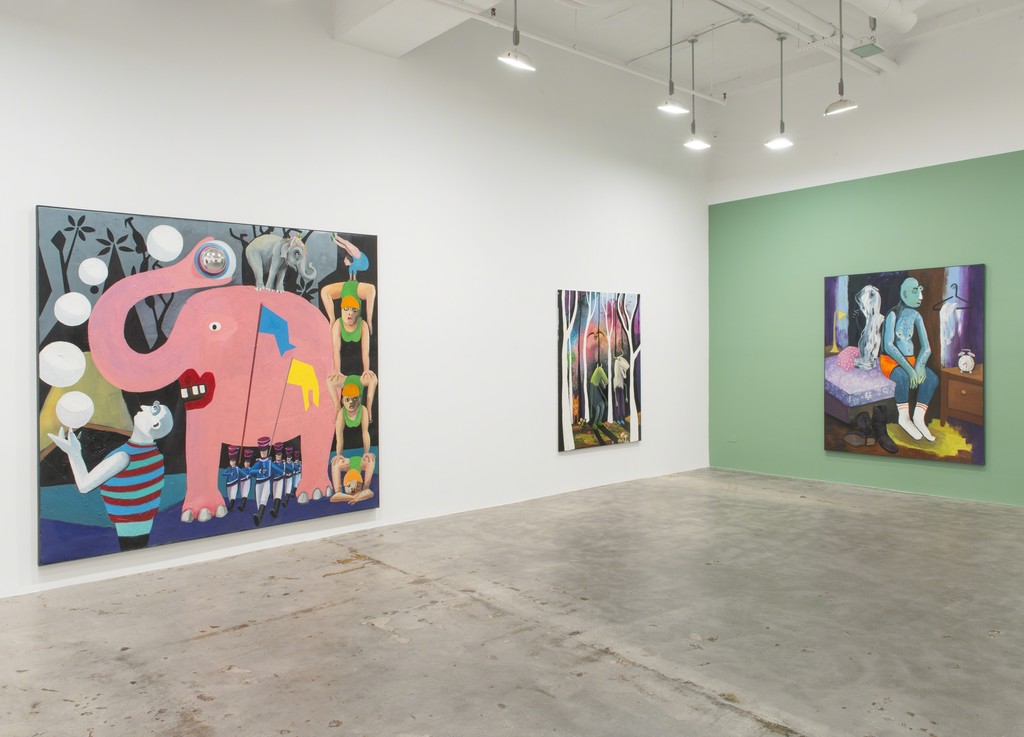 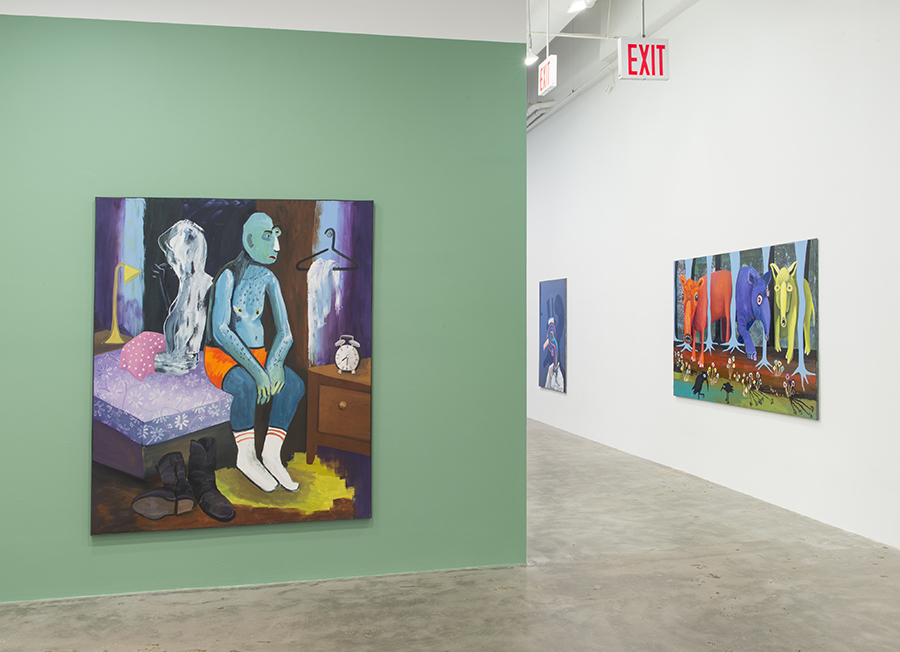 Mike Weiss Gallery is pleased to present Stefanie Gutheil’s fourth exhibition with the gallery, The Home of Mr. Peeps. For this show, the Berlin-based artist has delved deep into the recesses of her imagination – back where horned beasts, laser beams, onesies, a brass marching band, phonographs, multi-talented chickens, the original stooge named Krampus and a giant pink elephant all reside – and emerged with a phantasmagoric stable of characters à la a secularized and hallucinatory version of Noah’s Arc. With this herd of misfit creatures, Gutheil has left normality at the door and transformed the gallery into a sanctuary of the bizarre – a surreal, utopic landscape of chromatic and psychological vibrancy.

With all their quirks and foibles in plain sight, the artist’s fantastical creatures appear to us as friends and intimates. In fact, it is precisely because of the alluring, almost childlike honesty inherent in the figures unabashed eccentricities that connection with the works is nearly inevitable. Yet there is more to these characters than their carnivalesque appearance; in each, Gutheil has instilled an emotional gravity that seems both personally derived and universally comprehensible. Sometimes the sentiment is uplifting – for example in A Walk in the Forest, where we find two cronies strutting with emoticon-worthy smiles strewn across their faces. Other times, the mood isn’t always so chummy. In Safe Bet, it is impossible to say with certainty whether the winged yet dense-looking humanoid is falling down or flying upward, if it has walked the plank by force or leapt from the diving board by choice.

In their peculiar features and with their hearts on their sleeves, Gutheil’s oddballs all emit a vaguely familiar sense of the folkloric, as if the artist unraveled them from traditional fables and stitched together her own. The horned, anthropomorphic, anti-Santa Claus fictional beast of German-Austrian descent named Krampus, for example, seems to make an appearance in multiple works. Instead of a facsimile representation, though, Gutheil has flipped the idea of Krampus on its head­ – in one work it walks a man-carrying pig and in another it nonchalantly strolls through the forest with a friend – by stripping it of its menace and making it comical.

Yet in her fairytales, Gutheil has not set a narrative. Instead, she provides all the raw, jumbled materials – the characters, the costumes, the emotions, and the stage – and leaves us to imagine our own farfetched tales, whether somberly retrospective or curiously, whimsically, and optimistically infantile.

Stefanie Gutheil lives and works in Berlin. Her work resides in public and private collections around the world, including the Taguchi Art Collection (Tokyo), the Hudson Valley Center for Contemporary Art (Peekskill, NY), and the Nerman Museum of Contemporary Art (Overland Park, KS), among many others. The artist and her work have been written about in publications such as Blouin Artinfo, Hyperallergic, Art in America, and Modern Painters. Gutheil was recently exhibited in a solo show at Helsinki Contemporary in Finland and a group exhibition at the Matsumoto City Museum in Japan.