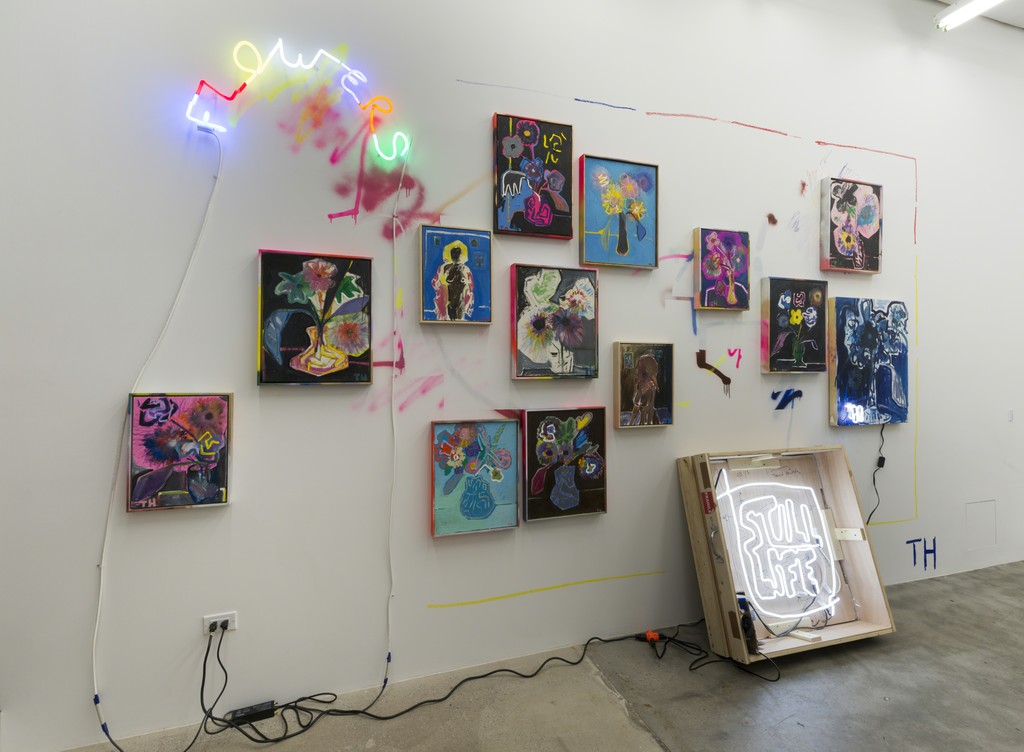 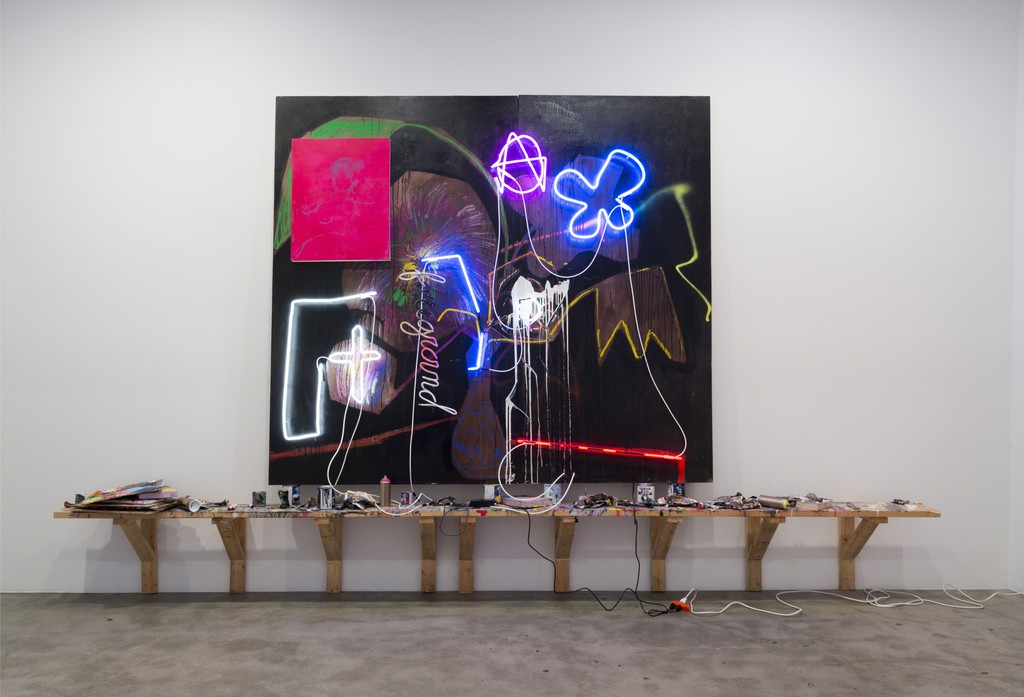 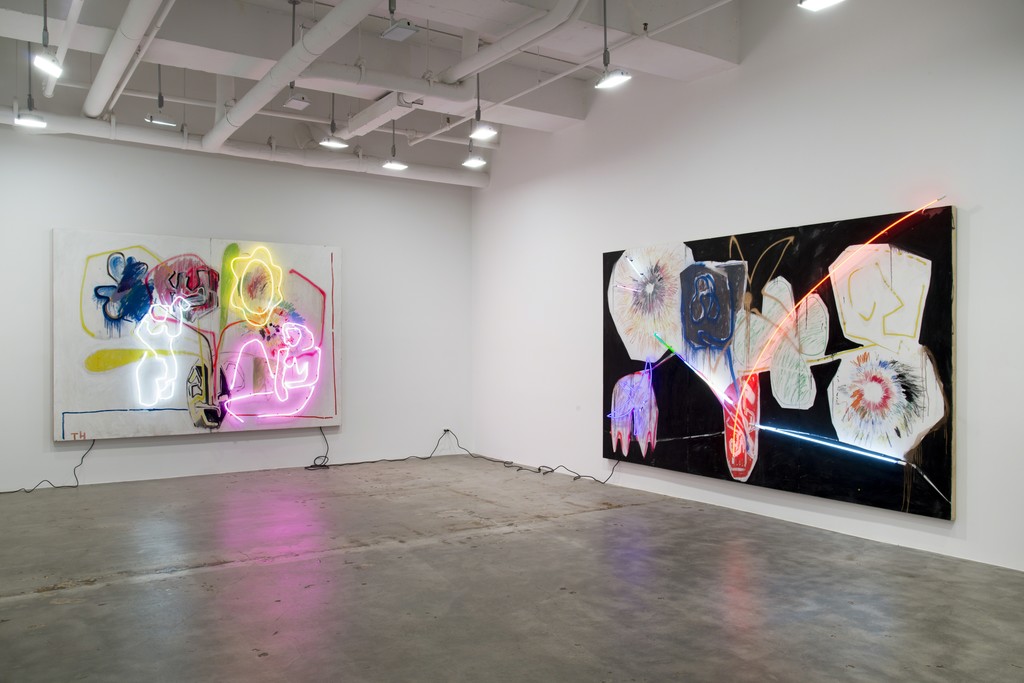 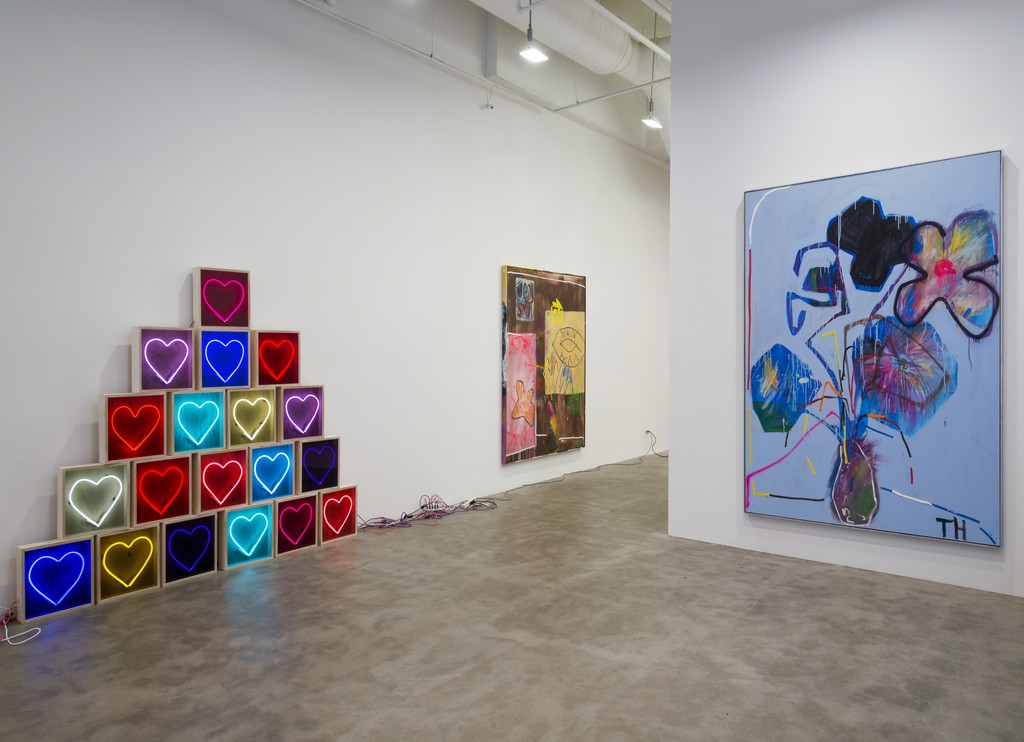 Mike Weiss Gallery is pleased to present All Lit Up On Wine, the debut solo exhibition by Thrush Holmes. Splaying wood panels with exuberant spray paint and slapdash neon tubing, Holmes’ unapologetic methods elevate the still life, the reclining nude figure, and even poetry from their traditional banality to culty, fetishistic status. With the gestural fluidity of Twombly and the poetic dexterity of Basquiat, his intuitive, swaggering practice reveals eccentric florals, brazen silhouettes, glowing prose, and monumental "TH" initials – an arresting display of drunken ego and flexing machismo, rife also with subtle romanticism and raw honesty.

Behold a psychedelic underworld where smears, splatters, and drips of paint coalesce into familiar form, swooping petals and blinged-out physiques that oscillate between the manual prowess of representation and the improvisational violence of abstraction. Pure gesture takes center stage and distills form down to its bare essence, crowned by keyed-up frames in fluorescent hues and brilliant lights. With all the virtuoso of graffiti and John Hancocks loud enough to proverbially piss their territory, each work simultaneously binges on its own sense of power and exercises mature restraint. They are unafraid of beauty yet also gorge on a certain vile aggression – eloquent yet unstable, explicit but without perversion, fearless yet calculated.

In Paint, Blood, Beer, Circuits and Shit we are assaulted by excess, by everything but the kitchen sink – anarchy, religious symbolism, mock portraiture, remnants of the artist’s grueling practice, even an intimate interior “foreground” self-aware enough to announce its own presence. Death Valley Lovers flanks statuesque figures of both a reclining nude and female bust, each pose exquisitely canonical and yet detuned in the vein of DeKooning, while a pyramid of radiant heart sculptures toys with what is perhaps the most hackneyed, emblematic symbol of the twentieth century. And in This is Some New York Shit, we find haphazard day-glo neon bulbs strewn about with all the irreverence and functionality of a Hotel VACANCY sign.

Knowingly borrowing what iconography lies just as easily in thrift shops as any museum collection, Holmes navigates grandiose concepts of biography, introspection, and materiality with all the sincerity of a scrawled cocktail napkin. As the familiar transmutes into Frankenstein hybrids of entirely new, evocative visual language, time-honored genres once so bogged down by their own histories can live again and wreak havoc once more.

Thrush Holmes lives and works in Toronto and has been widely exhibited throughout Canada. His work can be found in permanent collections such as the Elton John Aids Foundation, Sony Dreamworks, and Defjam Records among others.