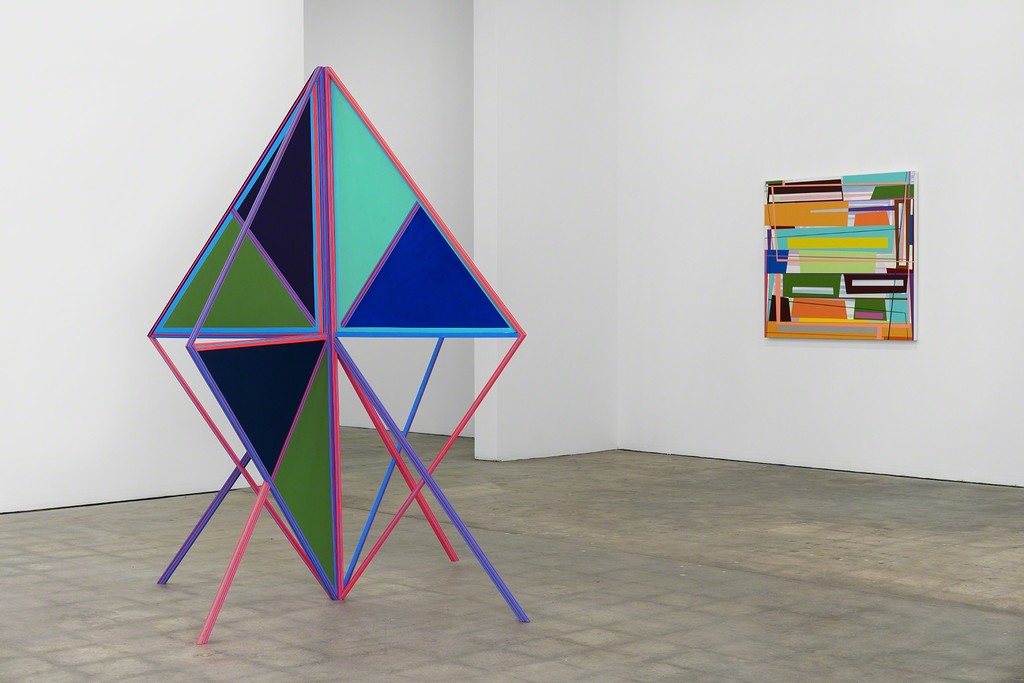 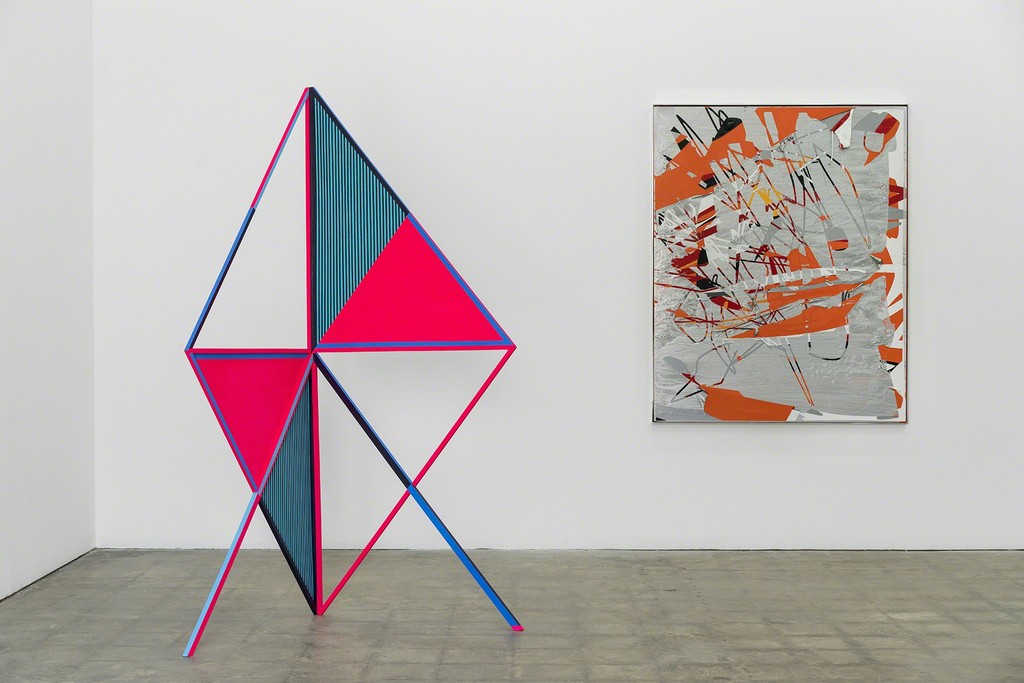 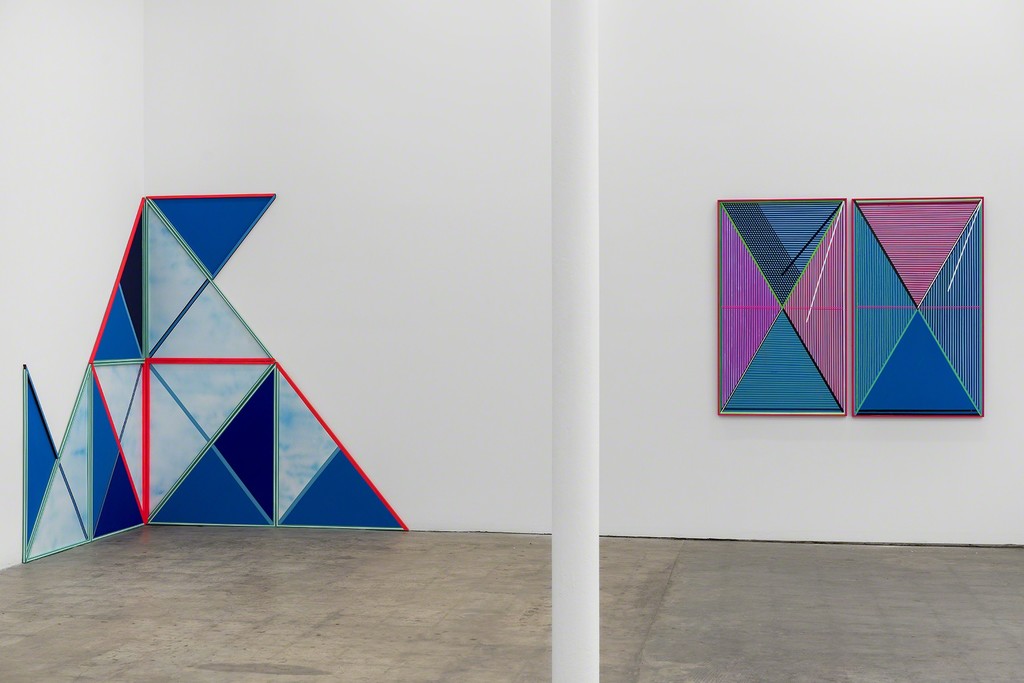 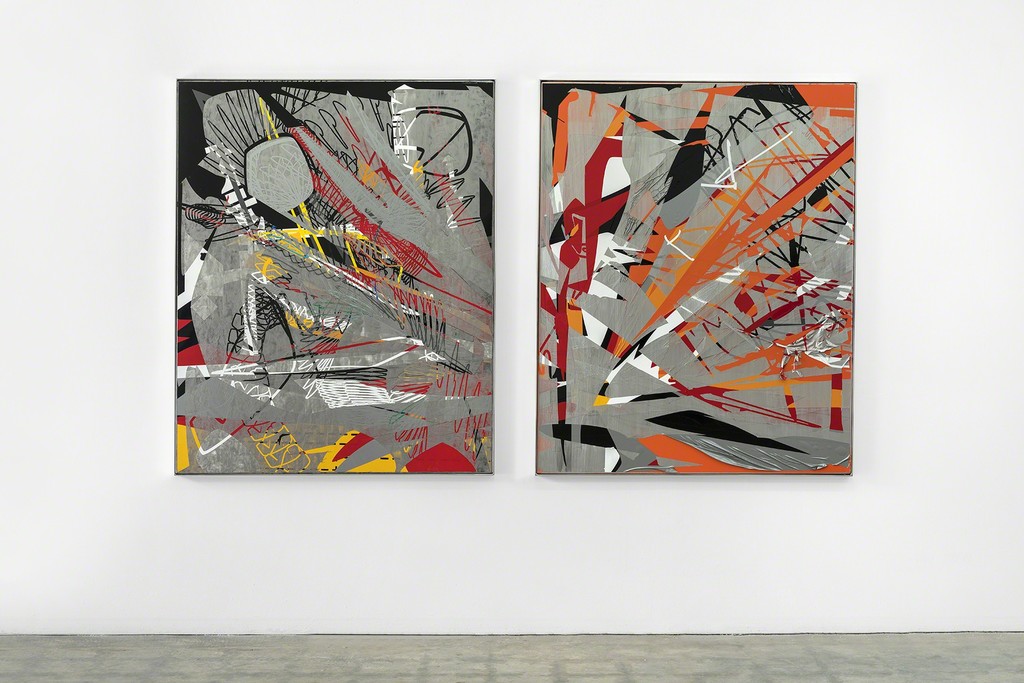 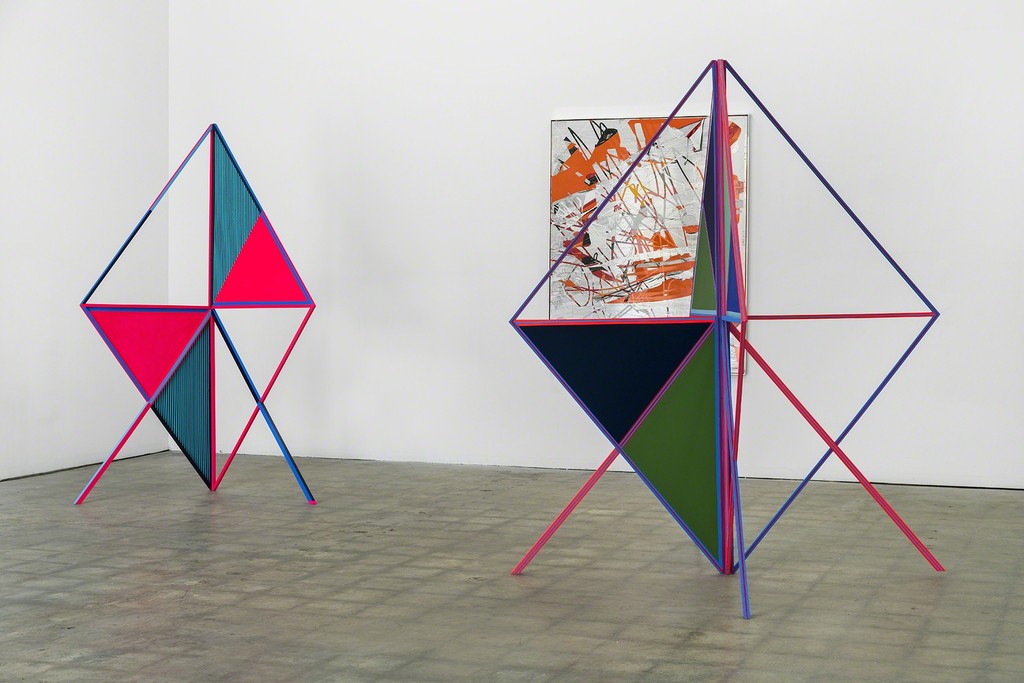 “Silence is only frightening to people who are compulsively verbalizing.”

The works in this show are loud and vibrant. They screech for attention. Their graphic line and bold color inspire movement and geometry. In order to truly experience the work, you need to look and squint and look again. Close off all noise and chatter and see the visual connections.

By working with geometry and color, Gary Petersen brings a personal and idiosyncratic touch to this genre and addresses issues of uncertainty, imbalance, and playfulness. He starts a painting with multiple irregular lines and grids. Then brushes on a thin wash of transparent white, which partially obscures this under-painting. This creates a muted scaffolding, or substructure, to build my stacking forms and lines. As he paints, one decision determines the next, building up his wobbly stacked forms. Unlike most geometric painting, which is preliminarily sketched out and planned, Peterson works intuitively, one decision determining the next. Space is implied in his work, rather than being illusionistic. Color is the scaffold that holds his forms in place while giving them a rhythm that is both harmonious and dissonant. Petersen’s irregular geometric forms overlap one another with rhythmic energy, punctuated by linear elements, which zip across the surface, articulating the larger masses of color while providing movement and direction.

It requires the enormous presence of mind or rather quickness of wit when opening your eyes to seize hold, as it were, of everything in the room at exactly the same place where you had let it go on the previous evening. That is why the moment of waking up was the riskiest moment of the day. Once that was well over without deflecting you from your orbit, you could take heart of grace for the rest of the day.

The relationship between the participant and the painted object are important to Kelly Johnson’s practice. The body of work is investigating the interaction with the viewer and their movement with the sculptural aspects of the artwork. This is the merging of physical space and the illusion of space. Taking simple shapes and primary hues as a point of departure, he methodically builds these essential elements, transforming to a slow hum. These works invite thoughtful consideration, resonating with the idea of humming as a meditative chant or spiritual salvo. Raised in a religious household, he considers aspects of spirituality as it relates to Minimalist and Color Field painting then applies this perspective to negotiate the constant distraction of contemporary culture. Through careful constructions and powerful combinations of vibrant hues, Johnson invites the visitor to “escape into the present” by surrendering to the delicate choreography of space, line, and tone. Each piece demands to be navigated, not simply absorbed from a single position. He likes to think of it as a dance. As one moves around the work it changes, revealing optical interactions that create patterns and vantage points. Visual rhythm fuels a dialog about a tension between spaces. This echo breathes new life into the interstitial moment existing “between the fluid boundaries of reality and fiction”.

Alejandro Contreras collects fragments. He builds surfaces assembled from strips of vinyl and obscures the surface with paint-masking and exposing movement. No matter the proposal or challenge—he’s the consummate yes man. Given his hectic lifestyle-he manages to integrate a manic sense of creativity in his oeuvre, while still being able to convey a finessed work of art that feels considered and accomplished. The seemingly endless flow of line and vibrant color speak to ideas developed through extensive travel and life experience. His practice includes furniture design as well.

Mindy Solomon Gallery is delighted to bring noise without sound, now just shut up and listen.