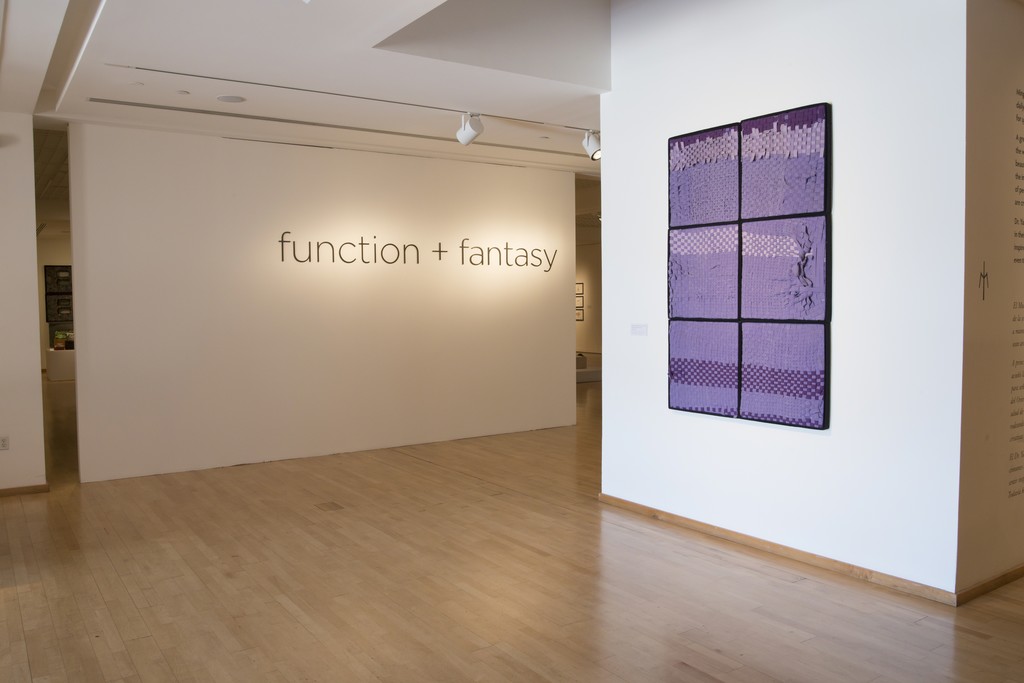 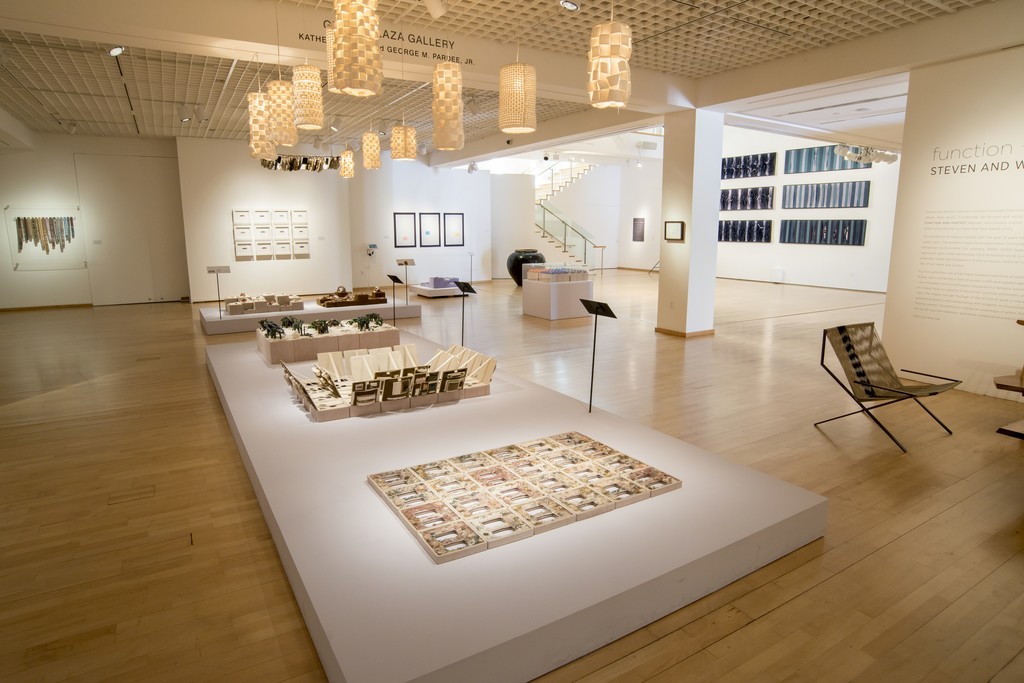 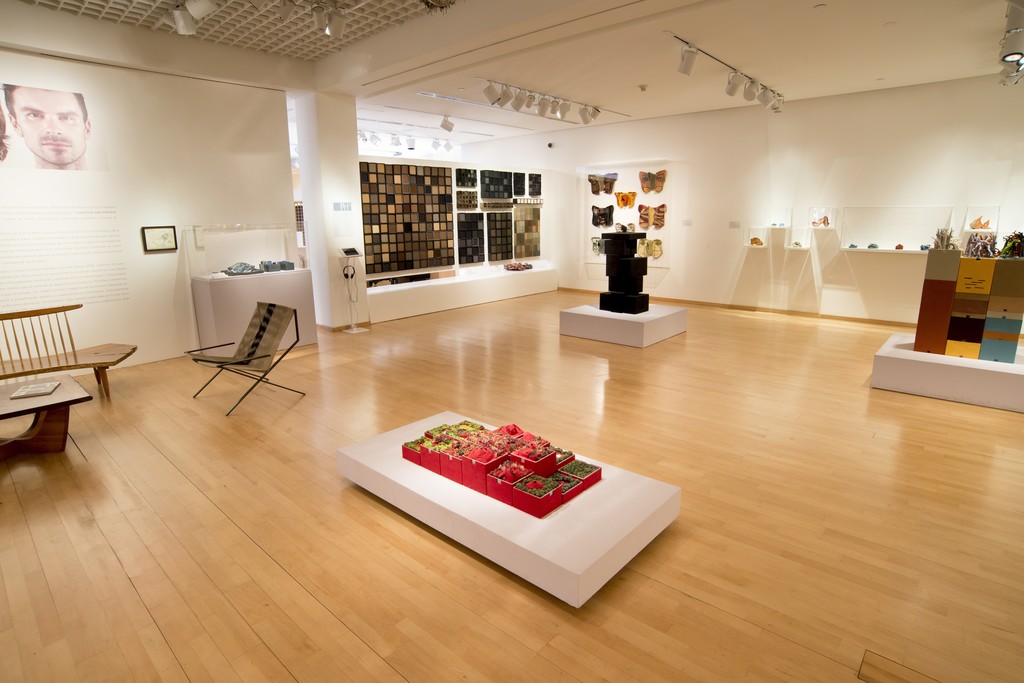 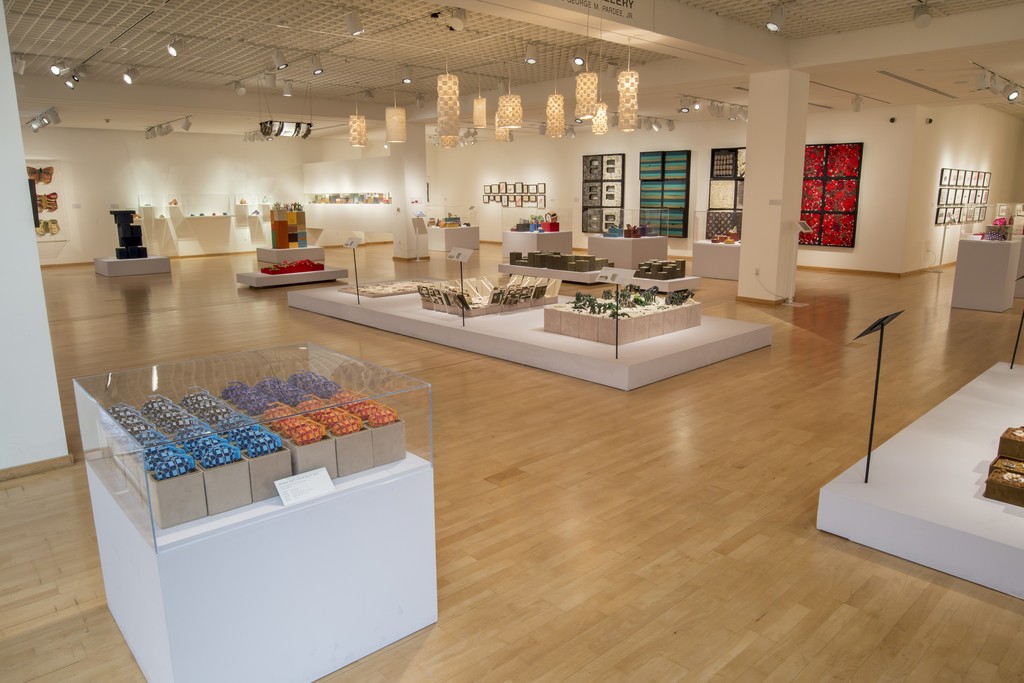 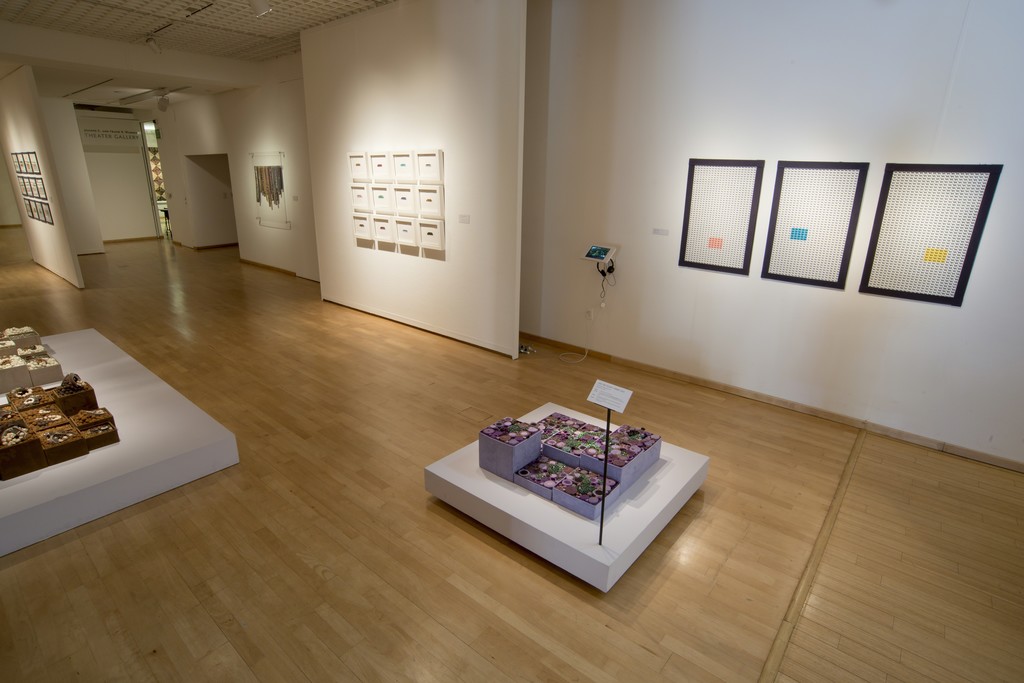 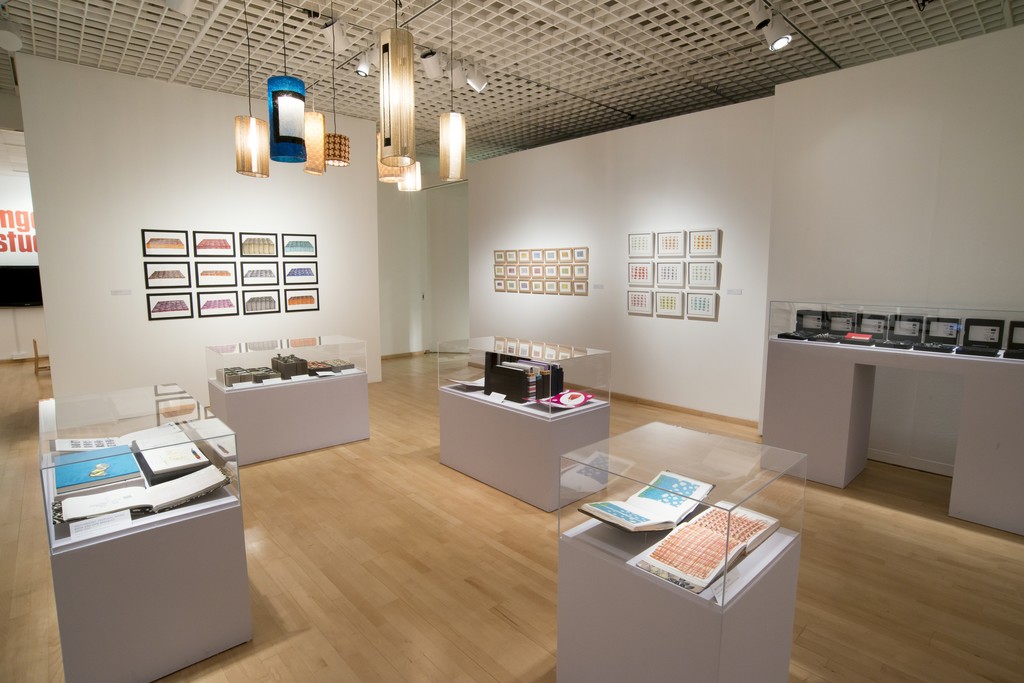 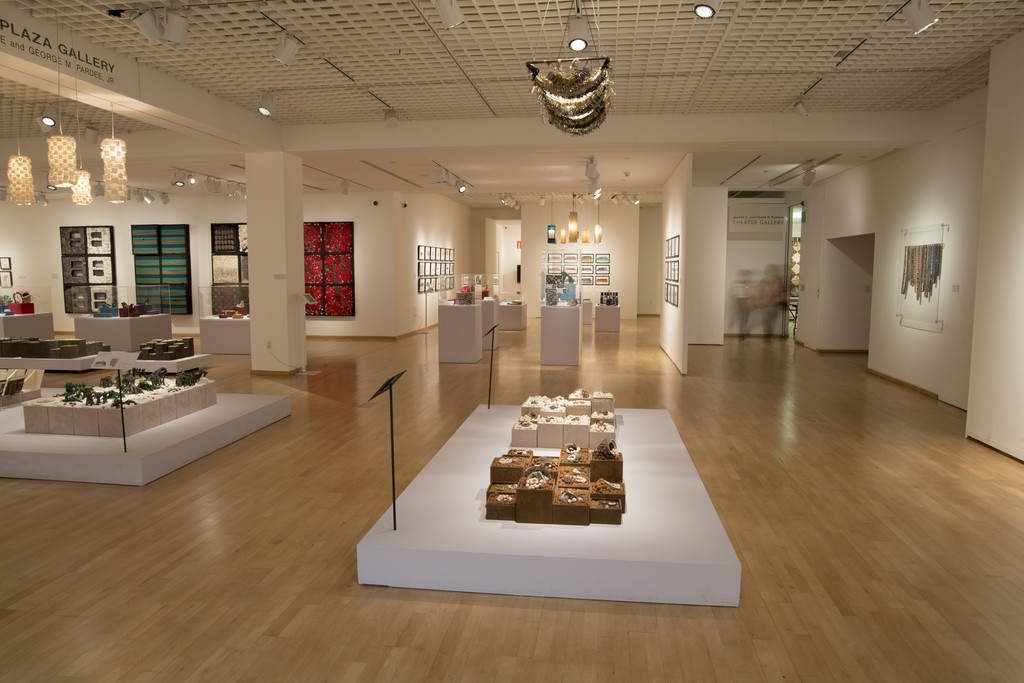 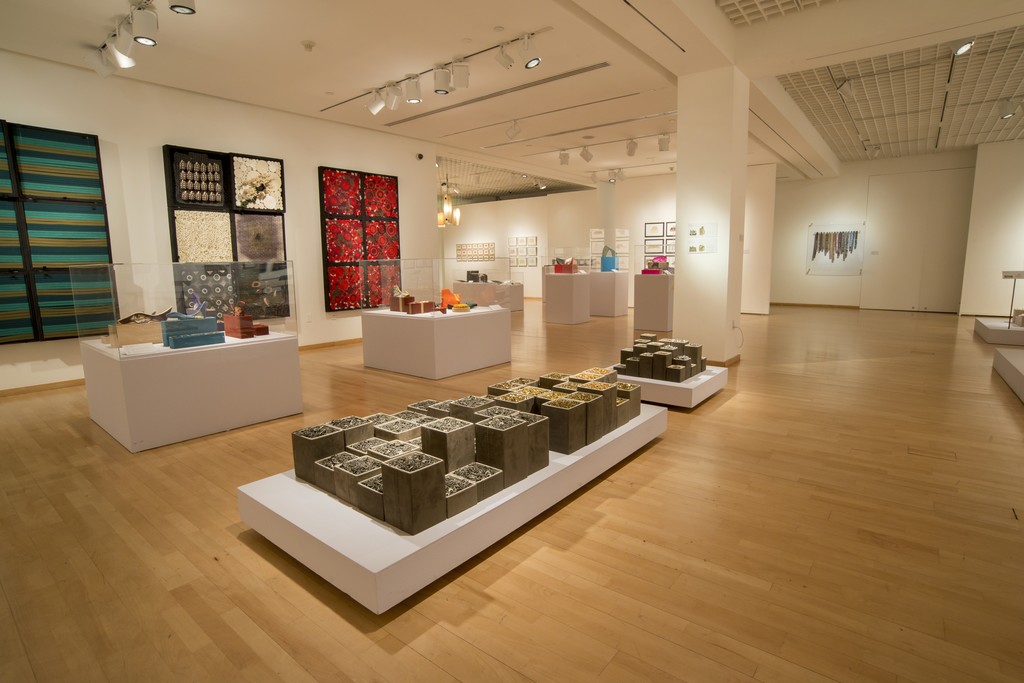 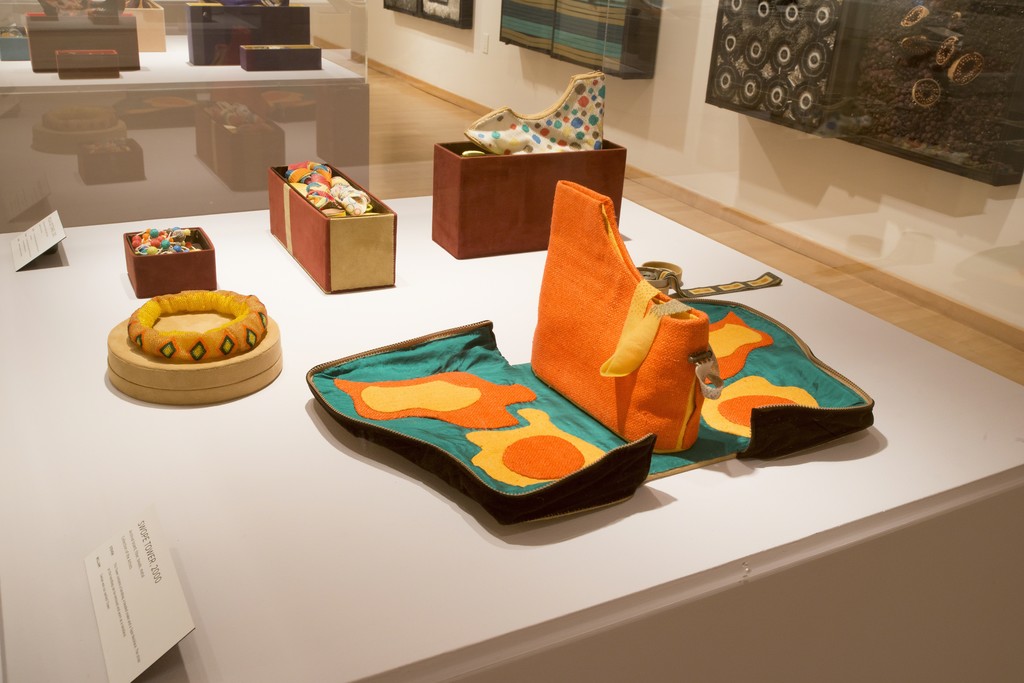 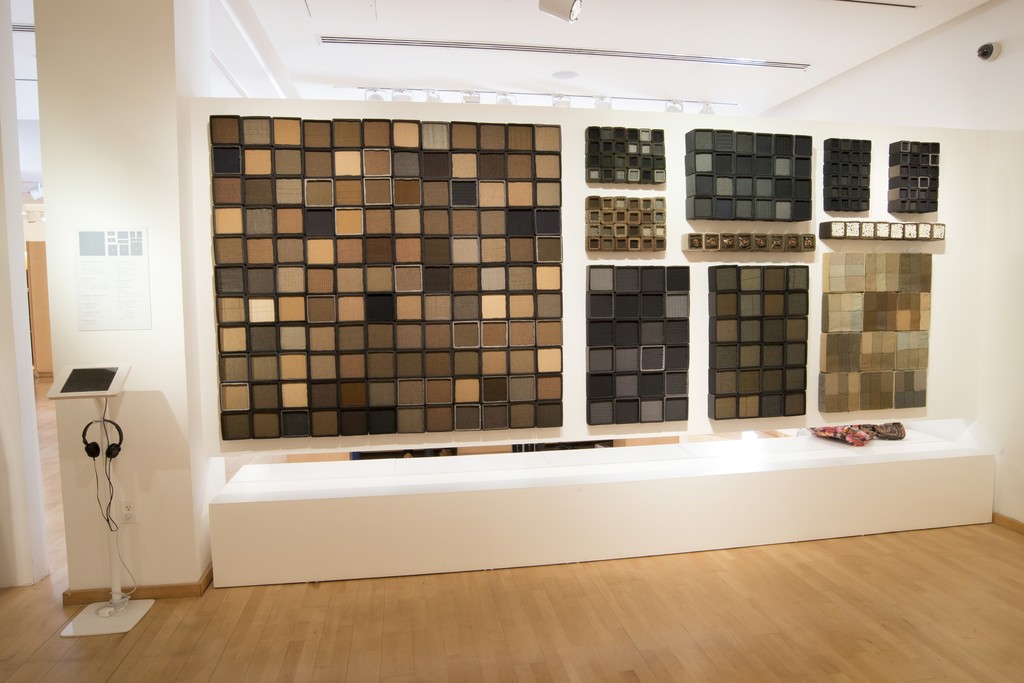 Collaborators for over a decade, Steven and William move freely between the worlds of craft, fashion, design and art. Their work is inspired, in part, by the physicality of the materials they choose to work with, such as beads, twill tape, metal fittings and fabric. The result is complex, labor intensive, meticulous, even obsessively-patterned but work that is abstractly referencing their memories of growing up in St. Louis. Their hand sewn boxes contain carefully constructed environments related to these shared memories of family life. When closed and stacked, the boxes become sculptural Towers, majestic works of art, at rest until the Towers are dismantled and contents revealed. The brothers often open the boxes through a rhythmic and choreographed performance, arranging them in their landscape formations. The landscapes are composed of found materials the brothers have sewn, beaded, scrolled, rolled or stacked, creating tightly organized settings that reference moments from their lives.

“Steven often reminds me that at our first meeting seven years ago I told him that I was amazed how in their work they managed to stay, apparently, just this side of insane,” says Rob Sidner, the director of Mingei International Museum. “He knew then that I got them, so to speak, and we both looked forward to showcasing their work here at Mingei one day.”

This exhibition includes a range of projects the Ladds have created in the last ten years, including beaded accessories such as handbags, scarves, ties, necklaces and bracelets, as well as large-scale installations, elaborate series of Towers (including a new “Mingei Tower”), drawings, books and six videos featuring the Ladd brothers talking about their work.

About Steven and William

Steven and William Ladd, New York-based artists and brothers, have been collaborating for 11 years. Their values – Spend your life doing what you love, Be focused and disciplined, Collaborate – are embedded in their work and their lives.

In 2011, the Ladd brothers had their first solo museum exhibition at The Contemporary Museum, Honolulu. Using a grant from the Andy Warhol Foundation for the Visual Arts (2010), they were given the entire museum to showcase new works featuring Ant Infestation – a large Tower that opens to reveal a beautiful landscape of hand-beaded trees with an infestation of 600 small cast ants. Following the popular and critically acclaimed Hawaii show, the brothers began working on a new series, entitled Shaboygen, focused on their shared high school memories, presented at the Essl Museum of Contemporary Art, Austria, in November 2012.

In addition to preparing their work for the Mingei International Museum exhibition in San Diego, the brothers are also planning a series for a solo exhibition at the newly constructed Parrish Art Museum in the Hamptons. Steven and William’s works are in the permanent collections of several museums, including: The Corning Museum of Glass, The Contemporary Museum, and the Decorative Arts Museum at the Louvre; and, in the private collections of arts patrons: Beth Rudin DeWoody, Shelley and Philip Aarons, and John Studzinski.