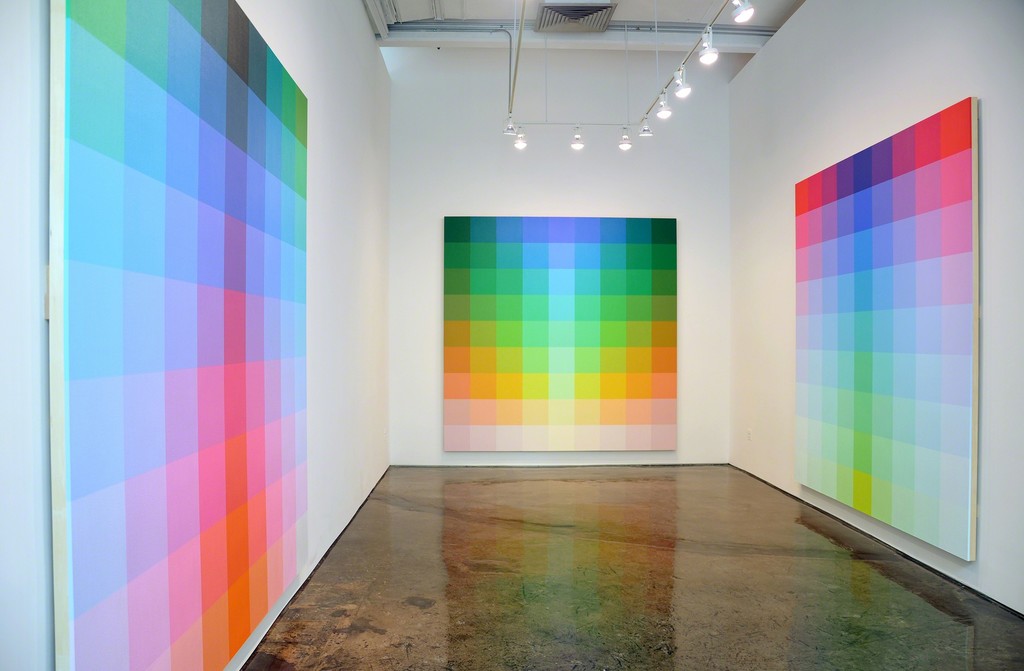 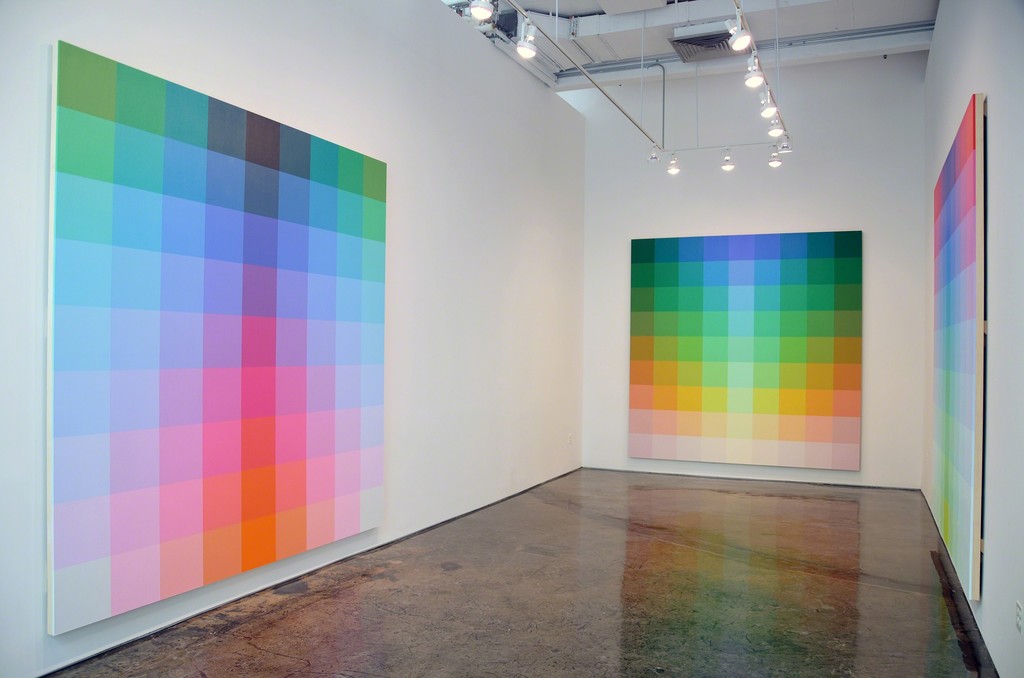 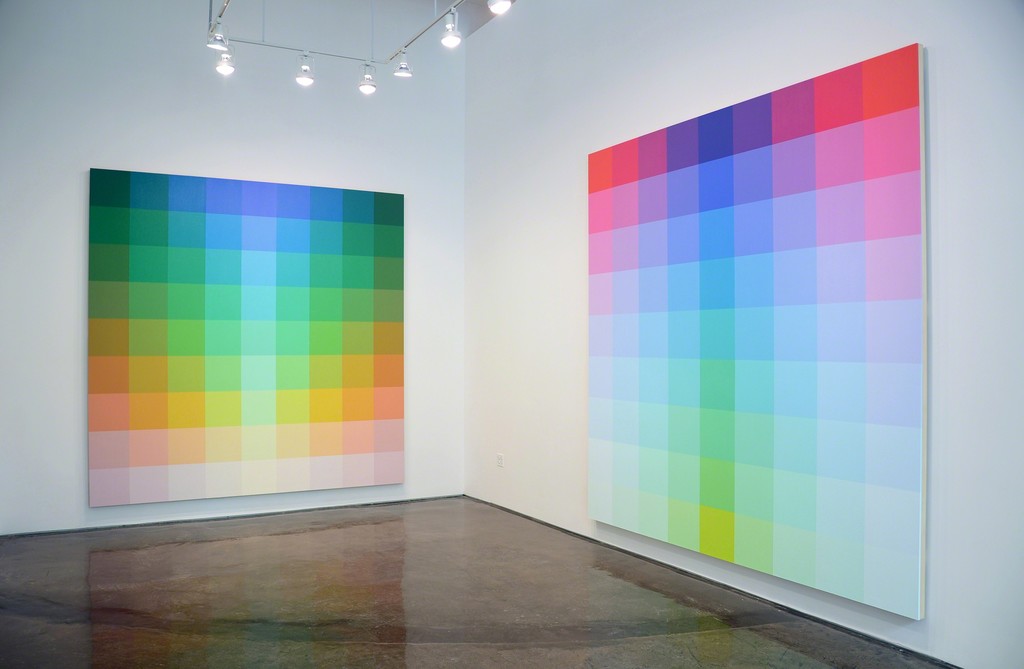 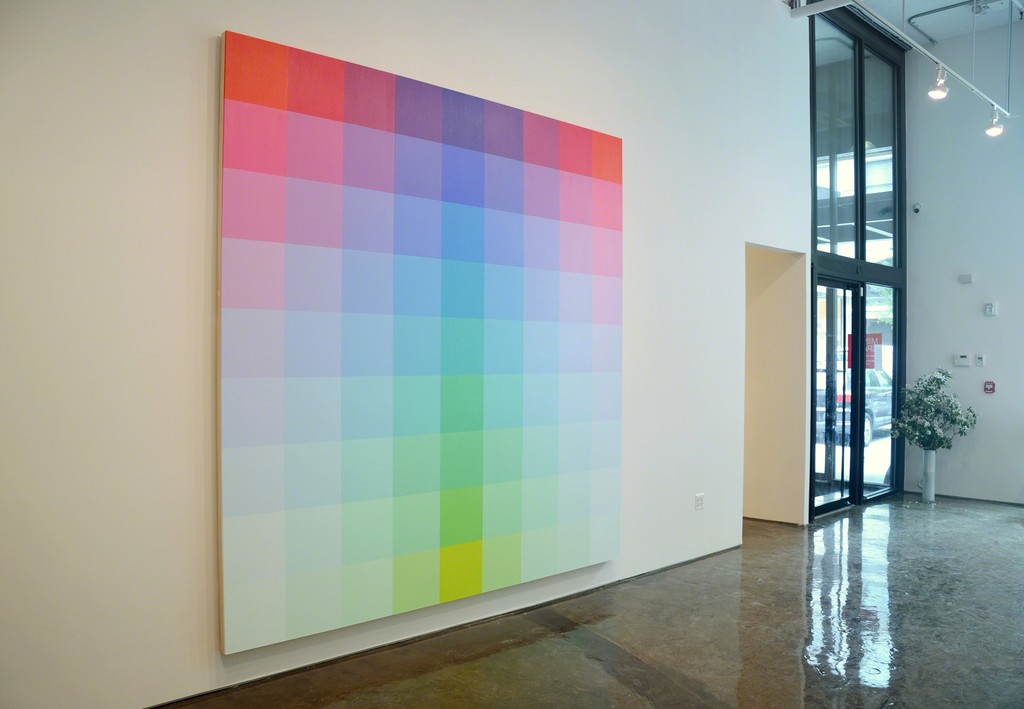 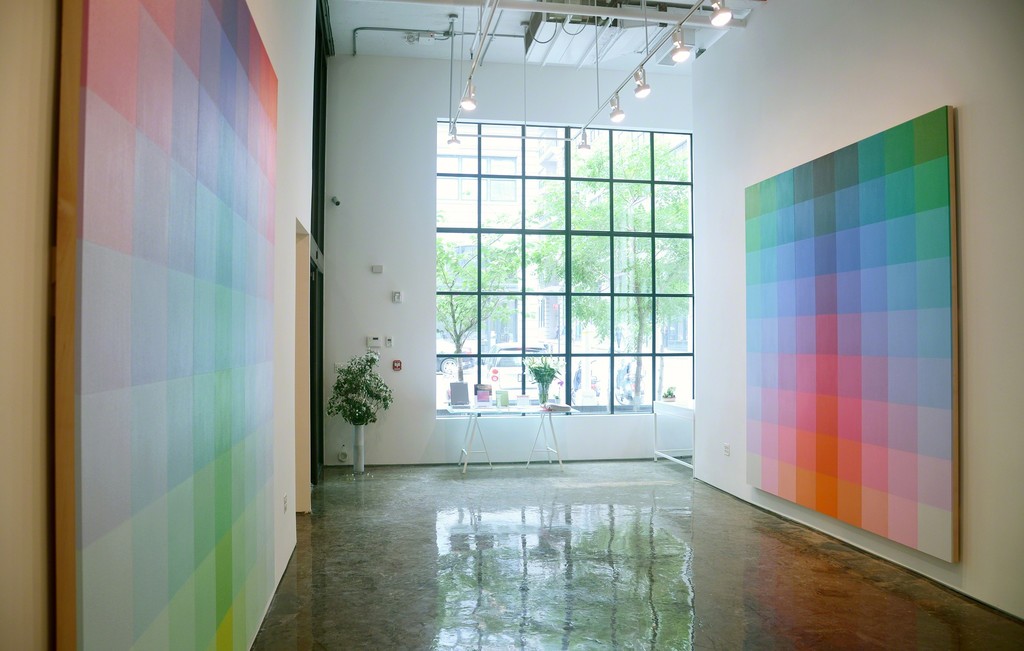 MINUS SPACE is delighted to inaugurate our new ground floor gallery location at 16 Main Street, Ground Floor in Dumbo, Brooklyn with a solo exhibition of new, large-scale color paintings by NYC-based artist Robert Swain (b. 1940). This is the artist’s second solo exhibition with the gallery.

For his exhibition Color Energy, Swain presents an immersive set of three new nine by nine foot paintings, in which squares of pure color are arranged into grids that are subtly modulated by hue, value, and saturation. The paintings are Swain’s latest investigation into the color system he’s developed over the past five decades. The centerpiece of his system is a 30-part color circle. These colors, when combined with the attributes of value (the lightness or darkness of a color) and saturation (the pureness of a color), produce a complement of 4,896 distinct hues.

Regarding the development of his color system, Swain states, “I became interested in color in the early 1960s. There wasn’t a great deal of written information about it, but I work intuitively. I started to look at color and to make charts and experimental work trying to understand the phenomenology of color. I don’t look at the work as being objective. I simply look at it as a way of trying to get into the subject matter of color and to understand it through experience. And all of this was done visually. It wasn’t done mathematically. It wasn’t done in some kind of progression. It was simply done by painting color charts, looking at them, and deciding in that moment of looking if they were correct or not.”

Swain continues, “Color is a form of energy derived from the electromagnetic spectrum that stimulates our perceptual processes and is instrumental in conveying emotions. In some instances, color is culturally encoded, projecting content through symbolism or associations. The origin for such references are found in the way that the energy (wavelengths), from a particular color, generates feeling; a physiological change produced by the wavelength (energy), of a particular color or colors. The energy which emanates from green is distinctly different from the wavelengths that define red. In some cultures, pure red is associated with danger. Feelings and attitudes created by the aggressive, radiate energy, which is unique to the red part of the spectrum. When pure red is altered, its emotional attributes change, as in the stability associated with red earth colors, or the whimsical fluctuation produced by pink. In this sense, color transmits feeling(s) through the perception of energy (wavelengths) from the electromagnetic spectrum. Freed from cultural restraints, red can be experienced by itself as a phenomenon, which possesses substantial content. When red is placed next to green, the contrast is heightened, as M. E. Chevreul has observed, and the experience resides in the energy generated by the convergence of these unique spectral wavelengths.”

ABOUT THE ARTIST
Robert Swain is one of the most influential artists of his generation. He was born in Austin, Texas, in 1940, and grew up in Arlington, Virginia. During high school in the late 1950s, he spent his summers in Guatemala and Nicaragua working on the Pan-American Highway. He attended The American University in Washington, DC, where he later received a BA in Fine Art in 1964. During his undergraduate studies, he spent two years in Madrid, Spain, studying at the University of Madrid. In 1964, he moved to Provincetown, Massachusetts, and worked as a studio assistant to the American Modernist painter Karl Knaths. Swain moved to NYC in 1965 where he permanently settled in Manhattan’s Tribeca neighborhood.

In 1966, Swain began his first color-based work followed a year later by his first work utilizing the grid. He participated in his first group exhibition, Light and Line, organized by John Baldwin at the legendary Park Place Gallery in NYC in 1967. That same year he met sculptor Tony Smith who became his close friend and mentor for many years. In 1969, Swain began to develop his own color system, a project that continues until today.
Swain has exhibited his work nationally and internationally for more than 40 years. His paintings have been including in countless landmark exhibitions. He participated in the seminal exhibition Art of the Real curated by Eugene Goossen at the Museum of Modern Art, NYC, in 1968. The exhibition traveled for the next two years to the Grand Palais, Paris, France; Kunsthaus, Zurich, Switzerland; and The Tate Gallery, London, England. Swain exhibited in The Structure of Color curated by Marcia Tucker at the Whitney Museum of American Art, NYC, in 1971.

In addition to his artistic work, Swain taught in the Department of Art & Art History at Hunter College from 1968-2014, where he educated and mentored countless generations of artists. For his teaching, he was awarded the Distinguished Teaching of Art Award from the College Art Association in 1998.

In 2010, Swain was the subject of a major 45-year survey exhibition entitled Visual Sensations: The Paintings of Robert Swain curated by Gabriele Evertz at Hunter College/Times Square Gallery, NYC. In 2014, he installed a major exhibition of large paintings entitled The Form of Color at the Santa Monica Museum of Art, Santa Monica, CA, curated by Jeffrey Uslip.

About The Form of Color, artist and critic Eve Wood writes, “Perhaps the most engaging and powerful elements of this exhibition are its simplicity, and the attention to light and shadow. The work is lit evenly, allowing each color its own space and vibrancy, yet within this seeming eveness are distortions and color alliances as one hue pops out as another recedes back. Thus there is an almost constant sense of movement to the installation, a near palpable electricity, as though the paintings are living organisms constantly shifting and settling. Ultimately, Swain’s love of color is contagious. We all love color, as it is another way we define and identify ourselves as human. Color allows us to access feelings and states of being, and Swain is simply articulating what we already know and understand.” (Art Ltd. Magazine, July-August 2014).