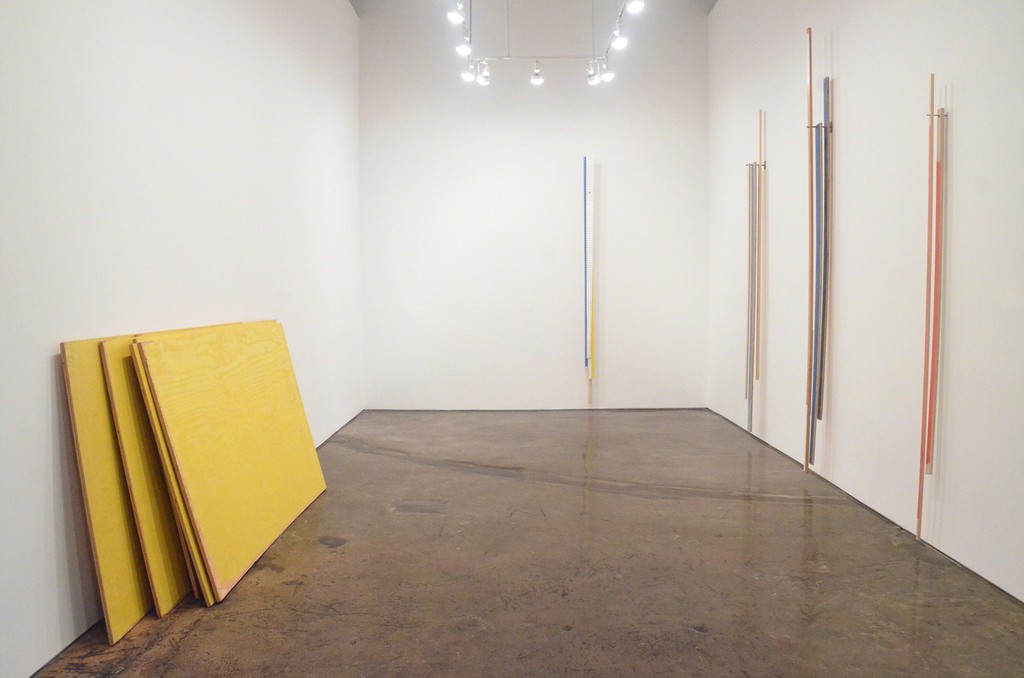 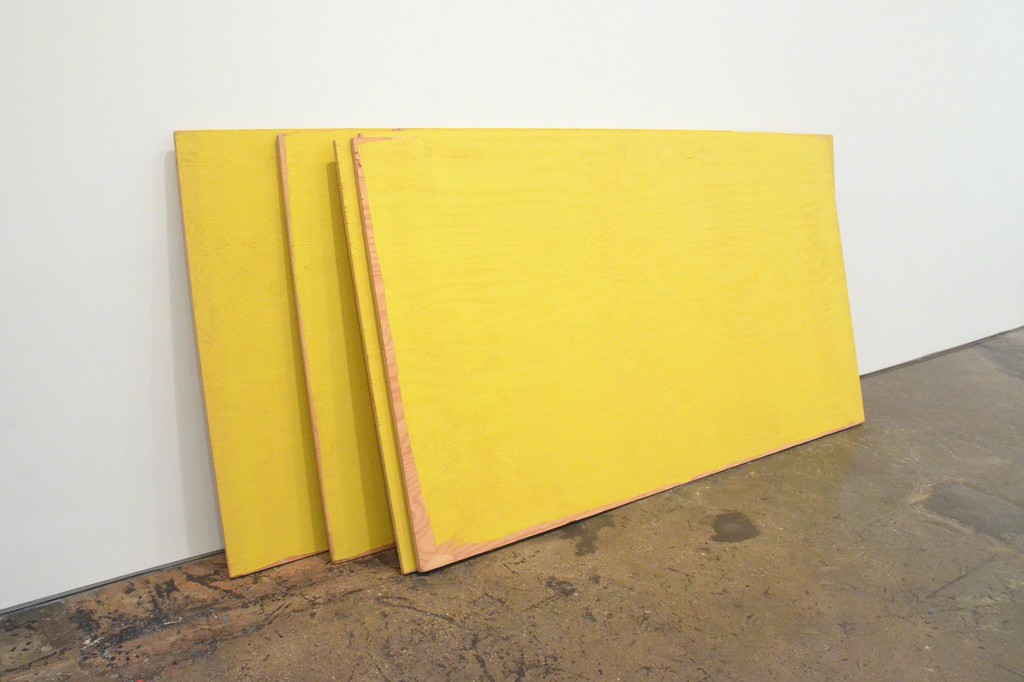 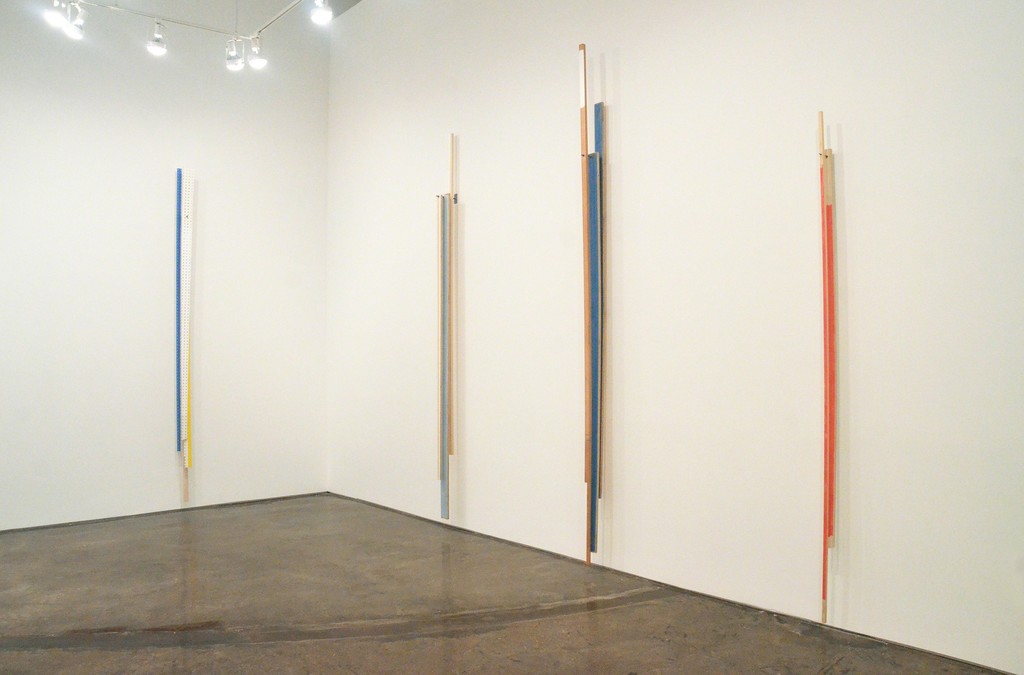 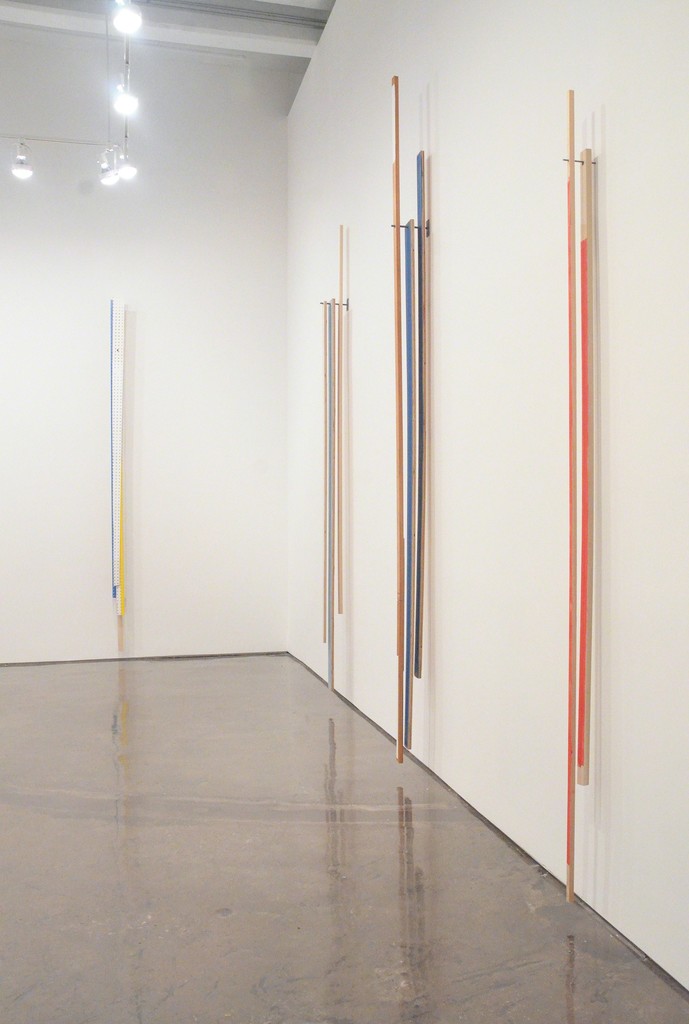 MINUS SPACE is pleased to announce the exhibition Russell Maltz: Painted / Stacked / Suspended. This is the renowned New York City-based artist’s second solo exhibition at the gallery and it will present both new and earlier works by the artist.

Russell Maltz produces work in a broad array of media, including painting, sculpture, installation, drawing, and photography. Working both indoors and out, Maltz commonly uses new or repurposed commercial building materials, such as plywood, lumber, metal wall studs, cinder blocks, glass, PVC pipes, and enamel paint, which he gingerly manipulates and sites in response to the dynamics of a given environment. His work often appears raw and industrial upon first impression, a striking contrast against the seemingly casual nature of its arrangement. The works deliberately eliminate any separation between the objects and the space, as well as any distance between the artwork and the viewer.

Maltz’s exhibition Painted / Stacked / Suspended presents a suite of new layered and suspended works from his recent Needle series, as well as a single vintage large-format leaning plywood work (STACK – Safety Yellow, 1985). Additional suspended monochromatic works on multiple shifting plywood panels will be on view in the gallery’s Water Street windows. About his work over the past four decades, Maltz states, “I have an affinity towards the found object. It is clear to me that paint is a material that is applied to another material. It is also clear that my works are not hung on the wall, but rather installed on the wall.” He continues, “I explore the temporal aspects of presence rather than the static construct of the specific physical properties of a site. I have found that if I stay out of my own way and truly follow my value for being present, the work follows.”

There will be an artist talk and book signing for Russell Maltz’s new monograph Painted / Stacked / Suspended published by Kerber Verlag at the gallery on Saturday, October 7, from 3-5pm.

For further information about the exhibition and available works, please contact the gallery. Available works can also be viewed on our Artsy page: www.artsy.net/minus-space.

ABOUT THE ARTIST
Russell Maltz (b. 1952, Brooklyn, NY; lives New York, NY) is one of the leading reductive artists of his generation. Over the past 40 years, he has exhibited his work in solo and group exhibitions internationally, including in Switzerland, Germany, Denmark, Austria, Sweden, Israel, Mexico, and the United States. The first comprehensive retrospective exhibition of his work was mounted this summer by the Stadtgalerie Saarbrücken in Germany (May 19 - August 27, 2017) and was accompanied by a 230-page book published by Kerber Verlag.

At the gallery Maltz was recently included in the group exhibition On Paper in summer 2016. He also presented new work in the two-person exhibition Plywood, alongside artist Melissa Kretschmer, in 2015, and mounted the solo survey exhibition The Ball Park Series, 1977-2012 in 2012. That same year he produced a major installation entitled Painted/Stacked Oaxaca at the Museo de los Pintores Oaxaqueños, part of our survey exhibition MINUS SPACE en Oaxaca in Mexico.

Maltz’s work is included in many public and private collections worldwide, including The Brooklyn Museum (Brooklyn, NY), Yale University Art Gallery (New Haven, CT), Fogg Art Museum/Harvard University Art Museums (Cambridge, MA), Museum Moderner Kunst (Ottendorf, Germany), and the Gallery of Western Australia (Perth, Australia). His work has been reviewed in publications such as The New York Times, Artforum, Art in America, and Village Voice, among many others.

Maltz serves on the Advisory Board of Critical Practices Inc. (CPI), which supports the emergence and development of new practices within the field of cultural production. CPI was included in the 2014 Whitney Biennial at the Whitney Museum of American Art.

ABOUT MINUS SPACE
Founded in 2003, MINUS SPACE presents the past, present, and future of reductive art on the international level.