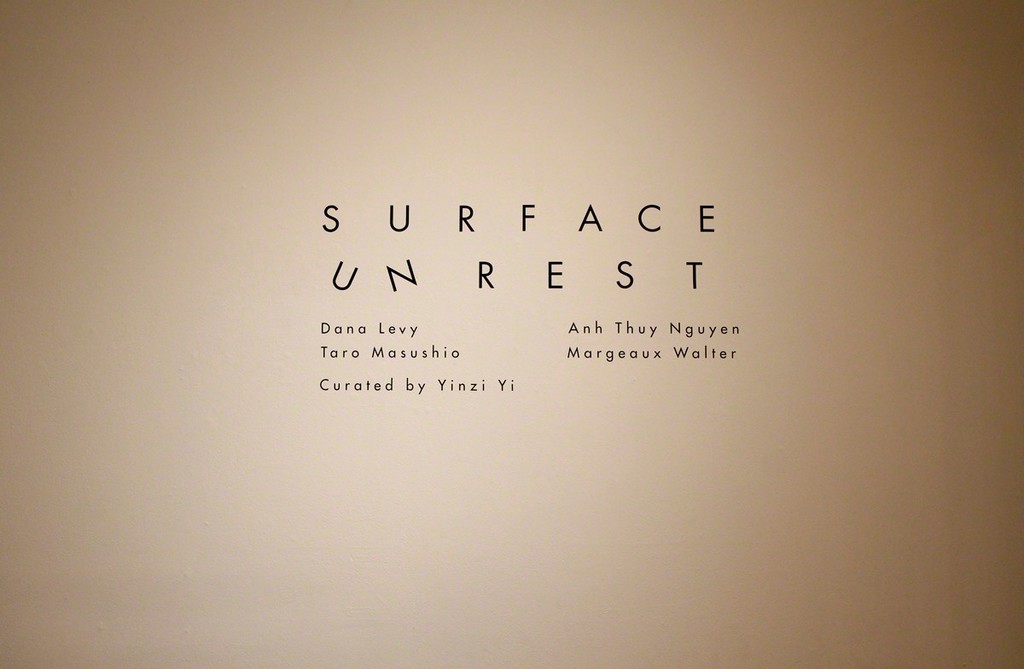 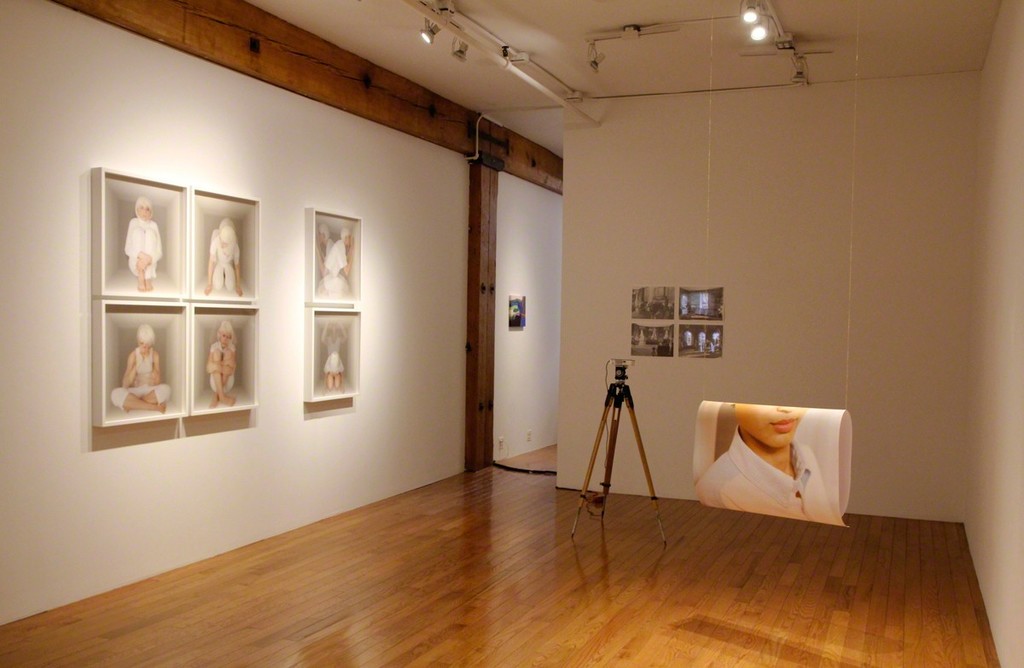 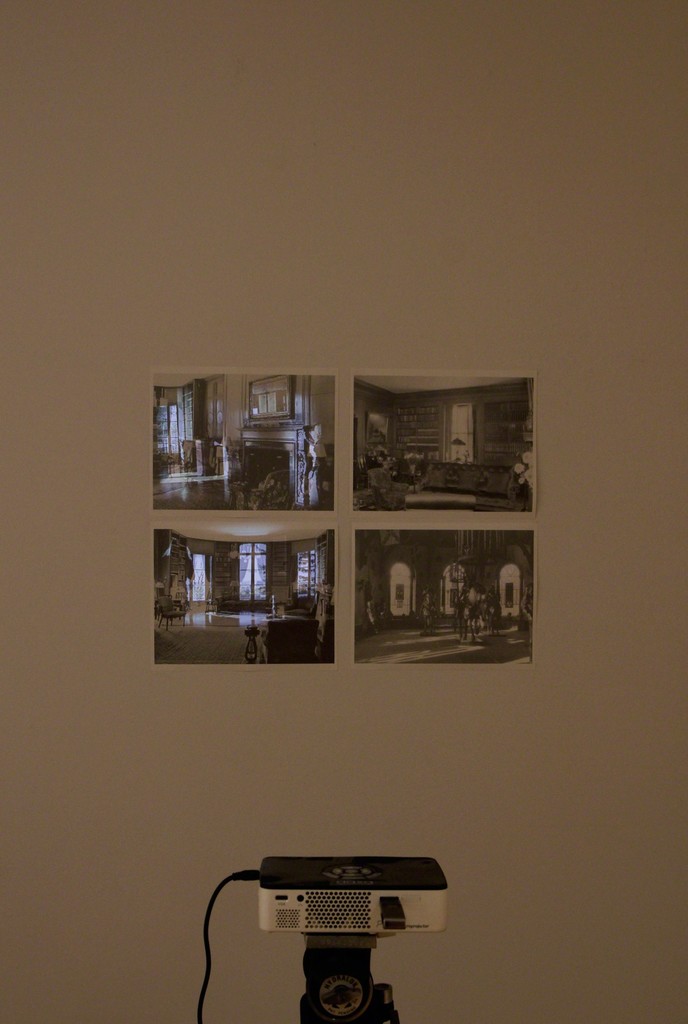 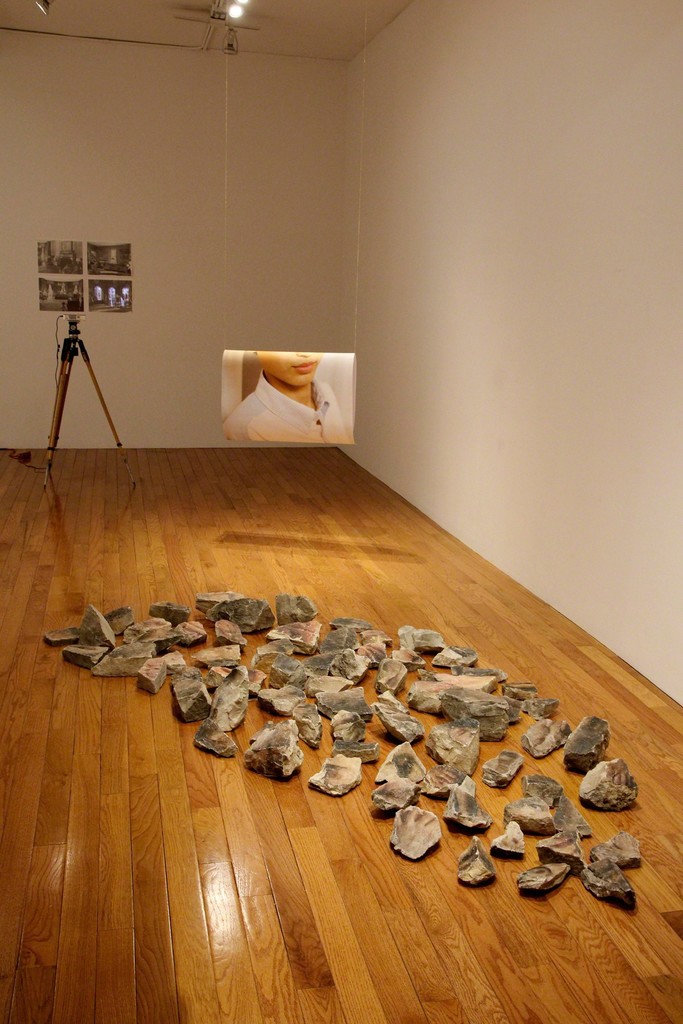 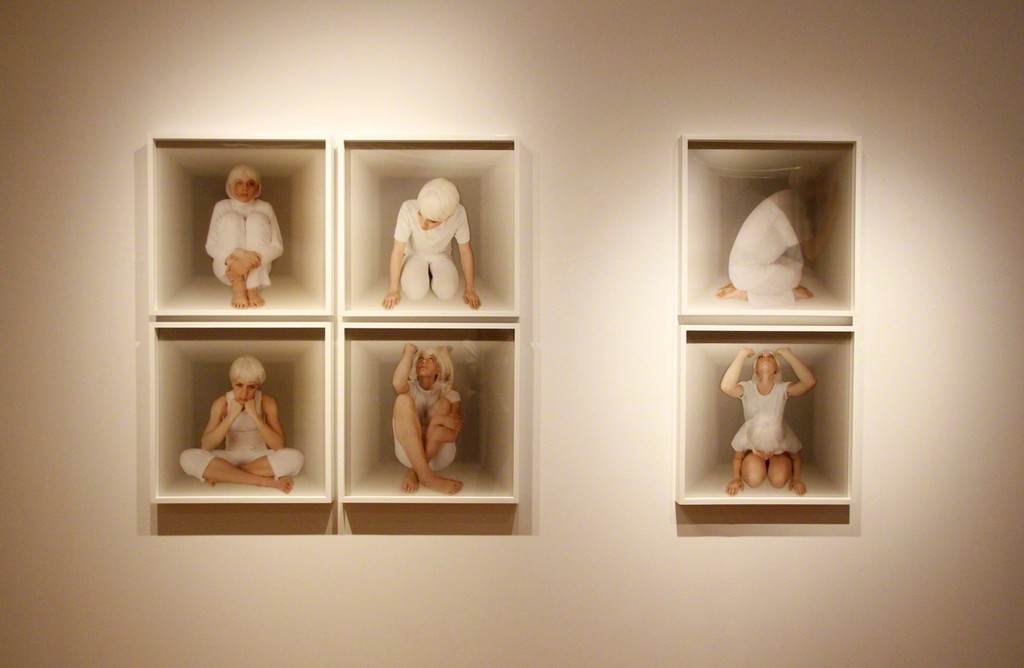 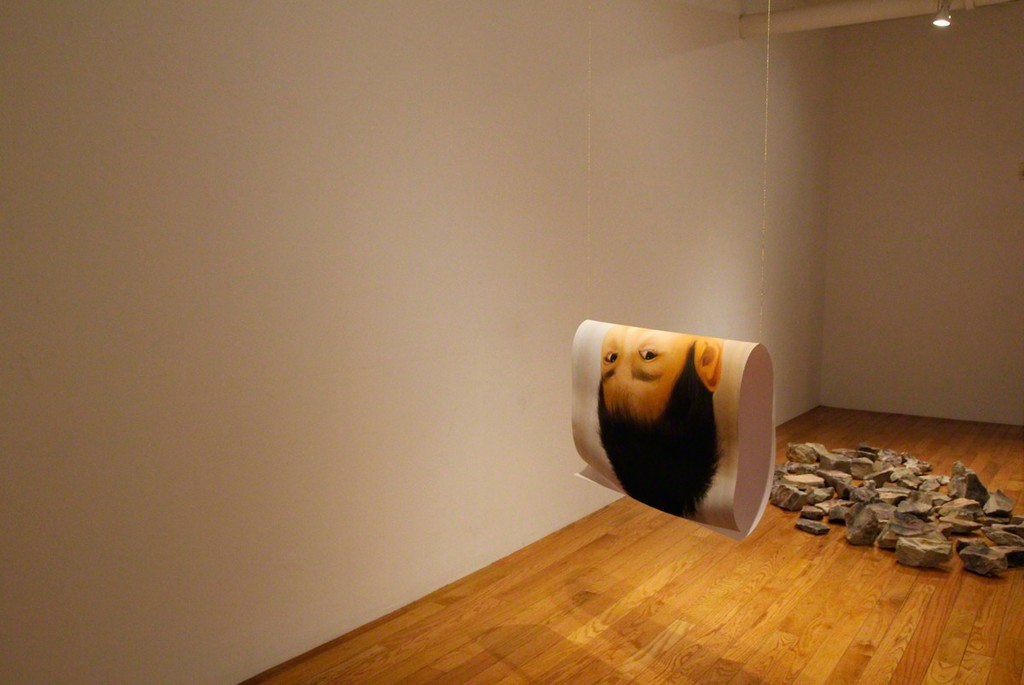 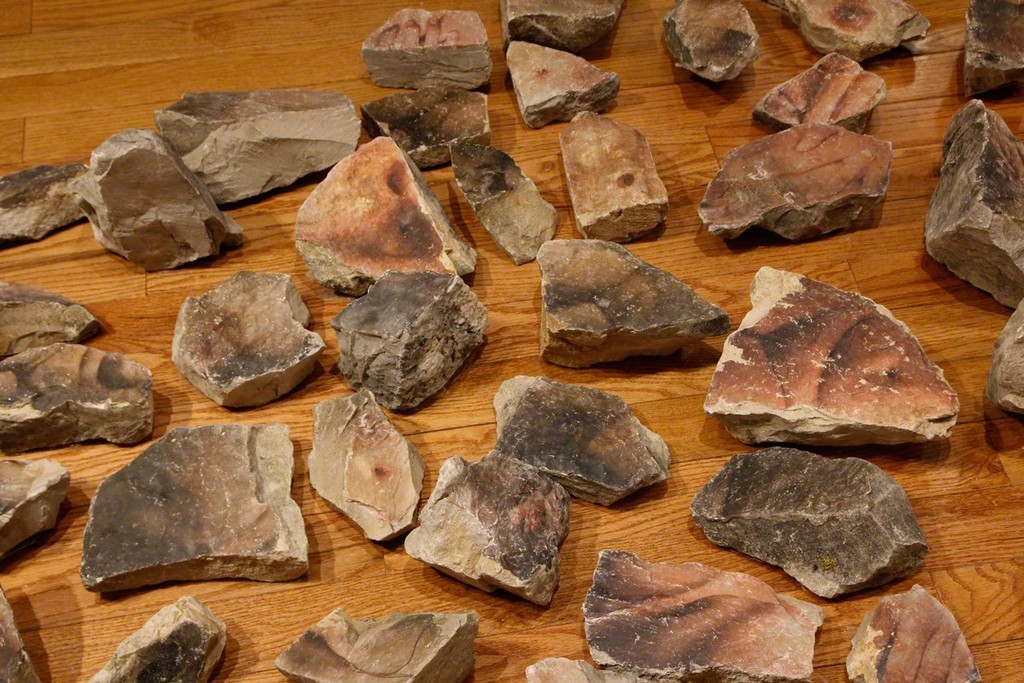 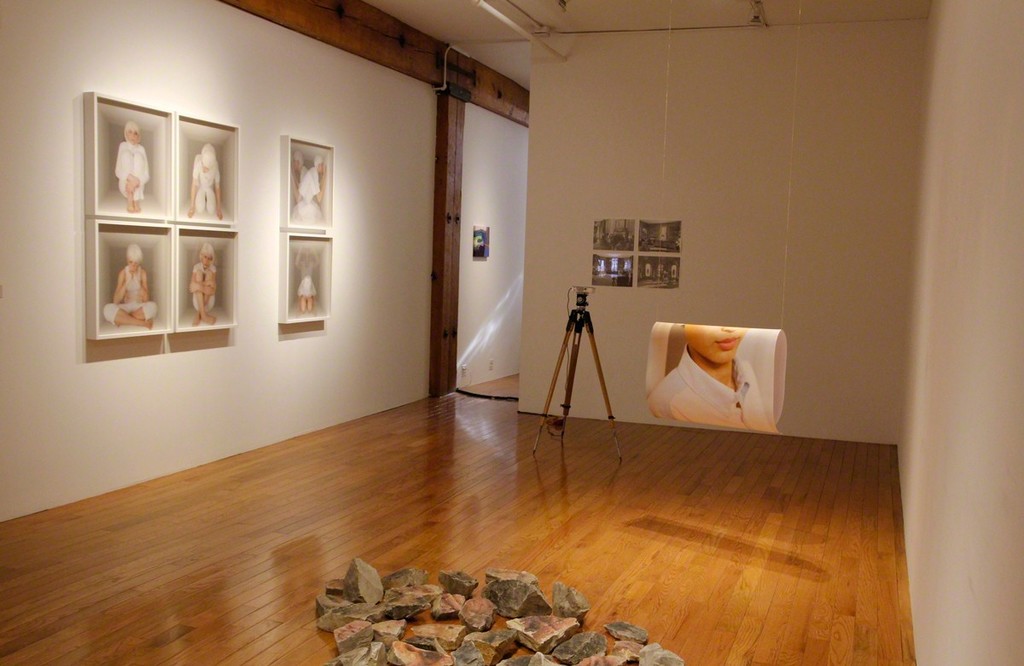 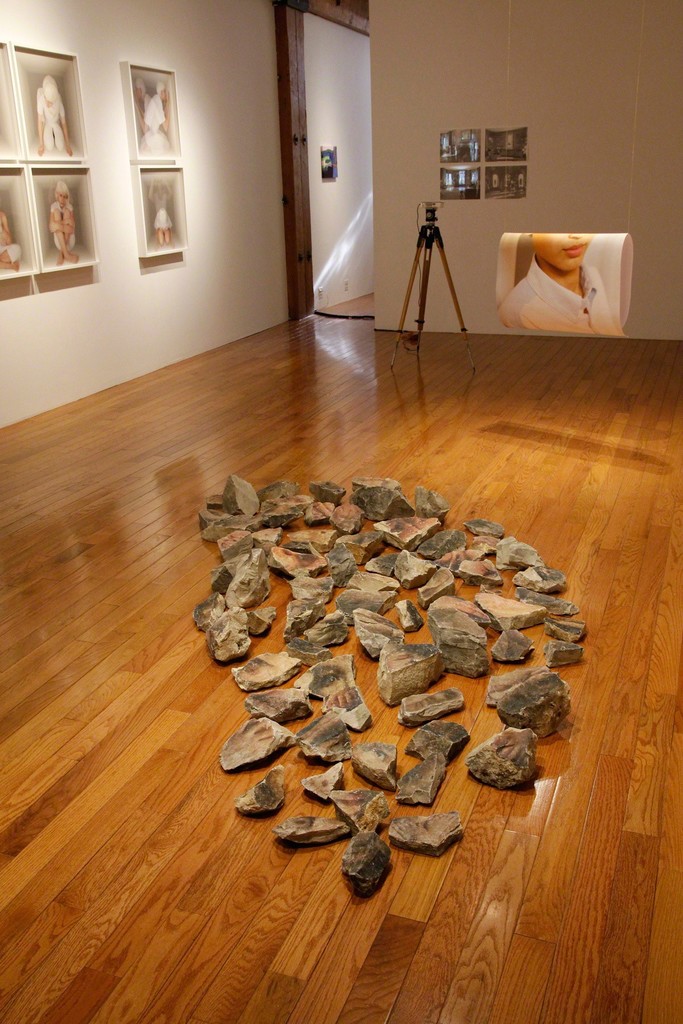 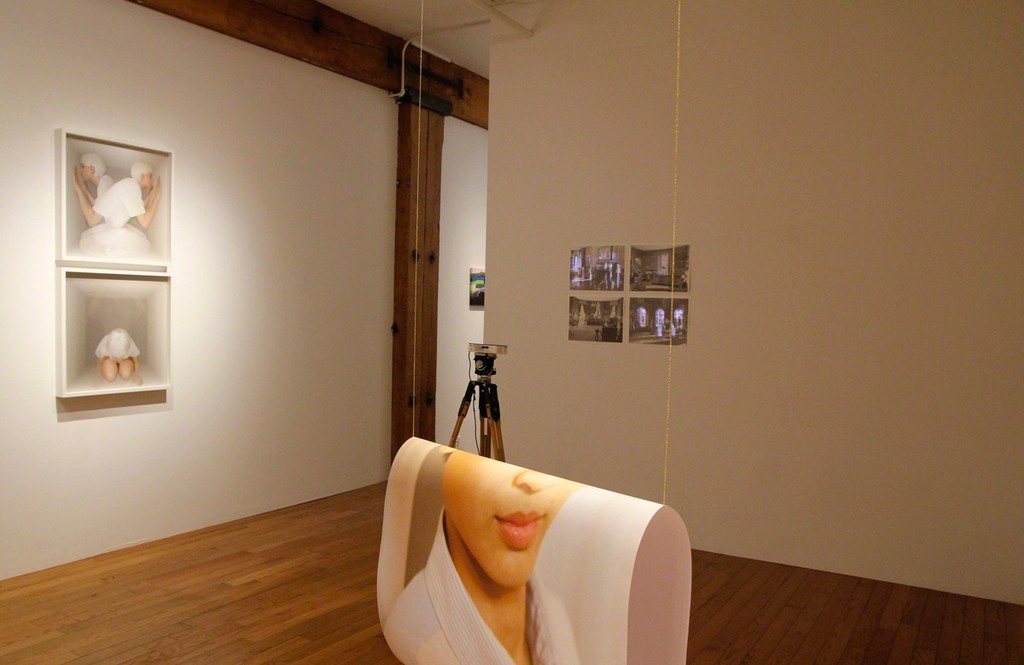 From January 5 to February 18, 2017, MIYAKO YOSHINAGA is pleased to present Surface Unrest, a group exhibition featuring works by four emerging/midcareer artists Dana Levy, Taro Masushio, Anh Thuy Nguyen, and Margeaux Walter. The show is curated by Yinzi Yi, an independent curator based in New York and China.. The opening reception will be held on Thursday, January 5, 2017 from 6pm to 8pm.

A camera is generally considered as a freezing gun that shoots, congeals, and objectifies the moving world around us. Surface Unrest microwaves and defrosts these photographs in order to unleash the vibrant forces inherent in the trajectory of the images' formation. While most of the time these innate forces are not visible, this exhibition attempts to reveal how they can shatter the photographic medium by intruding, swinging, fracturing, and fidgeting. In this exhibition of work by four artists, human figures take shape first as printed surfaces, and then as bodies transfigured into a video projection, a 3-D lenticular, a folded sheet, and a pigment transfer on stones.

In Dana Levy's Intrusions: A Ghost From The Future (2014), a video of a present-day public space in a historical mansion is projected onto four vintage photographs of the same space once inhabited by Mark Twain, Arturo Toscanini, and other distinguished intellectuals. The juxtaposition of the original rooms and the present space illuminate the layers of space and time. In this theatrical setting, a ghostlike female (the artist herself) appears as an intruder from the future and gradually meets the past by touching the age-old walls, windows, mantles, etc.
Similarly, Margeaux Walter’s works set human figures in motion. Acquiescence (2009) and Reflex (2009) are 3-D lenticulars of modular portraits in which the subject (Walter) in an all-white outfit moves uneasily within confined spaces as the viewer walks by. The uniformed figure and cubicle space reflect a post-modern digital culture, and yet, the movement in the photos express the emotional distance generated by technology.

Untitled (Shun) (2013) by Taro Masushio is a photo installation with a half-folded photo sheet suspended from the ceiling. A boy’s face, shown only in halves, is candidly captured in his awkward transitional age of adolescence. The viewer cannot have an overall perception of the boy’s countenance and so loses a sense of orientation as the image swings in the air.

In Anh Thuy Nguyen’s work Burden (2015), fragmented photographs of female bodies are transferred onto an arrangement of one hundred stones and presented as a ruin. The psychological and physical pressures women’s bodies bear from the male gaze -- objectification, menstruation, childbirth -- are relieved through the abandoned yet preserved qualities of the stones, which are not petrified or dead, but enlivened objects that delivers force.

About participating artists
Dana Levy was born in Tel Aviv, and lives in New York. In 2015, she had a solo exhibition, Literature of Storms, at Israel Museum. Her films have been screened at The Tate Modern, London, The Norton Museum, FL, Bass Museum Florida, Pompidou Center, Paris, Tel Aviv Museum of Art, Tribeca Film Festival, and the International Biennial of Contemporary Art of Cartagena.

Taro Masushio is a Japan-born artist and writer currently working in New York City. He has been teaching at NYU and held a seminar on experimental autobiography at UC Santa Barbara. His works have been exhibited internationally at Immanence, Paris, De Young Museum, San Francisco, Pacific Film Archive, Berkeley, and 321 Gallery, New York.

Anh Thuy Nguyen is an interdisciplinary artist and fine-art photographer from Hanoi, Viet Nam. Nguyen worked at The International Center of Photography (ICP) as a Teaching Assistant from 2014 to early 2016. Her work has been exhibited at Sotheby’s Institute of Art, NY, The Java Project Gallery, Brooklyn, etc. Nguyen is now enrolled at School of Visual Arts, New York, for an M.F.A in Interdisciplinary Fine Art.

Margeaux Walter was born in Seattle, Washington and now lives in New York City. Her artwork has been exhibited at Winston Wachter Fine Art in New York, Pentimenti Gallery in Philadelphia, the Griffin Museum in Boston, the Tacoma Art Museum, and the Delaware Center for the Contemporary Arts. In 2009 and 2016, the Magenta Foundation chose her as the top emerging photographer in the United States. Her work has been featured in publications such as The New York Times, New York Post, Seattle Times, Boston Globe, and Scene Magazine.