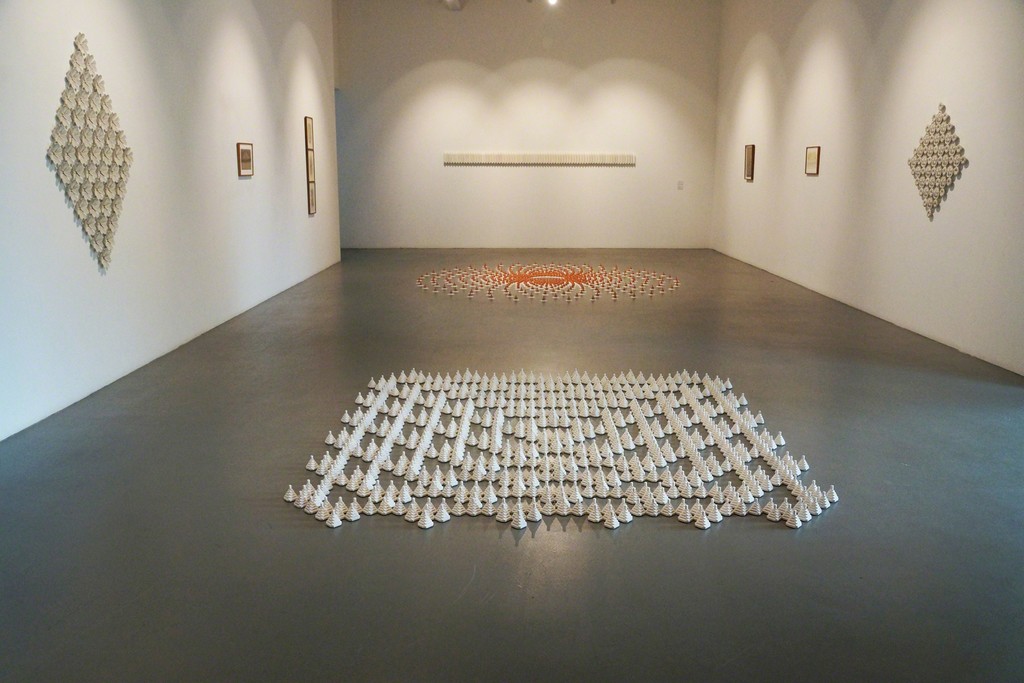 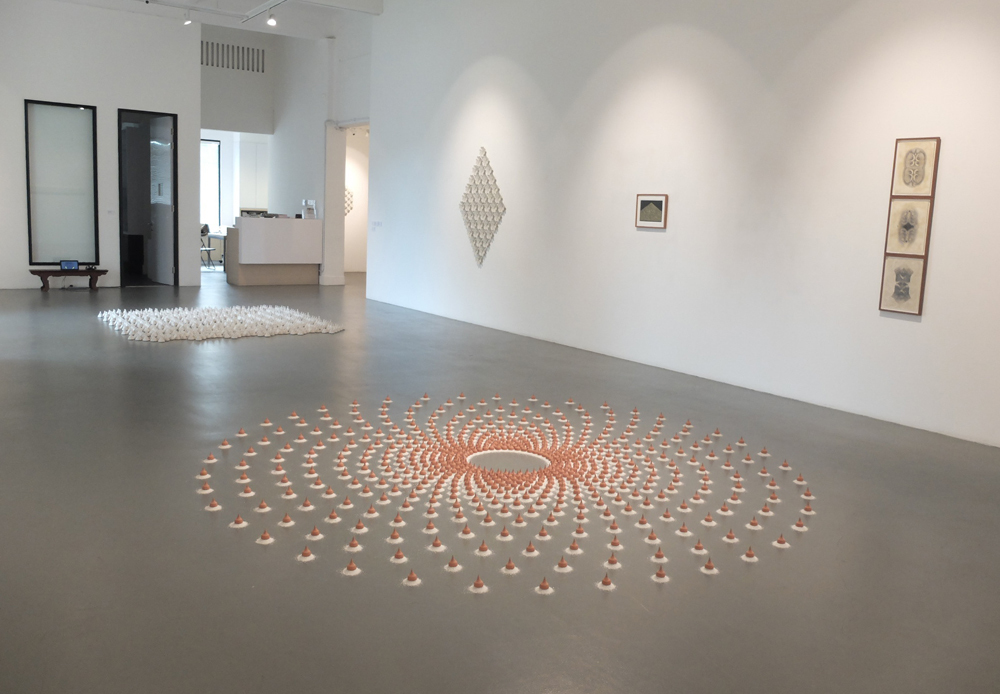 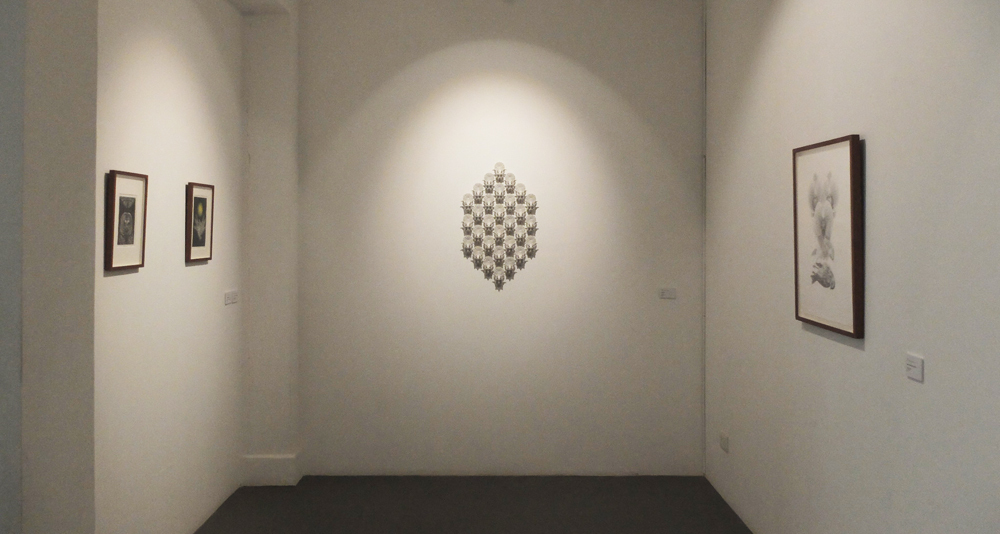 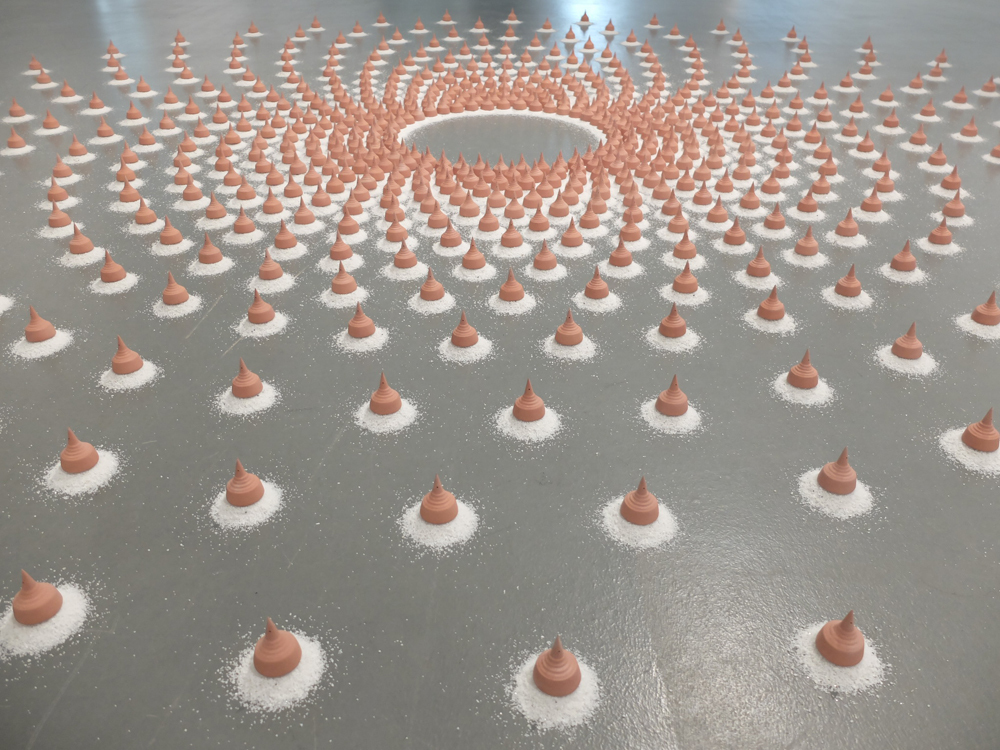 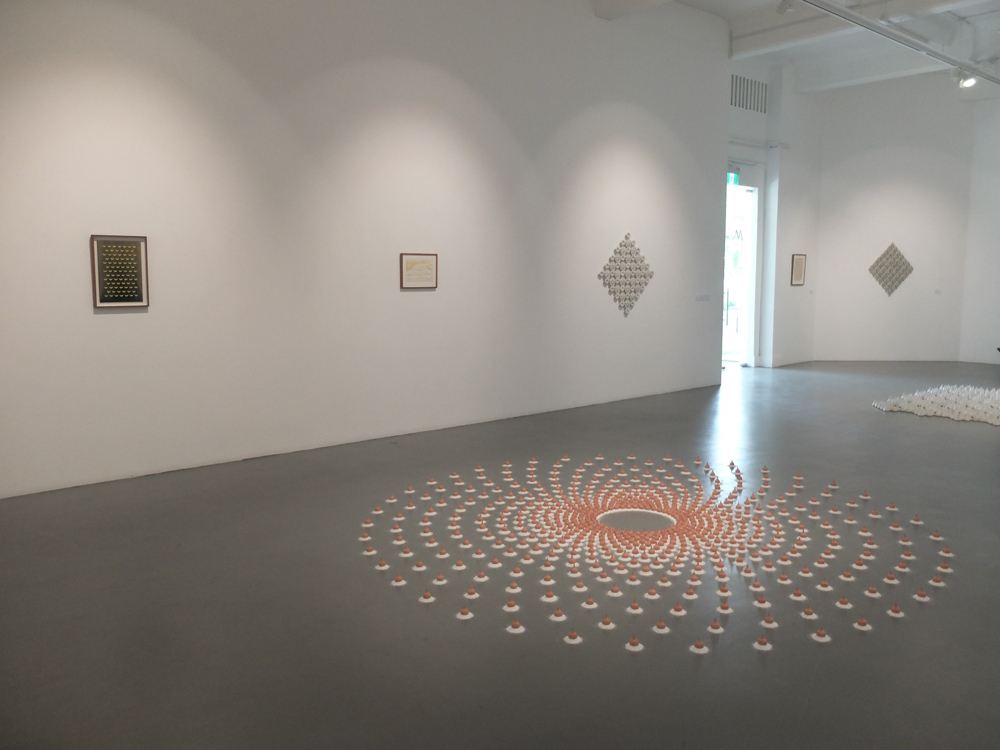 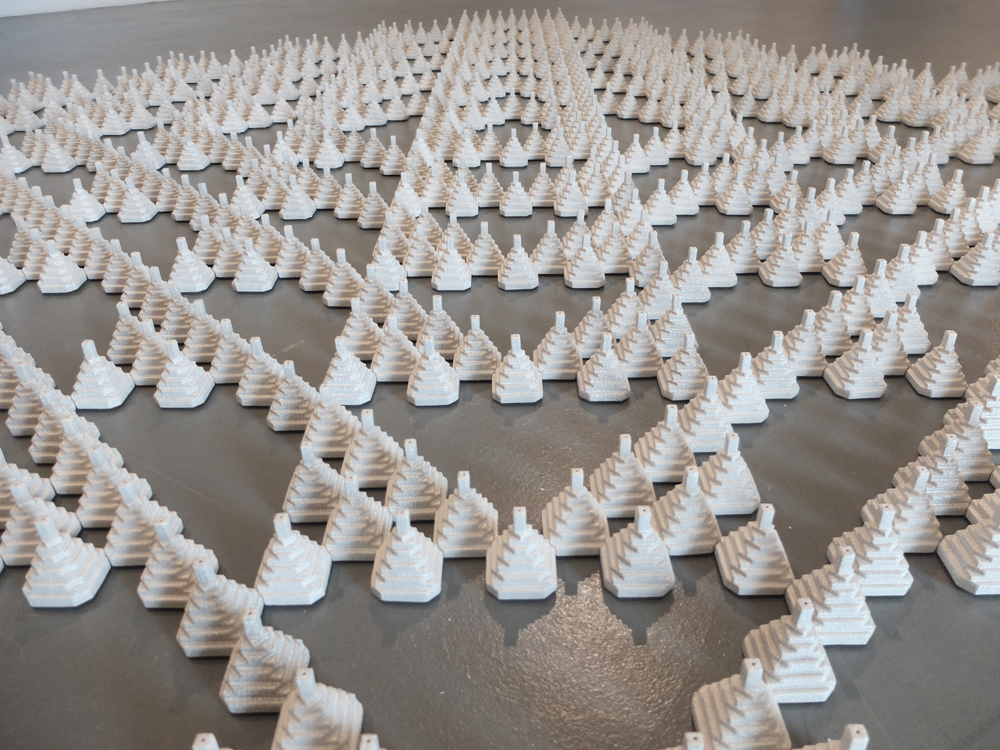 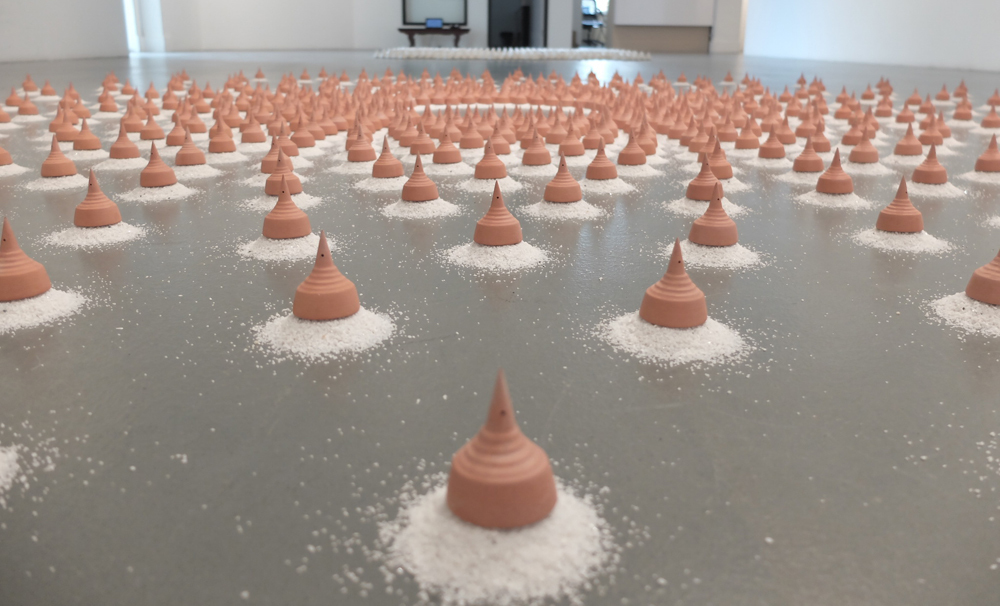 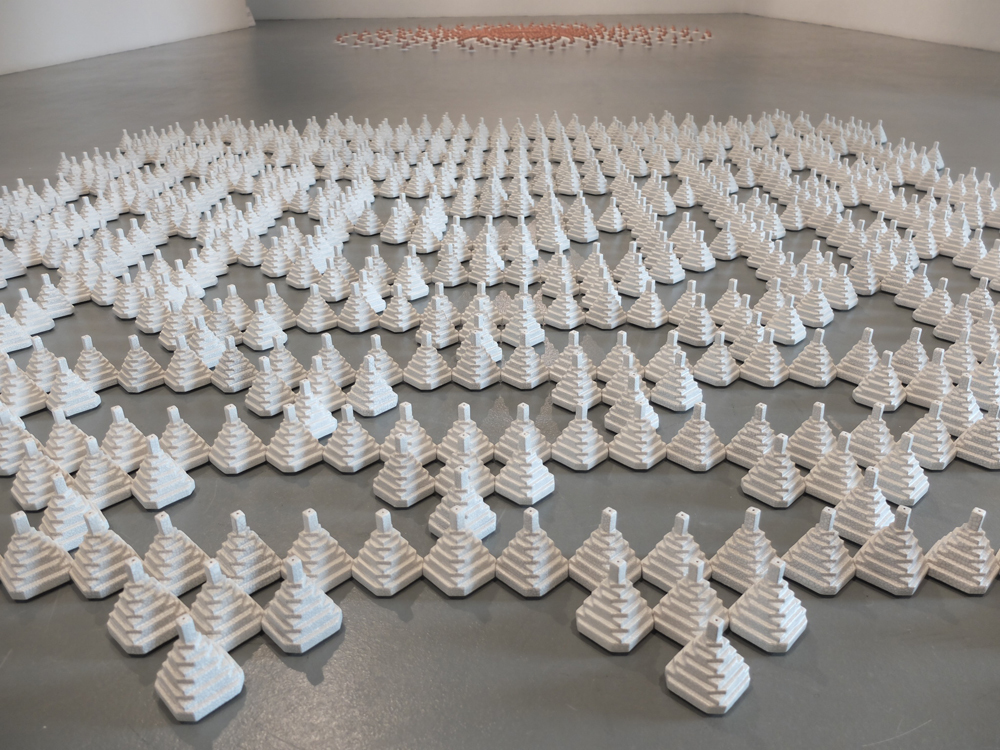 One of the strong characteristic of Albert Yonathan’s works is the geometrically or symmetrically well organized ceramic objects, which is repetitive in it’s own configuration because the all the parts came from the same object. Each part usually represents animal, plant, human or some architectural shapes that resemble a shrine or religious buildings. All of the objects were made in a simplified manner and relatively small in size. To configure all the ceramic objects he has created, Albert uses a very simple geometric pattern or shapes such as triangle, circle, square, hexagon or a diamond shape. Because of the strong repetitive and geometrical arrangements, Albert’s works somehow creates a deep religious or spiritual that is not resemble any particular religious practice but instead deals with cosmological ideas of human interconnection with nature and the universe.
In recent years Albert has created some installations that derived from a ‘mandala’ and ‘labyrinth’ structures. The pattern consisted of repetitive objects that closely resemble a stupa or a temple. Some of the installations were installed during the opening of the exhibition as a performance pieces. Both of Albert’s ceramics and drawings are like a visual mantra, showing shapes and images from nature, all brought into his neatly arranged configuration as symbols. His artistic process can be seen as a process of divination or deification, meaning to separate something from the ordinary environment and worship it sacred. It is one way among many others to find spiritual awareness in the interconnection between human, nature, and the universe. The word ‘apotheose’ or ‘apotheosis’ is synonym to the word divination, which means to exalt or to glorify something, to transform something ordinary into something considered divine. Albert’s works are about finding spiritual awareness outside the boundaries of institutional religion.
The exhibition will be showing two of his new mandala installations and some other works including drawings and prints. He also invited one of his friends Tunyaporn Hongtong, a writer who lives and works in Bangkok, Thailand to write a short essay as a response to the main idea of the exhibition. The essay that will be presented later in the catalogue is not a curatorial writings but instead a form of free creative writing as a way to view the concept that Albert has been drawn into in his works in a different form.

Albert Yonathan Setyawan graduated from Bandung Institute of Technology, majoring in ceramic art in 2007 and finished his master degree in 2012 at the same university. Since the end of 2012, he moved to Kyoto, Japan to continue his study in contemporary ceramic art at Kyoto Seika University and is now finishing his master degree in ceramics craft department and will proceed to doctoral course next year. He has participated in several important group exhibitions in Indonesia, Singapore, Thailand, Italy and Japan, including the 55th Venice Biennale as one of the artists representing Indonesian Pavilion. His last solo exhibition was at Mizuma Art Gallery Tokyo, entitled Enshrined.