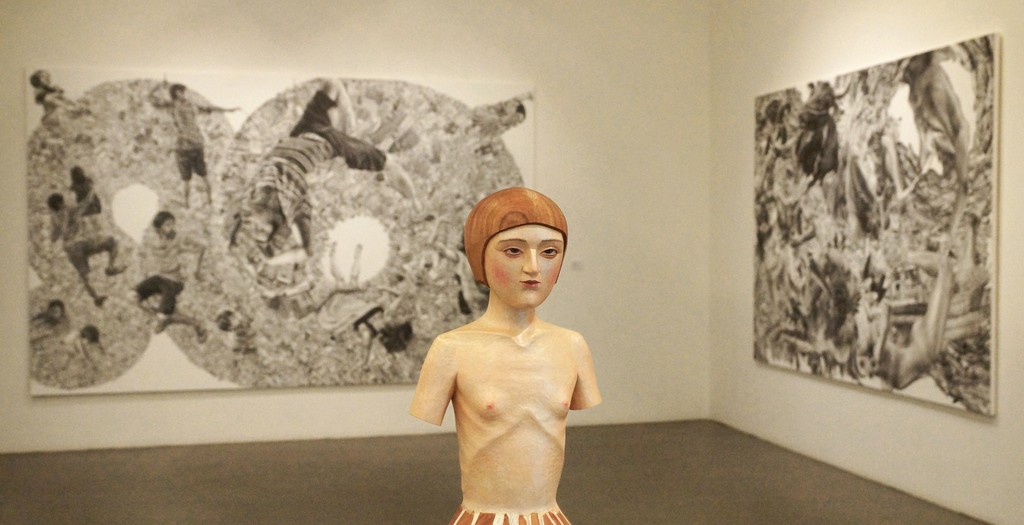 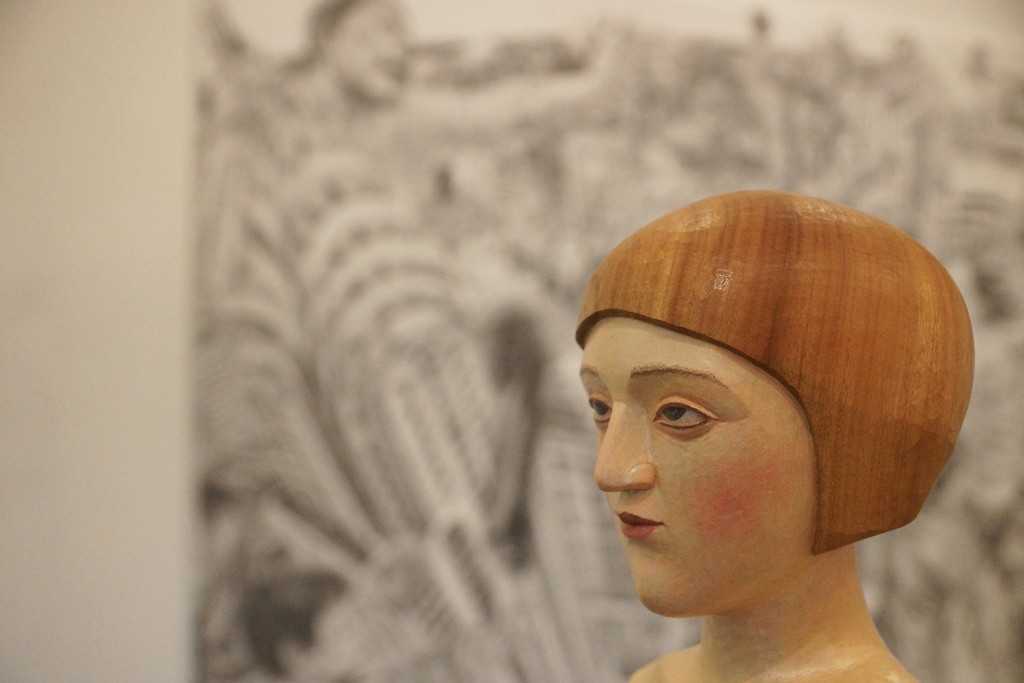 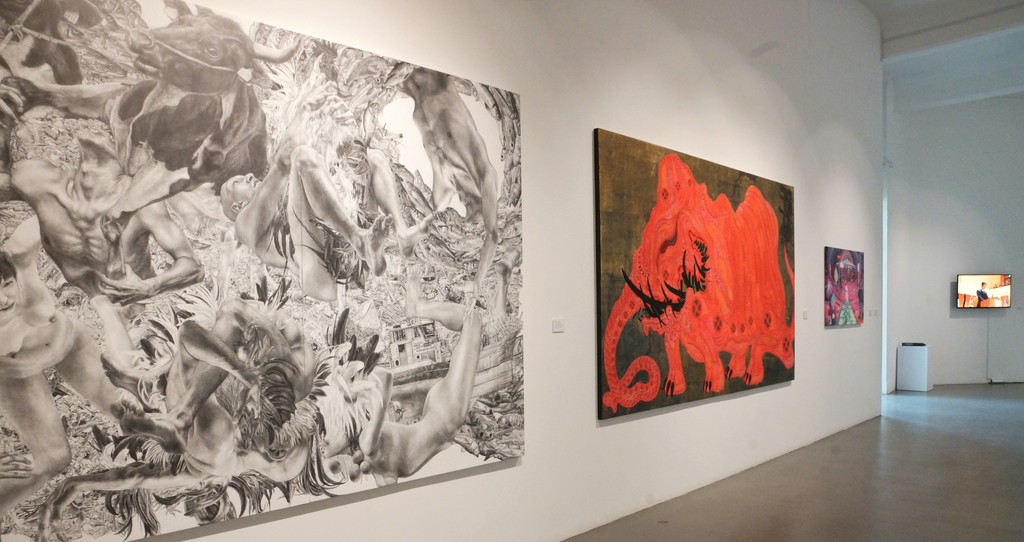 Further towards the future speaks about one's interpretation of the future to multiple extends.

Bringing together nine Japanese contemporary artists working on varied mediums, we are made to question what the future holds – is it of hope or fear? Right or wrong? Will justice prevail over evil? The unknown of the future is the main theme which cuts across this exhibition.

In this exhibition, we have KUMAZAWA Mikiko whose wild, highly detailed pencil drawings take reference from objects, situations, scenes, and panoramas of everyday urban life. She infuses this with a surreal, manic energy. For her, it is painful to live a life surrounded by the demands of our society and the consumerist desire. However, she believes that no matter how complicated the world we live in, those who have the strongest intuitive understanding of it seems to be the children.

For O JUN, working with oil enforces a sense of tension, like being “on one's best behaviour”. In his oil paintings, he works in an intuitive manner, allowing images to spill forth from within his hand. Passing beyond mere likes or dislikes, he becomes aware of the consistencies between the man and this world, which he finds is at once sad and strangely funny.

EGUCHI Ayane's oil on canvas works reveal the contradictions of things. Within one landscape, one experiences the extremes between the lovely and the unpleasant, life and death, and yet all these exist in harmony. Seemingly “cute” living beings appear, and then seem to disappear into mysterious sceneries. Theirs is no more than a world in which contradictions and inconsistencies are revealed: like our own lives.

TANADA Koji's wooden sculptures are of ichiboku-zukuri technique: the whole work is made from one piece of wood without additions. Being carved intentionally from a single mass gives them purity. Here, he emphasizes on adolescence: the quality of not yet being an adult, yet already no longer a child. For him, there is a sense of incompleteness to humans in this state, yet as an existence, there is a pure kind of beauty in it. Their appearances are intermediary – they are what lies between man and God, nature and humanity, the individual and the society; they symbolize the transcendence of all boundary lines. Theirs is a powerful existence in the midst of flux: a fleeting, flickering moment within the perpetual transformations of the process of growing up.

KANEKO Tomiyuki's painting showcases an ancient wild elephant (or “Raja Gaj”), a scary giant elephant that appeared in the densely wooded area of Bardiya National Park in Nepal, where it killed two villagers around 1990. Because of its impressive size, it is also revered and worshipped as a god. Kaneko tried to paint the elephant from his own imagination. He ornamented this wild elephant with magatama (droplet-shaped curved beads) marks symbolizing “four gods”. Such awe of gods and hope for peace are aspects that he aims to reflect in the “four gods” symbols and the evil-preventing red colour.

KONDOH Akino's “KiyaKiya” animation video touches upon childhood experiences. The term “KiyaKiya” comes from the old Japanese expression “mune ga kiyakiya suru”, which the artist first encountered in a book by Shibusawa Tatsuhiko. The expression, which describes “an enigmatic, nostalgic, disturbing feeling”, or an impression of déjà vu, is at the core of her “KiyaKiya” series. Kondoh experienced as a child there was a book she used to read everyday when she went to the hospital. One day, as she was reading
it, suddenly the ending had changed. Sometime later, when she read it again, it had returned to normal.
In our everyday routine, there are moments when suddenly we feel like something is different. This unexpected change, like in her memory, feels like it has a kind of reality.

YODOGAWA TECHNIQUE's sculptures and video speak of the everyday life by the river and their creation process. As civilization grows along the river, humans pollute the river ecosystem. The group's artwork has an element of playful irony where they use garbage – the very thing that pollutes the river ecosystem – and transform them into colourful and beautiful fish sculptures. The group focuses on the concept of “Gomunication” which derive from the word “gomi” or rubbish in Japanese and “communication”. By finding garbage along the riverbank, in the ocean and everywhere in town, the group gets to know the local community and be involved in their everyday life. They are renowned for making works in various places, interacting with locals and doing community projects. Their way of communicating through their art and projects always brings a new perspective for locals and raise awareness for environmental issues.

YAMAMOTO Ryuki's paintings often deal with humour and self-propagation. The pictures that he paints do not show sceneries as fantasized by the artist, but they are self-portraits that emerge in the process of one man's self-relativization. His paintings are not showing struggling losers, rather, they depict the strong will of a man who is eager to engage in a never-ending procedure of self-relativization.

Lastly, AIDA Makoto shows his video work: a fictional story, although not explicitly meant as a satire of the actual Japanese Prime Minister. During a major international conference, the minister makes an impassioned plea for each and every country in the world to revive the system of sakoku – a closing off, or severe limiting of foreign trade and diplomatic relations that Japan embraced during the Edo period. To him, globalism is at the root of many evils facing the world today, and his plea for a return to isolationism is meant as a tool for achieving world peace. Reading aloud from a script in awkward and faltering English, the minister seems annoyed by his own ineptitude with foreign languages. The audience may have a complex evocation of right and wrong, and of justice and evil, with respect to this man.