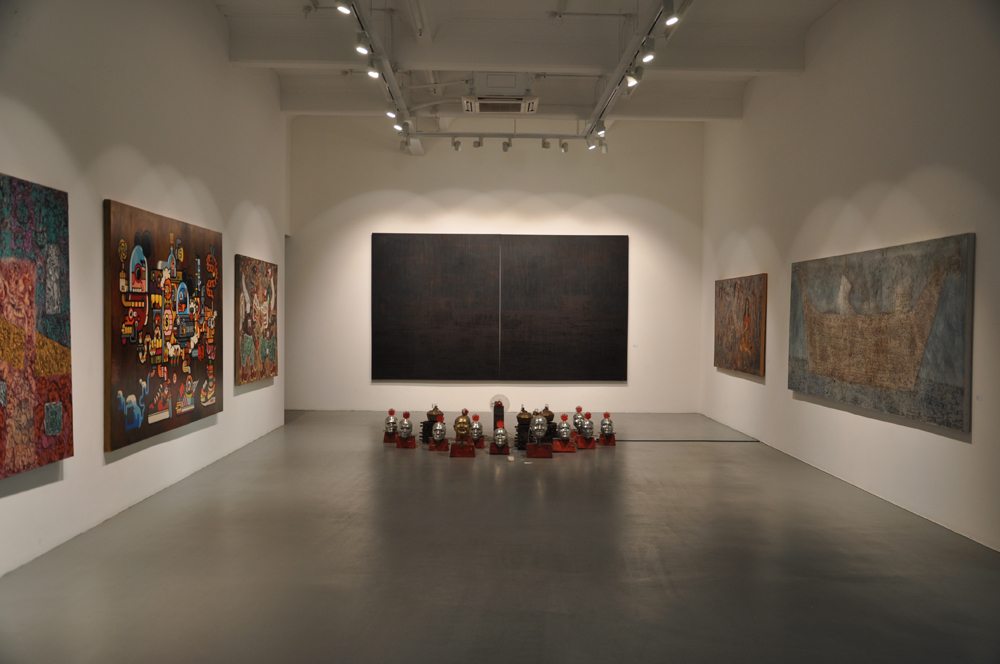 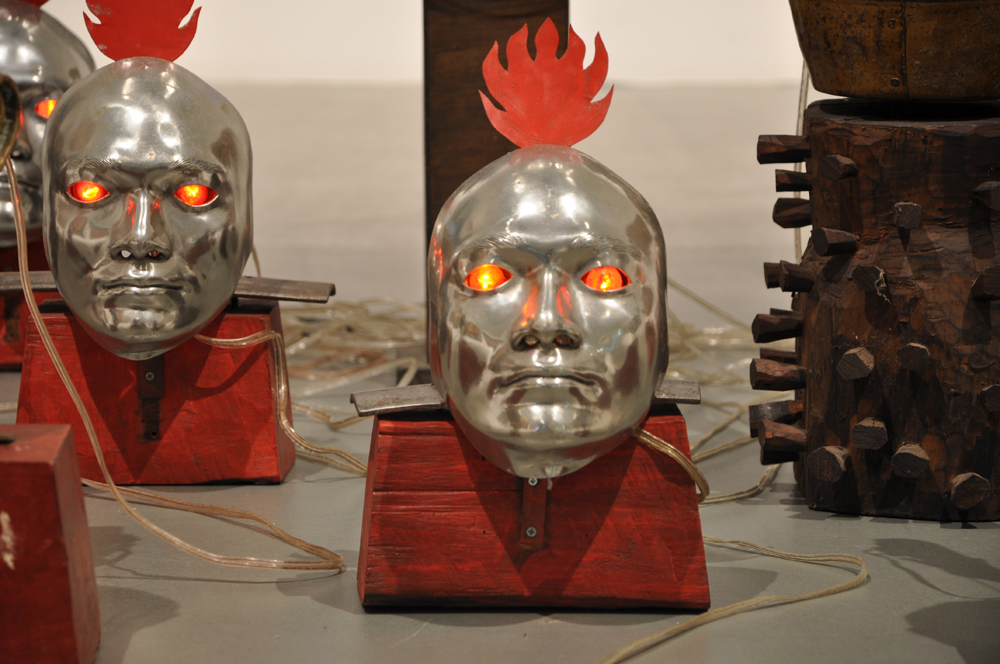 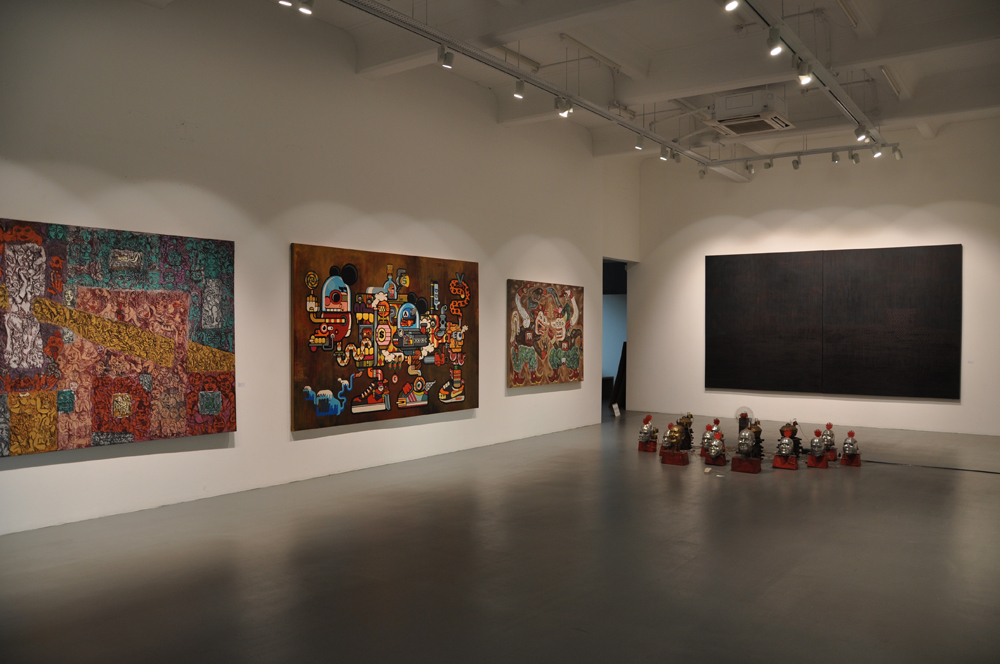 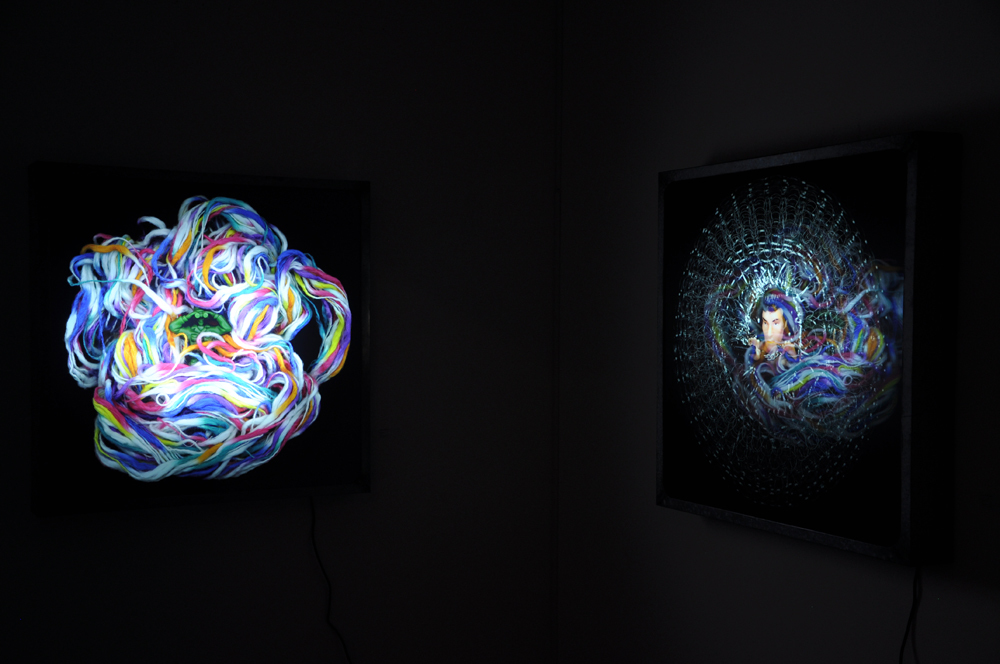 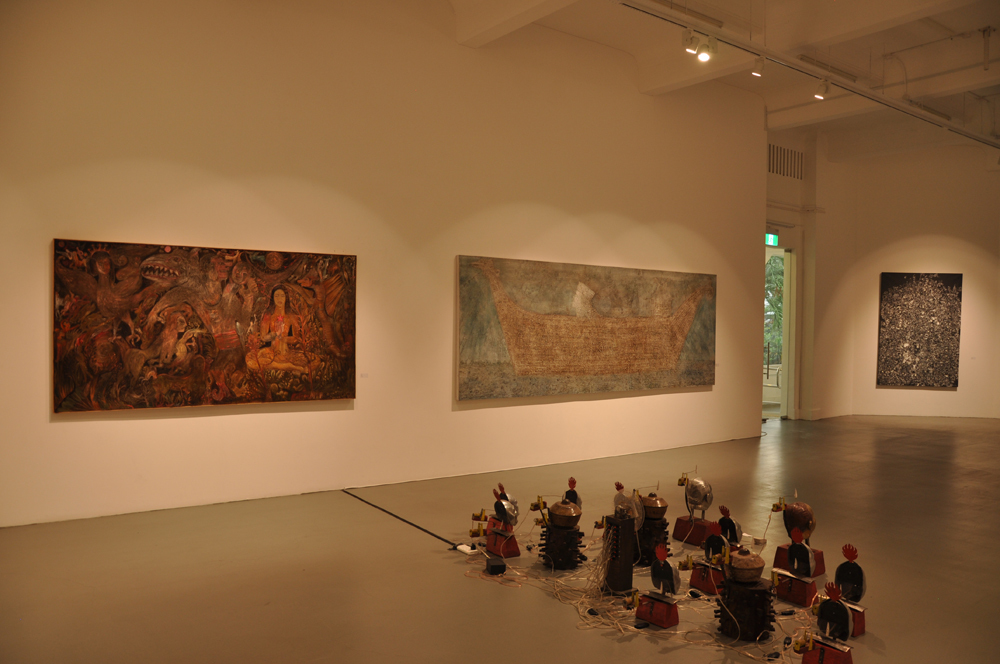 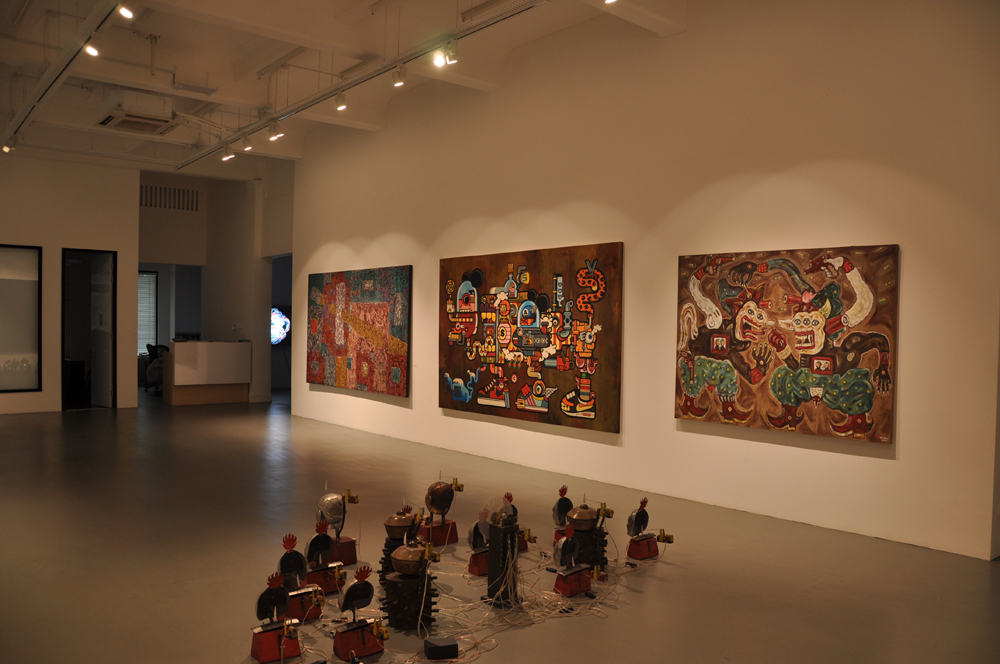 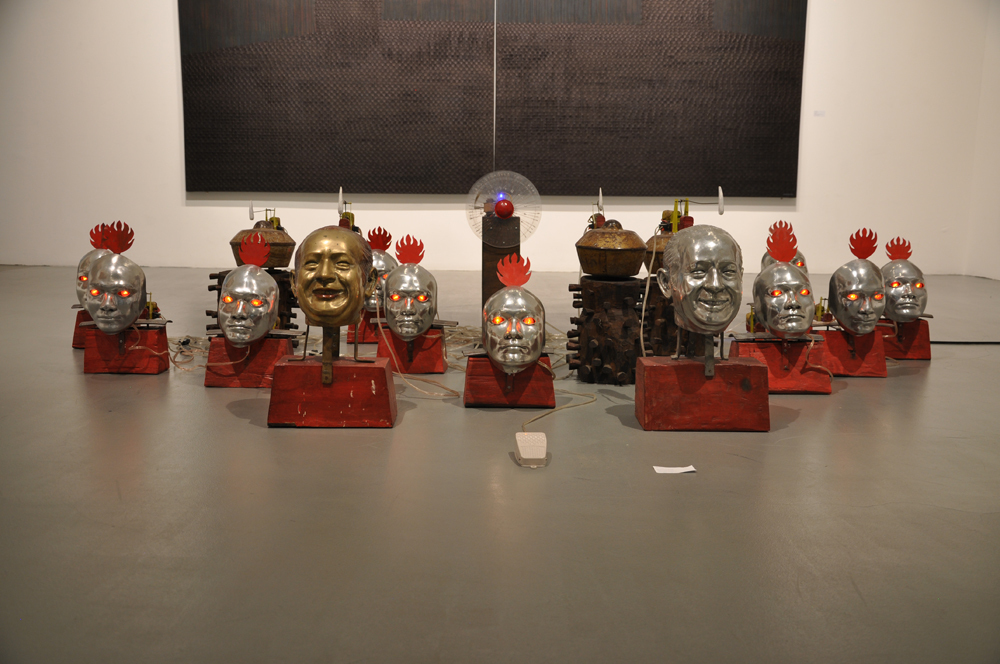 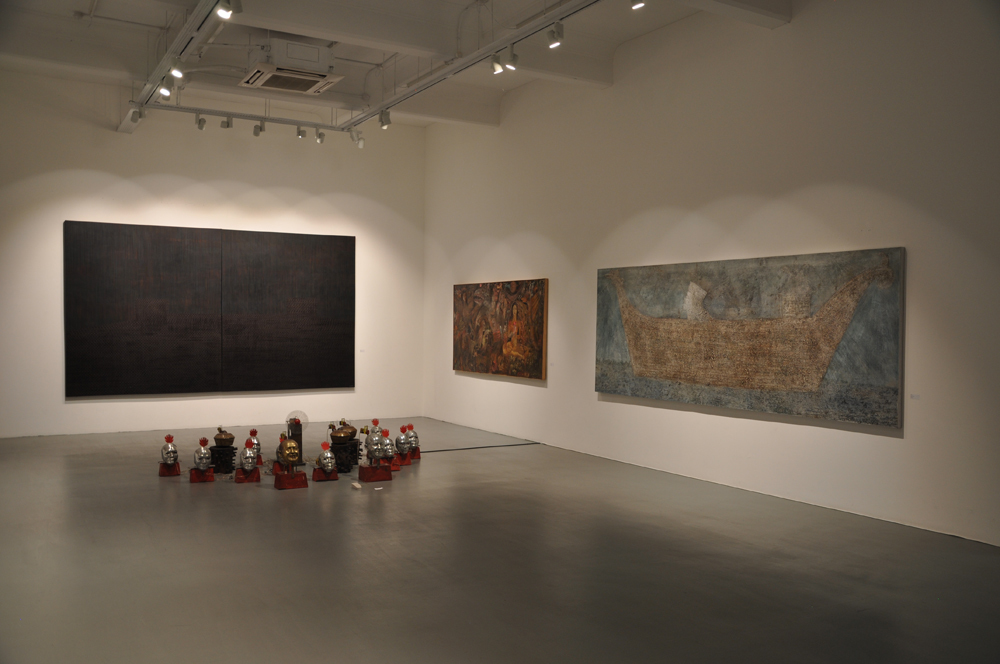 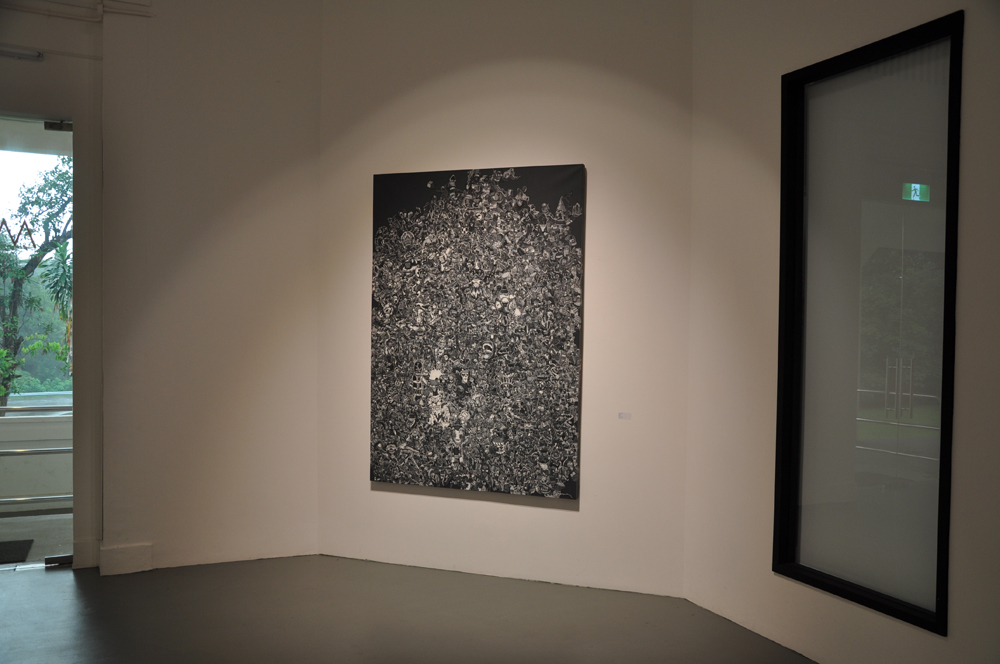 Mizuma Gallery is pleased to present VERSUS – Indonesian Contemporary Art, a group exhibition featuring artworks by made wianta, i made djirna, Heri dono, Nasirun, Angki Purbandono, Indieguerillas, Yoga Mahendra and Agus Novianto, from 18 october through 22 december, 2013. The exhibition opening is timed to coincide with the opening of the centre for contemporary art at Gillman Barracks on 23 october, as well as the Singapore Biennale 2013 - If the World Changed that features an installation by Nasirun.

VERSUS traces the aspects of “diversity” in contemporary art, presenting Indonesia as an ideal territory for the approach. The exhibition seize the opportunity to contextualize indonesia not only as a mere location, but as the fated motherland of a variety of contemporary voices. VERSUS explores intricate and unique combinations of values and sensibilities. Layers of realities in timeless juxtapositions of patterns uncover the underlying context. The show aims at the horizon beyond the question of tradition versus modernity in contemporary art.

Made Wianta (b. 1949, Tabanan, Bali) is one of the most influential figures behind the development of Balinese contemporary art. First his challenge was to devise concepts that would enable the development his own art and culture while aiming at the universal. In his recent work, the visual references to Balinese identity are blurred, his work more abstract, minimal and essential. Wianta was part of the 50th Venice Biennale in 2003.

I Made Djirna (b. 1957, ubud, Bali) grew up in a place untouched by the modern world until the late 70’s where people relied on customs and religion to achieve peace and well being, using their hearts rather than logic. This is the background of djirna’s creative process.

Heri Dono (b. 1960, in Jakarta)’s multidisciplinary practice follows the absence of division between traditional art forms in indonesia, mixing Hindi literature, wayang puppetry, animism and Javanese metaphysics with indonesian activism and recycling techniques, a wicked sense of humor, and a commitment to social relations and justice. Always travelling, he is the most international contemporary artist of indonesia.

Nasirun (b. 1965, cilacap, central Java) grew up in an isolated place, alienated from the modern world to which he never grew fully acustomed to. Nasirun translates current political, social or personal issues into magical Javanese iconography and philosophy, like looking into our world through a Javanese stage play. His work which is met with a wide success among indonesia’s leading collectors will be featured in the Singapore Biennale 2013.

Angki Purbandono (b. 1971, cepiring, central Java) is the most important figure of indonesian contemporary photography. widely known for his ‘scanography’, Angki questions the role and existence of the camera as a tool. His work inspired by Man Ray’s “Rayographs” closely relates to his daily life experiences.

Indieguerillas (Santi Ariestyowanti, b. 1975, semarang, central Java & Dyatmiko Lancur Bawono, b. 1972, semarang, central Java) Husband and wife duo, “miko” and “santi” started their unit as a graphic design firm, but they are now fully concentrating on art production with great success. Their modern design background and trials to reconnect with their cultural roots, wayang stories and characters, are intertwined in their production.

Yoga Mahendra (b.1982, malang, east Java)’s perspective-less paintings are always over crowded with monster- like characters and details, somewhat similar to traditional Balinese paintings. yet, inspired by the kampong (slums) of the city where he lives, he tackles the issues of the economic devide and interconnections in society.

Agus Novianto translates science and technology into emotional experiences. In Void () “It’s better to cry than to be angry; because anger hurts other, while tears flow silently trough the soul and cleanse the heart”, he brings the audience to feel sorrow through the guidance of light and music, as inspired by the sonoluminescence phenomenon. To accept sorrow is considered as a noble behavior within the norms of Javanese society.