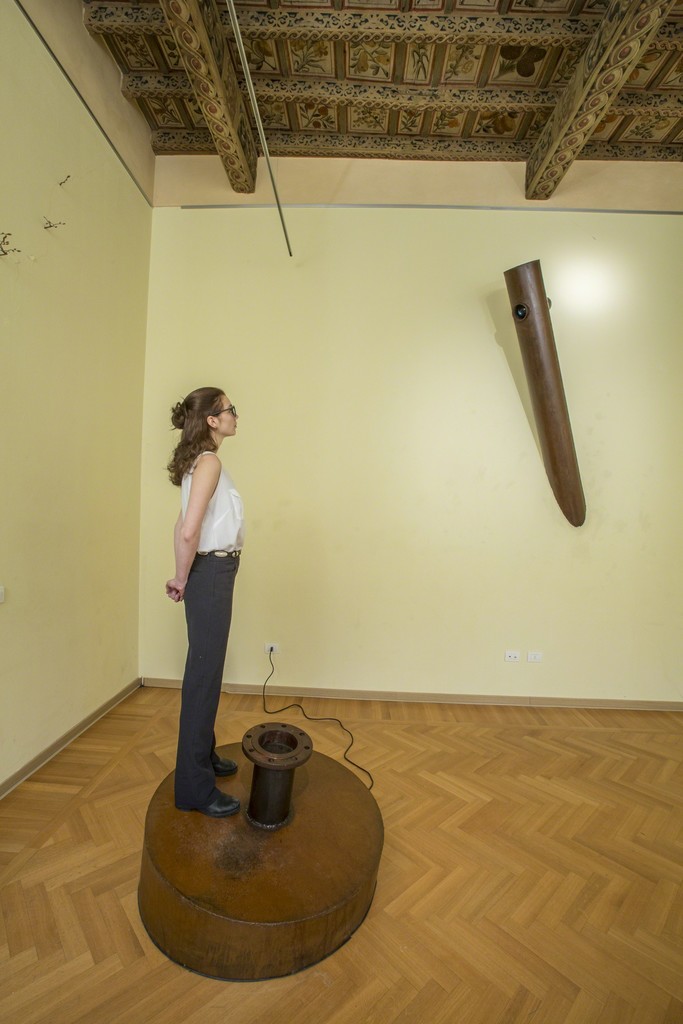 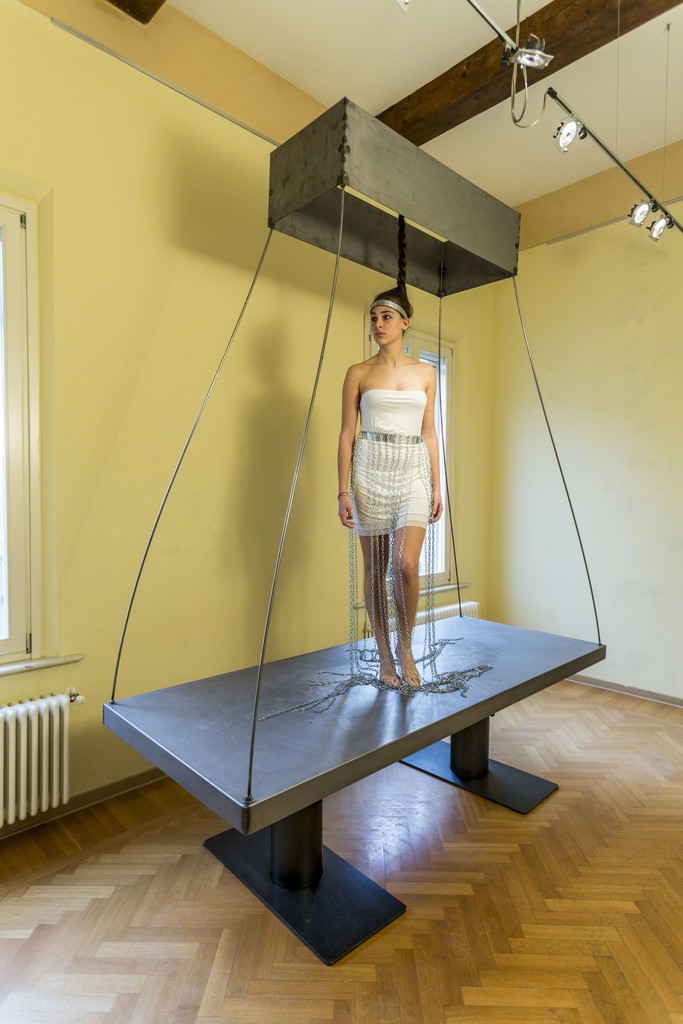 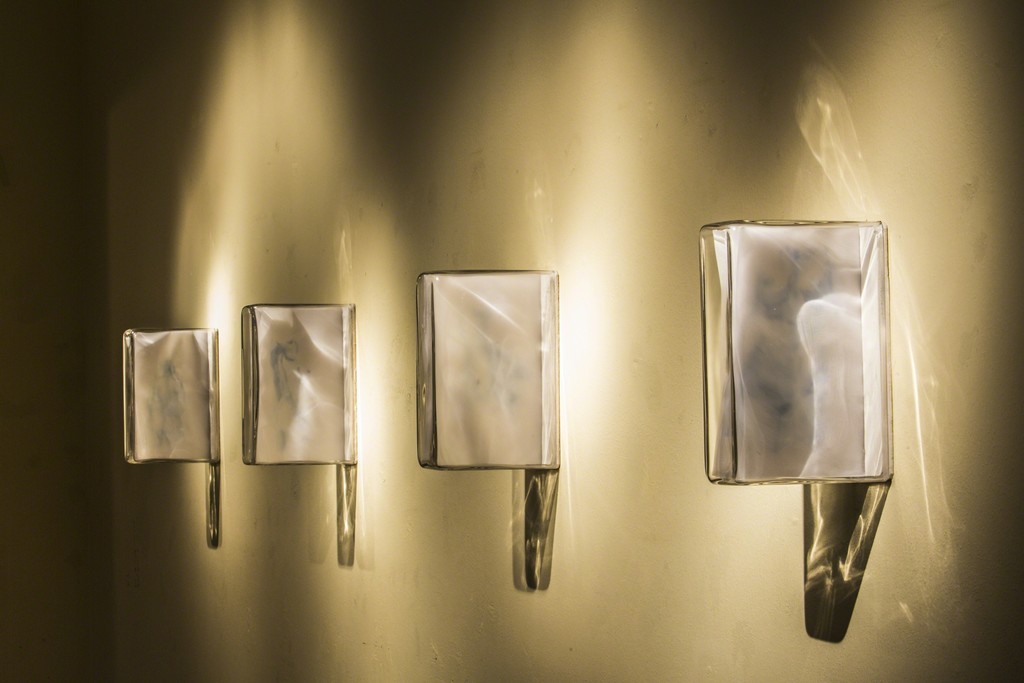 A.A.A.Angelica
Marco Di Giovanni
On the occasion of the fiftieth anniversary of the publication of the "Orlando Furioso" by Ludovico Ariosto,
concurrent with the important exhibition of Palazzo dei Diamanti, the MLB Maria Livia Brunelli asked some
artists to compare themselves with the reading of the poem, to deepen an aspect of it that everyone felt
strongly linked to their own poetics. After Giovanna Ricotta and Stefano Bombardieri, the exhibition
concludes with Marco Di Giovanni, who created a suggestive and poetic exhibition that does not fail to
amaze and excite visitors.
The exhibition project revolves around two fundamental themes: in the first room the warrior women of
the poem; in the second the strong fascination exerted by the Moon.
Angelica and Bradamante are the symbol of the new role that the woman assumed in the Renaissance, but
at the same time they have to fight with a mentality still very much linked to male privileges: both beautiful, the first is expert in magic and destined as a wife to the most valiant knight, the second is a loving warrior who defeats the most valiant knights.
Di Giovanni frames the figure of Angelica, in his being the object of desire to be awarded as a prize, in that
category of women, often beautiful but very unlucky, that the actuality shows us every day by reading the
pages of newspapers, those women who propose themselves through ads like "AAA Angelica ". Di Giovanni
contacted them starting from those ads, and asked them to pose for a portrait, recalling the tradition of the
pictorial nude that in more modest centuries has often seen women used as models. An apparently
irreverent operation, that in reality is fully "cortese" in the medieval meaning of the term, because it
ennobles the woman until she becomes a woman-angel, giving the impression, says the artist, of "fading
elusive and liquid, referring to the fact that one of Angelica's tricks to escape his contenders is to become
transparent".
Bradamante instead is really present in the exhibition as a contemporary incarnation of Artemis, goddess of
the hunt but also protector of virginity and modesty: throughout the poem defends itself from attacks by
petty and violent men for the love of his Ruggero. On show a beautiful girl will fall into the shoes of
Bradamante who, for the duration of the inauguration, will overshadow the spectators, struggling in an
ideal but thunderous duel of metallic sounds.
In the second room instead the protagonist is the Moon, the celestial body celebrated by the poem as a
symbol of the overturn of all that happens on Earth: the only place where there is no madness, which
instead dominates the world, because everyone is constantly looking for what they can’t get.
There are no better words than those of Marco Di Giovanni to tell this second part of the exhibition: "The
main wall will be dominated by an installation with 46 Moleskine notebooks, one for each song of the

poem, all open on the planisphere page divided into time zones; but madness makes us lose every space-
time coordinate, as happens in Orlando, wandering the world to the right and to the left, naked, uprooting

trees, without distinguishing even the day from the night ".
In this way the artist, with pencil, has added on every planisphere mimetic signs with respect to the print, in
order to create an irrational chaos that will confuse borders and continents.

"But two metal structures present in the same room will be our salvation - explains the artist-. The
spectator will be in front of a roughly rusty iron tube of about two meters that seems to be planted in the
wall and then continue beyond. Looking inside a small porthole of the structure, a distant and small blue
moon that moves unstable according to the point of view from which we look at it will appear magical and
light.
Driven by impulse, like Astolfo, we would like to reach that moon, guardian of Orlando's hometown, but to
raise us the only Hippogriff nearby is a second floor-level ferrous structure .... a kind of platform with a
slightly oblique plan compared to the ground . Climbing above the balance is more precarious: here an
optical system plunges us towards the heart of the earth that turns whirling, making us relive the emotion
of Astolfo that, before launching towards the moon, had to face the Underworld ... " .
Both sculptures live by the strong contrast between the roughness of the rusty exterior and the delicate
volatility of the mobile and three-dimensional vision of the interior landscapes. If we have recovered our
sense, then we will realize that hidden in the chaos of lines of the composition of Moleskine, Ariosto
himself has observed us since the beginning of our adventure, with his good-natured look and, as always,
ironic.
(...) the "Furioso" is a unique book of its kind and can - I would almost say must - be read without referring
to any other previous or following book; is a universe in itself where you can travel far and wide, enter, exit,
lose ... Ariosto seems a poet clear, without problems, yet remains mysterious: In his stubborn mastery to
build octaves on octaves seems busy above all to hide himself ".
(taken from "Italo Calvino racconta l’Orlando Furioso")
The exhibition enjoys the patronage of the National Committee for the celebrations of the V Centenary for
the celebrations of the "Orlando Furioso" and the Patronage of the Municipality of Ferrara.