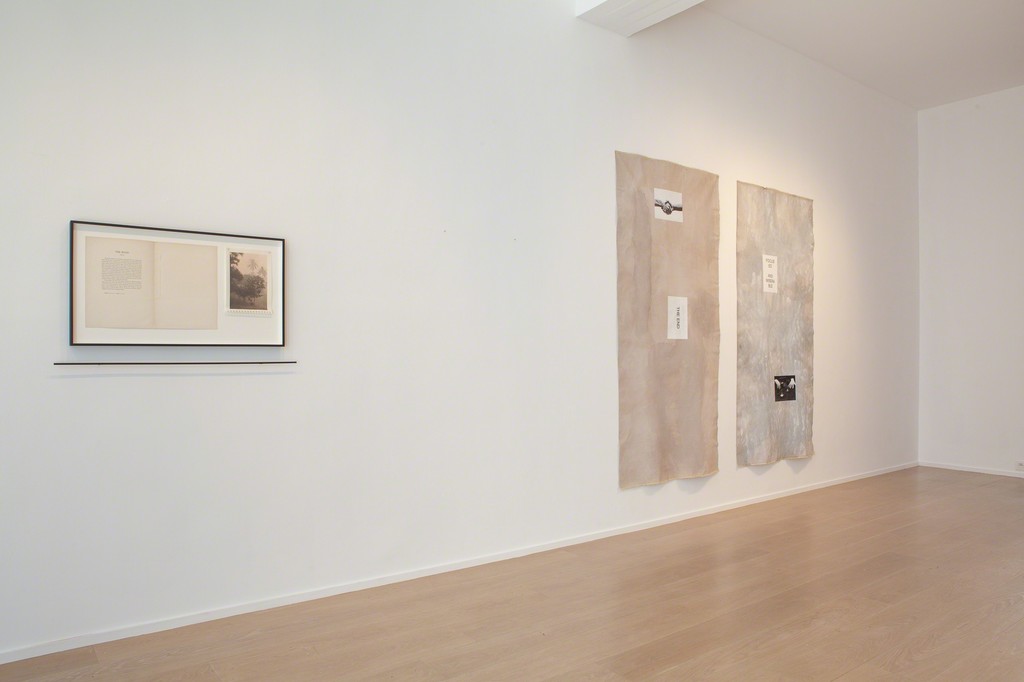 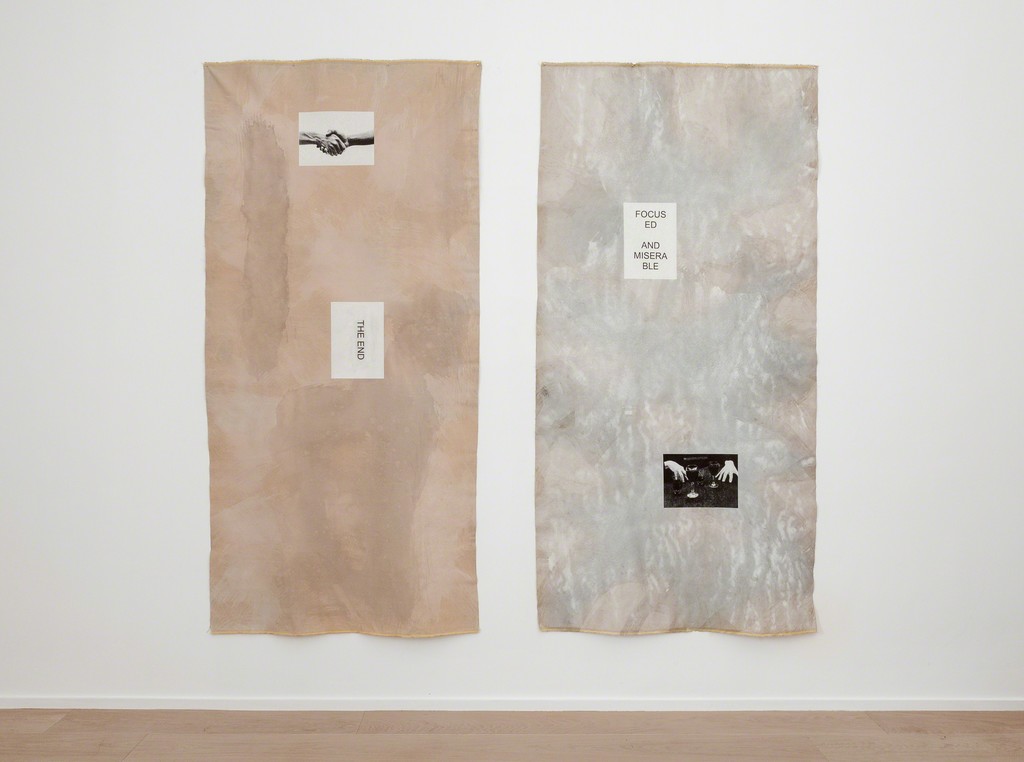 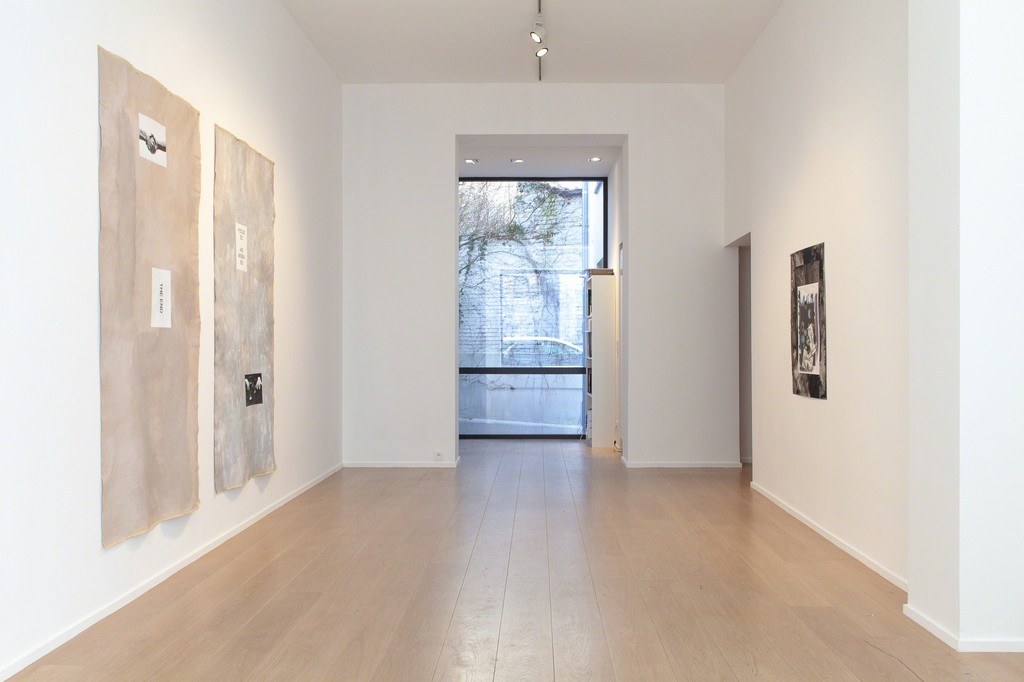 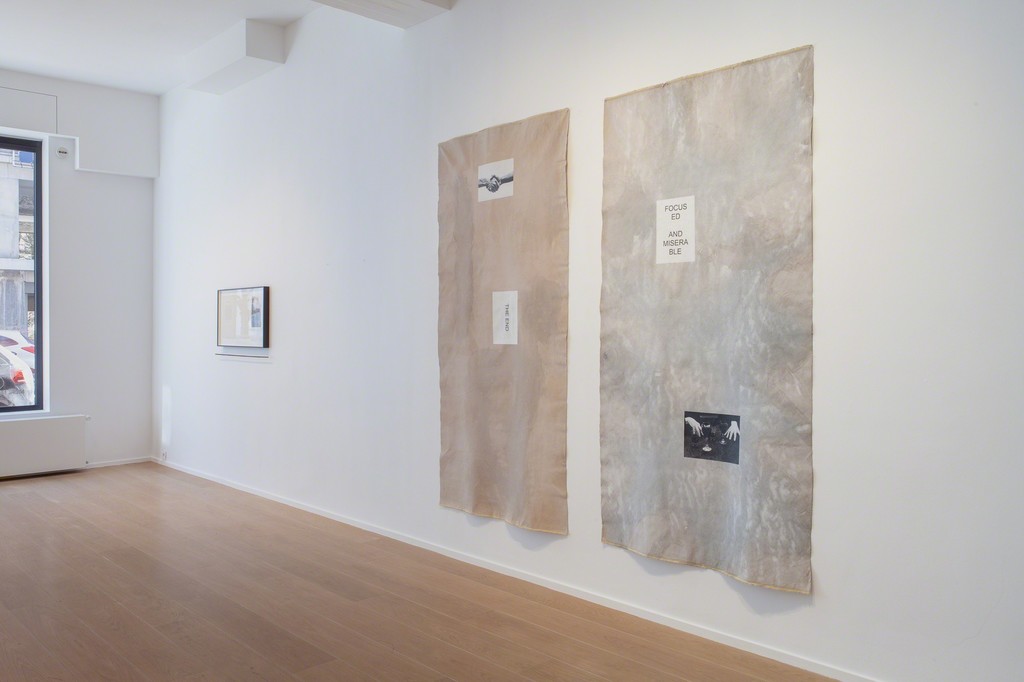 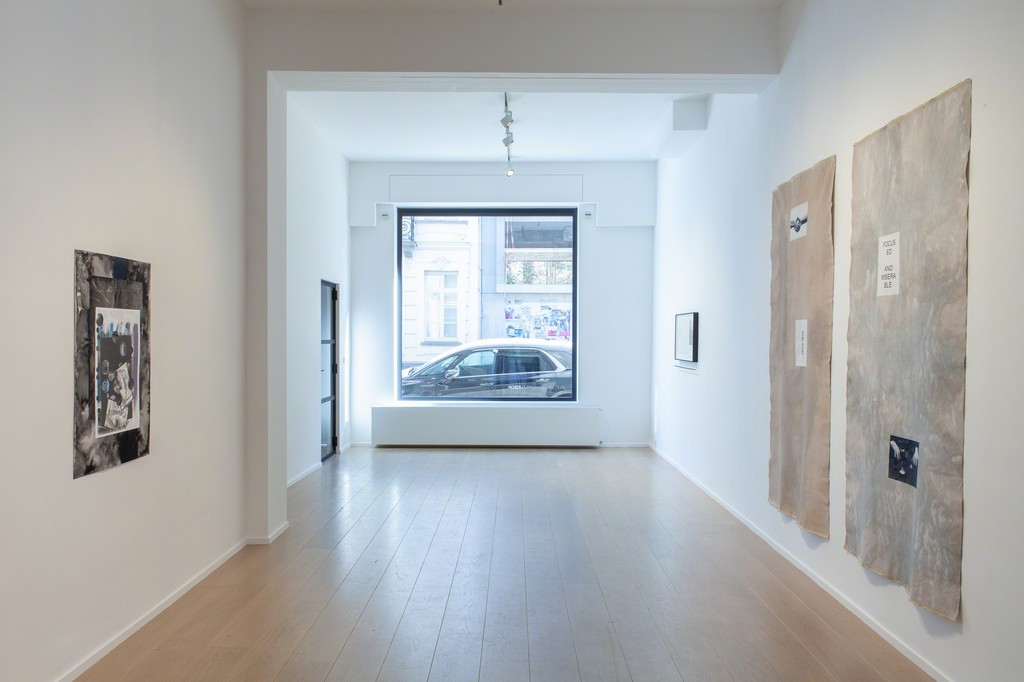 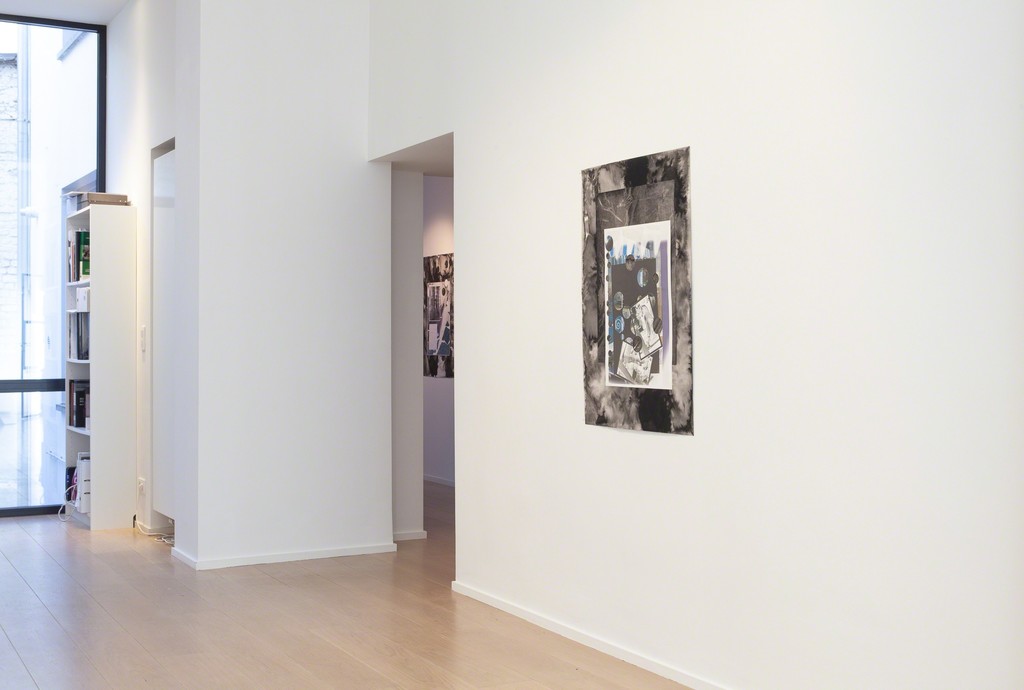 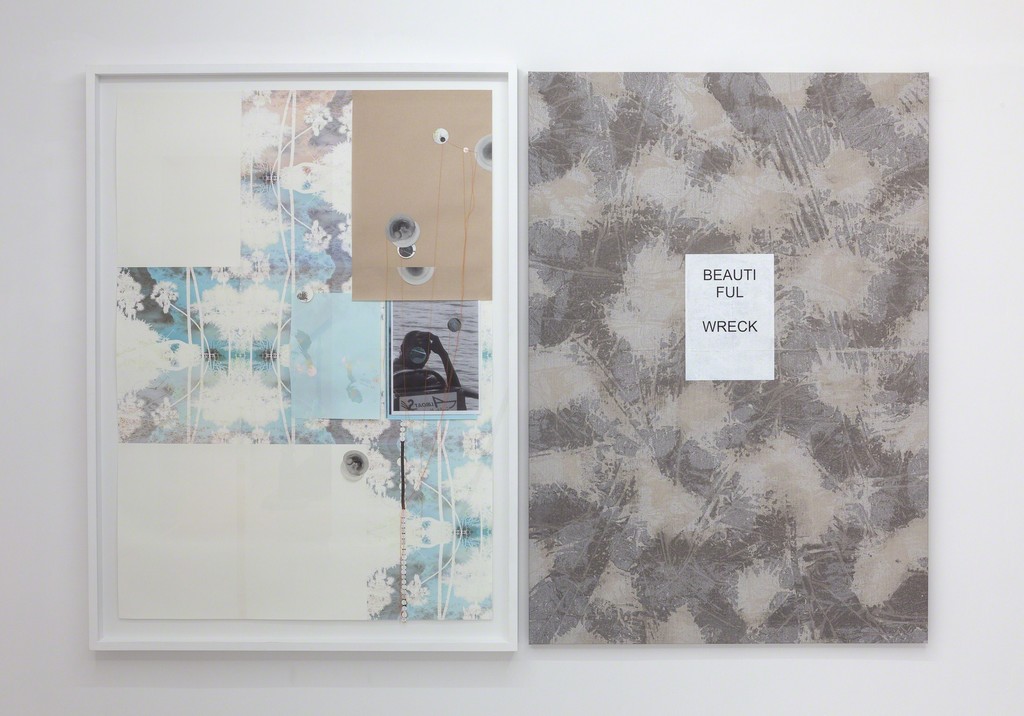 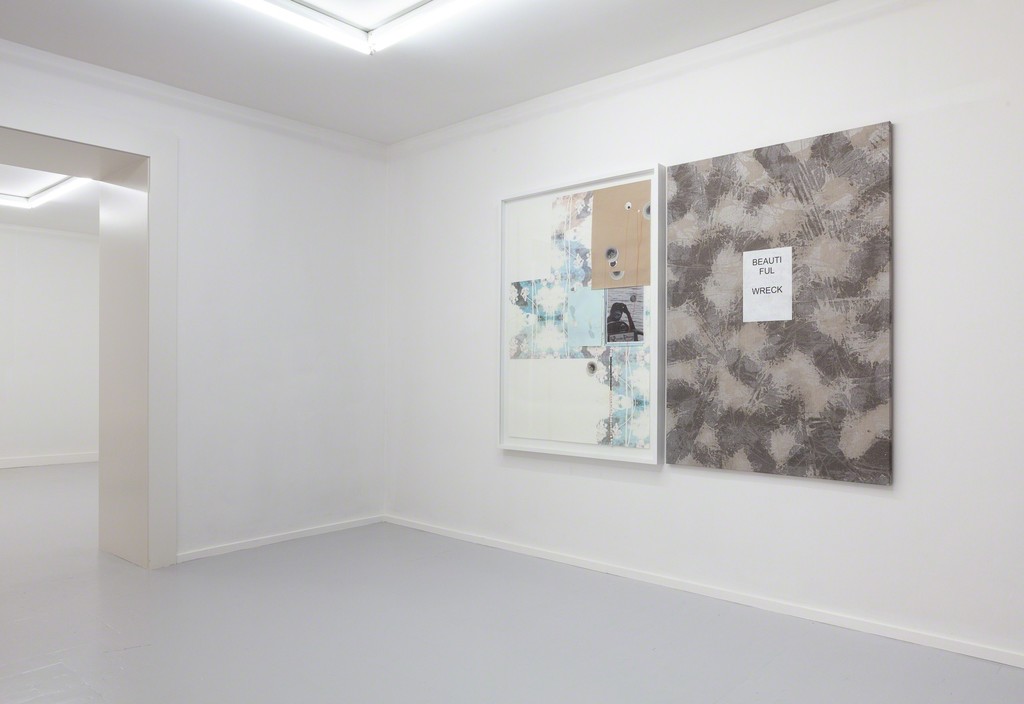 This is not only the first occasion the artists have had to exhibit together, but also the first time they are each showing in Brussels. Both using photographic, text-based, and abstract materials, Blytt and Stewen are keen observers of the world around them, presenting their findings to the viewer without judgement, preferring to create an opening to the world outside of the gallery. These two artists bring our attention to certain aspects of humanity, such as desires, flaws or quirks. Working primarily with paper, in the case of Dirk Stewen, or with painted canvas, in the case of Are Blytt, neither artist limits himself to traditional methods, addressing their support with a mixed media approach which creates delicate and poetic relationships and tensions between the various elements.
This exhibition was born from Blytt’s recent residency at WIELS in 2018. Intrigued by his studio practice and also by his recent curatorial ventures, the gallery invited Blytt to show at the gallery alongside an artist of his choosing. While the two artists had never met, their similar preoccupations create a coherence between the two bodies of work, while remaining each distinct and unique. Alongside Blytt’s newest series of works, which is considerably darker in palette than his past works and is strongly inspired by his time in Brussels, Stewen is showing two works from his newest series, as well as two works from his archives.
With a background in analog photography, Stewen explores every aspect of the medium, including the paper, the various ways of manipulating an image and the possible destinations and significations the photograph may have. After a series of works in which Stewen exposed photographic paper to the light, thus rendering it useless and covering the sheets entirely with black ink, the artist’s newest series of pieces incorporates ink in a new manner. Employing a similar technique as with his watercolours, the artist uses swaths of ink mixed with water to create guided aleatory patterns, who’s pillowy or even crystal-like textures serve as a backdrop for a collage of images. These images, all taken by the artist himself, are layered, converted to negative, and cut out, creating a dialogue between the background and the foreground. This procedure is also adopted for the 2012 work Untitled, in which an image, confetti, and circular forms created with watercolour are superposed to create an impression which is at the same time rococo, psychedelic, and nostalgic. Another form of nostalgia is also employed in the work The Road, for which Stewen uses the paper and text from an original artbook published by Skira, which references a work by Pissarro. However, in lieu of the original image, Stewen has placed his own photography, creating an attention to both the style of the language and the ambiguity of what it can convey.
Stewen’s strong background in photography is doubtlessly one of the reasons why his work appeals to Blytt, who is increasingly interested in the incorporation of the photographic image in abstract painting. Having juxtaposed painted canvases with phrases, images and objects for the large part of his career, Blytt has begun systematically integrating his own photographs. These photographs, as well as the texts, attest to our present-day climate, both political and philosophical, touching on issues such as finance, the environment, self-image and the more complex or unmentioned aspects of life. Often leaving his works unstretched, his canvases billow into the space of the spectator, while others conform to the traditional painterly vocabulary of a clean, rectangular form. Images such as a prehistoric sculpture of Venus or hands filled with roses are screen-printed to the background, while texts such as Sensitive Health and Beautiful Wreck are carefully painted and printed onto the abstract layers underneath, giving the impression of an A4 paper which has been simply stuck to the canvas. This co-existence of abstraction and conceptualism anchor painterly issues in our present day; the words or photographs are presented to us by the artist, permitting us to reflect upon the age we live in and how we personally feel about the given situation.
Are Blytt (1981, Bergen, Norway) lives and works in Oslo. His solo exhibitions include: Eight Paintings, Galleri K, Oslo, Norway (2017) ; Red Sun Rising, Kunsthalle CCA Andratx, Mallorca, Spain (2015) ; Are Blytt, Trafo Kunsthalle, Asker, Norway (2014) and ABSTRAKTIONEN DES BUCHERREGALS, Noplace, Oslo, Norway (2013). His group exhibitions include : når himmelen klarner, Kunsthalle CCA Andratx, Mallorca, Spain (2018) ; Truckene Suser Frem og Tilbake, Vestfossen Kunstlaboratorium, Vestfossen, Norway (2018) ; Neolithic Graffiti, QB Gallery, Oslo, Norway (2015) ; Performa 13 w/ Entrée, New York City, USA (2014); Limits of My Language, Platform Stockholm, Stockholm, Sweden (2013); The National Annual Autumn Exhibition, Kunstnernes Hus, Oslo, Norway (2012) ; Norwegian Drawing Biennale 2012, Oslo, Norway (2012) and KOBE Biennale 2011, Kobe, Japan (2011).
Dirk Stewen (1972, Dortmund, Germany) lives and works in Hamburg. His solo exhibitions include: Transition, Tanya Bonakdar Gallery, New York City, USA (2018) ; Dirk Stewen – Negative, Galerie Karin Guenther, Hamburg, Germany (2017) ; Dirk Stewen: Glückliche Stunde, Gerhardsen Gerner, Oslo, Norway (2016) ; Dirk Stewen, The Locker Plant, Chinati Foundation, Marfa/Texas, USA (2013) and The Exhibition Formerly Known as Passengers 2.3: Dirk Stewen, CCA Wattis Institute for Contemporary Arts, San Francisco, USA (2008). His group exhibitions include: Germany is Not an Island, Bundeskunsthalle, Bonn, Germany (2018) ; Tjorg Douglas Beer / Ulla von Brandenburg / Dirk Stewen, Produzentengalerie Hambourg, Hamburg, Germany (2017) ; The Day Will Come When Photography Revises, Triennale of Photography, Hamburg, Kunstverein in Hamburg, Germany (2015); Boesner Art Award 2014, Märkisches Museum, Witten, Germany (2014); Collection Tedeschi, Parisian Laundry, Montreal, Canada (2012) ; The Anxiety of Photography, Aspen Art Museum, Aspen, USA (2011); Art on Paper 2010: The 41st Exhibition, curated by Xandra Eden, Weatherspoon Art Museum of Greensboro, North Caroline, USA (2010) and privat – Wuppertaler Sammler der Gegenwart, Von der Heydt Museum, Wuppertal, Germany (2009).