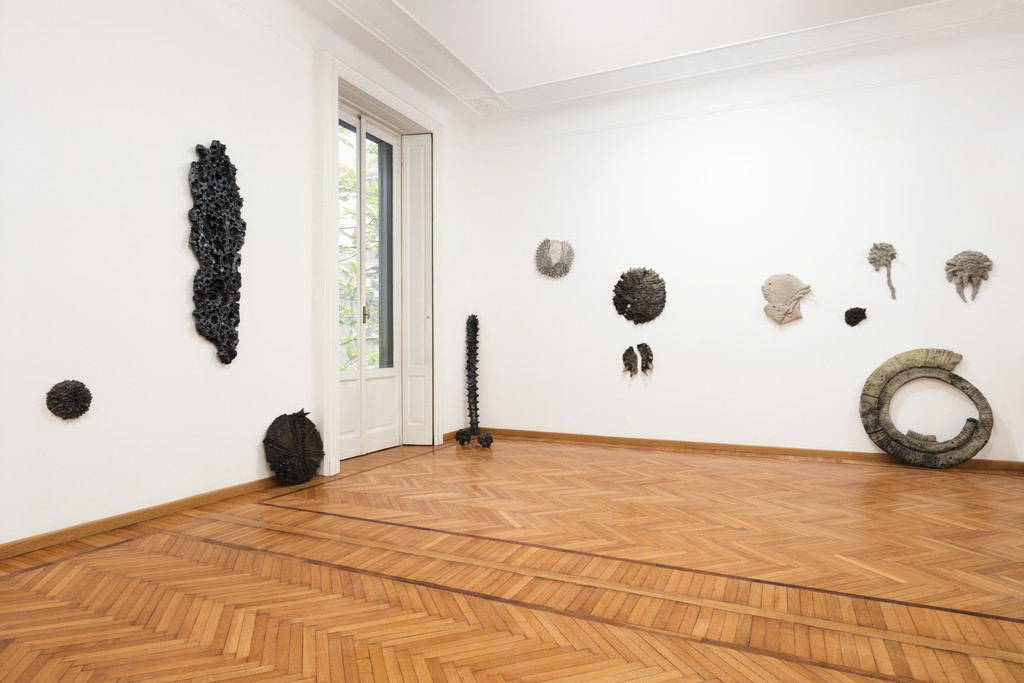 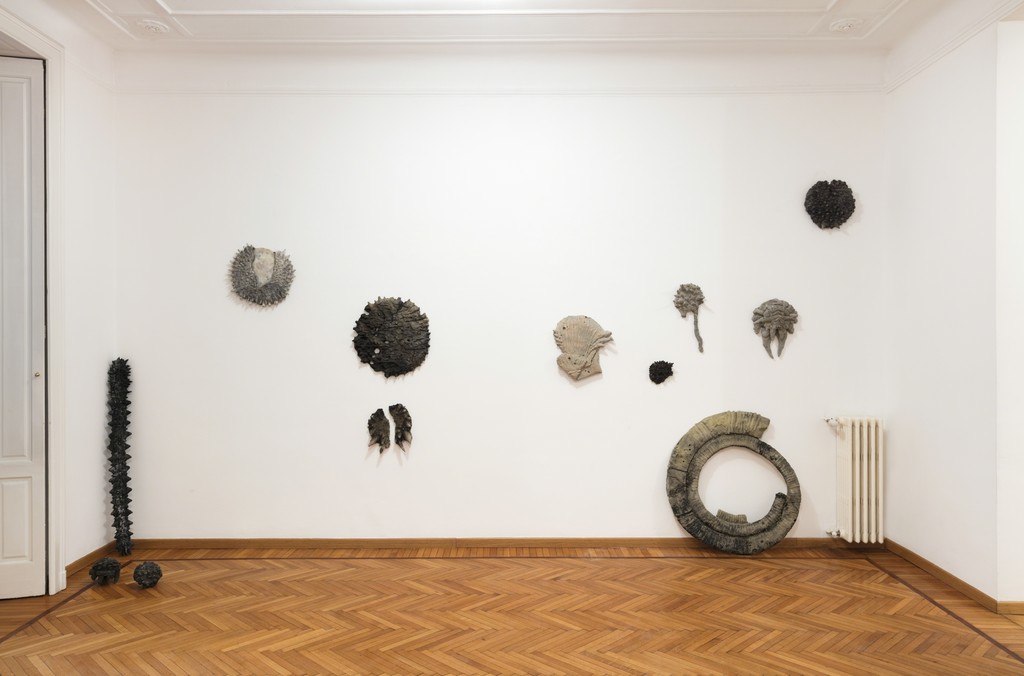 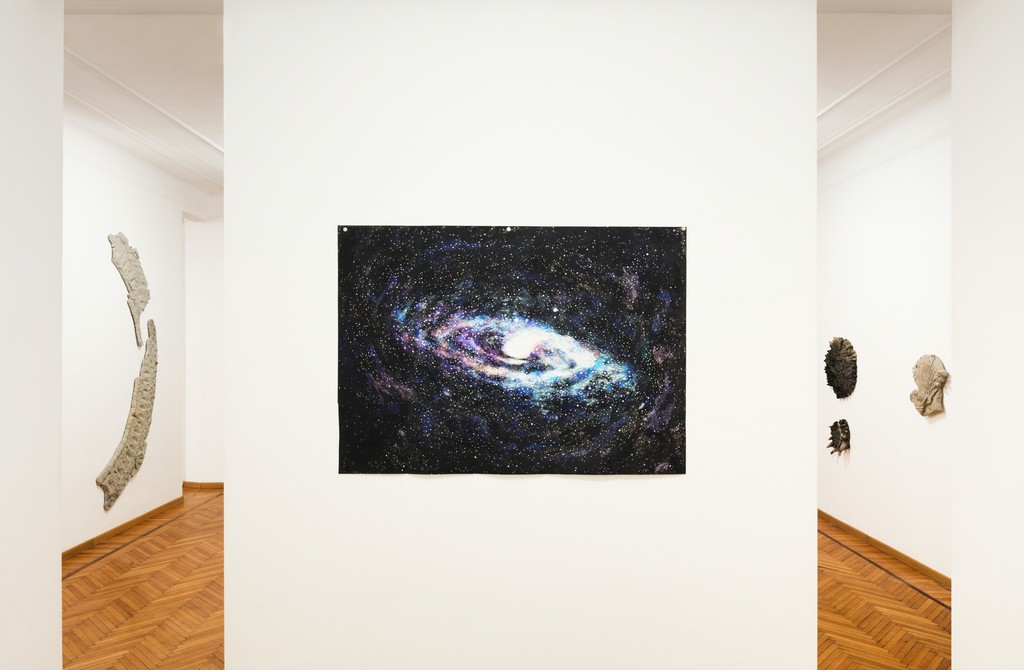 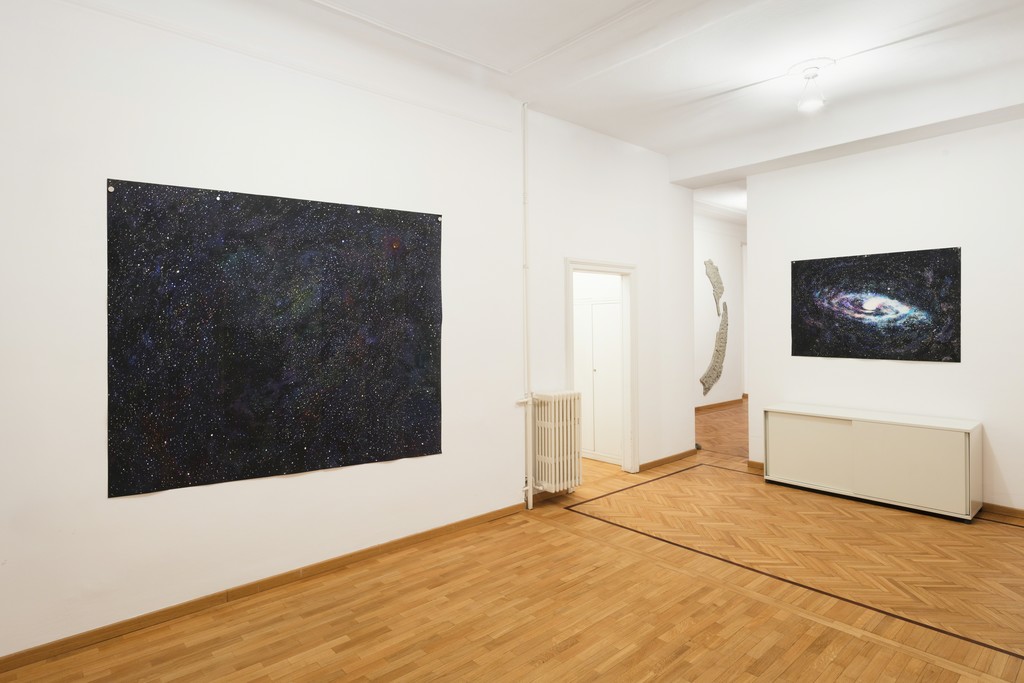 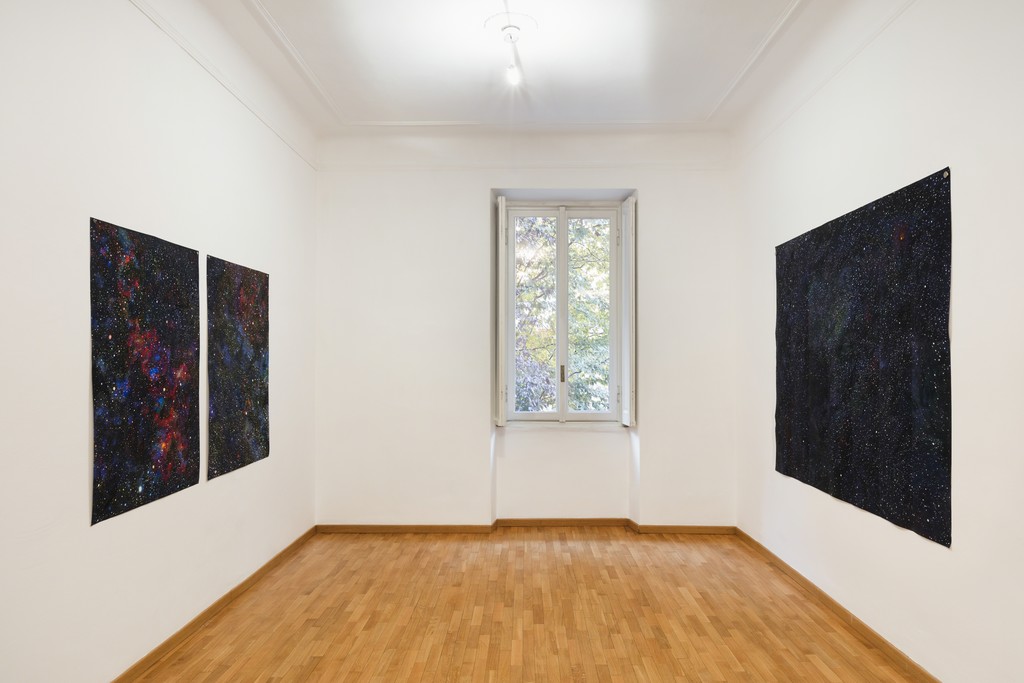 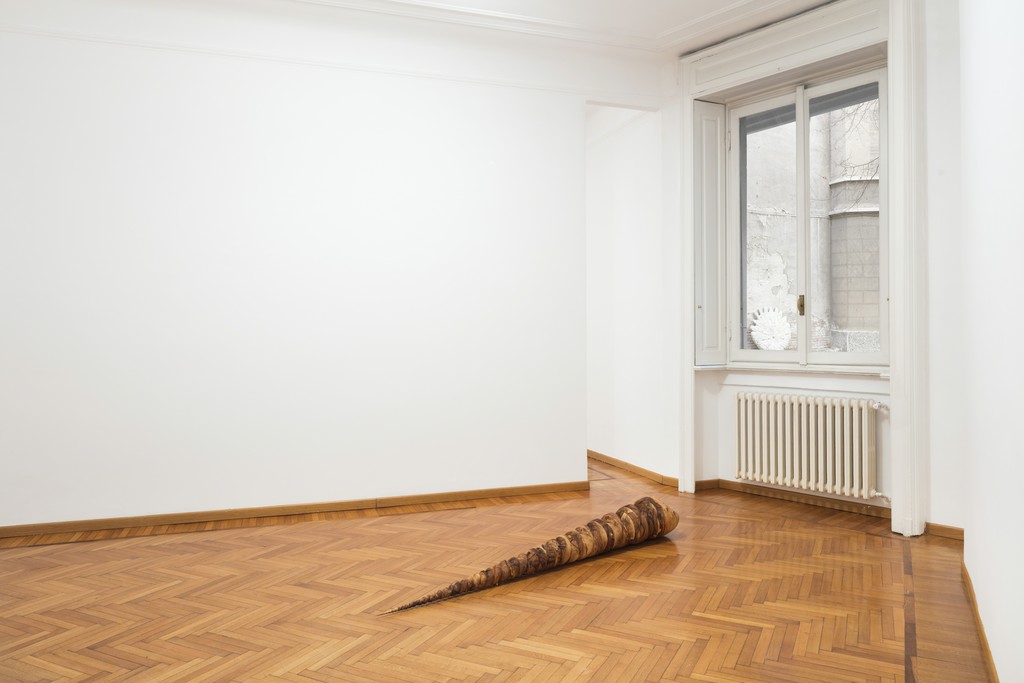 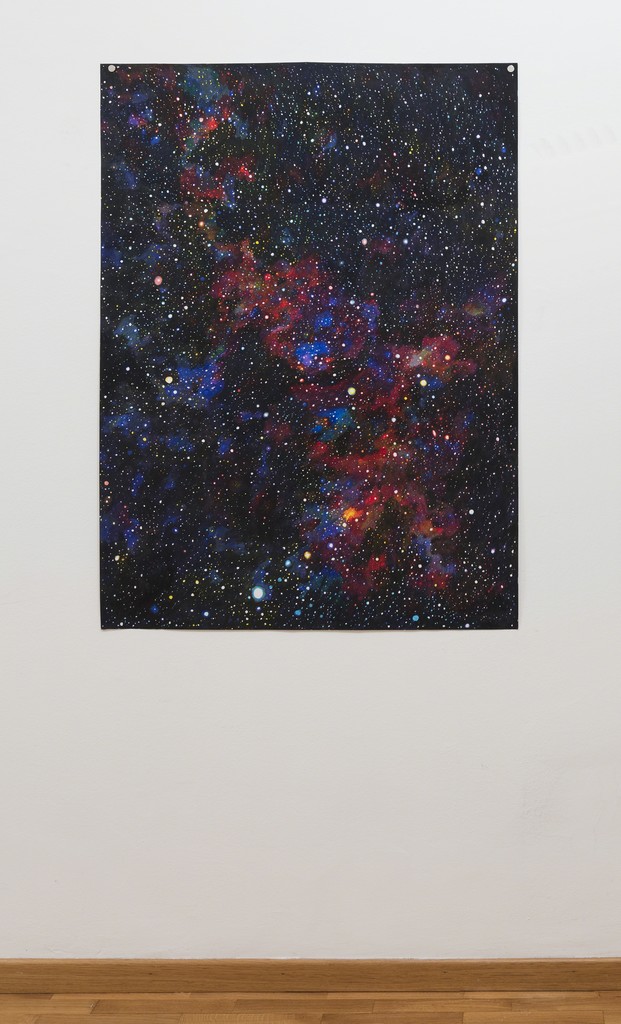 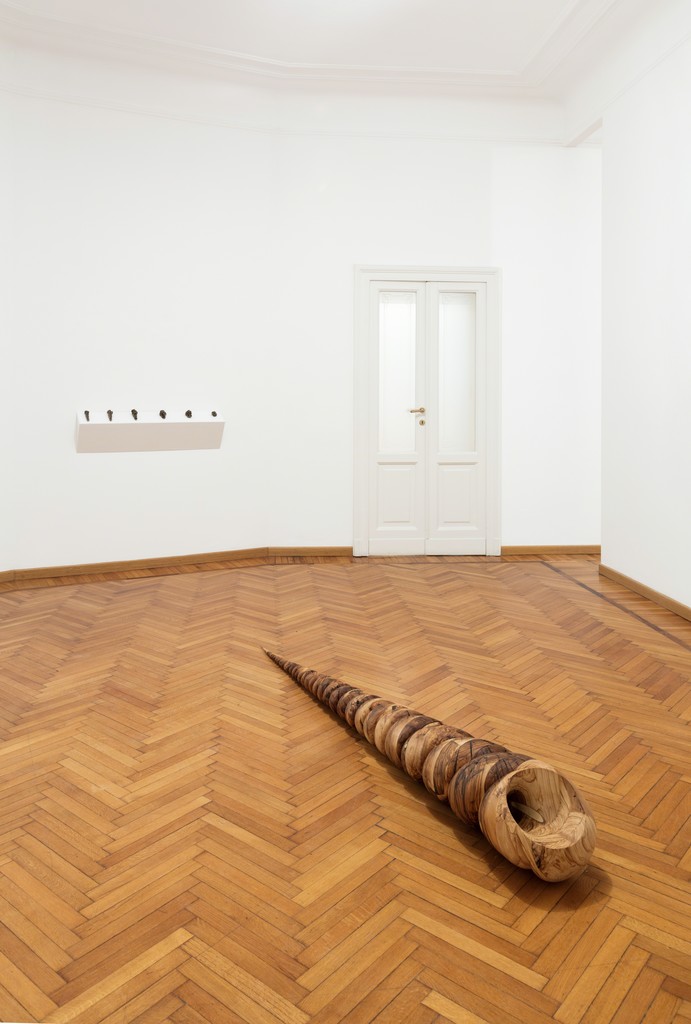 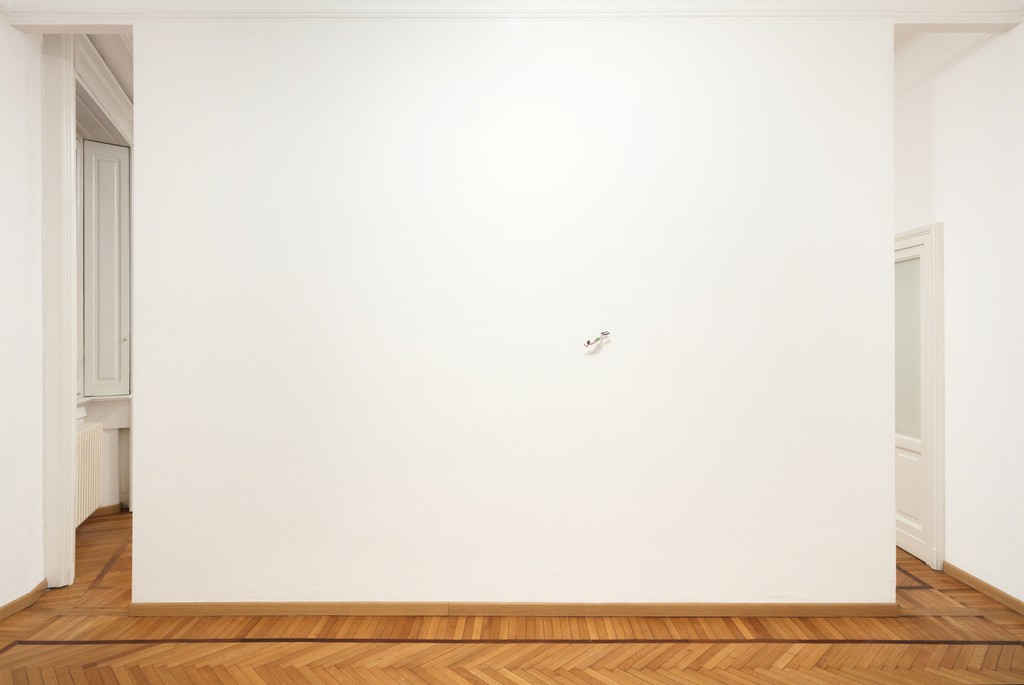 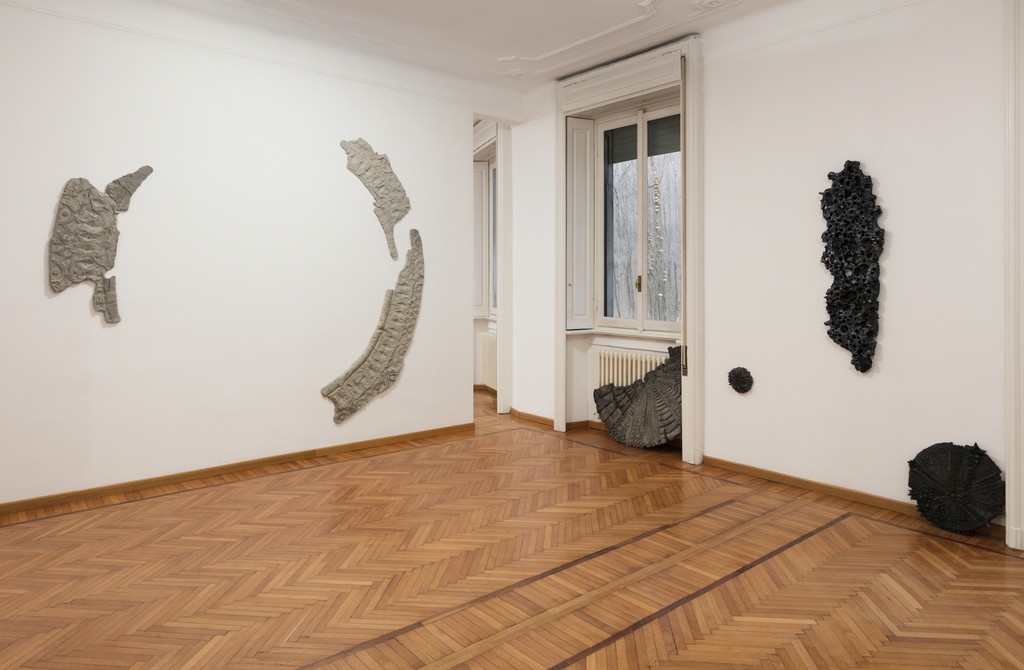 The exhibition backtracks through a narrative that lasts just a few moments, like a flash in the head of a young boy. All this happens in the cosmos, while the universe expands, galaxies float in a spiral, and white dwarfs collapse. Creatures that seem to come from another planet are transformed into fossils, while a gate made for crossing the universe falls into ruins. On a shelf we find fingers progressively devoured by a fungus, like frames in a time-lapse film. Moving forward in space, but backwards through the narrative, we encounter a large seashell made of olive wood, resting on the floor. It is the archetype of a seashell, its forms are geometric and pointed, simplified and accentuated: it is the perfect seashell. In the last room, we find the protagonist: a boy swimming under water, observing a seashell.

The route in the gallery begins with four large drawings of Galaxies that engage with the space and expand its boundaries, creating a timeless place. The second room features Stargate, a sculpture of a portal, which was once used to reach any time or place at the speed of light, but now lies in ruin. The fossils, alien and earthly, are arranged in a strangely catalogued order, hung on the wall like war trophies. The bronze sculpture Like Ophiocordyceps unilateralis shows a fungus that attacks matter and transforms it completely. The wooden seashell is the center of the exhibition: an element that activates the imagination and is the link between us and the cosmos. It contains the information required to decode an era, an atmosphere and a planet. Its shape shows us the fractal growth of matter, as it appears everywhere in nature. Finally, Underwater is a minute sculpture in resin and wood of a boy underwater observing a seashell. His imagination is sparked in an instant, grows until it takes shape in his mind, and lasts only the time he can hold his breath. Then it vanishes and he returns to the surface, only a little bit older than before.

Tosi’s research focuses on the infinite possibilities of matter and its transformation, using a refined and ferocious language aimed at investigating the most complex and dramatic aspects of existence. The artist hungrily probes into every dark cranny, creating fascinating and sometimes dangerous images.

Federico Tosi was born in Milan in 1988 and graduated from the Brera Fine Arts Academy in 2014. His provocative, enigmatic works with unusual materials have caused a stir on more than one occasion: the carved cow bones on view at Almanac in Turin in 2017; the two cancer cells that tenderly hold hands, made in resin in 2014; the bird carcasses in multicolored resin (Rotten Bullshit, 2014-16); the jaws of a shark in marble (Make New Friends #3, 2012); and the bronze sculpture of a cat with barbed fur (Untitled, Cat).