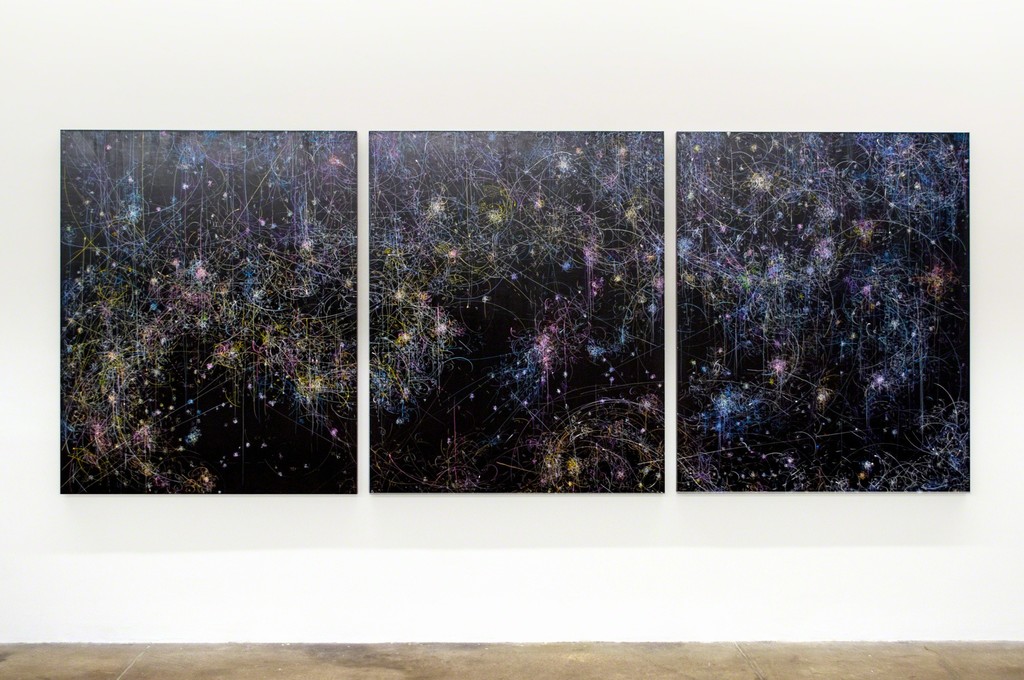 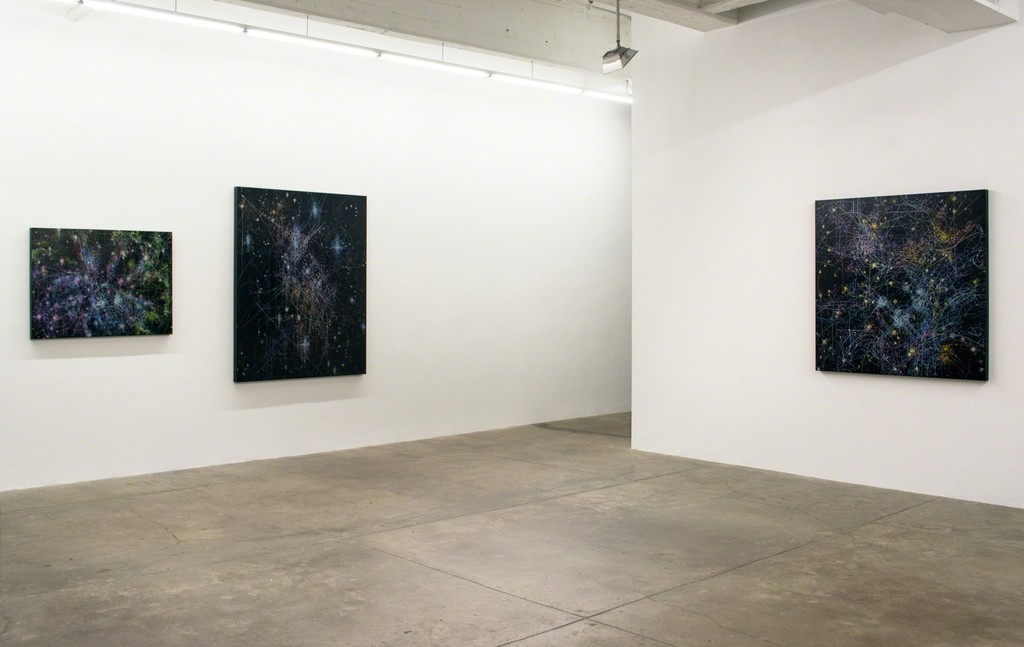 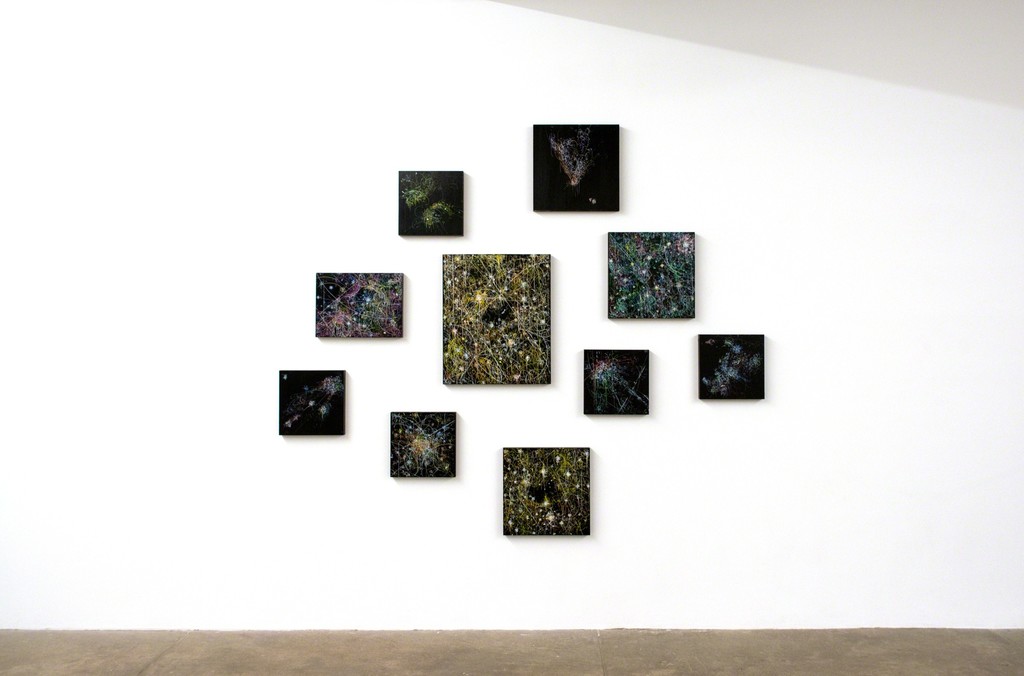 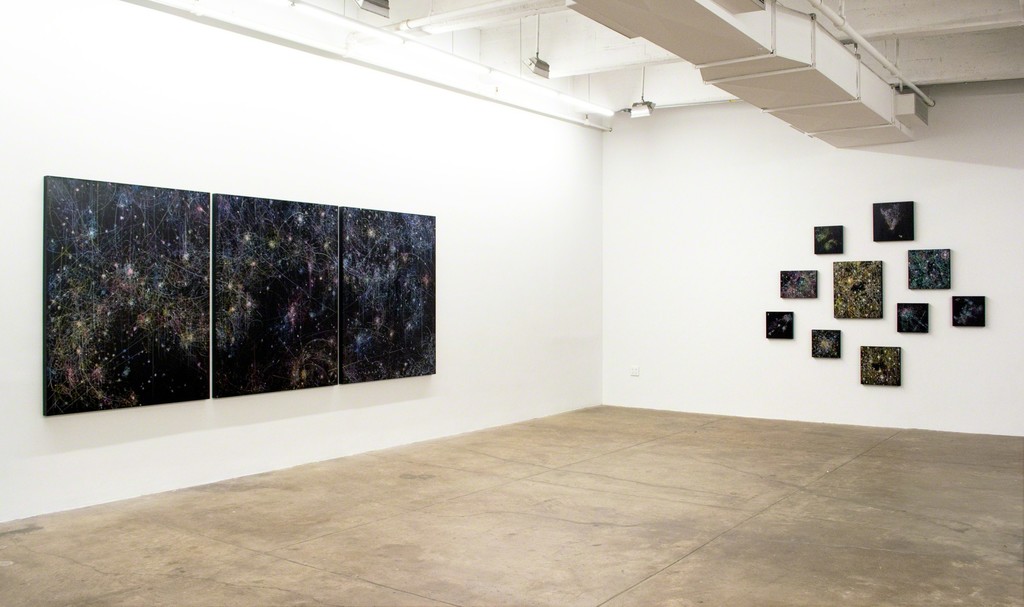 Johnson’s new body of work uses notated subatomic decay patterns to represent the birth, life, and death, or “long goodbye,” of celestial entities. The processes of the universe have long sparked Johnson’s interest; and in this series she draws inspiration from the formation of stars in nebulae and their eventual demise in supernova. These stellar nurseries are filled with particles where a disturbance in the balance between gravity and pressure can trigger a collapse and eventual transformation into a star. One day this star will become too heavy to hold itself and explode, starting the cycle again.

Johnson uses the “beautiful looping pathways” of particle decay to paint celestial happenings, from the Orion Nebula cluster, to young and proto stars, to dying stars in the Milky Way, finding a correlation between the cycle of birth, transformation, and collapse at the very smallest and largest boundaries of our physical reality. These images are built up from hundreds of ink marks that are fluidly rendered and organic in shape on a rich black background. Johnson is inspired by images gathered by the Hubble telescope and particle accelerators. Her work focuses on concepts that exist at the very edges of our cognitive capabilities, and yet through her practice she is able to make the unfathomable both relatable and tangible.

Kysa Johnson was born in Illinois in 1974, and trained at Glasgow School of Art in Scotland. Johnson has had solo exhibitions at institutions such as The Aldrich Museum of Contemporary Art (Ridgefield, CT), The National Academy of Sciences (Washington, DC), Roebling Hall Gallery (New York, NY), and The Nicolaysen Museum (Casper, WY). She has been featured in a number of group shows including exhibitions at The 2nd Biennial of the Canary Islands, the Tang Museum (Saratoga Springs, NY), The Katonah Museum of Art (Katonah, NY), the Hudson River Museum (Yonkers, NY), DeCordova Sculpture Park and Museum (Lincoln, MA), and Standpoint Gallery (London, UK). Johnson has created site-specific installations for KK Projects in New Orleans, LA (2008), Dublin Contemporary in Ireland (2011), and for the New York Armory Show, (2013). She is a 2003 NYFA fellow, 2009 Pollack Krasner Grant recipient, and lives and works in Los Angeles, CA.