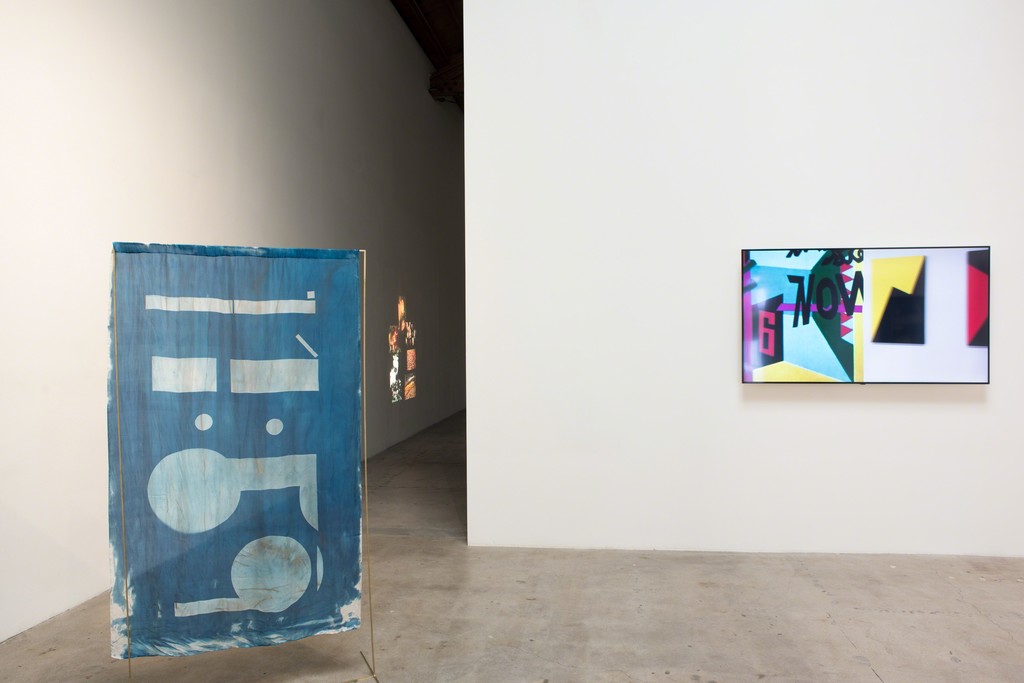 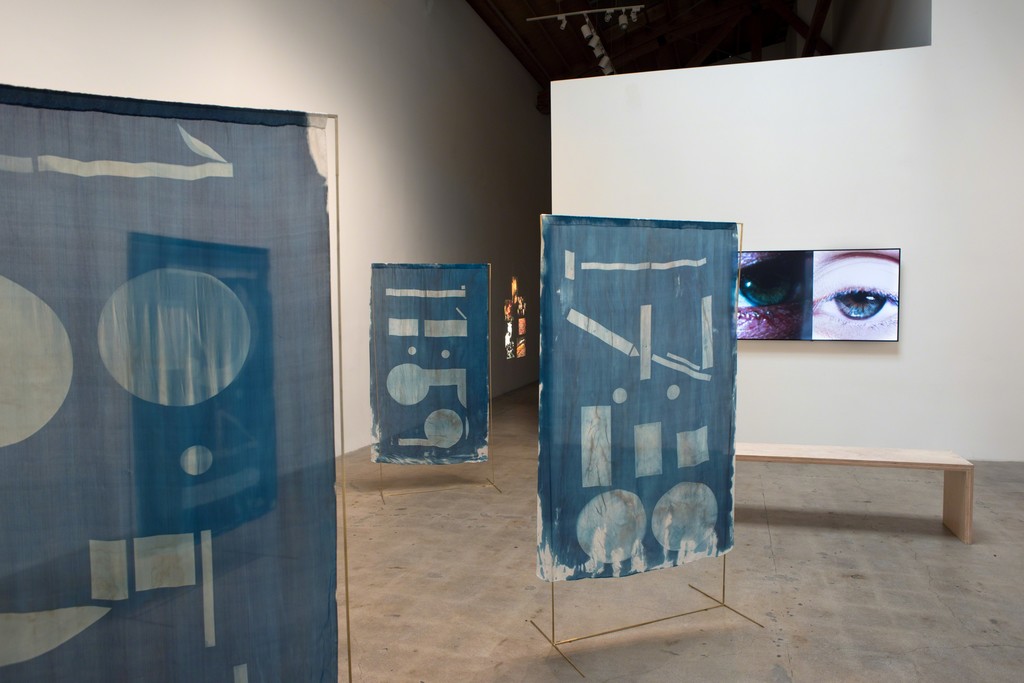 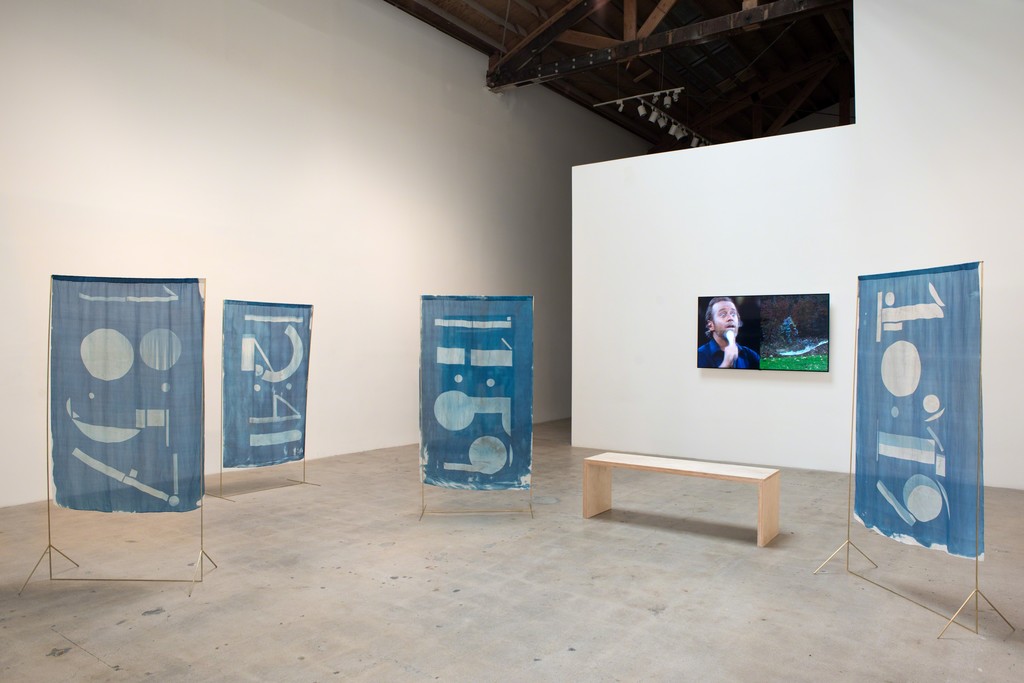 At one point in Robin Cameron’s Near Future Recent Past (2016) the video’s narrator states: “this is the news yesterday, this is the news today, this is the news tomorrow.” Images race by, as the new succumbs to its forward churning. Near Future Recent Past is a split-screen video juxtaposing clips of archival film with new footage, set to the cadence of a spoken script interspersing Cameron’s words with excerpts from writers including Richard Brautigan, Joe Brainard, and Rebecca Solnit. Certain symbols flash frequently across the screen: hourglasses, newspapers, sundials, a watch. A doubling occurs. Cameron offers “signs” of time using time as her medium, the fixity of the former undercut by the ephemerality of the latter as the seconds tick by. This video belongs, alongside a slide projection and suite of sculptures, to a cycle of works newly presented at Moskowitz Bayse that take time as their focus and, often, their medium.
It strikes me as something of a dilemma to focus on time, considering that the finer the measurement, or more precise the interval, the further one recedes from the experience that composes it. When the narrator of Near Future Recent Past repeats, “this is a second. this is a second. this is a second,” each second slips away in the time it takes to name it, making a mockery of imperatives to “live in the moment.” At another point, Cameron samples a bit by stand-up comic George Carlin: “there is no now,” he quips. True, but on the other hand, I wonder, nothing is ever not now, is it?
By mining this contradiction, Cameron’s work induces a subtle nostalgia stemming from the uncanny sense of being perpetually in the present but also just past it. (Another question: can one be nostalgic for the present?) In When is it? (2017) seven slide projectors arranged in a circle present found slides grouped thematically (animals, people, flowers), each tinged with that acid
sepia glow of 1970s snapshots that conjures nostalgia for a past you probably don’t even know, that you’re experiencing for the first time. An archival impulse takes on present tense: fragments of the past are cast out into space before again retreating, a potential mnemonic for memory itself. In another form of “casting,” a series of silk cyanotypes are emblazoned with an idiom of abstracted numbers that in fact read the length of their exposure (18:57, 10:19). Here, Cameron embeds the time of production into the work’s very fabric. She also confirms a nagging suspicion that our notation of time might be, in fact, purely formal.
Maybe the modern measurement of time is a decoy. Maybe it is a scaffold so tightly woven that it conceals its own emptiness. Not long after I agreed to write this text, I found myself atop a Mayan pyramid. In my excitement to climb up I hadn’t considered quite how steep it would be to get back down—hadn’t considered that vertigo would induce a minor panic, which I would try to parlay into a feigned meditative state. Stuck, I overheard a fact cited off a nearby iPhone: the smallest interval of time the Maya measured was a day. Maybe that suited their needs. I thought about how Cameron proposes something similar in Near Future Recent Past: “segments of time,” the narrator offers, “could be measured in the way he looks at you across the room, how many steps it takes to get up to your apartment.”
This proposal to measure time differently has echoes in art history. I think, for instance, of how Alberto Giacometti created The Palace at 4 a.m in 1932—a sculpture of thin wooden sticks that delicately frame out the titular “palace.” He wrote of it that, “It is related without any doubt to a period in my life...when for six whole months hour after hour was passed in the company of a woman who, concentrating all life in herself, magically transformed my every moment.” The sculpture is not a snapshot of one instance, but rather a new maquette for time: how six months could be accounted for, could be held. It is memory’s scaffold laid bare.