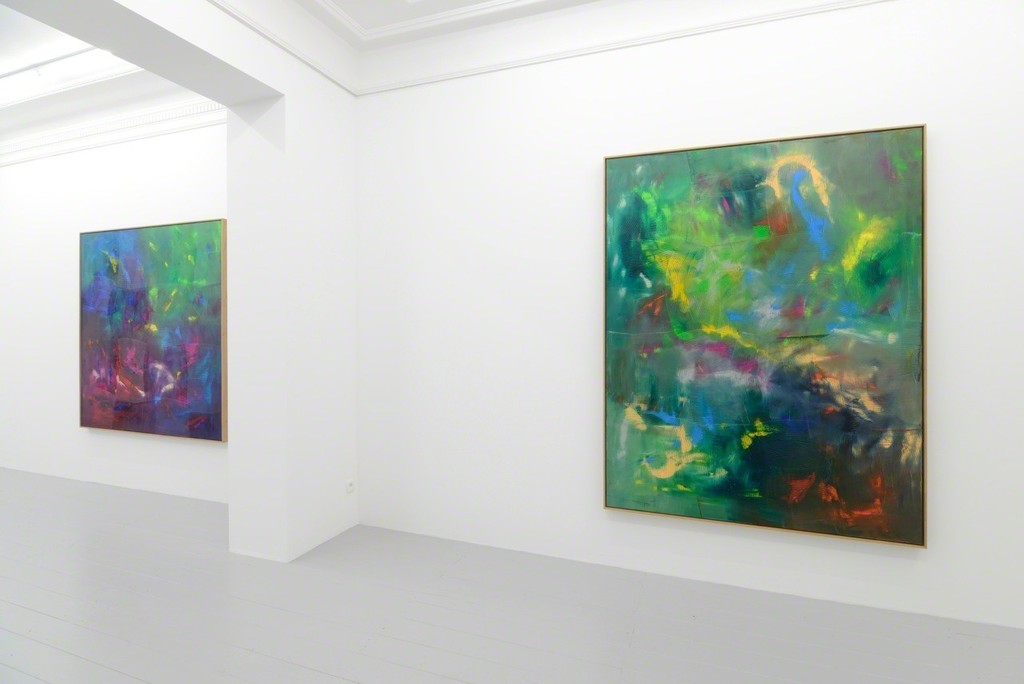 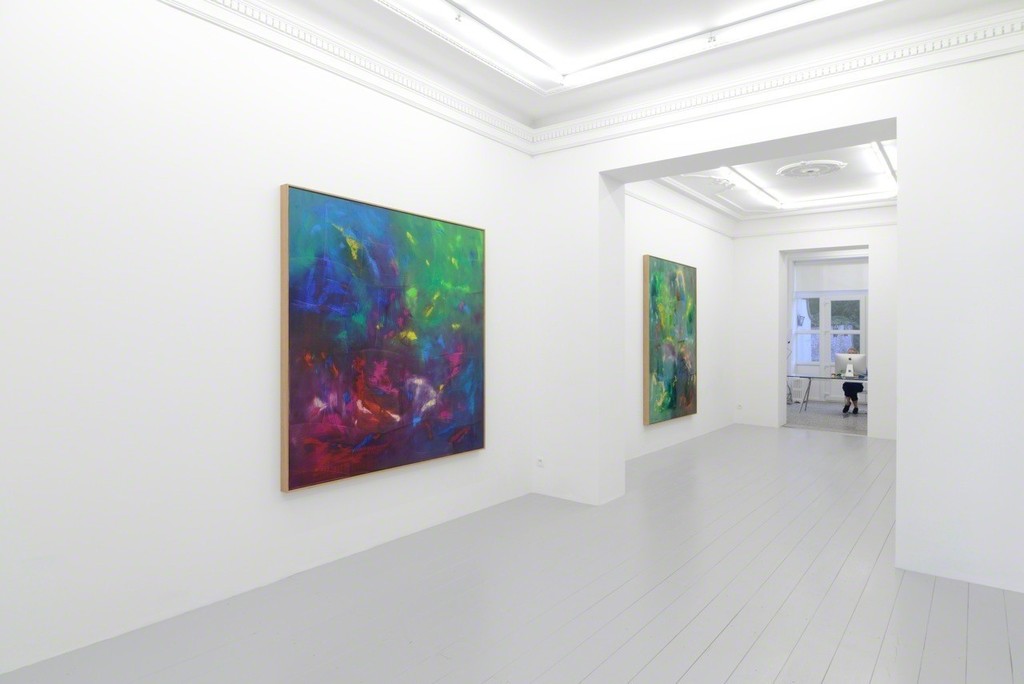 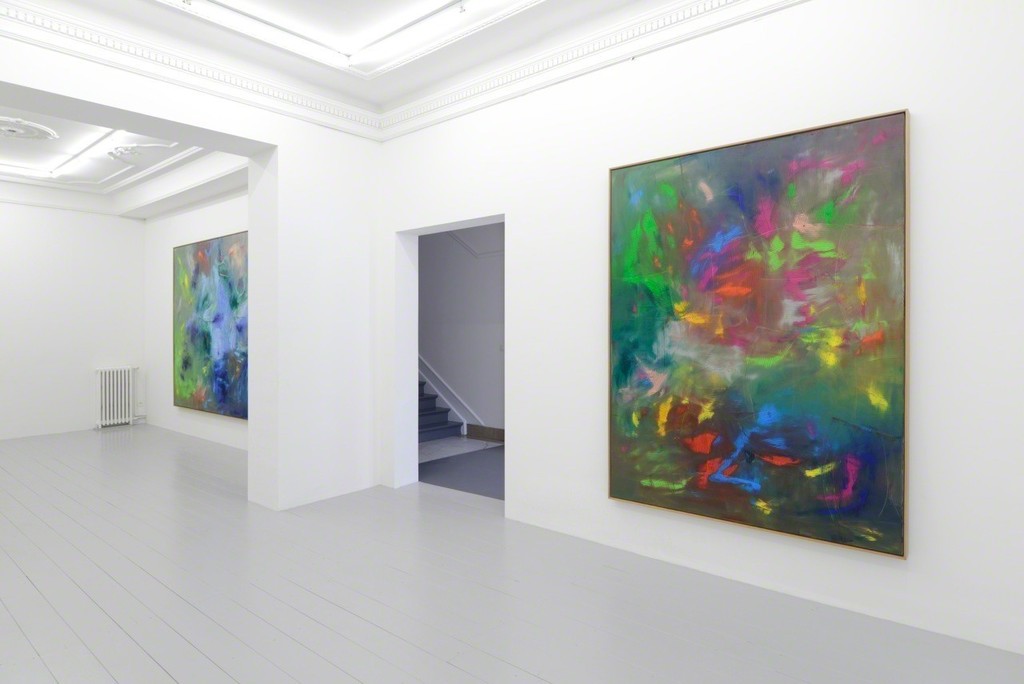 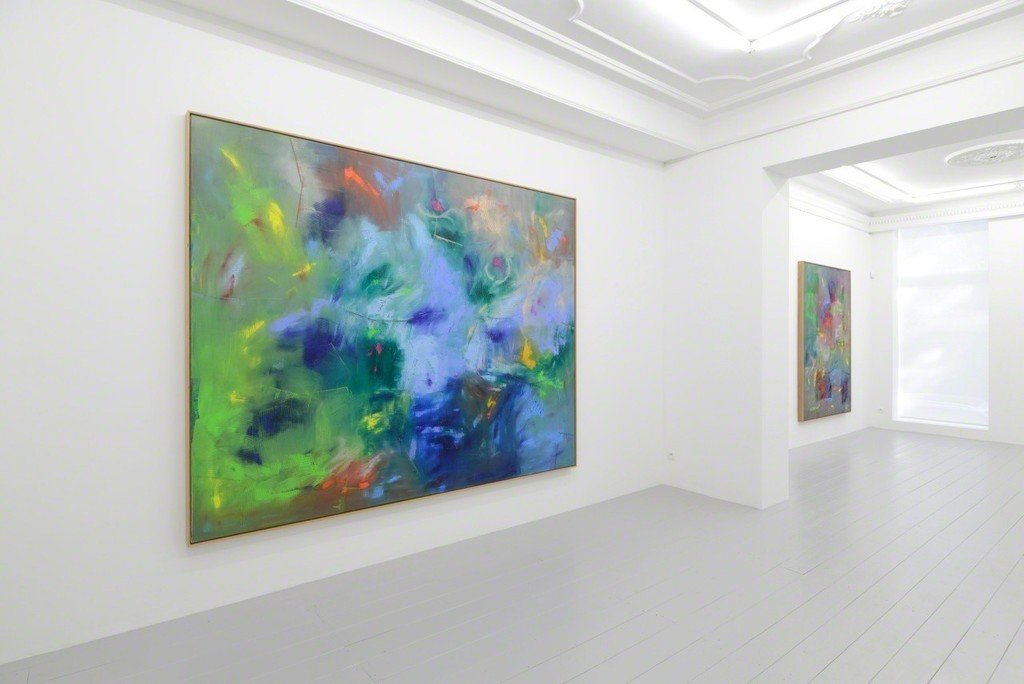 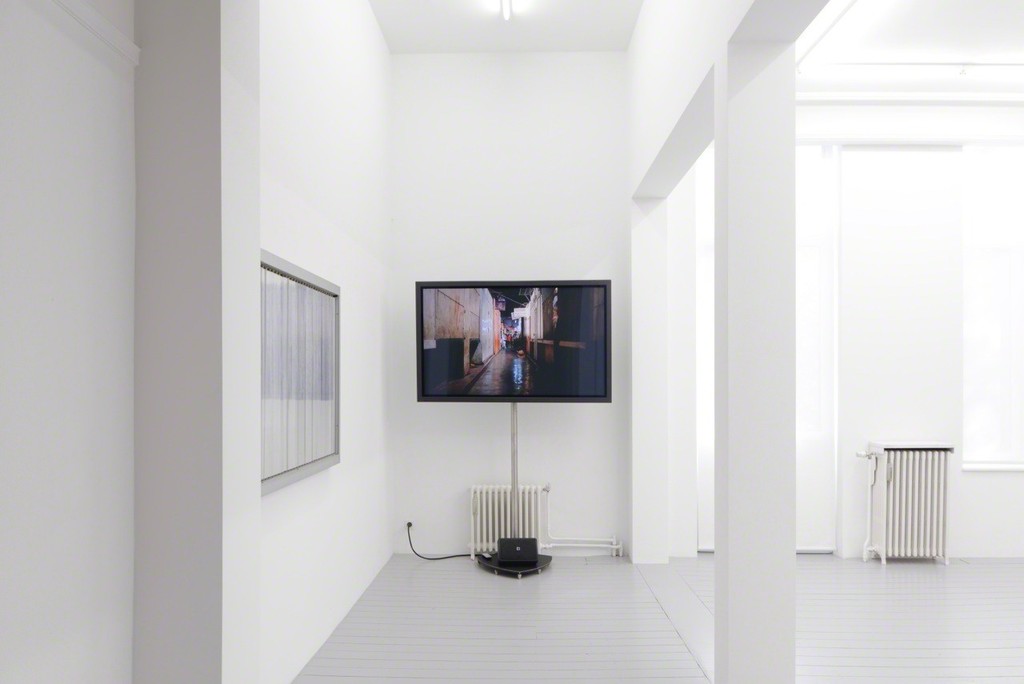 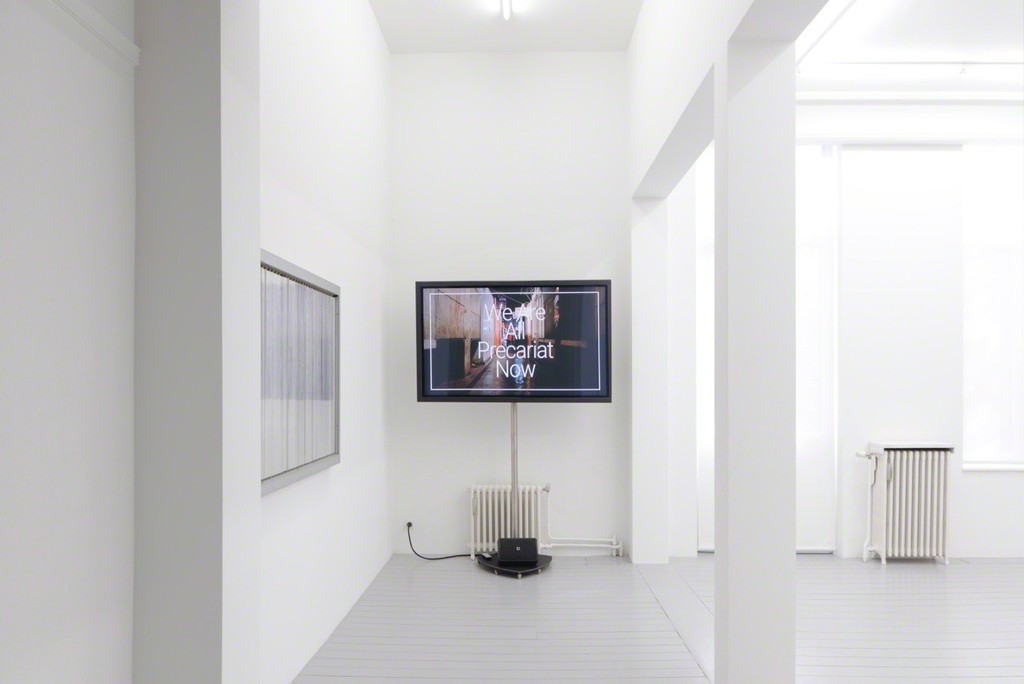 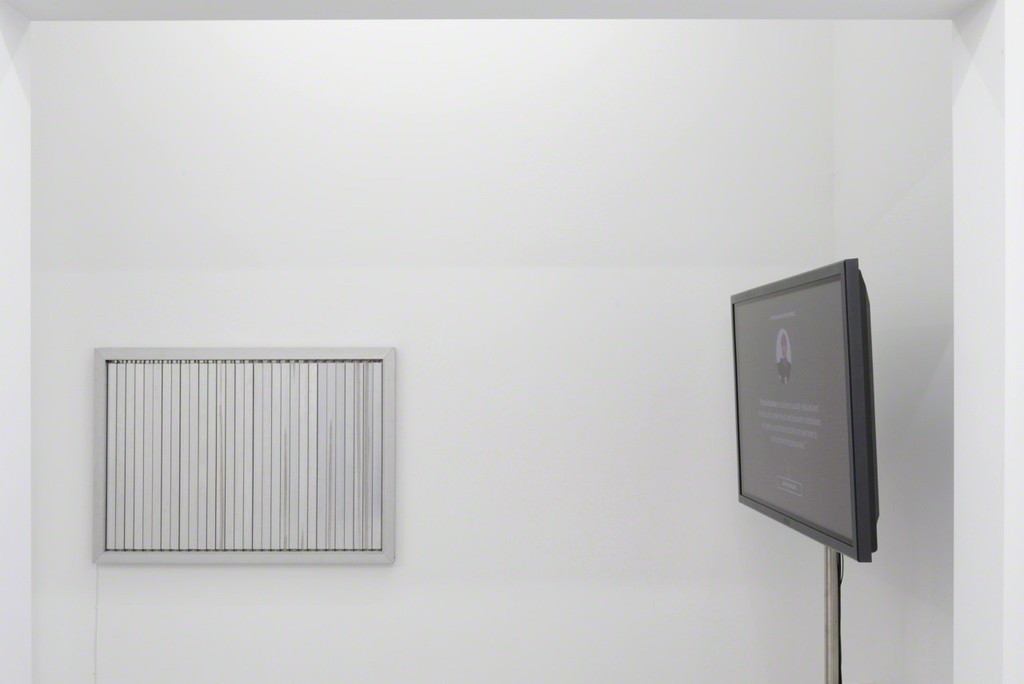 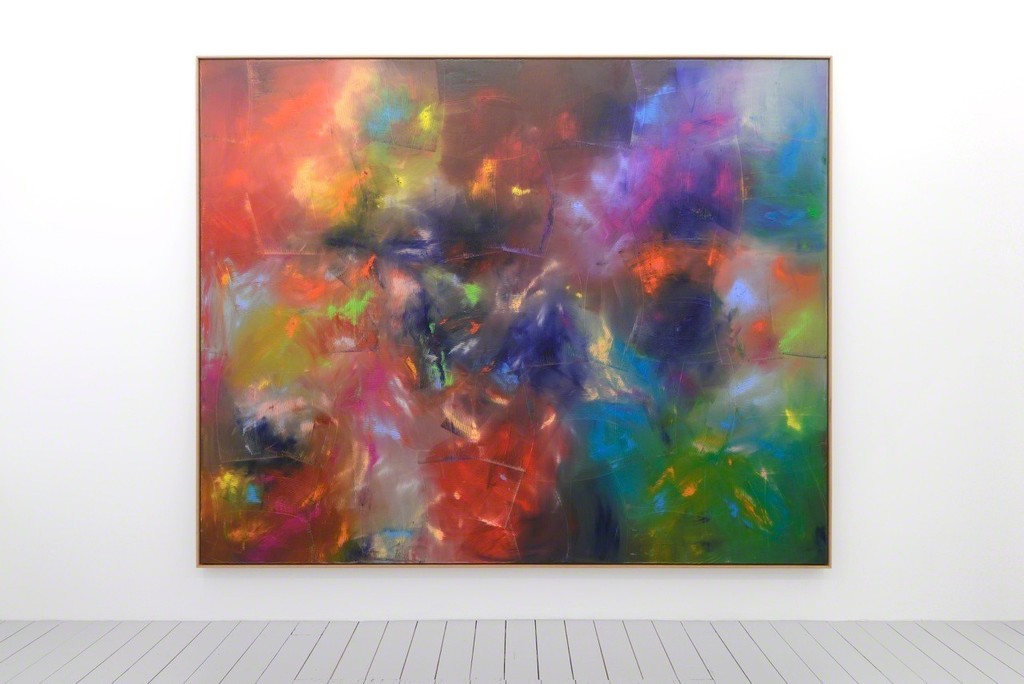 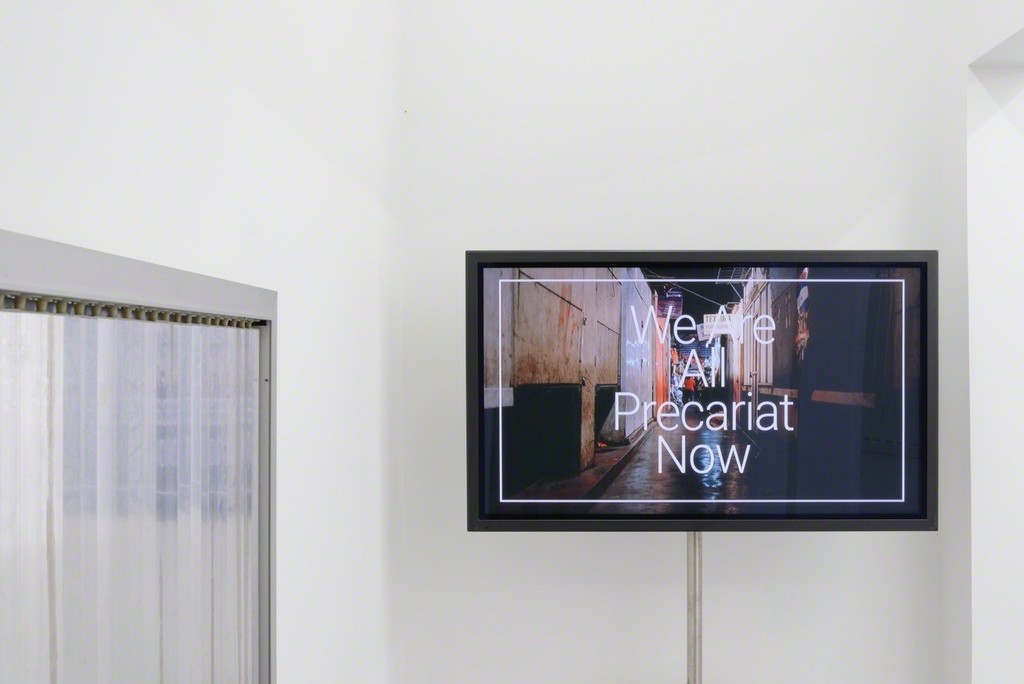 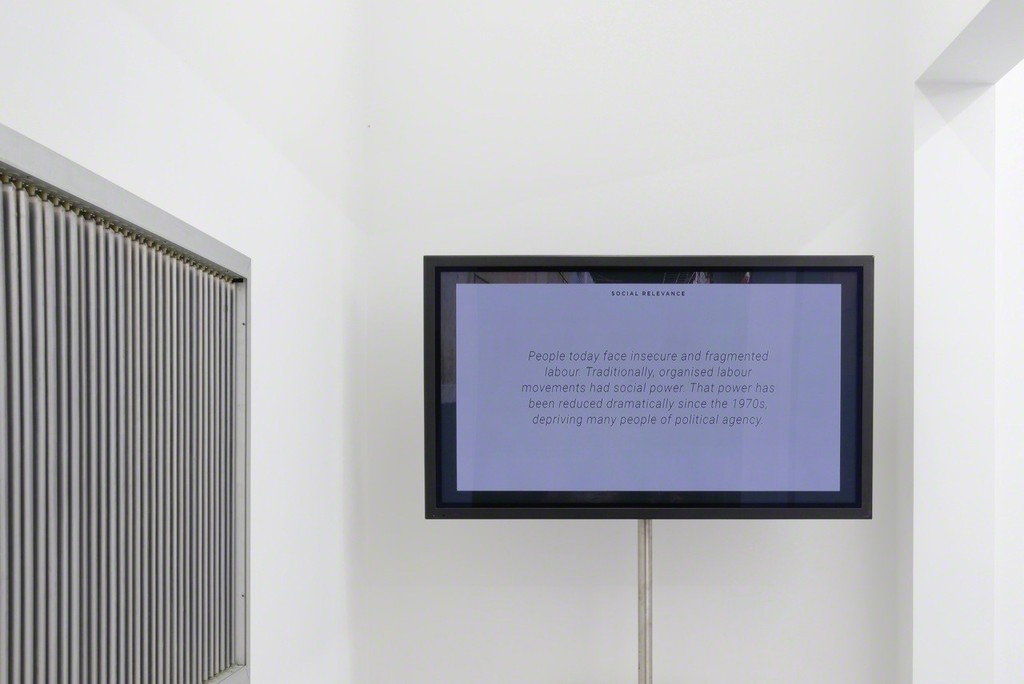 Rees engages with a tradition of conceptual art making, in which familiar tropes and genres – monochromes, abstracts, ready-mades – are quietly unhinged and recuperated as strategies for production. The exhibition’s central series of Artex Paintings revive a decorative ceiling pattern, popular in British working class homes during the 1970s. Creating this type of plasterwork, once a skilled manual job, has now been rendered all but redundant as the material fell out of fashion during the late 1980s. Rees’ methodology is driven through both a recognition of the steady disappearance of the working class over recent decades and the overwriting of much of its history, as much of the disappearance of Artex as a decorative mean itself. Within Rees’ paintings, distinctive shell-like patterns are combed through energetically colored fields. Incidental manifestations within the fluid oil register against the formal exercise of combing, which both obliterates and transforms the painted surface beneath.

Devoid of saturated images or commercial slogans, the impersonal forms of Rees’ Trivision Billboards appear throughout the exhibition. With their industrial and austere presence, they simulate or disguise themselves as minimalist sculptures. Placed variously on the walls and floors of the gallery spaces, their repetition suggests how they might be ordered in manifold sizes and formations. However, while minimalist objects traditionally asked to be considered as materials without reference to an outside reality, Rees undermines this logic by presenting a mechanism intended to broadcast information.

Similarly, the Artex Paintings could be understood as a deliberate subversion of abstract expressionism’s universal themes, in which gestural spontaneity has been rendered via the methodical repetitions of a builder’s tool. In Rees’ continued examination of reproduction and repetition, the work enters the format of a series, removing it from wry conceptual exercise.

While the abstract works of the Artex paintings and the minimalism of the billboards do not project the artist’s ideology directly, this is more clearly revealed in Rees’ video work Road Back To Relevance. Produced in collaboration with an advertising strategist and designer, the slide-show questions of how various modes of social engagement can remain relevant today by charting the course of a specific solidarity campaign, started in the 1980s between Wales and Nicaragua. While the visual tone of this work might suggest a need for such solidarity campaigns to modernize in order to reach a wider audience, the conclusion appears to be the opposite. Rather, the work points to the relevance of maintaining an inclusive and personal approach towards creating new connections between people, one that goes beyond issues of technology and dispersion.