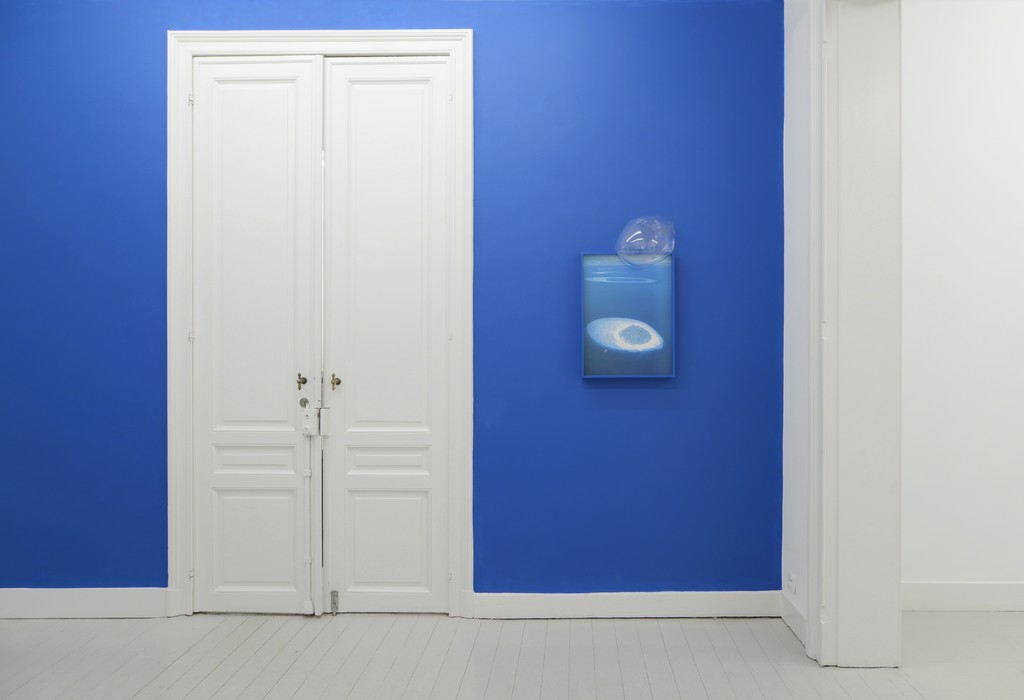 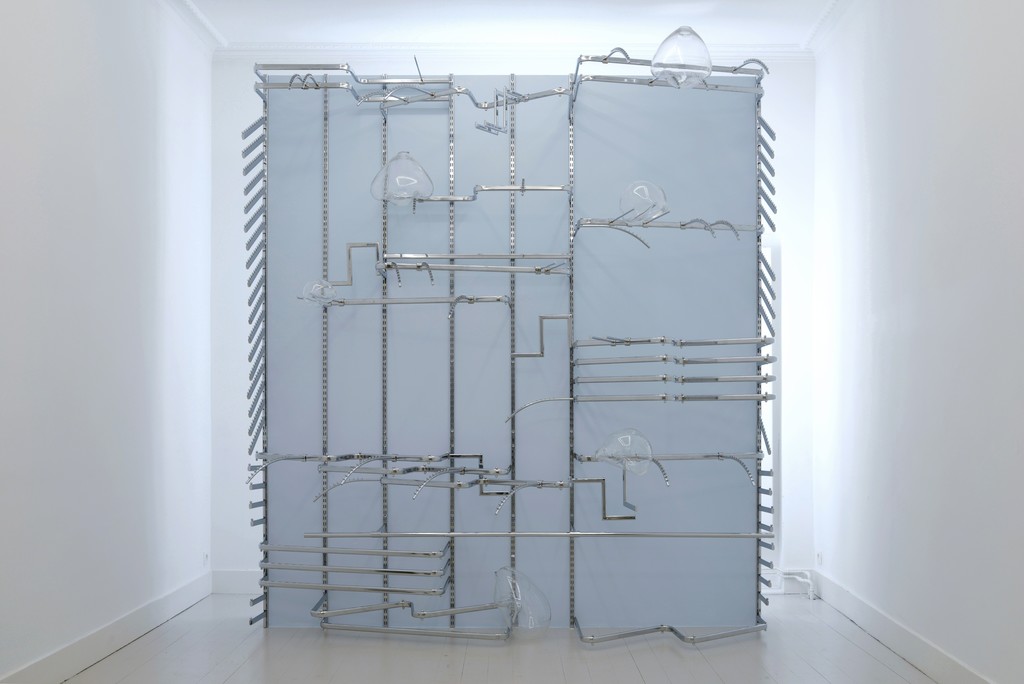 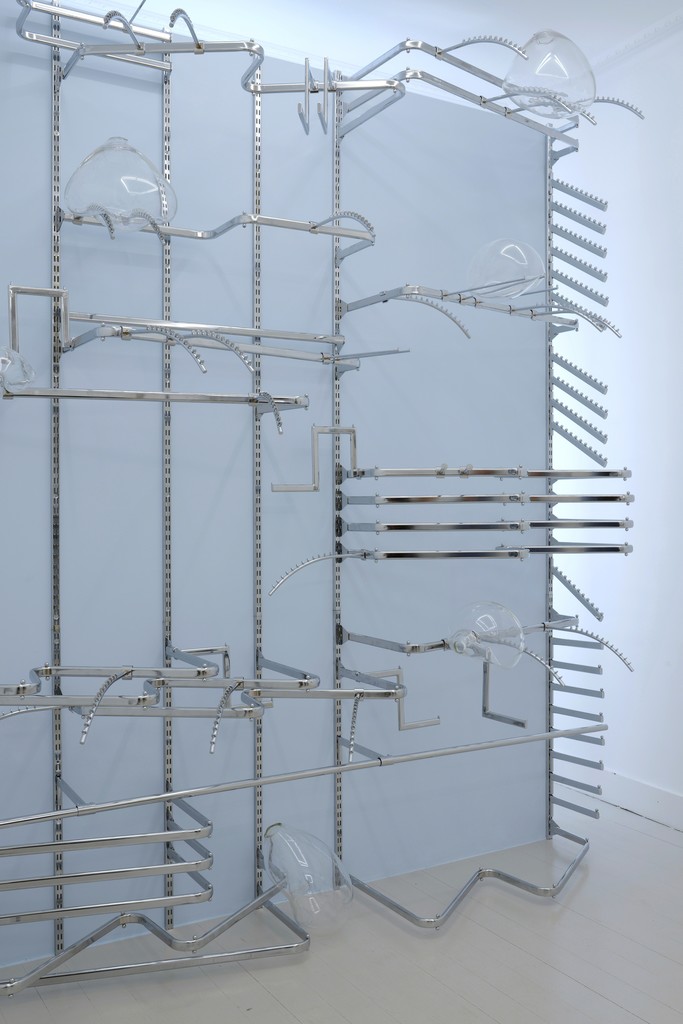 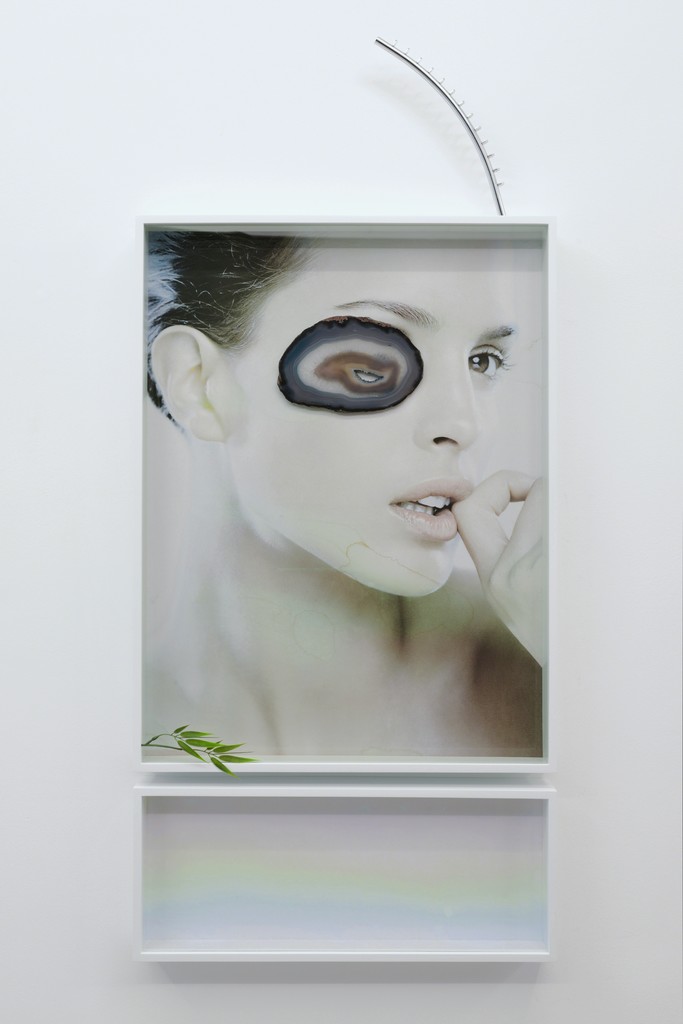 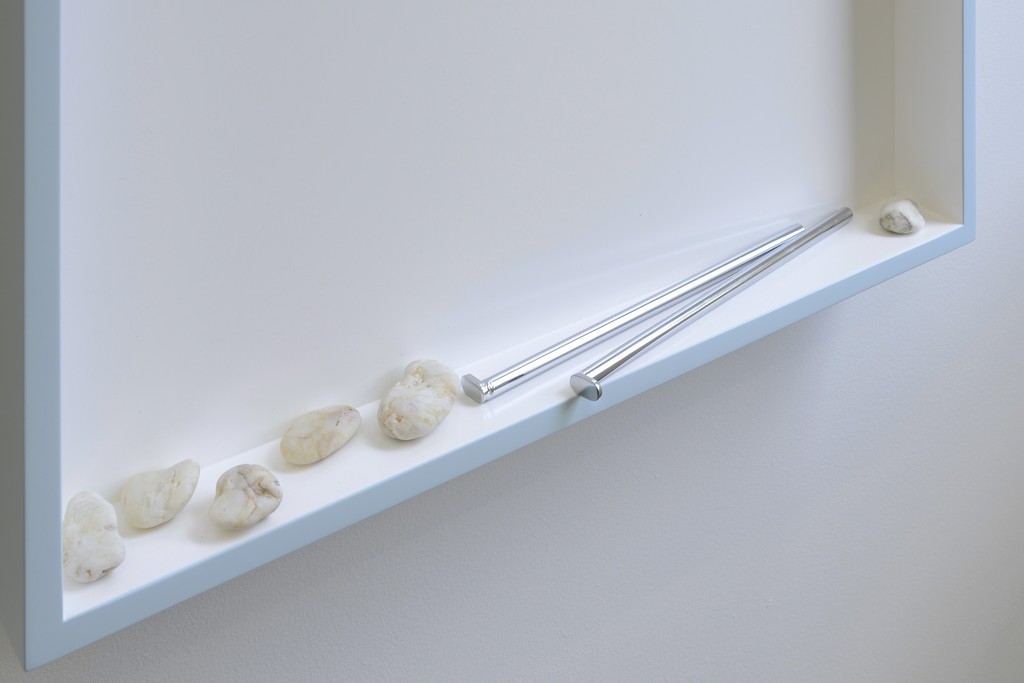 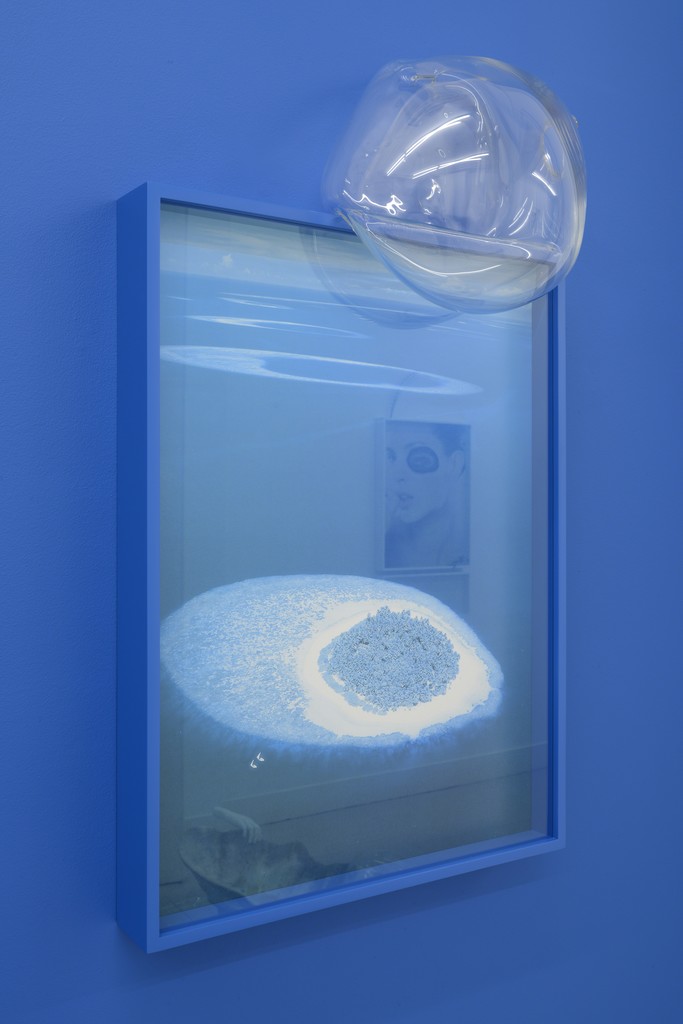 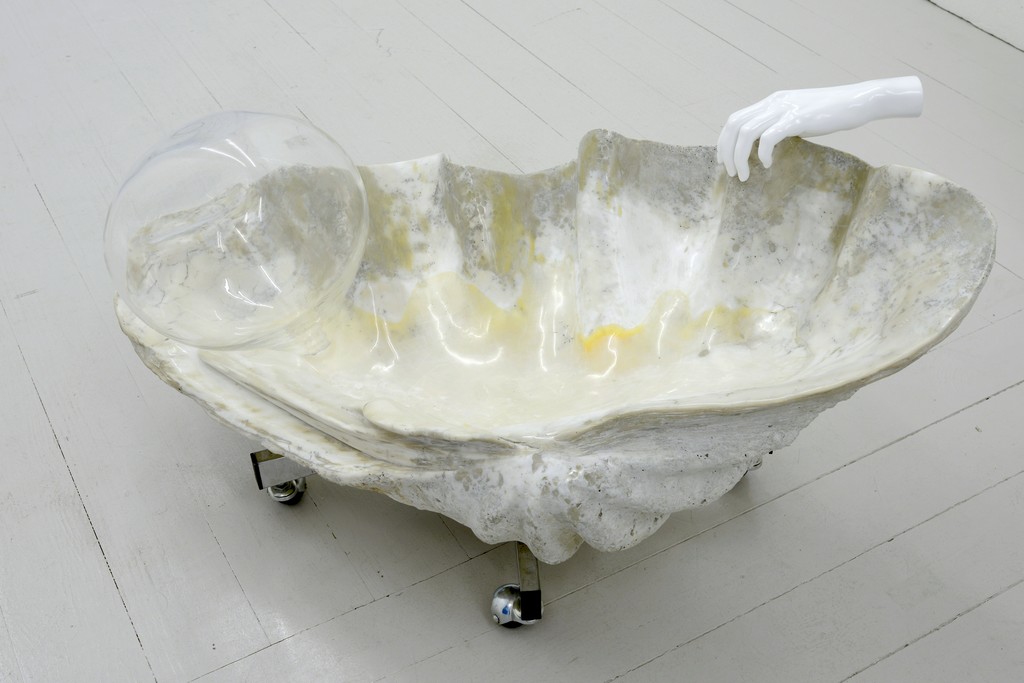 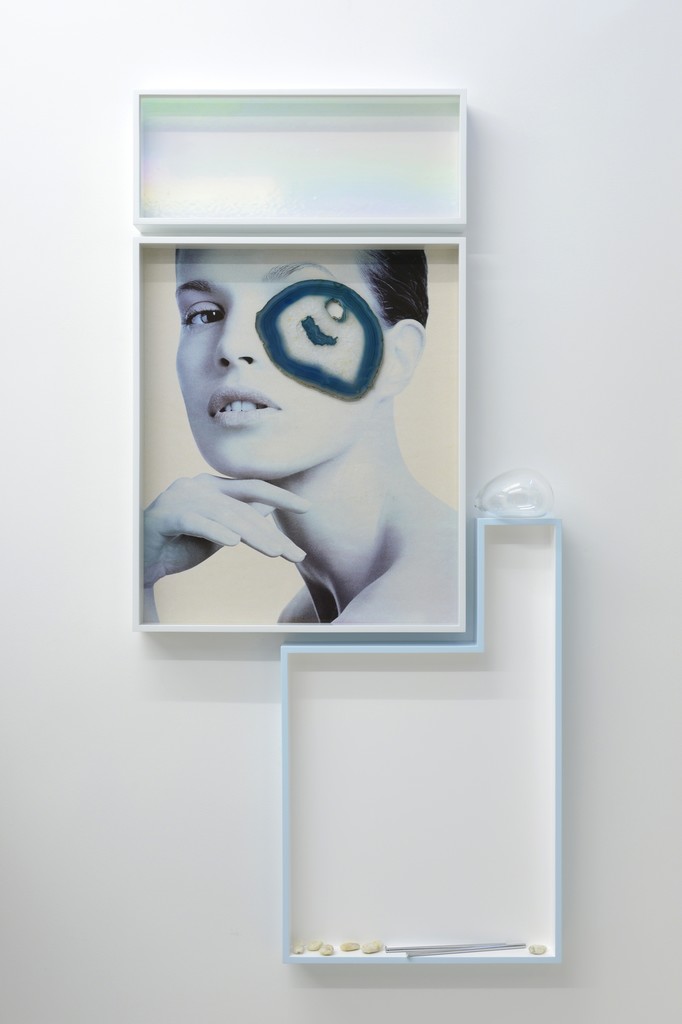 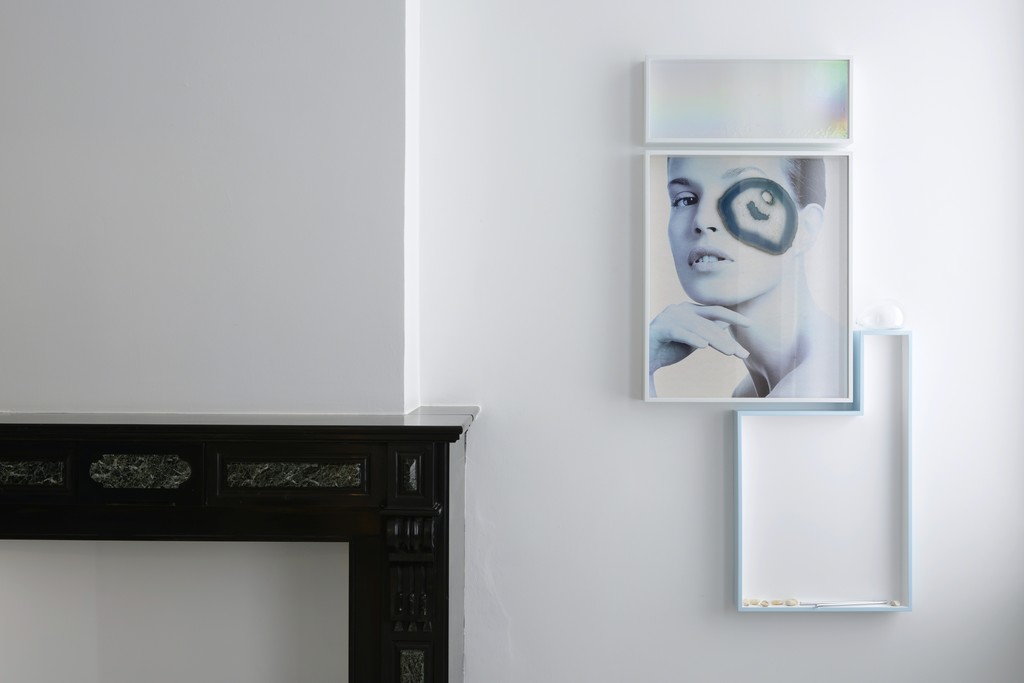 MOT International is pleased to present a new body of work by Gabriele Beveridge. Entitled Mainland, the exhibition is illustrated by an image that presents the opposite: a desert island. The sun bleached advertisement stages a destination on the fringe of the world; once a place of luxury, it is now forgotten, abstracted and submerged in shades of blue.

Representations of the island have shifted over the centuries. If for the ancient Greeks, the insular world was a mystical land inhabited by the gods, it became with Thomas More the ideal marginal space for the development of utopian societies. Depicted as a floating piece of earth, suspended in the middle of the sea, the island is promoted today through advertising as a place of leisure and relaxation, detached from the mainland and society.

The artworks in the exhibition echo this duality, conflict and mysticism of Island and Mainland in form and feeling. Here we witness found and made objects: a structure made of chrome, usually used as storage units for shop displays, is pushed until it becomes uncannily wrong, while off kilter glass bubbles clutch to the edges of obsolete advertisements portraying young and distant women whose image is aged and discoloured.

Relentlessly pursuing the edges of a paradise and beauty ready to burst, Beveridge creates an installation that plays with the stereotypes of the island and in which advertised fantasies are merged and conflated. The insular world is presented through an almost clinical aesthetic, as the place for infinite introspection, both enclosed and open to the world.

You bring everything you know that’s real. From the unending isles of Dreamland to your compact home. Billionaire baby. When it bursts you are born…

Gabriele Beveridge (born 1985, Hong Kong) lives and works in London. Recent solo exhibitions include: Health and Strength at La Salle de Bains, Lyon (2014); Gold Diamond Park at Elizabeth Dee, New York (2014); By Mistake or Design at the Zabludowicz Collection, London (2014); Incidental Healer at Van Horbourg, Zurich (2013); In A Normal World I’d Be There at OUTPOST, Norwich (2012) and The Conspiracy at Supplement, London (2010).