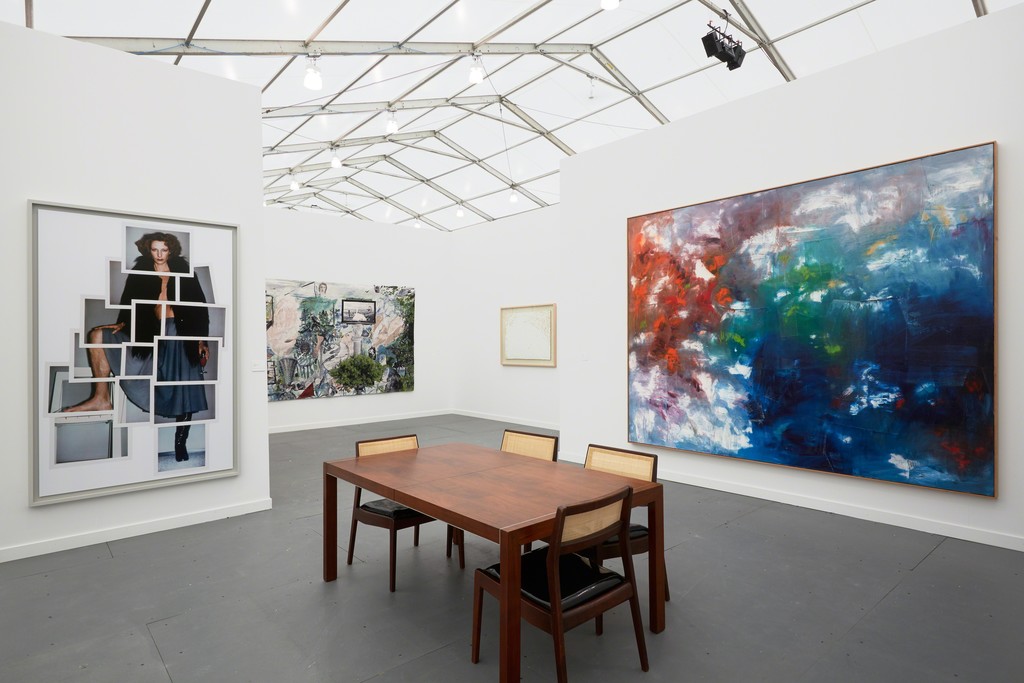 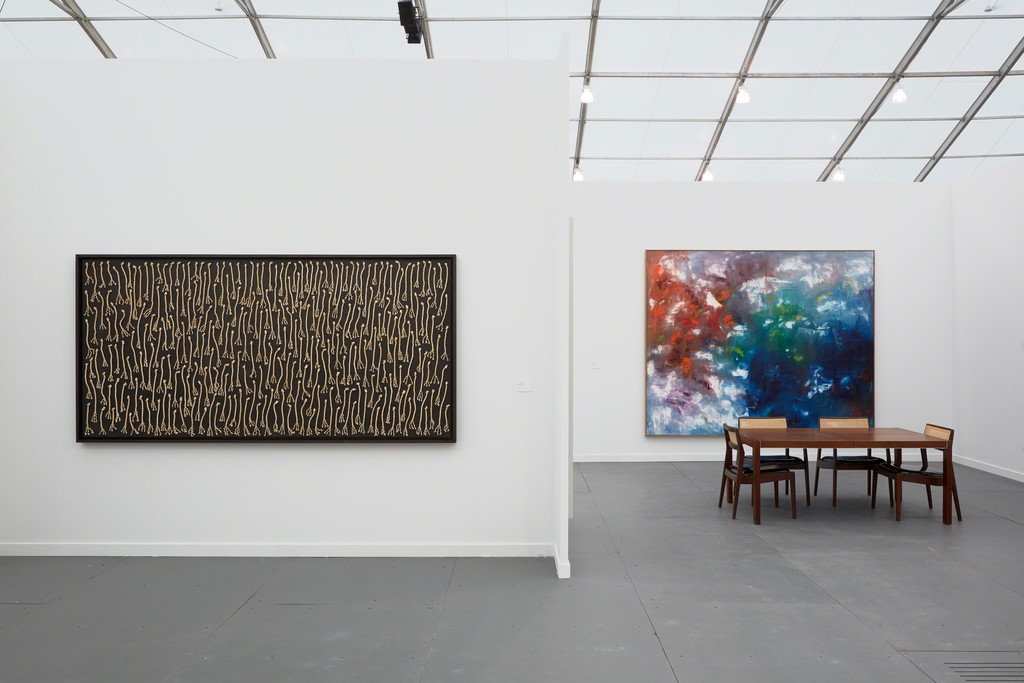 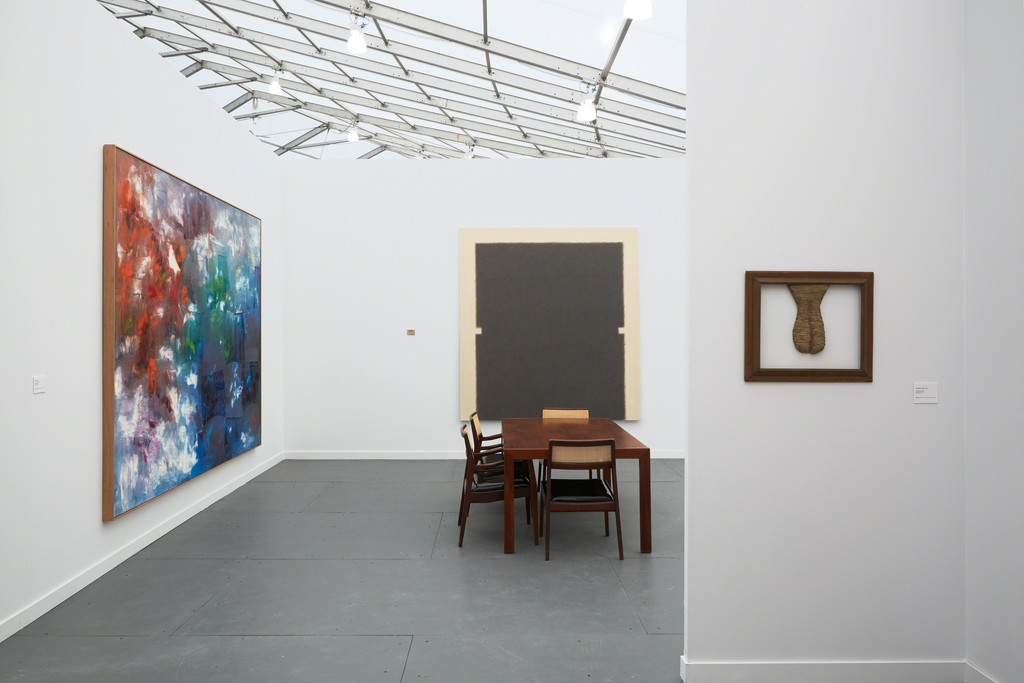 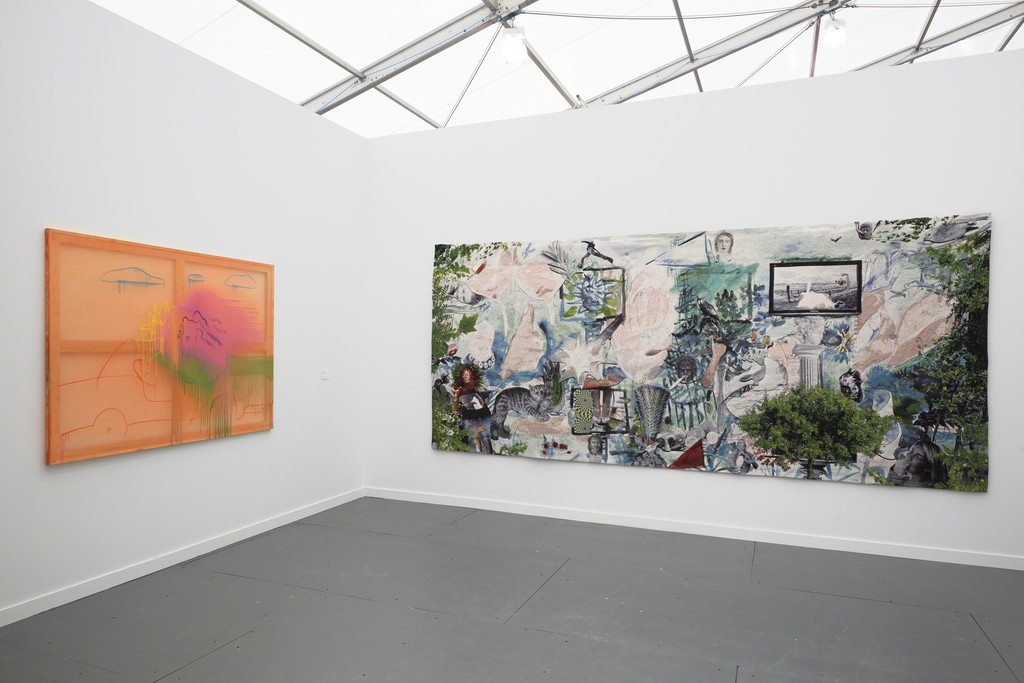 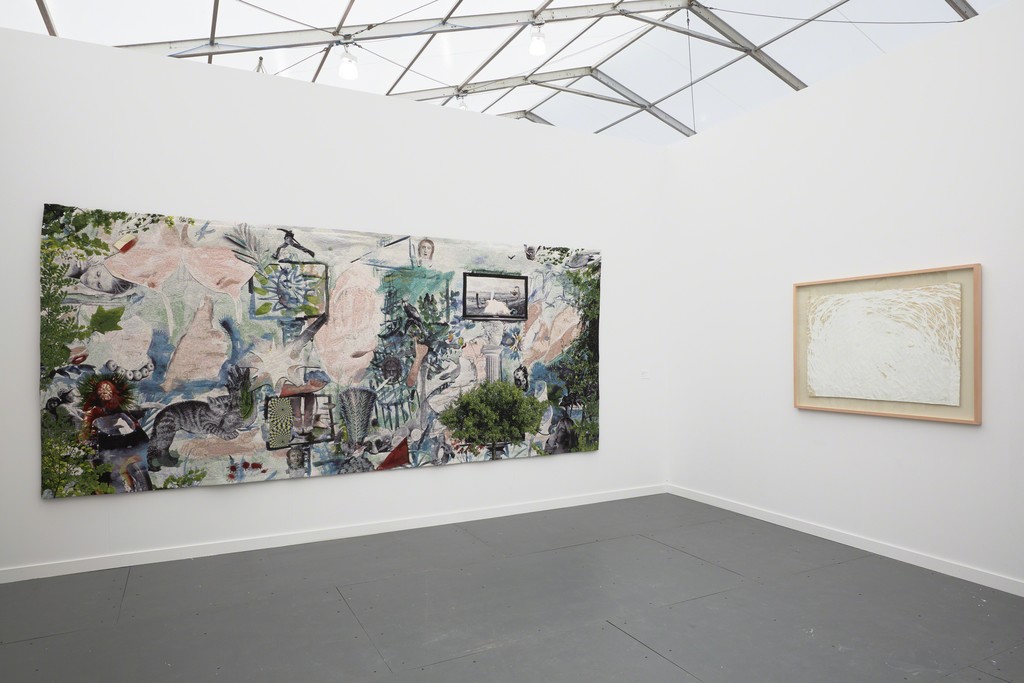 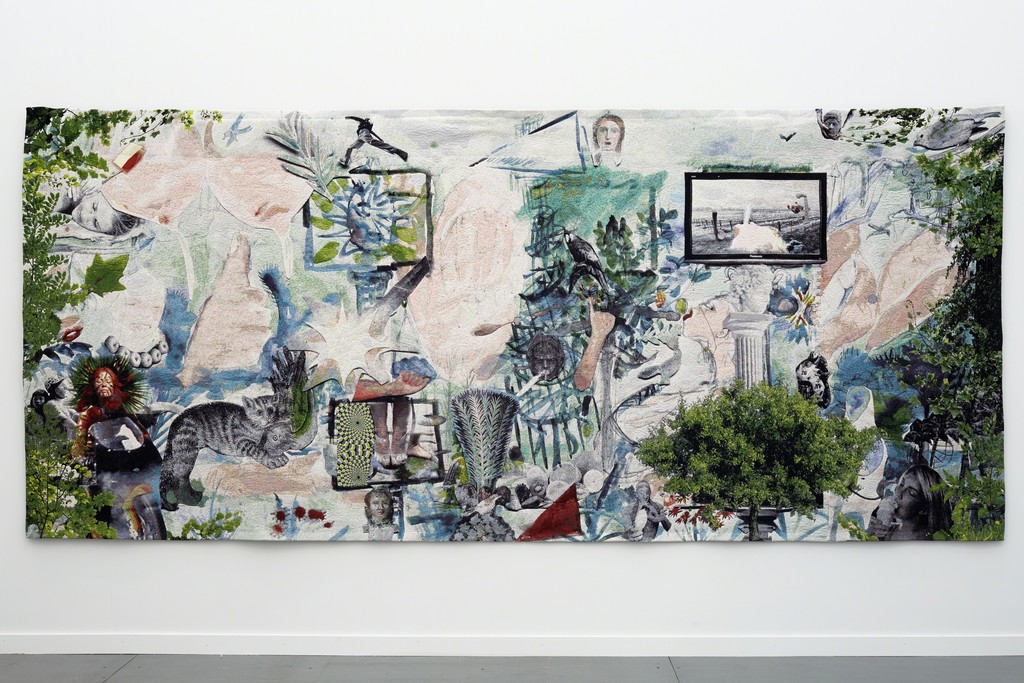 MOT International is delighted to be exhibiting works by internationally
prominent artists, including a newly produced tapestry work by 2013 Turner
Prize winner Laure Prouvost, a selection of recent Artex Paintings by Dan
Rees and a new, large-scale photographic print from the series
Anagrammatic Bodies by Ulay.
Exploring the boundaries between fiction and reality, Laure Prouvost’s work
is composed of videos, ready-made sculptures, sound installations and
paintings. Her new monumental tapestry (200 x 462cm) entitled Swallow
me, From Italy to Flander, a tapestry has been commissioned specially for
Frieze NY and produced in collaboration with Flanders Tapestries. It is based
on Prouvost’s 2013 installation at Whitechapel Gallery, Farfromwords: cars
mirrors eat raspberries when swimming through the sun, to swallow sweet
smells, which resulted from her winning the Max Mara Art Prize for Women.
Inspired by the aesthetic and sensuous pleasures of Italy, the cylindrical
structure interspersed with collages and monitors led to her nomination for
the Turner Prize the same year, along with her immersive installation Wantee
first exhibited at Tate Britain (2013).
In just a few years, Dan Rees has emerged as part of a tradition of artists
whose work is characterised by a conceptually orientated approach to art
making. His work, which often includes elements from his own biography,
such as his Welsh heritage, childhood memories of Swansea and aspects
of middle-class life, explores the possible correlations between modernity
and nostalgia, focusing on communities’ attempts to reinvent their past
traditions through innovative ways. Such ideas are particularly visible in
his series of Artex Paintings, in which the artist has combined an energetic
use of colour with the material artex, a popular form of surface coating for
ceilings that has been adorning working-class homes in Great Britain since
the 1970s. By entering the gallery space or even collectors’ homes, this
material is raised to the status of high-culture, somehow completing the
circle.
The renowned Dutch-German photographer and artist Ulay was one of
the leading representatives of body art and performance in the ‘70s and
‘80s. Questioning the relationship between gender and identity, his body
of work is notable for its experimental use of photography, particularly in
his use of Polaroids, such as the Renais–sense series produced with Paula
Françoise-Piso and signed with the composite name PA-ULA-Y. Based on
his Anagrammatic Body series from the mid-1970s, a new large-scale print
(212 x 130cm) will also be exhibited. Initially conceived as illustration for
the Dutch magazine Avenue and consisting of Polaroid collages, this series
present the artist himself as half man, half woman, inviting the viewer to
rethink the normative ideal of identity. Ulay made many works with longtime
collaborator, artist Marina Abramović; their separation marked by the
famous Great Wall Walk performance in China (1988).
Characterised by simplicity of form and gesture, Simon Mathers’ paintings
concurrently explore figuration, colour, ground, texture and mark
making. The artist draws on imagery found in newspapers, flyers and
advertisements, as well as moments from his daily activities. A captured
moment on the bus, familiar objects such as sunglasses, cheese, window
blinds, cigarettes and other anonymous subjects often reappear in the
studio, translated into studies of surface and process. Mathers’ almost
monochromatic paintings appear as colourful and minimalist compositions
in which the precision and refinement of the line are highlighted.
Spanning over three decades, the practice of Amikam Toren compels a
wide range of international art movements, such as Arte Povera, Gutai,
Minimalism and Pop. His work often incorporates the destruction of readymade
objects that are then resurrected in the artist’s own paintings and
sculptures, as in his series of Reproduction Paintings and Of the Times, which
was created between 1983 and 1993. The latter consists of large-scale
paintings that depict monumental, sometimes indiscernible letters, made
from pigment derived from pulped editions of The [London] Times. The
masthead of each obliterated newspaper is displayed beside the canvas
that displays its remains, drawing attention to the disparate realities of
disposable daily papers versus timeless paintings and to the way the artist
has distilled hundreds of column inches of text into a single consonant or
vowel.
As one of the first generations of South Korean artists to embrace radical
experimentation in art, Seung-Taek Lee has been at the forefront of
Korean avant-garde art since the 1950s. Through his diverse and highly
individualistic practice, Lee questions established political, social and
artistic values, thereby consistently pushing the boundaries of art and
culture. He is best known for his conceptualisation of ‘non- sculpture’ which
not only signifies a rejection of values traditionally attributed to sculpture,
but also of existing ideas or orders, as articulated through site-specific
installations, land art and performances. In Bull’s Balls (1958) and People
at the Square (1965) from his series of bound objects, Lee combined
the frames with cord, subverting the material properties of the object
to challenge notions of physical materiality. Alongside these works, a
previously un-exhibited drawing from the late 1960s will be on display.