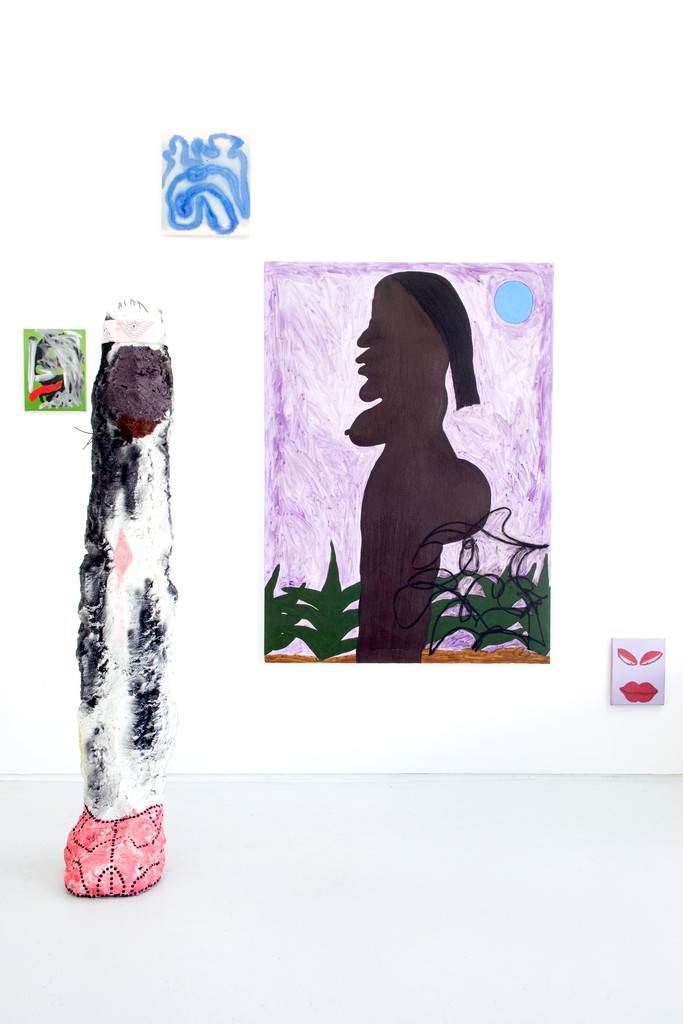 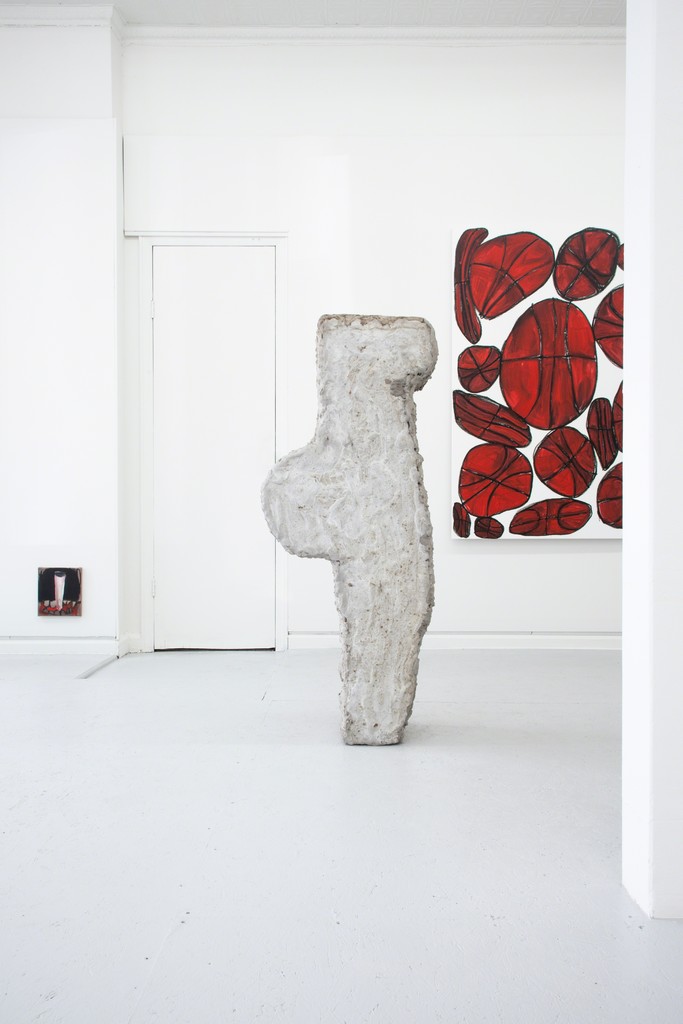 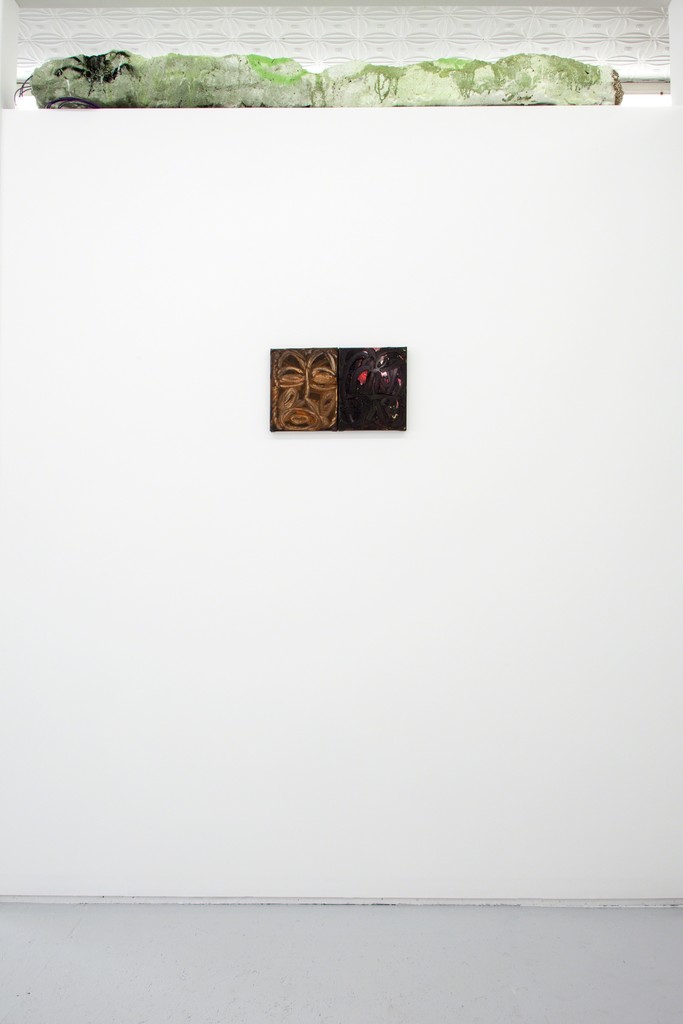 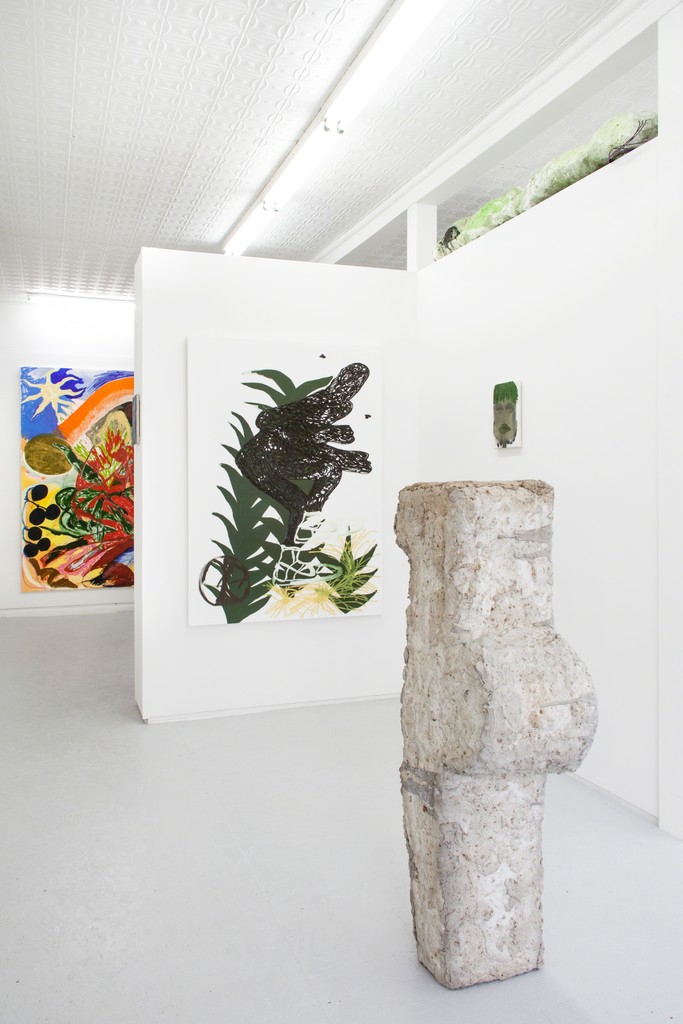 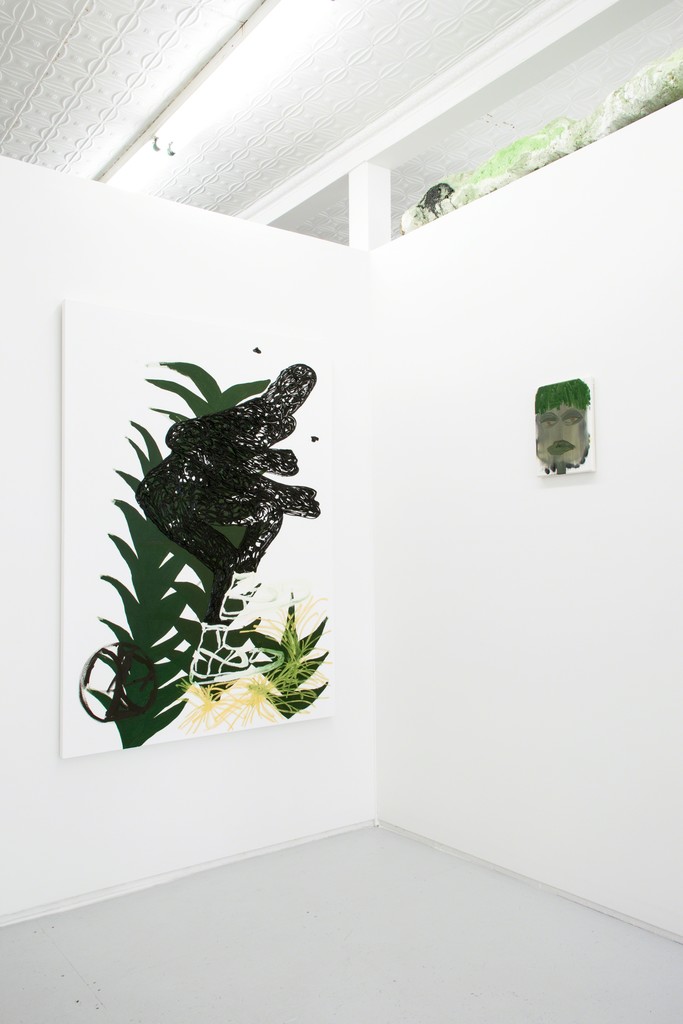 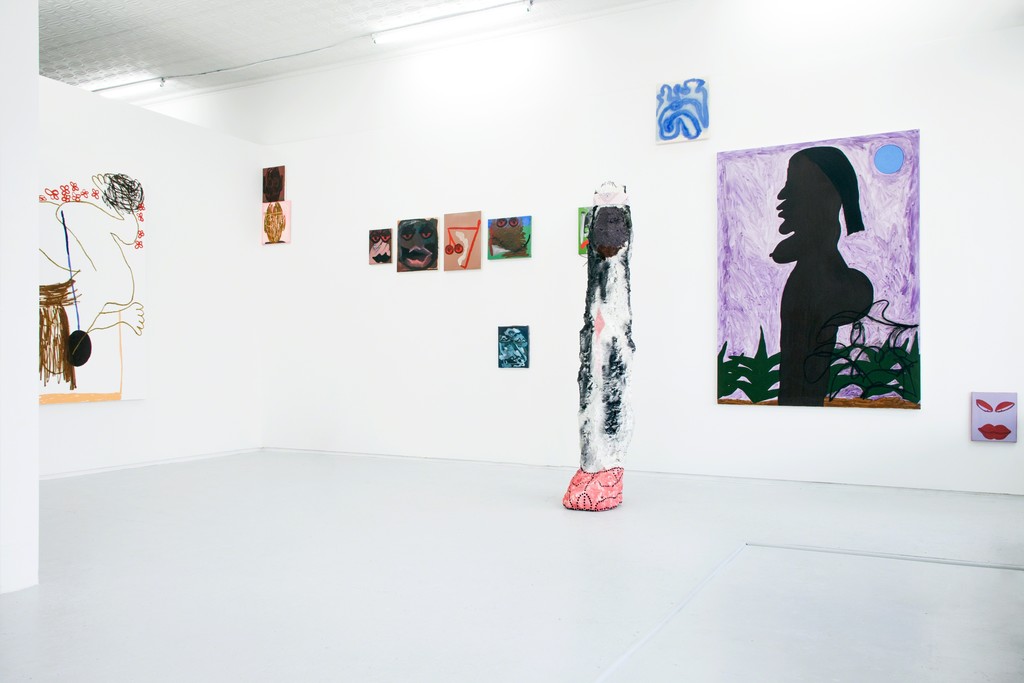 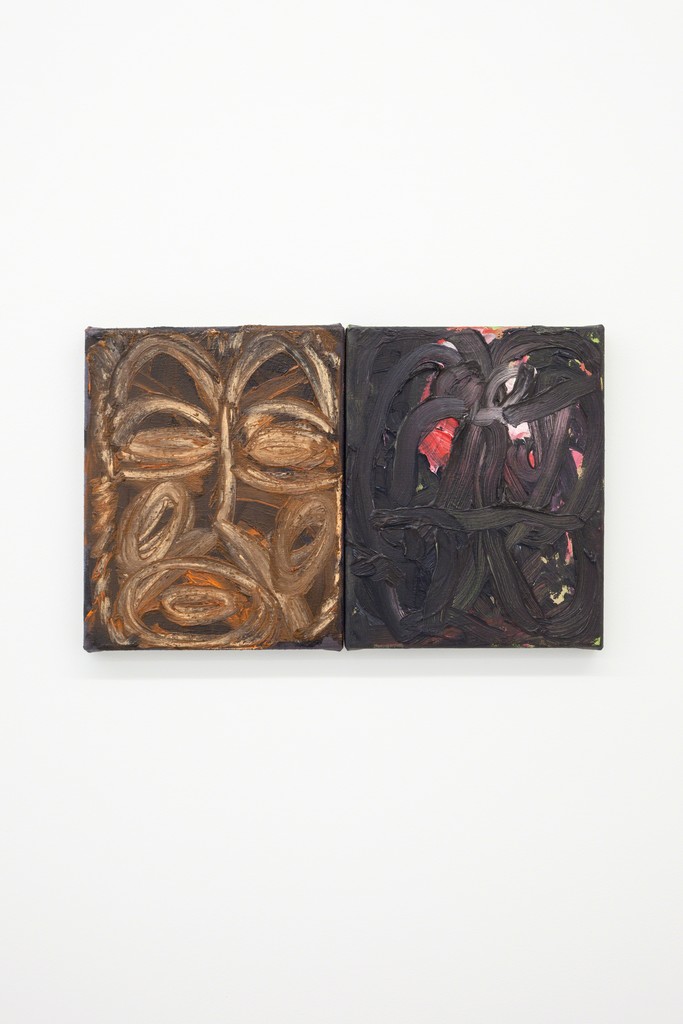 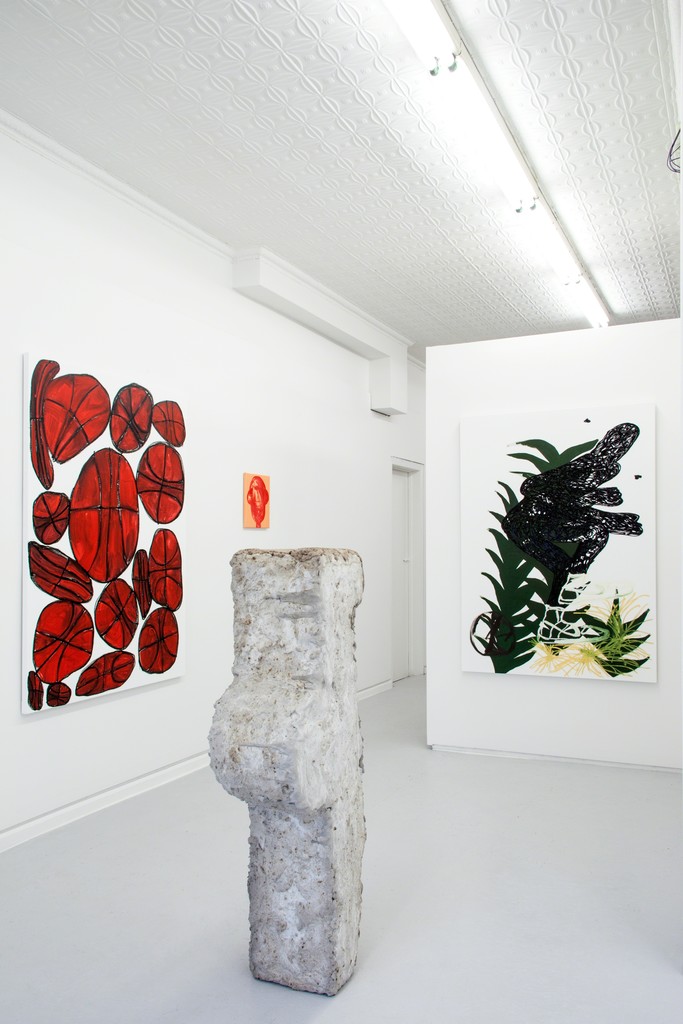 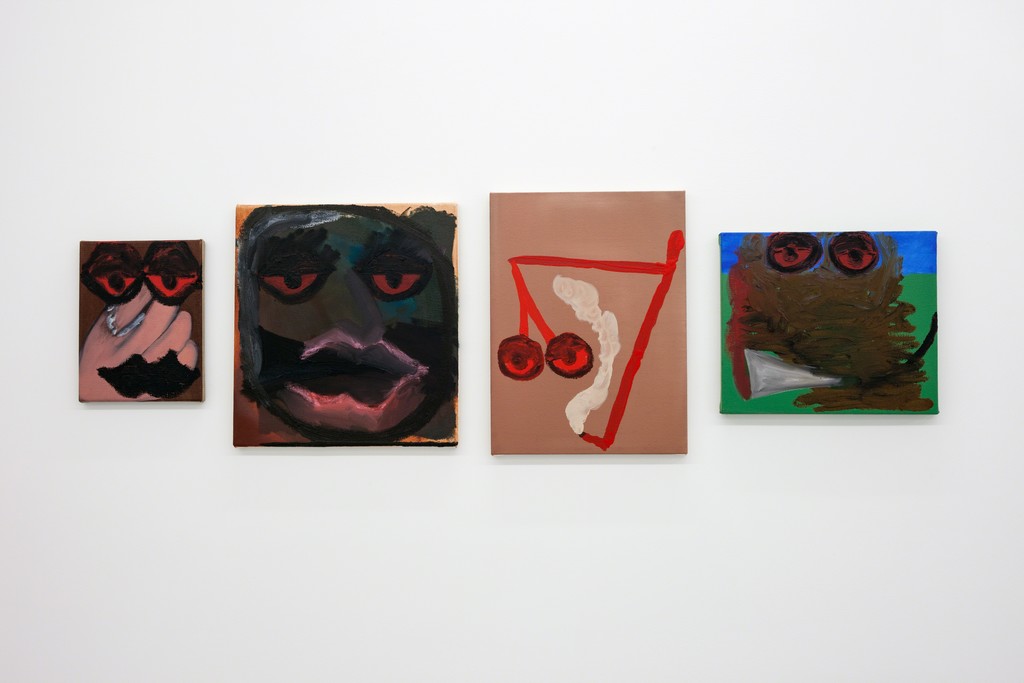 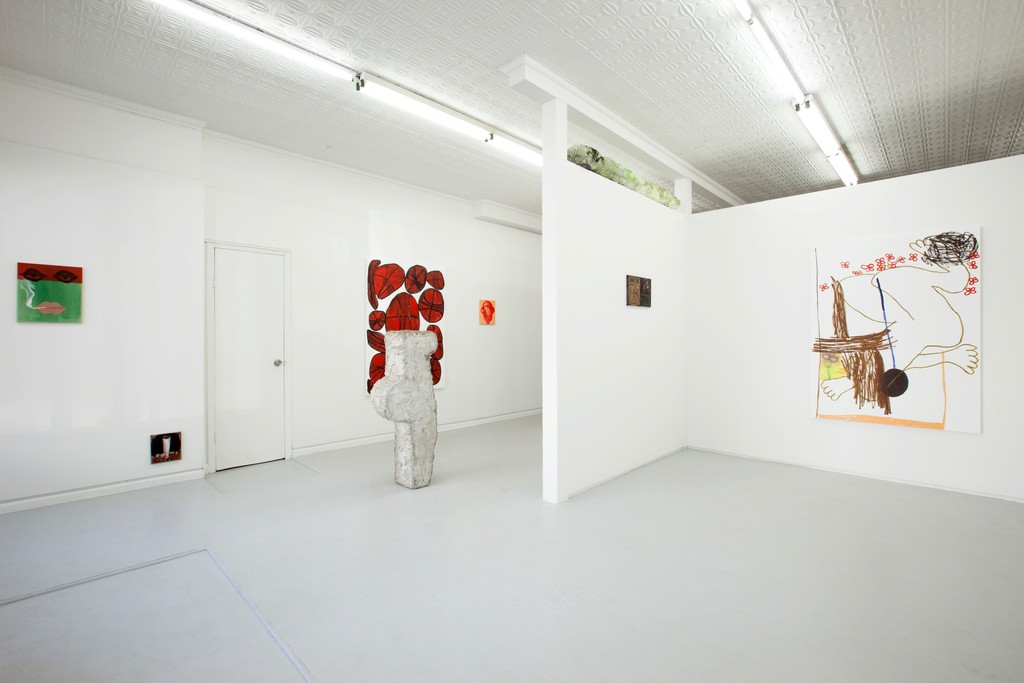 A Night in Kumladia offers a glimpse into an unpredictable world, as exaggerated, yet simplistic landscapes and uncanny figures emerge from the undergrowth. Their faces, enigmatic with expressive allure, cultivate an emotionally clandestine atmosphere. Organic forms and colors spring from the fauna, their complex, fractal natures simplified through Douglin’s hand-drawn sensibility.

Several characters are introduced within the exhibition, including a cast of faces embodying distinct personalities. Each entity, peering out through their constructed habitat, hovers bodiless though not coy. ‘The Creeper,’ a male entity and a centralized figure, wanders through Kumladia, a subject of desire and the male gaze. Various feminine beings also pose through the wilderness, inviting passersby to witness their strange rituals and compulsions. A genderless creature named Joy, parades spirit like and lightheartedly about the midst. Additionally, sculpted figures function simultaneously as guardians and possible voyeurs, engaging a further dialogue between painting, sculpture and the act of viewing.

Douglin’s otherworldly translation is informed by his personal interpretation of art history and its synchronicity with contemporary culture, thus creating multiple dialogues informed by the real world.

Omari Douglin (b. 1992, Brooklyn, NY) received his BFA from Cooper Union. He most recently completed a residency at Hoy Hoy (Mount Tremper, NY). He has been included in recent group exhibitions at, Powrplnt, Motel Gallery (Brooklyn, NY) and LAUNCH F18 (New York, NY). He was also recently awarded the ‘ The Toni And David Yarnell Merit Award Of Excellence In Art. ’ Douglin continues to live and work in Brooklyn, NY.