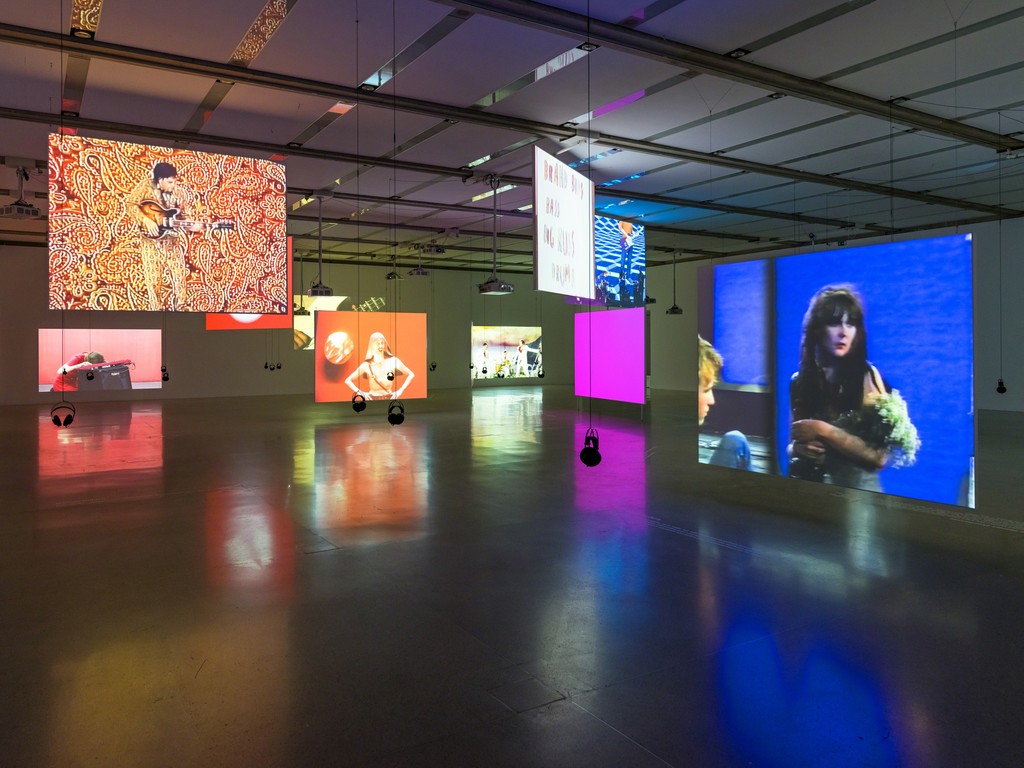 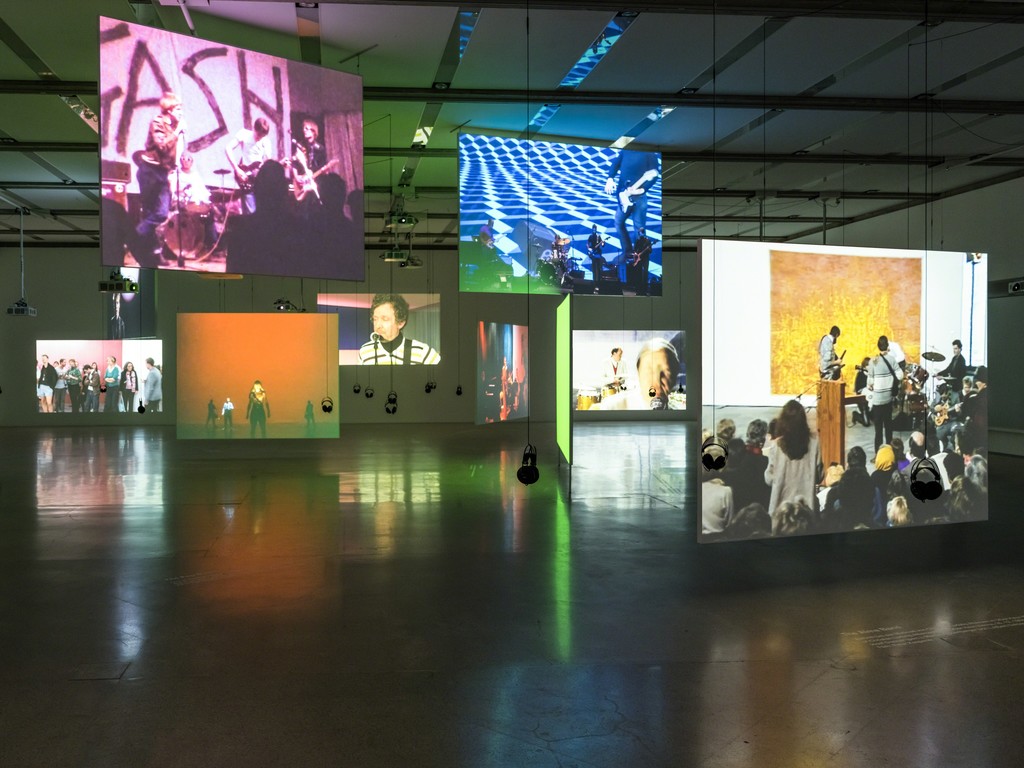 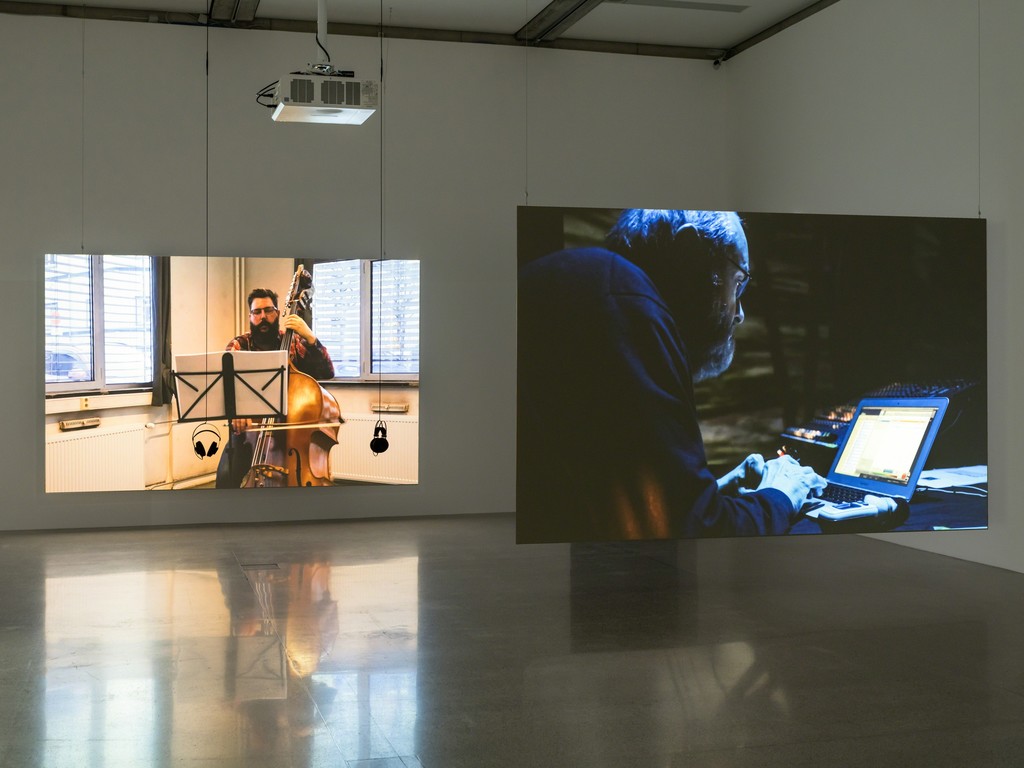 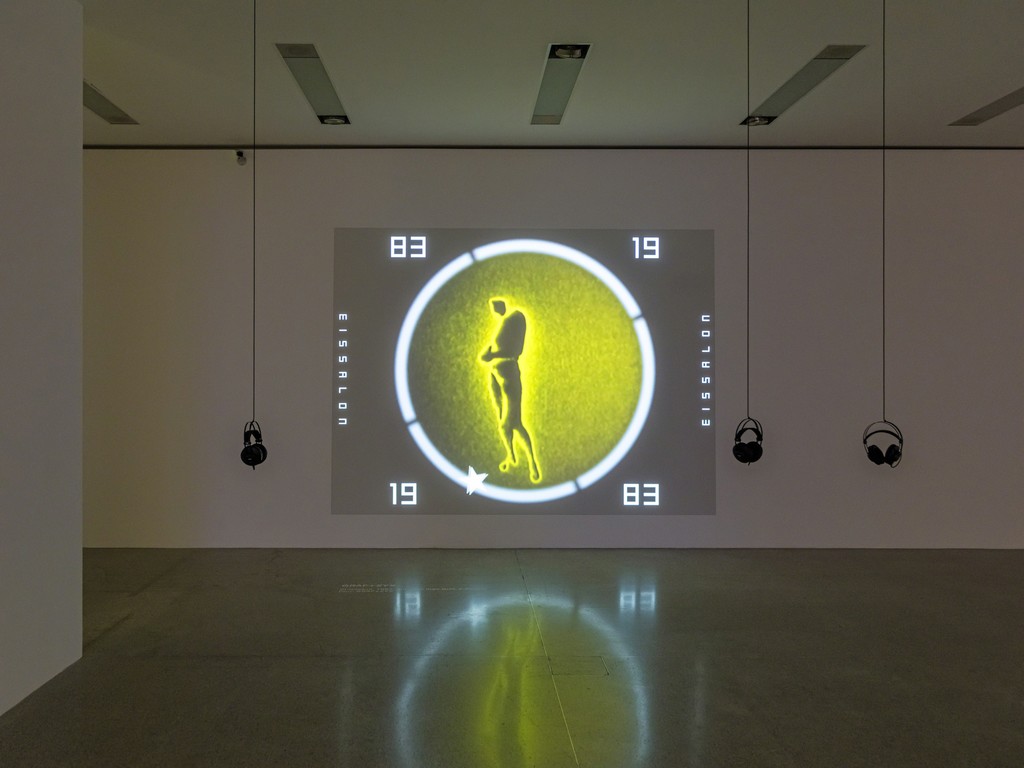 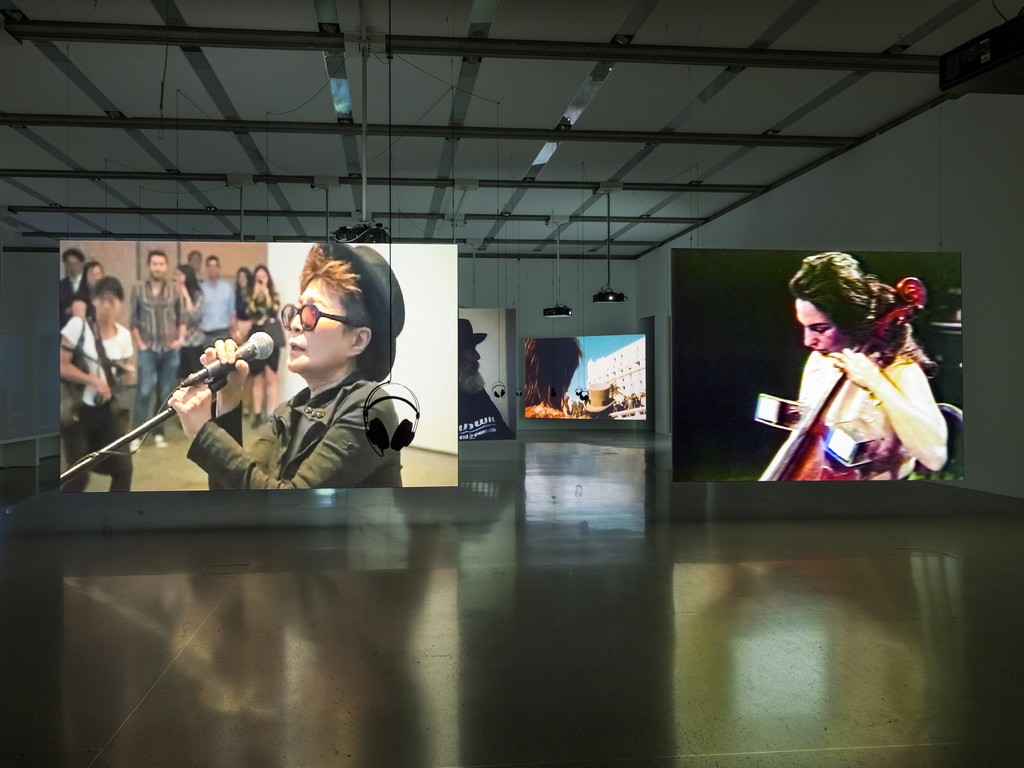 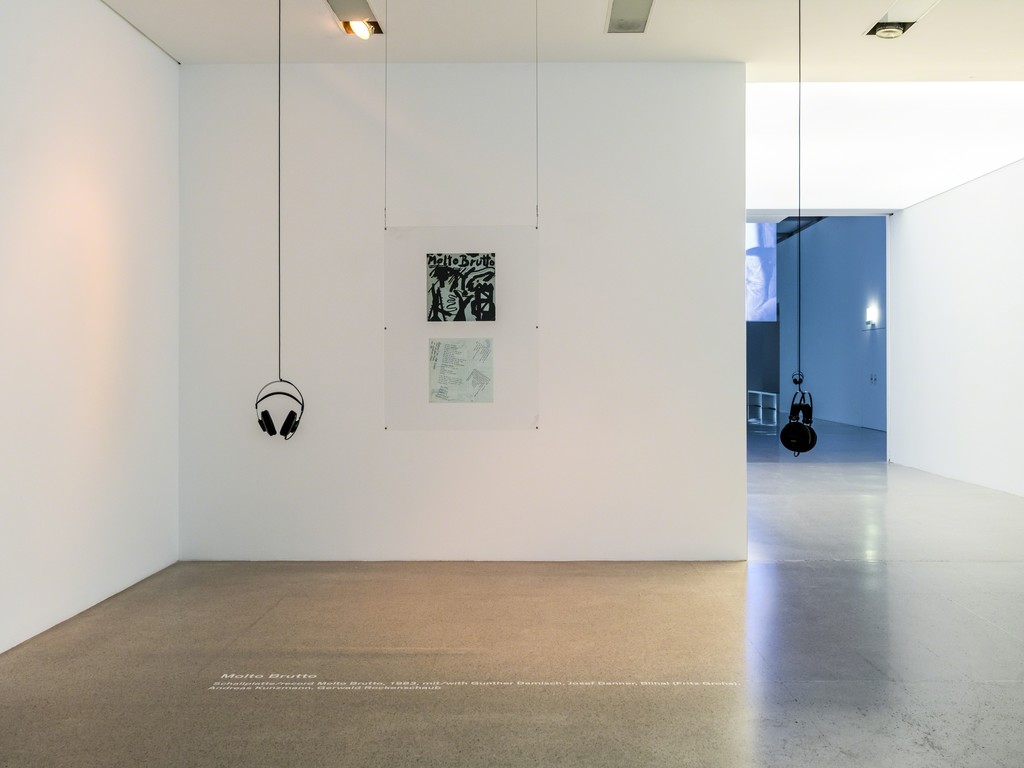 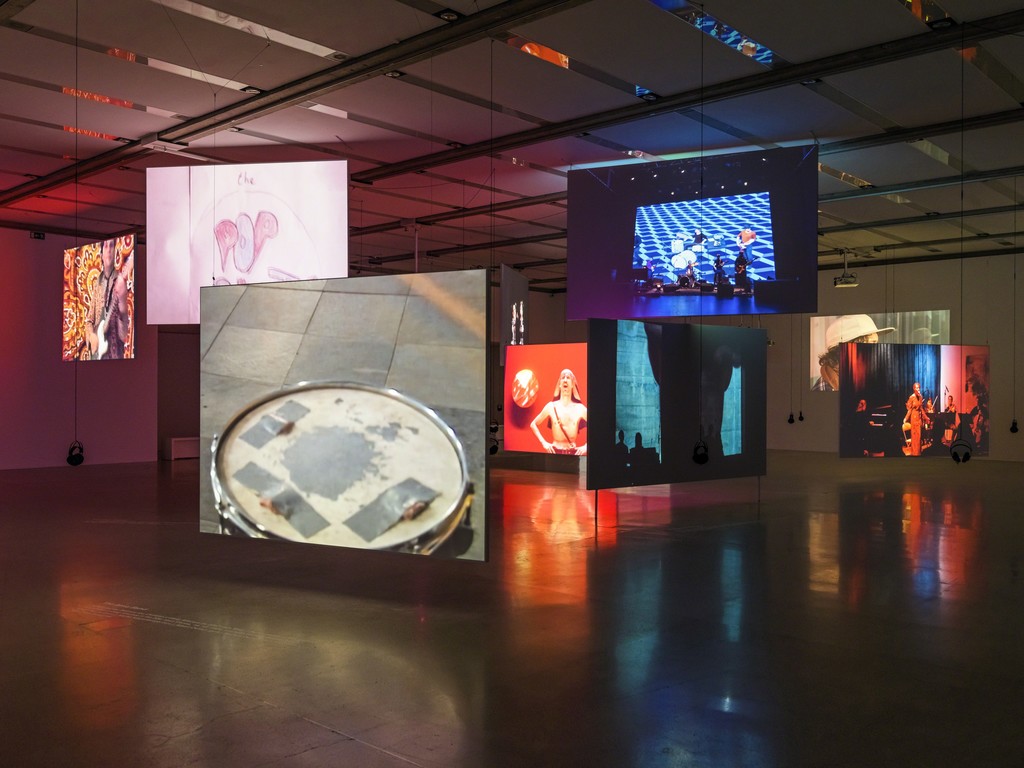 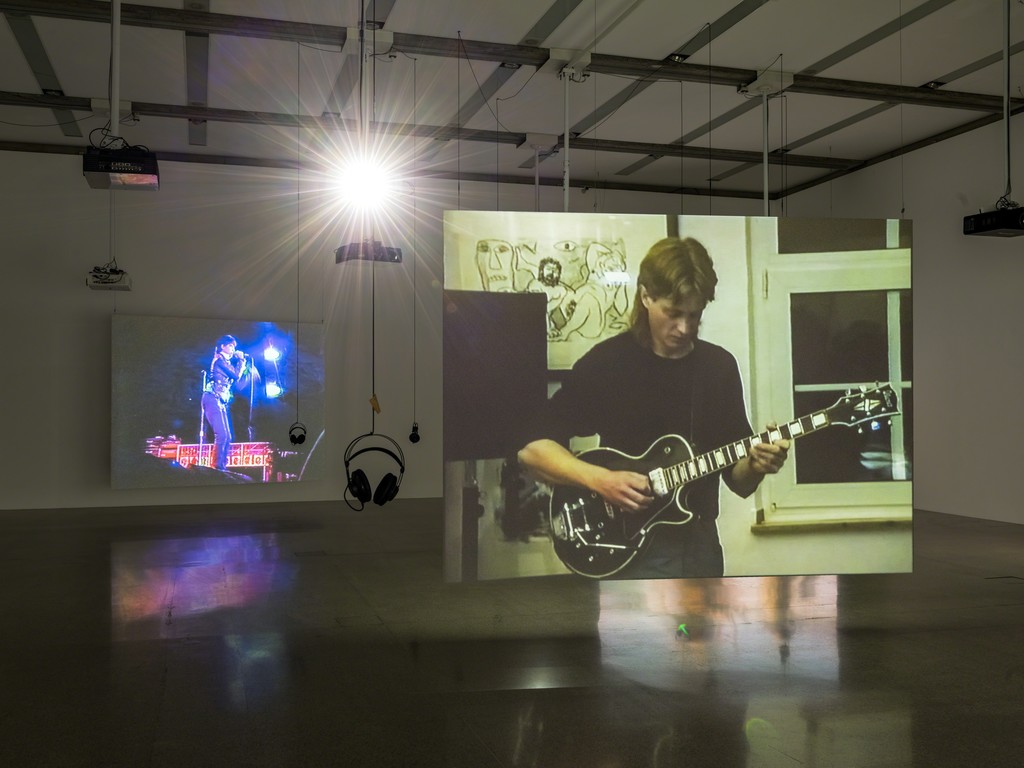 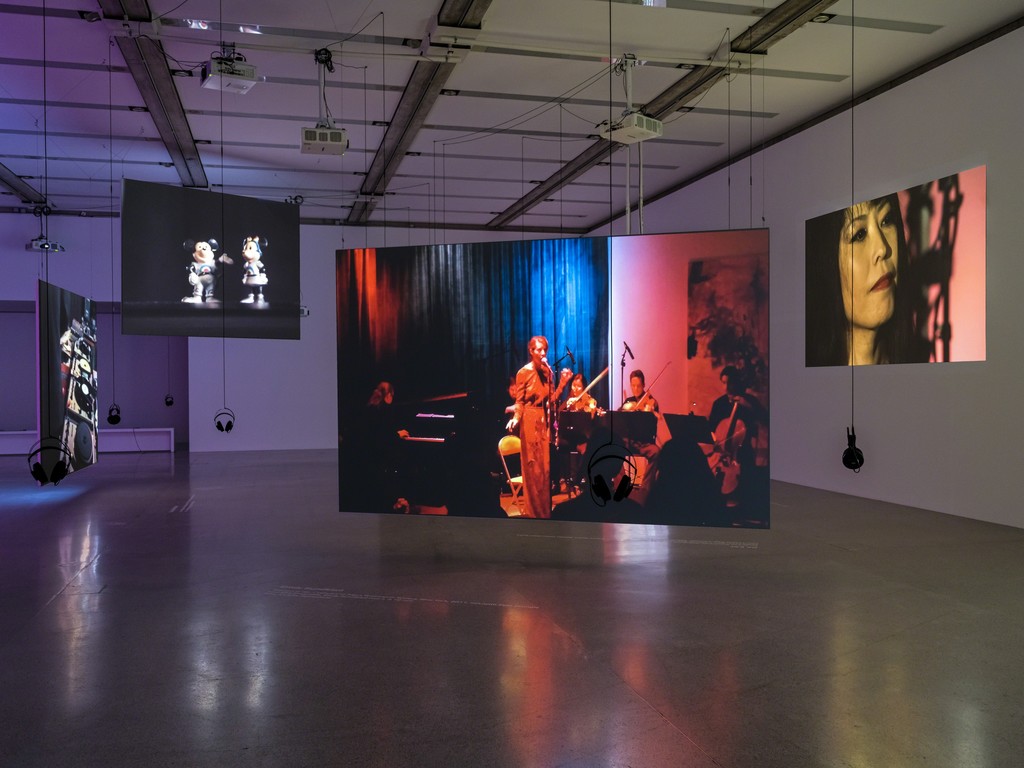 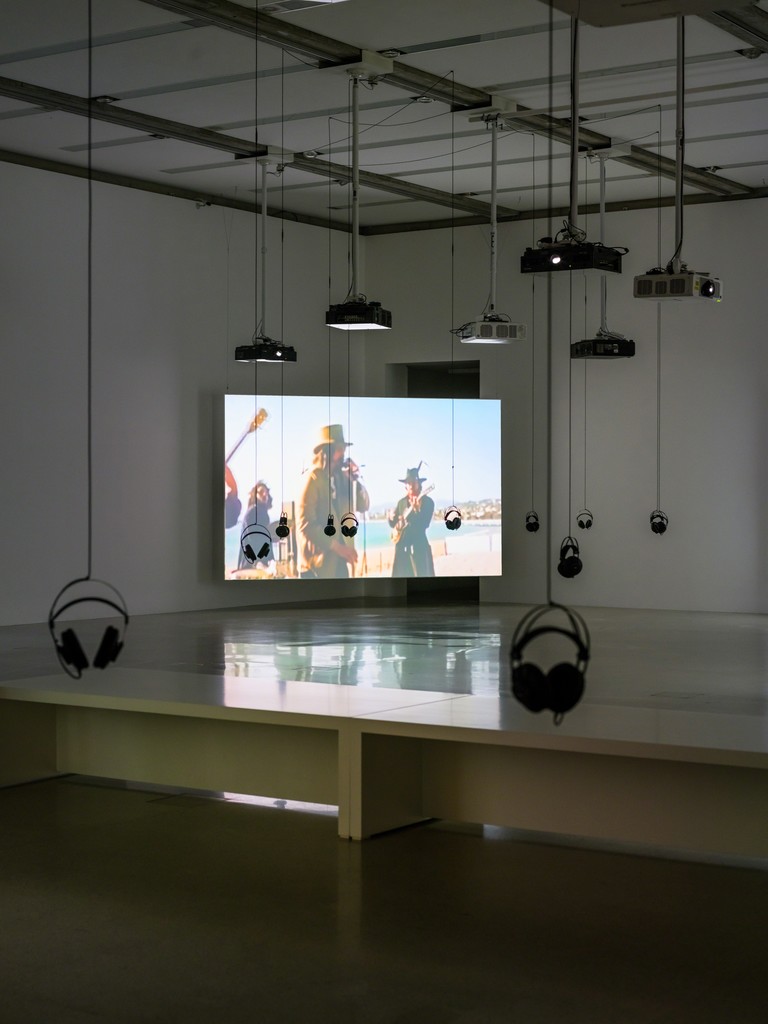 It is quite remarkable how many fine artists also made music. This was much more than just an interest in another medium. Public musical performances and the production of recorded music involve different ways of working and different environments, and also the confrontation with a different audience (not to mention different forms of income).
This is why art critic Jörg Heiser refers to a “contextual shift” between the fine arts and music when he writes about this phenomenon beginning in the 1960s. Alluding to the fact that some artists did not make their work in other fields transparent and open, his book is called Double Lives. It is certainly true that there are many different ways in which individuals can either combine these two fields in their lives and work—or keep them separate. In some cases, work in both fields was only known to insiders. Other artists, by contrast, made a deliberate use of the frame of the fine arts for their musical performances. There is a broad spectrum with many intermediate forms.
From June 22, 2018, a mumok exhibition taking its title Double Lives from Heiser will focus on fine artists who wrote or produced music, who performed it in public, or who were members of artists’ bands. This raises the question as to the difference between pure musicians and artists and those working in both fields. The exhibition will also address the role of music by fine artists within the history of twentieth and twenty-first-century music.

Music as a Work of Art
The exhibition Double Lives will present “only” music, in the form of listening stations, which will be linked with visual material wherever possible—videos and photographs of concert and studio performances. The exhibition will thus respect the significance of the artists’ choices of performance situations. Information about the fine art work of the artists will also be presented.

A Double Life in the Twentieth Century
As early as 1913, the year of his first ready-made, Marcel Duchamp used principles of chance as a compositional method in his Momentum Musicale, while in the same year futurist Luigi Russolo designed his first noise instruments (Intonarumori). Already in classical modernism, fine artists were developing questions and methods that were to define not only the fine arts but also the musical avantgarde.

After World War II, the phenomenon of fine artists making music became more and more significant. Key impulses came from John Cage, a pioneering composer and musician in so many ways, who was always in close contact with fine artists and also himself created a number of visual artworks. In the second half of the 1950s, he taught at the New School for Social Research in New York, where key members of the later Fluxus movement were among his audience—George Brecht, Al Hansen, Dick Higgins, Jackson Mac Low, Toshi Ichiyanagi, Yoko Ono, and Allan Kaprow, as well as George Maciunas and La Monte Young. In addition to Fluxus artists, in the 1960s and 1970s, more and more fine artists also came forward as musicians. Their approaches, questions, and methods often resembled those of the fine arts, as in the case of the Americans La Monte Young, Charlemagne Palestine, and Tony Conrad, whose positions were close to minimal art (and color field painting).

The same is true of the musical work of European artists like Hermann Nitsch, Hanne Darboven, and A. R. Penck and Markus Lüpertz, which remained closer to the Western musical traditions than the music of their American colleagues.
Fine artists also turned to pop music in the 1960s. Andy Warhol’s short but intense support of the band Velvet Underground was an important intervention. Yoko Ono, by contrast, who began as a member of the Fluxus movement, began to develop her own independent pop music in 1968, in parallel to her work as a fine artist.

Important representatives of the double life between the fine arts and music are also to be found among the protagonists in the shift from rock and pop to punk and new wave music. Key figures like Captain Beefheart (as a painter Don Van Vliet) and Alan Vega must be mentioned here.

With the success of these new musical movements, and simultaneous with a booming return to painting after the years of conceptual and performance art, the late 1970s and the following years saw a high point in the phenomenon of bands consisting partly or entirely of fine artists. It was not least the art schools that became key focuses for the development of a more or less professional (or often also deliberately amateurish) collective form of musical performance.

For America, Mike Kelley and his collaborators must be mentioned, including Jim Shaw, Tony Oursler, Mayo Thompson, and Cameron Jamie; in Europe, various representatives of “new painting,” such as the circle around Martin Kippenberger, and Albert and Markus Oehlen. The deliberately provocative and subversive names that important bands selected at this time included Destroy All Monsters, The Red Crayola, Titankatzen (Titanic Cats), and Die tödliche Doris (Deadly Doris). This field was initially dominated by men, but from the mid-1980s more and more women shook the scene up, among them Jutta Koether (who later repeatedly performed with Kim Gordon) and Pipilotti Rist as a member of the women’s group Les Reines Prochaines.

From the 1990s, the music of fine artists entered into a period of stylistic pluralism, corresponding to developments in the visual arts. Within the broad spectrum of musical approaches, electronic music and working as a DJ became more significant. Examples include Kai Althoff, Angela Bulloch, Martin Creed, Christian Marclay and Carsten Nicolai.

The Fine Arts and Music in Austria
One focus of the exhibition is on musical projects by artists from Austria. The phenomenon of music-making fine artists also gained ground in the 1960s in Austria. Alongside important names like Christian Ludwig Attersee, Gerhard Rühm and Hermann Nitsch, early protagonists were also found among the Wiener Gruppe and Vienna Actionism. In the early 1970s, they performed collectively in Germany under the title Seldom Heard Music. The Hotel Morphila Orchester, founded by Peter Weibel and Loys Egg in 1978, can be seen as a precursor of local artists’ bands in the 1980s. Molto Brutto and Pas Paravant were two of the most important formations among many fine artists making music from the 1980s on, including Graf/ZYX, Martin Guttmann, Hans Weigand and Heimo Zobernig, and the younger generation with Manuel Gorkiewicz and Christian Kosmas Mayer.

Fri, June 22, 9.30 pm
Phill Niblock with Martin Zrost
Venue: mumok kino
Phill Niblock is one of the founding fathers of drone music, and he began composing his complex music back in the 1970s. He overlaps extended notes, a large range of beats, and sophisticated overtone patterns to create fascinating psychoacoustic effects.

Thu, October 4, 7 pm
Hermann Nitsch (organ concert)
Venue: the exhibition
Hermann Nitsch is not only a sculptor. He has also written a large oeuvre of music, consisting of pieces composed for orchestra, organ (harmonium), and string quartets. In this concert at mumok, he will play a piece for organ.

Sat, October 6, 10 pm
Hanne Darboven (played by Michael Duch during the Long Night of the Museums at mumok)
Venue: the exhibition
Professor of music and double-bass player Michael Duch from Trondheim performs Hanne Darboven’s music in terms of a marathon with musical forms of movement and repetitive rhythms.
Thu, October 11, 7.30 pm
Essachai Vow (Christian Kosmas Mayer und Alexander Wolff)
The band name Essachai Vow comes from a fictional Stone Age language and means “hunger.” The music of the two visual artists Christian Kosmas Mayer and Alexander Wolff is influenced by jazz and kraut rock. They combine their “hunger” for idiosyncratic compositions with low-fi and dream pop.

Thu, October 25, 7.30 pm
Emily Sundblad and Band
Artist and musician Emily Sundblad performs in many different musical contexts—as a soloist, with new interpretations of Schubert, and as a folk singer, redefining the music of the legendary Shirley Collins and unsettling the New York art-rock scene with her friends and artists like Rita Ackermann and Jutta Koether.

We wish to thank the mumok sponsors, Dorotheum and UNIQA, and our media partners Der Standard,
Falter, Wien live, and Ö1.