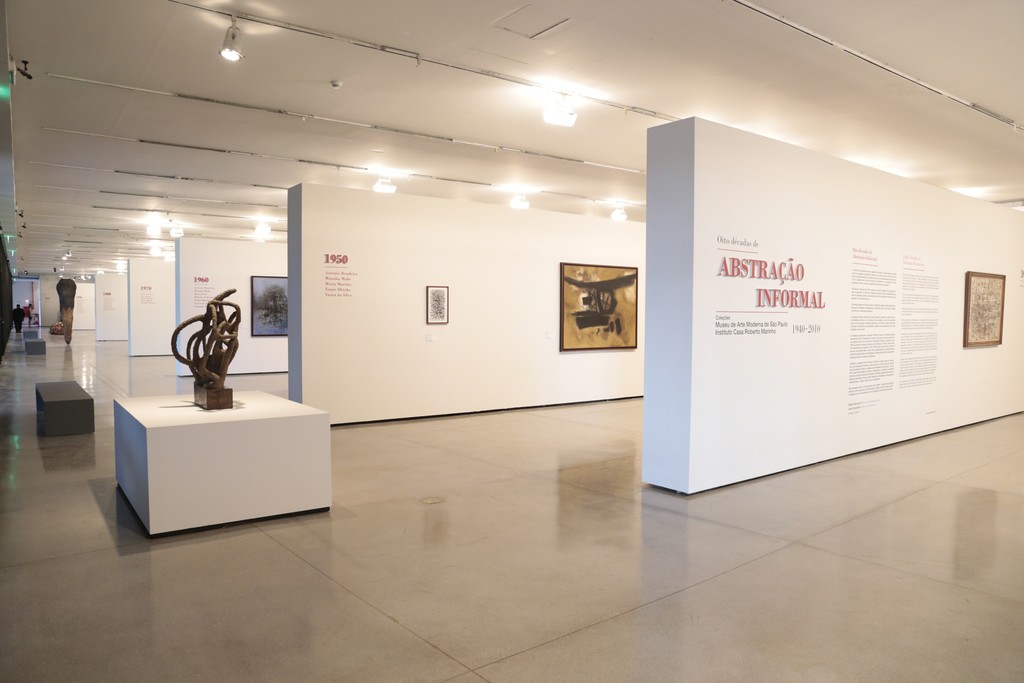 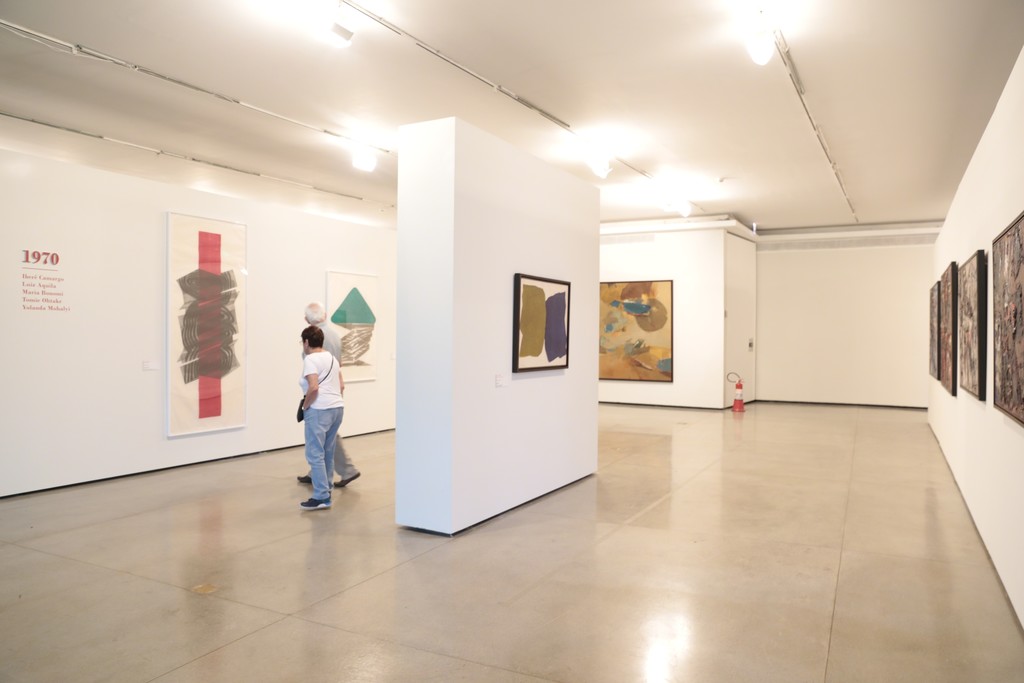 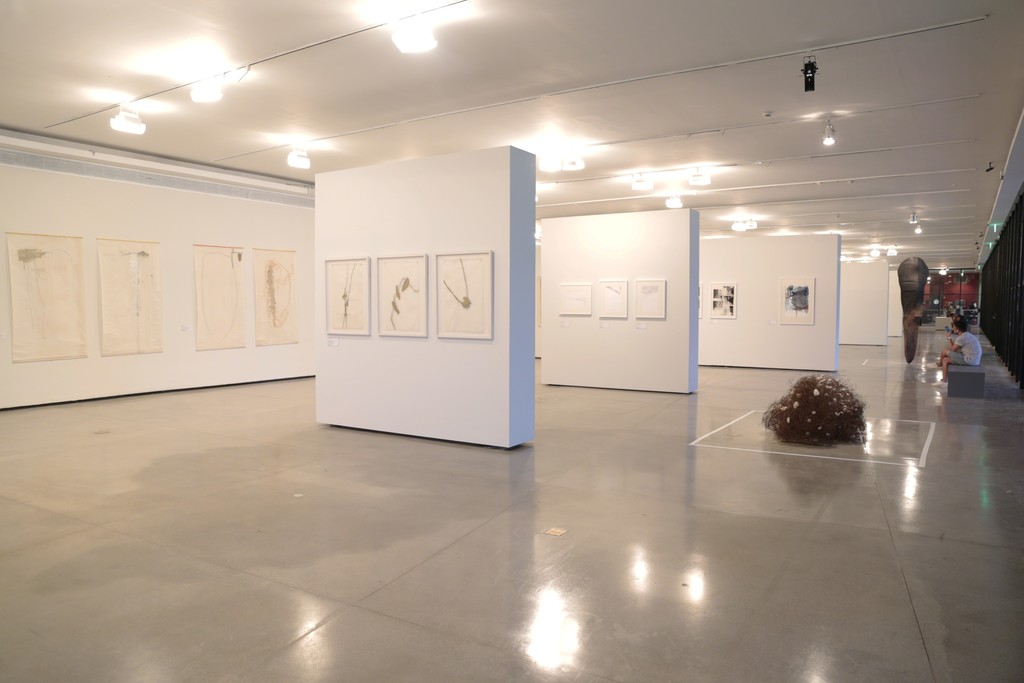 Curated by Lauro Cavalcanti and Felipe Chaimovich, the exhibition brings together over 80 works from two of the most important collections in this field in Brazil, and marks the beginning of a partnership between the museum and the Rio de Janeiro institution; precursors of the movement, such as Maria Martins, Antonio Bandeira, Iberê Camargo, Manabu Mabe, Tomie Ohtake, Vieira da Silva, and more recent representatives including Jorge Guinle, Fábio Miguez, Paulo Monteiro, Nuno Ramos, Angelo Venosa and Lucia Laguna, are among the 38 names
which comprise the show

From January 16th (opening to the public at 20.00) to April 22nd 2018, MAM – Museu de Arte Moderna de São Paulo (The Museum of Modern Art of São Paulo), will host the exhibition Oito décadas de abstração informal (Eight decades of informal abstraction), bringing together 83 works by celebrated artists who adopted the abstract style without abandoning artistic expressiveness in their painterly and sculptural gestures. In combining two of the most significant Brazilian collections, the permanence and potency of informal abstraction over the last 80 years is revealed. The show brings together 36 works from the Instituto Casa Roberto Marinho and 47 from MAM. The works cover the period from the end of the 1940s up to the year 2012.

MAM celebrates its 70th anniversary in 2018 and the Instituto Casa Roberto Marinho opens its doors to the public in March of the same year, in Cosme Velho, at the former residence of the journalist from whom the institute takes its name. “These are two pivotal moments in the history of Brazilian art. There could be no better time to establish this partnership”, observes Felipe Chaimovich, curator of MAM.

Chaimovich was responsible for selecting the museum’s works, while Lauro Cavalcanti, the director of the Casa Roberto Marinho, chose the works of the institute. “The idea was to engineer a meeting between these two complementary collections”, explains Cavalcanti. “The Casa Roberto Marinho owns the post-war works, when abstractionism emerged in Brazil, with works dating from up to 1986. Among the oldest works in the exhibition are an oil painting from 1949 by Vieira da Silva and a sculpture from 1954 by Maria Martins. However, there are also works produced more recently in Brazil, derived from the field of informal art, belonging to the Museu de Arte Moderna de São Paulo, and which date from the 21st century, as in the case of the video by Thiago Rocha Pitta (2011), and an acrylic on canvass by Lucia Laguna (2012), adds the curator.

Felipe Chaimovich has been the curator of the Museu de Arte Moderna de São Paulo since 2007. He has a doctorate in philosophy from the University of São Paulo (1998) and a post-doctorate in philosophy from the same university (2000). He was the curator of the 29º Panorama da Arte Brasileira do Museu de Arte Moderna de São Paulo (29th Panorama of Brazilian Art of the Museum of Modern Art of São Paulo) (2005), and of the Festival Internacional de Jardins do MAM no Ibirapuera (International Gardens Festival of Mam at Ibirapuera) (2010), of Encontros de Arte e Gastronomia (Encounters between Art and Gastronomy) (MAM, 2012), of the Museu Dançante (Dancing Museum) (MAM, 2105) and of O impressionismo e o Brasil (Impressionism and Brazil) (MAM, 2017). He is the author of “Greenberg after Oiticica: Teaching Art Criticism Today”, in Elkins et al. (eds.), The state of art criticism (New York: Routledge, 2008) and “Brazil: Art after 1980”, in Oxford Art Online/Grove Dictionaries of Art (Oxford: Oxford University Press, 2014).

Lauro Cavalcanti is an architect, anthropologist, curator of exhibitions and writer. The author of several books on architecture, aesthetics and society, he won awards from the Instituto dos Arquitetos (Institute of Architects) in 1979 and 2001 for “Arquitetura Kitsch” (“Kitsch Architecture”) and “Quando o Brasil era Moderno” (“When Brazil was Modern”). He published “Dezoito graus” (“Eighteen Steps”), his first book of historical fiction, in 2015. He was a visiting researcher at the National Gallery, Washington D.C. in 1996 and at the Canadian Centre of Architecture, Montreal, in 1999. He is an advisor of the Casa Lucio Costa, of the Fundação Oscar Niemeyer and of the Fundação Roberto Marinho. He was director of the Paço Imperial from 1992 to 2014. He is a professor of the Escola Superior de Desenho Industrial (School of Industrial Design) (ESDI/UERJ) and is currently the director of the Instituto Casa Roberto Marinho, in Cosme Velho, Rio de Janeiro.

O Museu de Arte Moderna de São Paulo – The Museum of Modern Art of São Paulo
MAM is a not-for-profit public interest non-governmental organization, founded in 1948. Its collection comprises over 5 thousand works by the most distinguished names in modern and contemporary art, principally Brazilian. Both its collection and exhibitions privilege experimentalism and support plurality in global artistic production and the diversity of interests of contemporary societies.

The principal exhibitions are held in two rooms, in accordance with an annual calendar divided into four seasons. Other shows are staged regularly in the spaces of the library and the connecting corridor, where the Projeto Parede (Wall Project) installations are organized.
Every two years, MAM stages the Panorama da Arte Brasileira (Panorama of Brazilian Art), an exhibition derived from the mapping of contemporary work throughout the different regions of Brazil. The growth of interest in Brazilian art around the world has consolidated the Panorama as a major show on the international artistic circuit.
The museum also maintains a broad range of activities that include courses, seminars, lectures, performances, musical shows, video sessions and artistic practices. The content of the exhibitions and activities is accessible to the public, through audio-guides, video-guides and translation into Brazilian sign-language.

O Instituto Casa Roberto Marinho – The House of Roberto Marinho Institute
Scheduled to be inaugurated in the first half of 2018, the institute will be a cultural space focussing mainly on education and art: a Reference Centre for Modern Art and Modernism, with 600m² of exhibition space, in the midst of a charming tropical garden.
The restoration of the public face of the house will reactivate and promote culture in the neighbourhood of Cosme Velho, where it is located. Two exhibitions will be staged each year, always centred on the works and artists of the Coleção Roberto Marinho (Roberto Marinho Collection), comprising Brazilian modernist works from the 1930s and 1940s, and informal abstractionism from the 1950s and 1960s.
The collection includes works by the principal modernist painters such as Tarsila, Anita Malfatti, Di Cavalcanti, Portinari, Pancetti, Guignard, in addition to a major collection of examples of informal abstractionism by Bandeira, Iberê Camargo, Vieira da Silva, Manabu Mabe, Tomie Ohtake, among others.
Based on the collection, courses will be run on the History of Brazilian Art. The educational programme will be targeted at school and university groups, teachers and the general public.