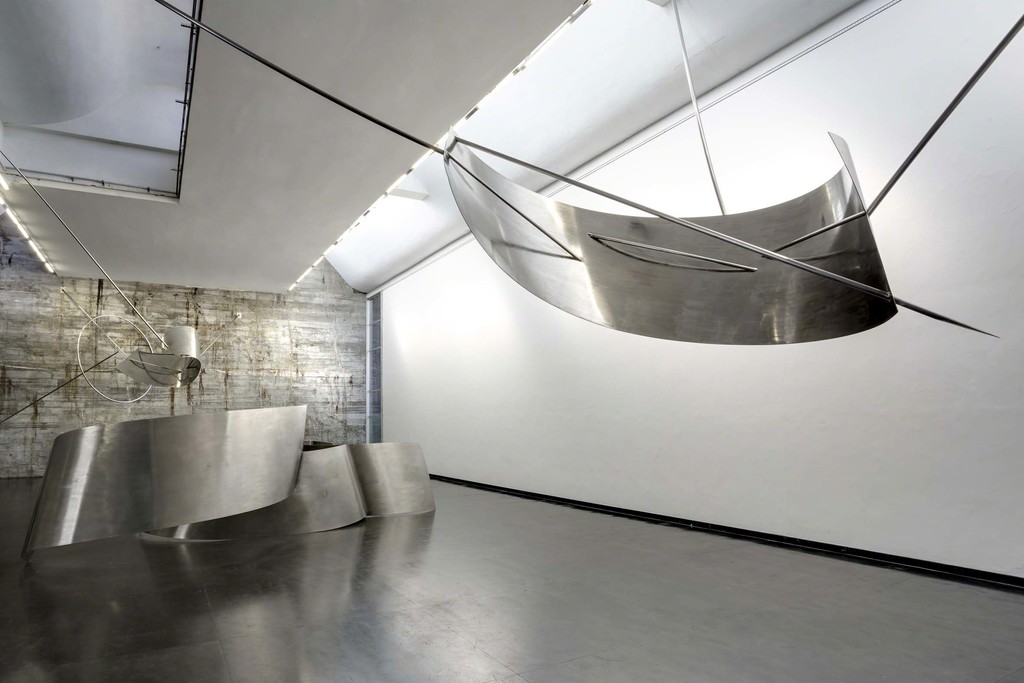 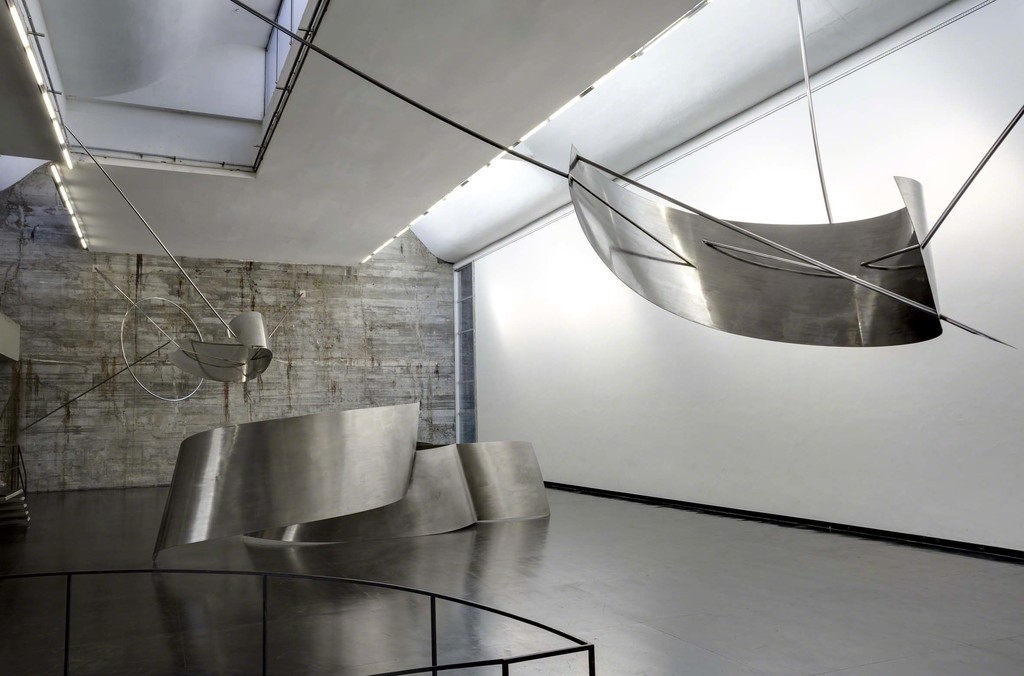 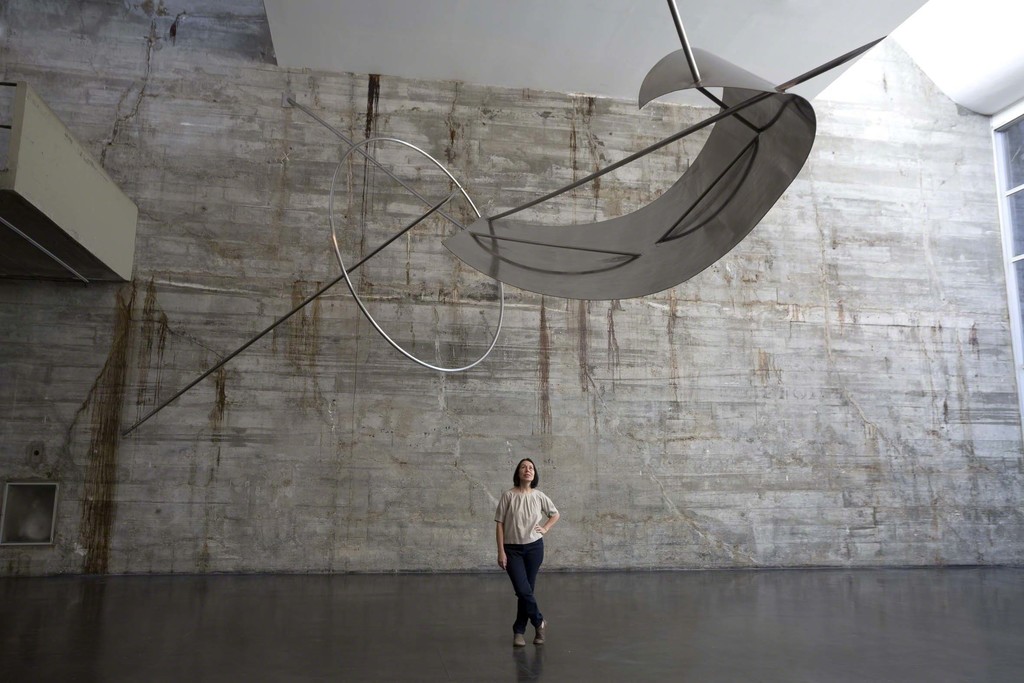 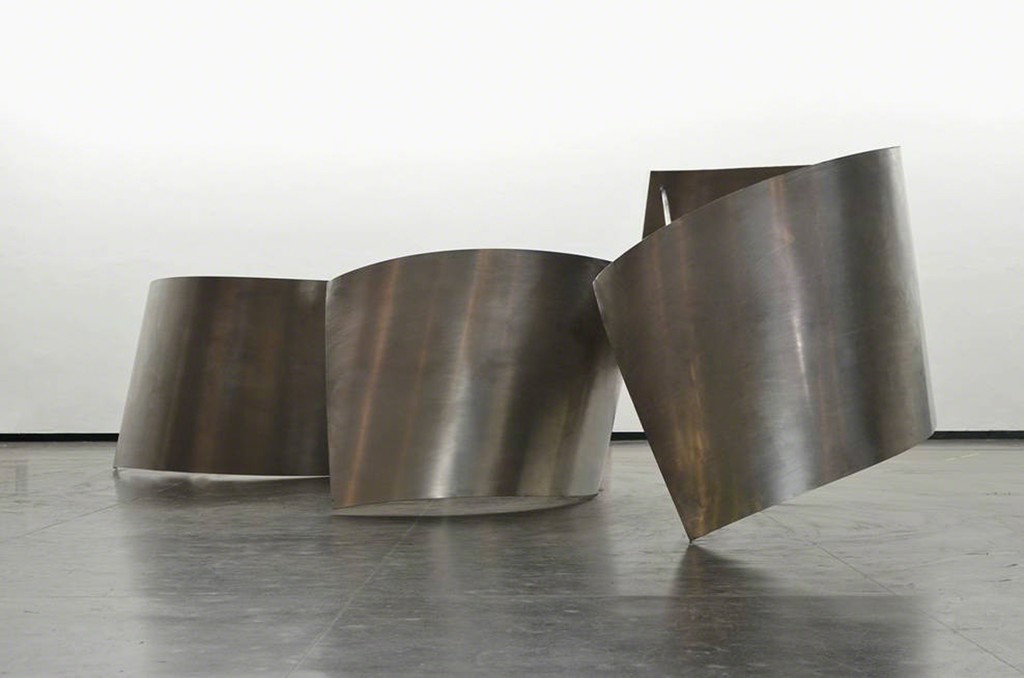 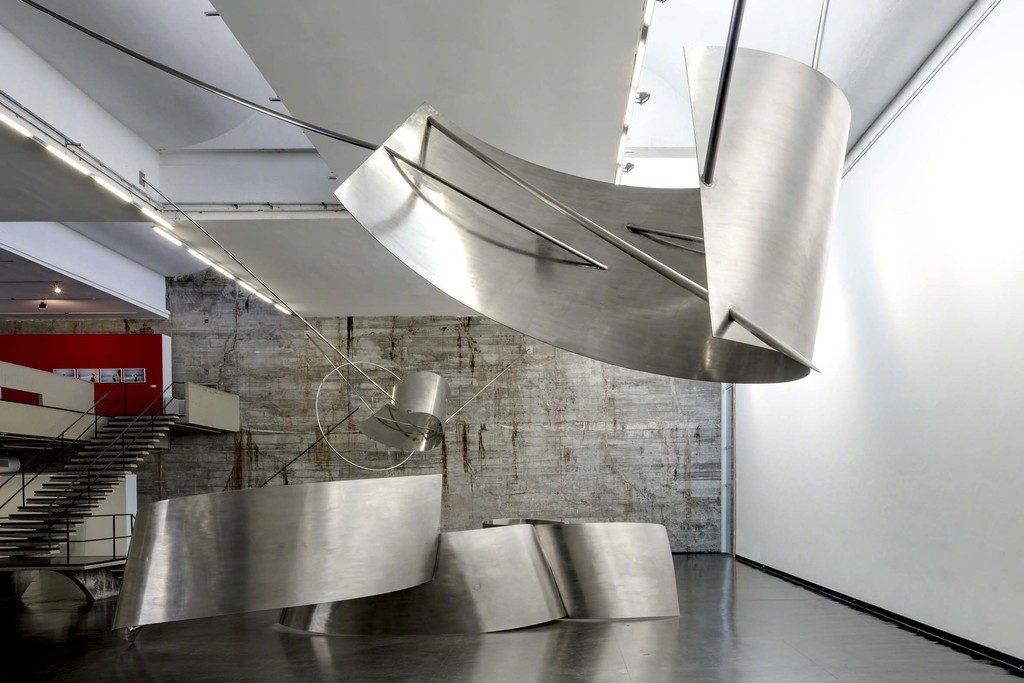 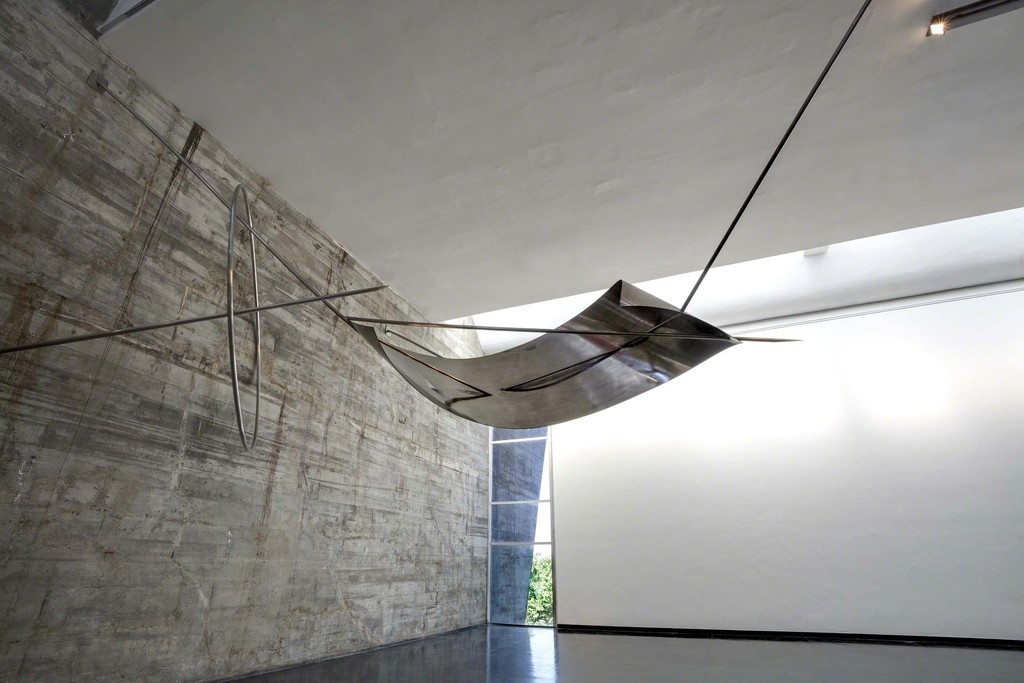 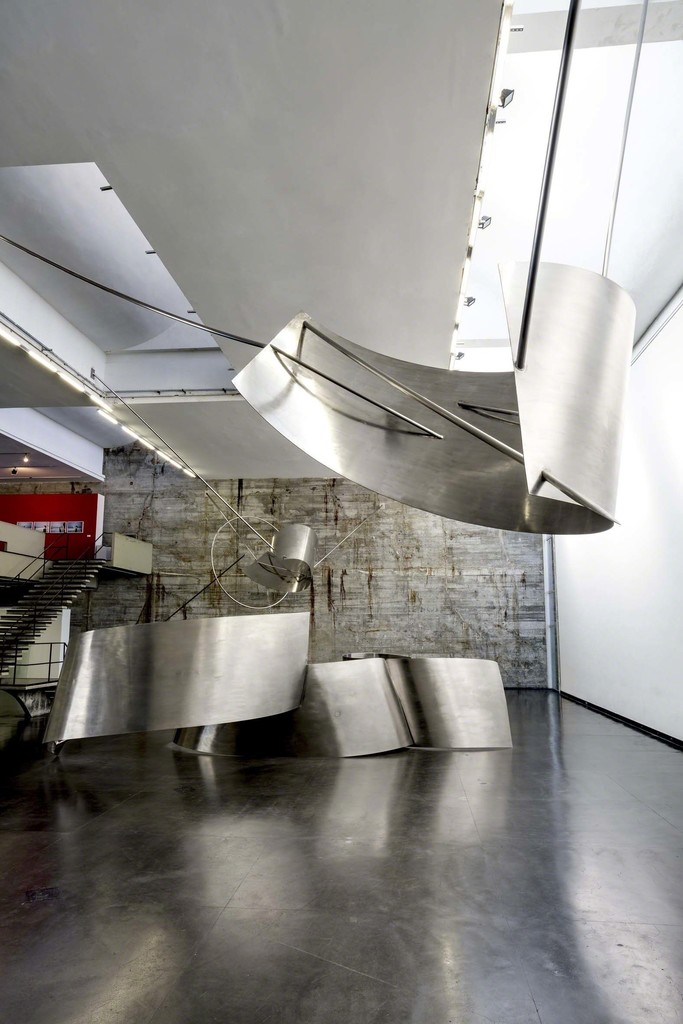 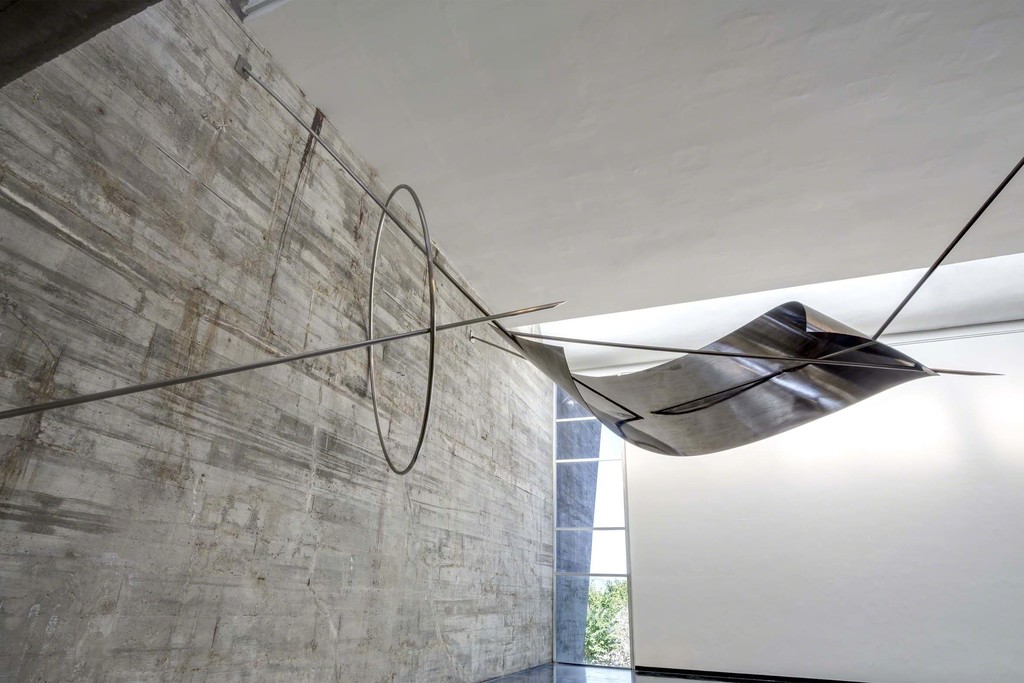 The exhibition O peso de cada um [The Weight of Each One] presents a shift from the work that Iole de Freitas had been developing up to early 2014. The polycarbonate sheets that the artist used previously have been substituted by sheets of stainless steel, which are stronger but much more difficult to bend, requiring more intense twisting and precise engineering calculations, due to the material’s weight and stiffness.

Despite the material’s specificities, however, the sculptures are suspended in the air, evolving through the space in an unfathomable ethereal dance, their original weight giving way to the idea of lightness and movement. The current pieces conserve the thin line between the gestural and the geometric, or between expressiveness and formal precision, which has always been present in this set of works, but it is now coupled with the unexpected recovery of the reflections and mirrorings that the artist used in her works during the 1970s, at the outset of her career.

From her training in the dance world, Iole de Freitas retained the value of the displacements and elasticity that the corporal gestures activate in space, along with the simultaneously precise and voluble nature of the intercrossings between the forms and the environment. The artist’s choice of materials was therefore conceptually consistent with the works, insofar as their moldable, transparent or immaterial qualities lent them an ethereal and fleeting nature.

The present use of the strong stainless steel sheets therefore poses a challenge for the artwork’s reasoning, demanding new formal arrangements, a greater expenditure of forces for the maintenance of their balance, tensions between the sculpture and the place it is shown, preciseness in the work’s rhythmic and kinematic questions, together with a more emphatic clashing between the piece’s lyrical and structural aspects.

The duality between mirroring and opaqueness – qualities that alternate along the surface of the sheets – describe a body that is simultaneously rigid and fluid, sometimes integrating and absorbing the external reality, sometimes affirmed as a concrete substance and visual limit. The sculptures’ previous aspect of spatial mobility has thus been complemented by a further sign of their perceptive volatility.

Consequently, her work continuously instates an ambiguous field, which hovers between the classical style and the pre-Romantic enlightenment spirit, between a rational investigation and lyrical exuberance, with a freedom that comes hand-in-hand with the demands of a method.