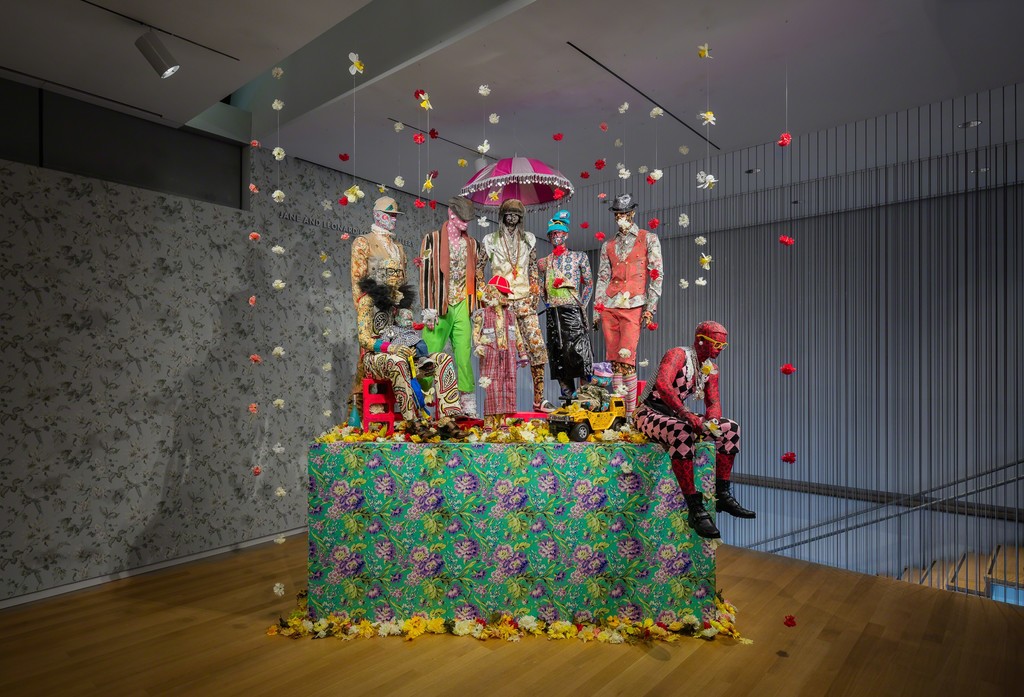 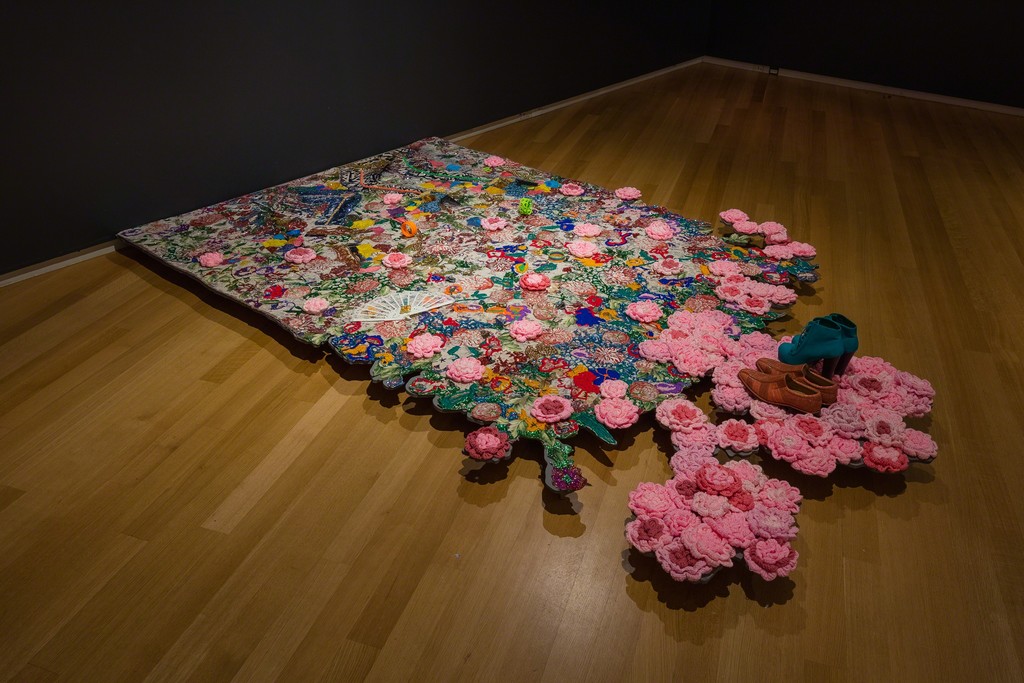 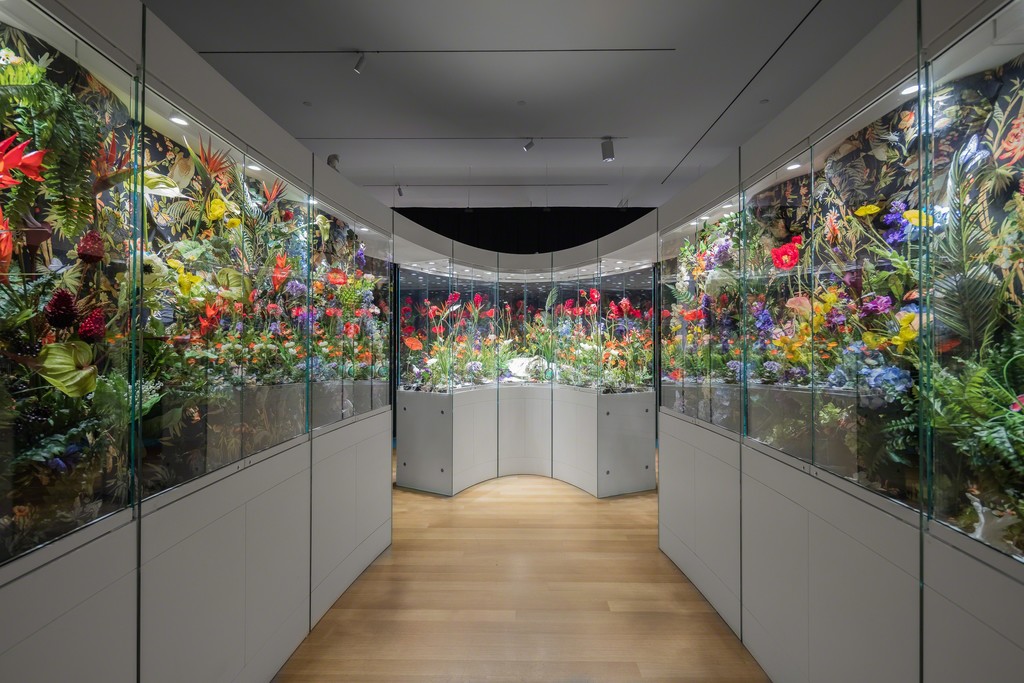 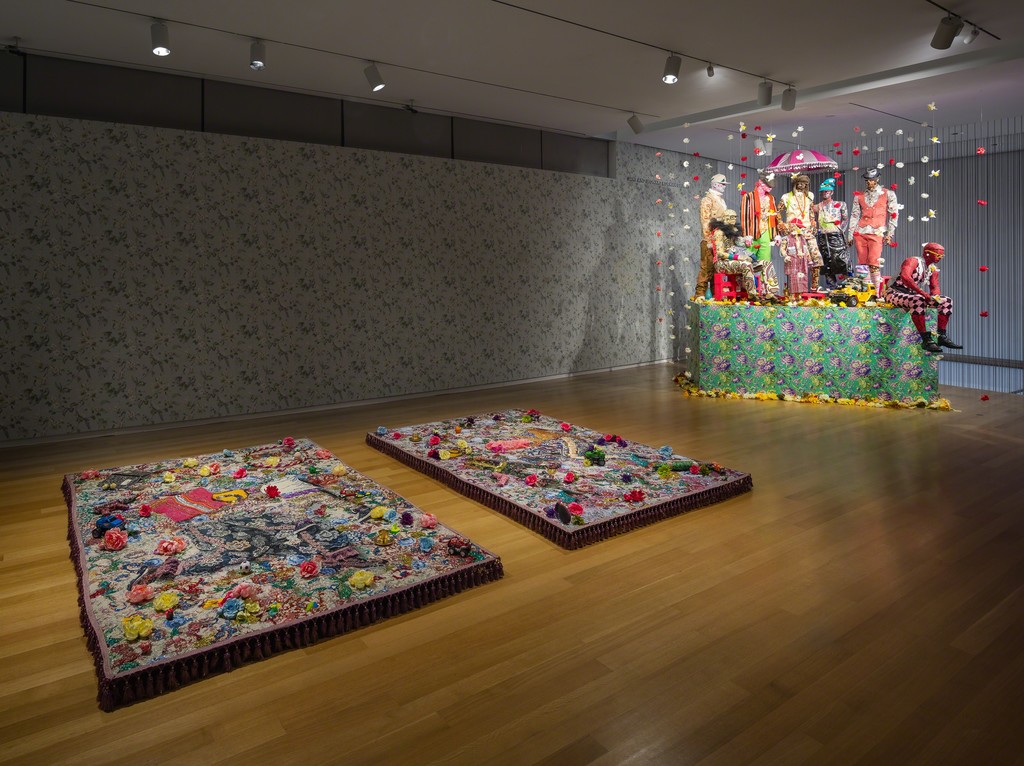 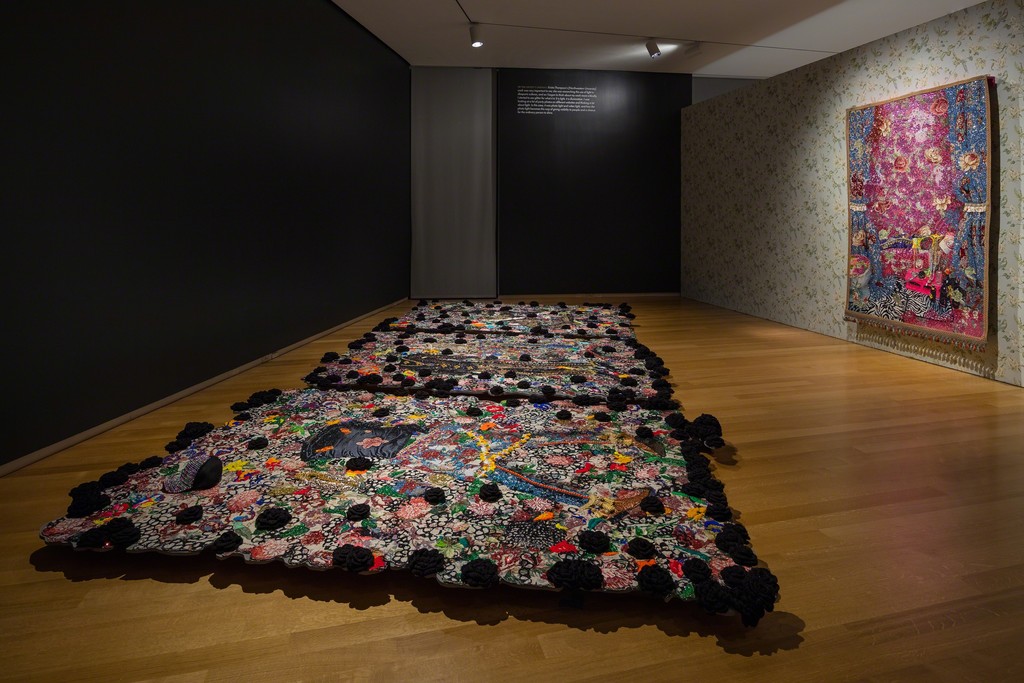 "Ebony Patterson is an outstanding example of an artist who is working in materials and methodologies once associated purely with craft and material culture and is deploying them in smart and critical ways," stated MAD's William and Mildred Lasdon Chief Curator, Shannon R. Stratton. "Patterson is a master of collage. In all three aspects of her exhibition at MAD—the mannequins, the tapestries, and the Tiffany Gallery installation—you witness an artist who is challenging the possibility of what collage is, dimensionally and conceptually. I couldn't be more excited that we were able to bring Patterson to the museum and give her the platform she deserves at this pivotal point in her career."

For Dead Treez, Patterson assembled five eye-popping tapestries, along with a life-size figural tableau of 10 male mannequins, dressed in a kaleidoscopic mix of floral fabrics, entitled Swag Swag Krew (2011–2014). A meditation on dancehall fashion and culture among the disenfranchised in postcolonial Jamaica, Swag Swag Krew explores the paradoxical relationship between traditional gender codes and the bombastic aesthetics of dancehall pageantry. While clothing is often used to define and exemplify gender, Patterson camouflages the body with textiles, revealing gestures and postures often associated with machismo. Patterning the body also serves as a reference to the popularity of skin bleaching and tattooing. Patterson suggests that skin alteration is more than embellishment; it is an erasure motivated by a desire for presence.

For the series of five tapestries, Patterson borrowed the flamboyant aspects of dancehall dress to draw attention to murder victims whose images she sourced via social media. Inspired by these found images, Patterson stages photo tableaus that she has woven into jacquard tapestries. Using those tapestries as a substrate, Patterson then embroiders, beads, and otherwise adorns the surface, working into and building up the images to create a visually seductive appearance that draws the viewer into bearing witness to the underreported and unacknowledged brutality experienced by those living on the lower rungs of the socioeconomic ladder.

…buried again to carry on growing…

In MAD's Tiffany Jewelry Gallery, Patterson was invited to continue MAD's new POV series. She created …buried again to carry on growing…,an installation of selections from the permanent jewelry collection that reflects the perspective of her own studio practice.

Inspired by the Alnwick Garden's "Poison Garden" in Northumberland, England, Patterson's garden in the Tiffany Gallery presents a curated variety of dangerous flora and fauna to populate a landscape where camouflaged and patterned bodies commingle with bold and extraordinary selections from the jewelry collection.

Using the jewelry cases as terraria, Patterson turns the gallery into a sculptural installation consisting of three scenarios in which bodies and body parts, like the ones seen in Dead Treez, evoke the violence often endemic to marginalized communities. The jewelry selection is incorporated into the landscape, positioned to appear as though the pieces could belong to the bodies that are disappearing in the underbrush.

Patterson's work addresses how choices in clothing, jewelry, or other forms of personal adornment are endeavors to be visible on the part of populations rendered invisible by poverty, racism, and other oppressive socioeconomic conditions. Impoverished, inner-city communities in Jamaica often have the word "garden" in their names. Patterson's installation accentuates this contrast between places designed to be about beauty, growth, and life and the hardships and sorrow that are daily obstacles in neighborhoods that use the same name. In foregrounding this contradiction, Patterson raises urgent questions about what is at stake for people to blossom and thrive despite adversity.

Patterson's curated installation of jewelry drawn from MAD's collection is the second in the series POV, a project that invites guests' perspectives on the Museum's permanent collection through the lens of their own work.

The title …buried again to carry on growing… is inspired by the poem "Brief Lives" by Jamaican poet and author Olive Senior.