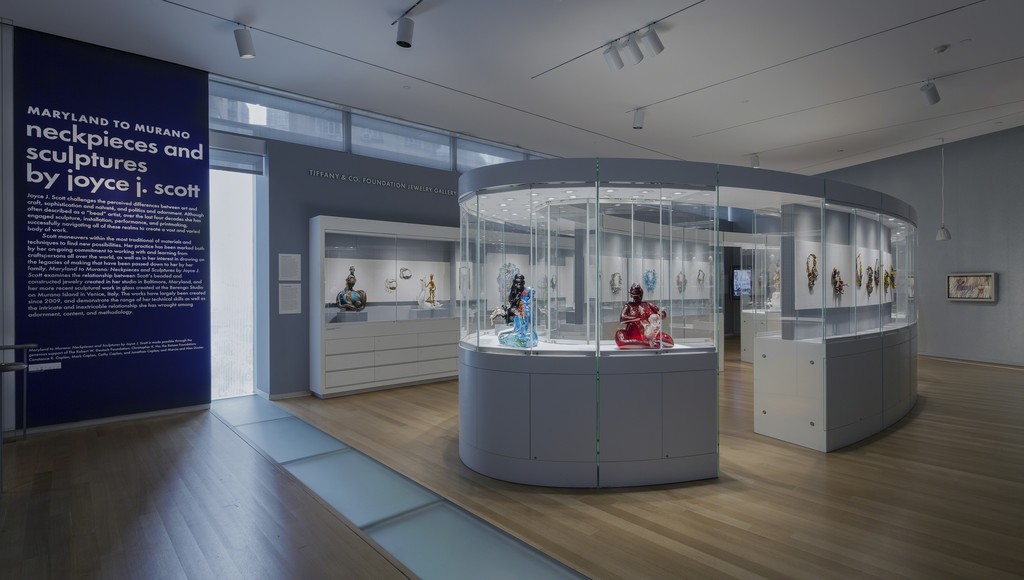 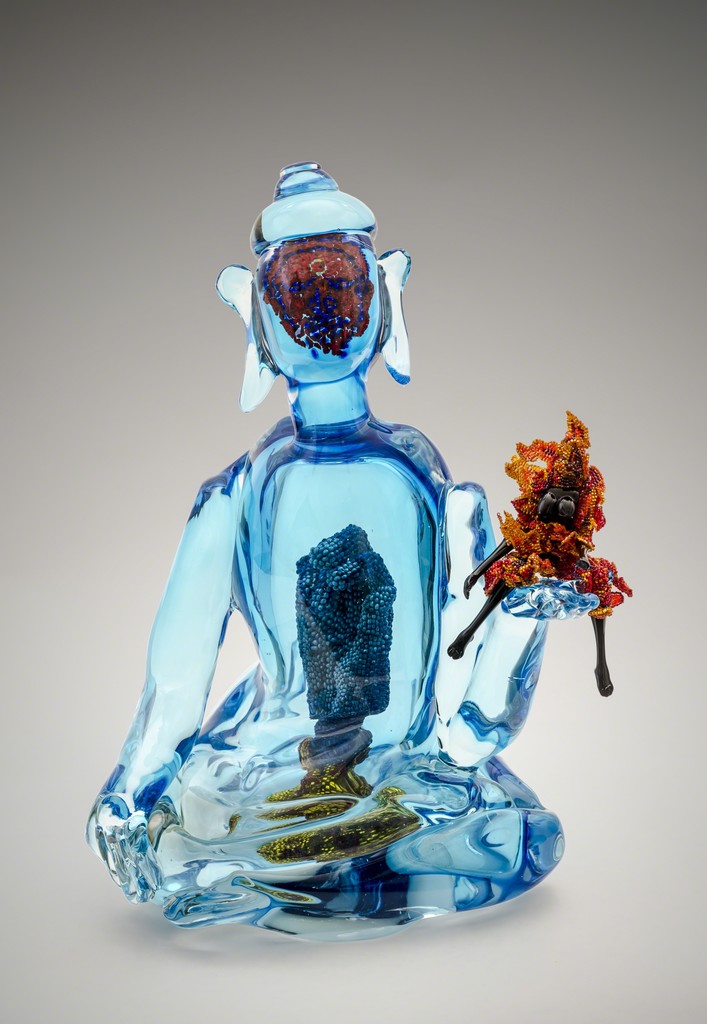 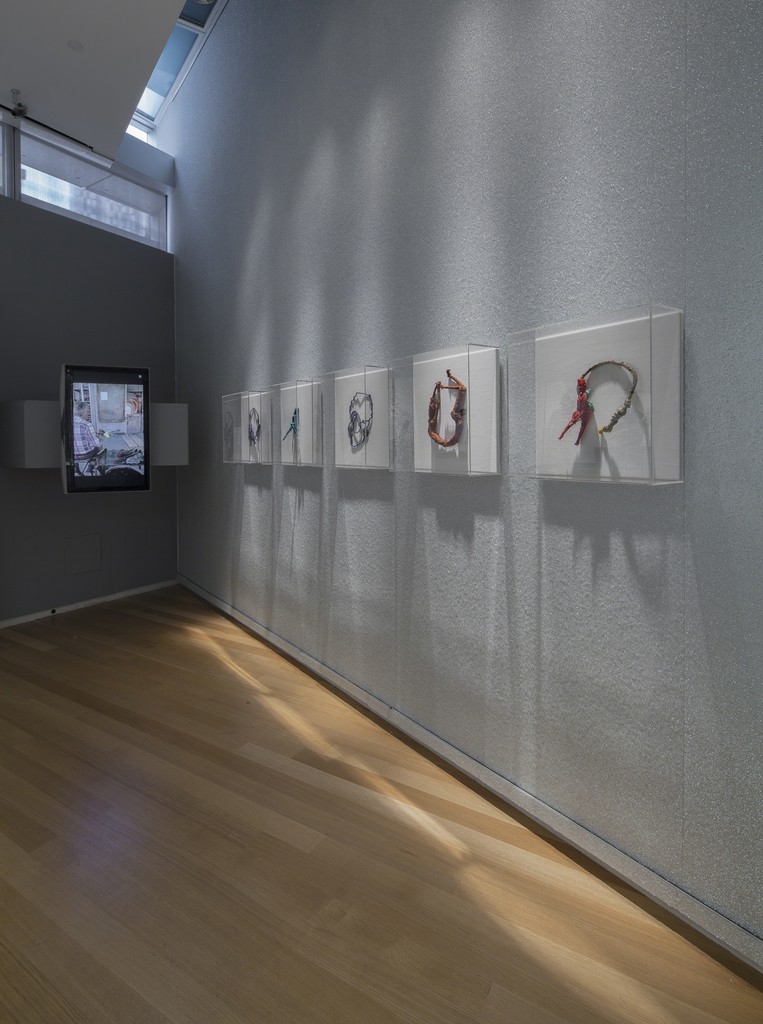 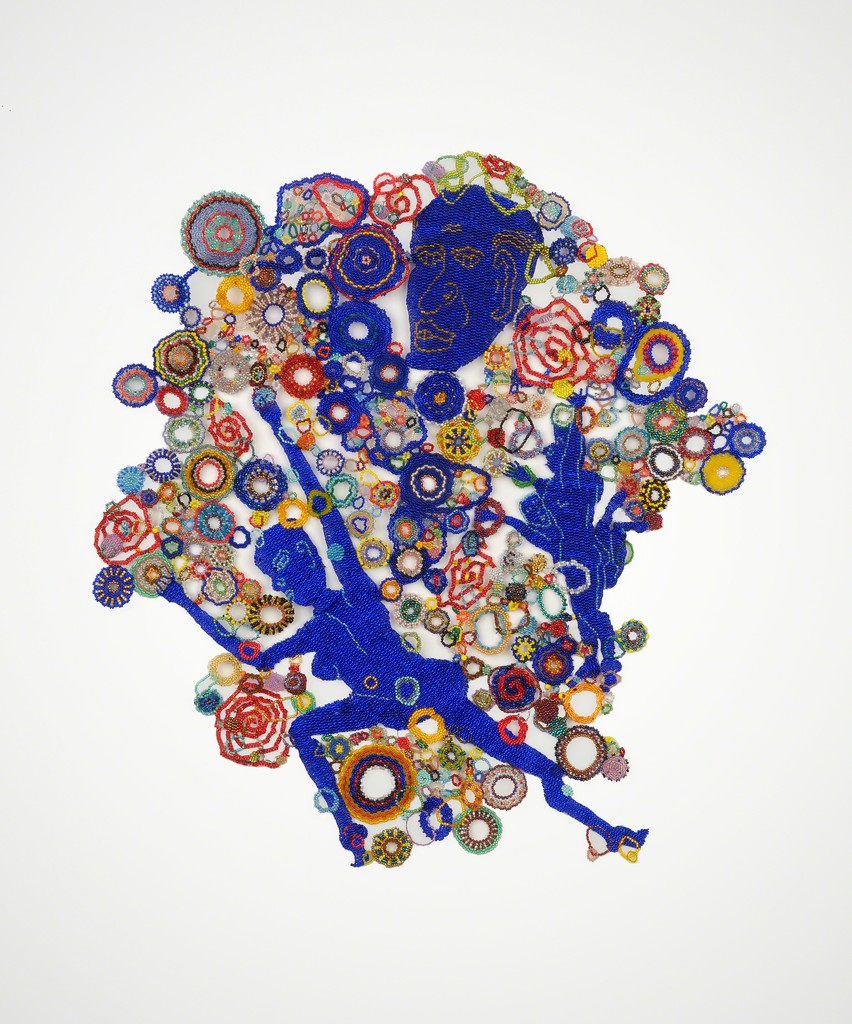 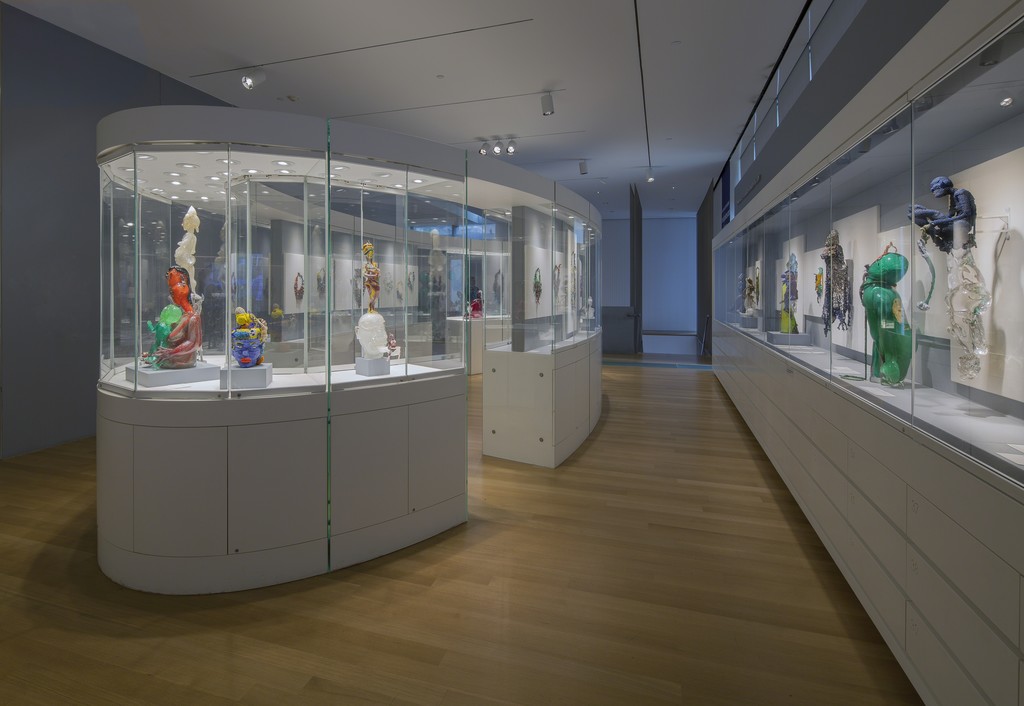 Museum of Arts and Design (MAD) presents Maryland to Murano: Neckpieces and Sculptures by Joyce J. Scott, the first exhibition to examine the relationship between Scott’s beaded and constructed neckpieces created in her Baltimore, Maryland studio and her more recent blown glass sculptures crafted in the Berengo Studio on Murano Island in Venice, Italy. On view from September 30, 2014 to March 15, 2015, this exhibition demonstrates the interplay between these two bodies of work and reveals the range of Scott’s technique and skill as well as the complex relationship she has shaped among adornment, content, and methodology.

Organized by Lowery Stokes Sims, MAD’s William and Mildred Lasdon Chief Curator, the exhibition features 34 of Scott’s neckpieces, including a collaboration with noted jeweler Art Smith, 3 beaded wall hangings, and 13 glass sculptures, most of which were created since 2009. A press preview and walkthrough for the exhibition will be held on Monday, October 6, 2014 at 2:00 pm.

“Over the last four decades, Scott has honed her craft and delivered striking visual narratives through masterful technical skill, while demonstrating an ongoing interest in collaborating with craftspeople across the globe,” says Glenn Adamson, MAD’s Nanette L. Laitman Director. “Maryland to Murano indicates the Museum’s commitment to presenting jewelry as an innovative art form and to examining how the medium is continually expanding.”

Born in Baltimore in 1948, Scott has lived, studied, and worked in Maryland all her life. Challenging perceived dichotomies between art and craft, sophistication and naïveté, and politics and adornment, Scott has succeeded in incorporating these elements within a vast and varied body of work including installation, printmaking, apparel, sculpture, and jewelry, the last of which has garnered her the widest audience and recognition. In Scott’s hands, human adornment becomes a vehicle for social commentary and a means for confronting contentious issues affecting contemporary society. Navigating controversial themes including hunger, rape, and racial stereotypes, Scott’s jewelry transcends the typical function of adornment and embellishment.

“Joyce Scott has maneuvered within the most traditional of materials and techniques to create a body of work of great expressive potential,” says Stokes Sims. “She has positioned herself within the context of the art world in such a way that the viability of her materials and the place where she creates is widely recognized and celebrated.”

The exhibition focuses on a range of Scott’s signature neckpieces that reveal the rich diversity of her style and methodology. Indicative of the influences of her global travels to study theater with Japanese masters as well as textile design and beadwork with Native American practitioners, featured works are grounded in the use of ancient bead-weaving techniques including peyote stitching. As a result, Scott’s wearable works maintain a strong sculptural quality while achieving a variety of physical and visual effects within a single neckpiece. Creative legacies passed down to Scott from her family, notably her mother Elizabeth Talford Scott, a well-known quilter and textile artist, are also acknowledged in the neckpieces. Building upon these influences, Scott incorporates memorabilia including charms, ex-votos, and bits of recycled jewelry to evoke personal narratives and aggregated memories.

Seen as a natural evolution from Scott’s constructed neckpieces, the featured glass works are the result of a two-year collaboration with craftspersons in the Berengo Studio on Murano Island in Venice, Italy. Both technical and conceptual in nature, this collaboration with the Murano-based studio, widely celebrated for pushing the medium of glass into the realm of contemporary art, allowed for Scott to further expand and develop skills present throughout her career. These recent works incorporate the intricately beaded elements present within her neckpieces into blown glass, and demonstrate her unique method of constructing three-dimensional, beaded forms without the use of armatures—a skill that allows Scott to create large, freestanding figures, some of which reach the scale of full-size installations.

Highlights from the exhibition include the following works:

The three sculptures in Buddha Series (2013) are multi-figural compositions that allude to the four elements—earth, fire, water, and wind. Each work combines blown glass renderings of Buddha besieged by earthly beaded figures. The resulting experience is as powerfully metaphysical as it is technically astounding.
One of Scott’s most recent neckpieces, Rain (2014), is a proliferation of turquoise curlicues, tendrils, and twists, intermingled with disembodied yet active figures. Having been detached and reworked from one of Scott’s sculptural glass busts, this piece is a prime example of the connection between her bodies of work.
Virgin of Guadalupe (2009) depicts a motley parade of devils, skeletons, and devotees alongside the Virgin Mary. This beaded neckpiece defies compositional logic as the figures pile onto one another.
Cobalt, Yellow Circles (2010) is one of three featured examples of Scott’s intricately beaded wall hangings that exist outside the functional associations of her wearable neckpieces. In this work, a web of colorful circles intertwines with figures to create a visually complex narrative scheme.
Dizzy Girl (2014), a freestanding sculptural bust that exemplifies Scott’s use of traditional Italian glass bead blowing techniques including latticinio and zanfirico, by which patterns of color are extruded through a glass matrix to create internal color variants.
Eve Became the Apple, Serpent Impressed Swallowed Adam is a volumetric work that demonstrates Scott’s repurposing of the ancient peyote stitch and ability to construct glass beaded forms without the use of armatures.
Demonstrating Scott’s skillful combination of beadwork and blown glass, Lewd #1 (2013) is a tour de force of glassblowing techniques and salacious nuances. A beaded imp torments the glass female figure to create a vignette rife with sexual tension.
Encompassing sentiments of distress and disorientation, Water Mammy I (2012) reflects Scott’s time with craftspersons from the Berengo studio and the often unexpected results that their conceptual and technical collaboration yielded. This compositionally dynamic work is part of the Museum’s permanent collection.