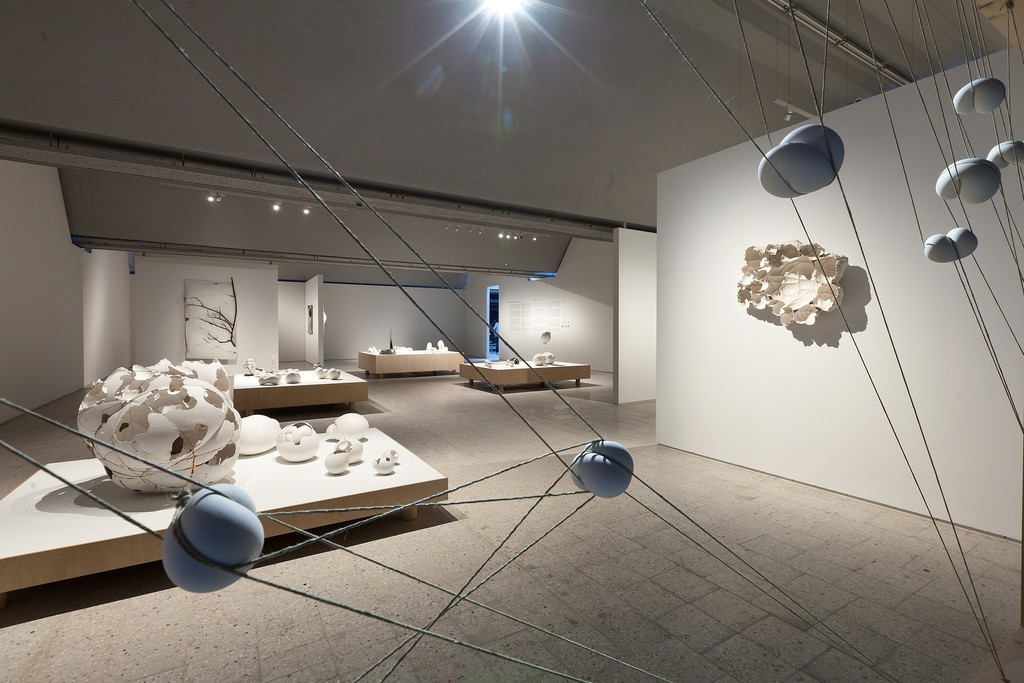 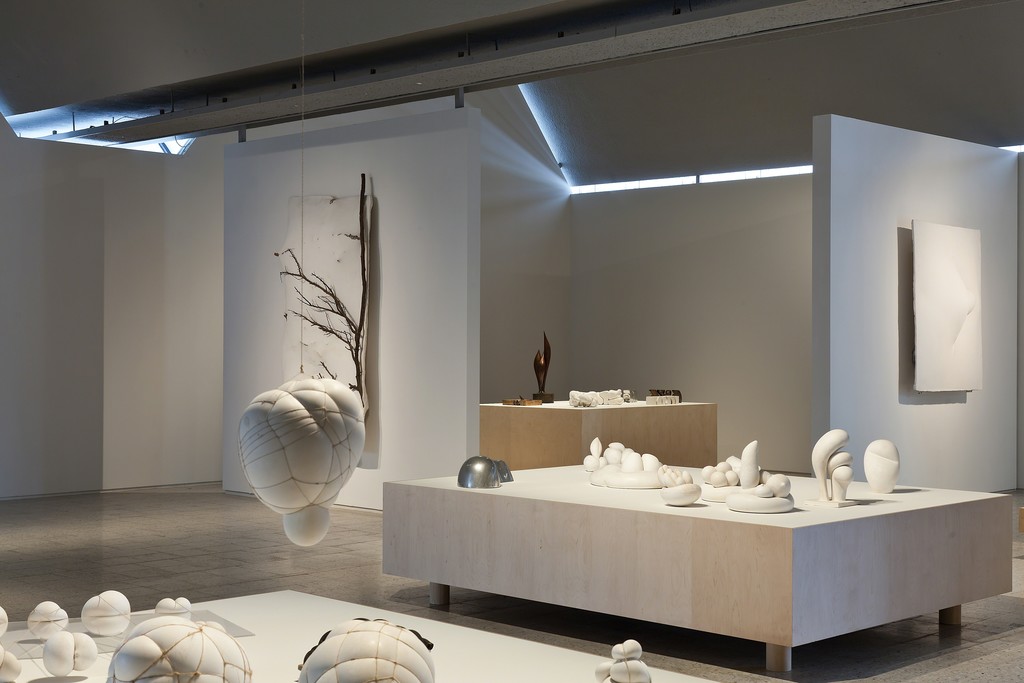 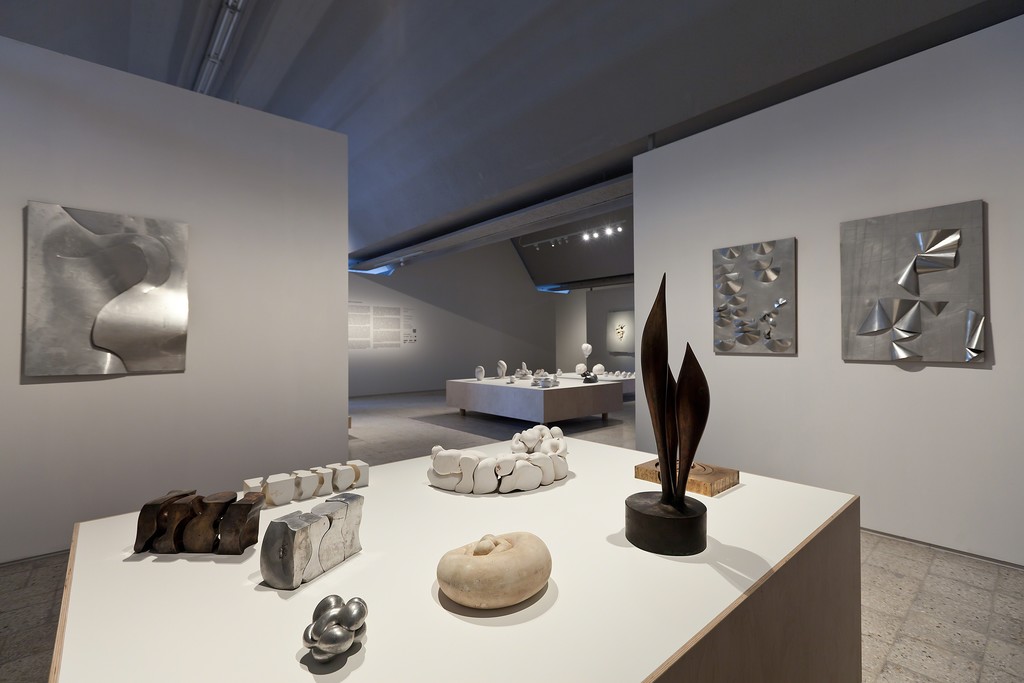 Maria Bartuszová (1936–1996) has been, so far, a little known Slovak sculptor, revealed to the general public in 2007 during Documenta 12 in Kassel – since then, her works have begun to appear occasionally in international exhibitions and some of them have found their way into prestigious collections of contemporary art. Bartuszová’s art has not, however, yet achieved true recognition: her works have been exhibited individually, without a broader context and with no reference to the broader dynamics of her work.

The exhibition “Maria Bartuszová: Provisional Forms” is an attempt to write a history that has never been written. Neither has it ever been conveyed in any coherent way, whereas this work is built on a dense mesh of incredibly potent and dynamic references, reversions and unexpected new departures – a record of hesitation and the search for a new language.

Originally from Prague, after graduating in 1961, Bartuszová, together with her husband, also an artist, moved to Košice, a backwater far away from the world of art. Innumerable group exhibitions, casual membership of ‘Concretists’ Club’ and a few public projects were the sum total of her official artistic life. Under such circumstances, artistic experiments would seem quite a challenge. And yet, against all odds, Bartuszová’s works exude power and the will to overcome: her oeuvre consists of some 400 works - a lasting (in spite of their extreme fragility) testimony to her extraordinary struggles and formal experiments.

The majority of the artist’s works are made in plaster – a material by nature preparatory and impermanent. For this reason alone, despite their perfect shape, her sculptures are, as it were by design, tentative, unfinished, transitory and provisional. They connote mobility and hesitation – a hypothesis rather than a conclusion. On the occasions when Bartuszová succumbed to the temptations of using bronze or aluminium, she would immediately undermine, through either form or subject matter, their material weight: softening the material, putting it in motion, altering
its proportions and mocking gravity. Her material of choice, however, appears to have been plaster (which was cheap) and it was plaster that was to become not only the material of her art but also – through its inherent impermanence and transitory nature – its core message.

The artist’s early works were inspired by natural processes. These sculptures don’t appear to have been created; rather, they emerge and take shape as if a result of the pressure of gravity, the weight of water or wind or due to having emerged from under melting snow. These works appear not to have been created for art galleries but, instead, in order to become part of the landscape or a natural process. She employs also multiplication of form which is not only the way to invest it with a ‘sign of life’ – as an organic flow of one form into another – but a game as well, playing „with” and „through” sculpture.

From the 1980s, her work was dominated by pure, ovoid forms, hollowed eggs and shells, whose perfect shapes were subjected to deformation – crushing, squeezing, breaking, tying and considerable squashing. This gesture of touching and imprinting transforms into gestures even more radical than squeezing: those of cutting, stabbing, piercing or tearing. And so, even though Maria Bartuszová created exclusively abstract forms – unusually sparse or even minimalistic in expression – her art sizzles not only with violence but also eroticism, the intuition of damnation and the hope of memory, a deep reflection on the origin of life.

In the final phase of her creativity (thus in the works produced since the mid-1980s) Maria Bartuszová began to employ a singular method of obtaining plaster casts by means of her signature technique, called ‘pneumatic shaping’. The cast was produced with elastic rubber balloons over which she poured concrete. The touched swaps places with the person touching, and the balloons, weighted with the quickly crumbling mass, burst under its pressure. The resulting objects – one can hardly refer to their having been ‘created’ – are the negatives of the presence of the destroyed positives. These works, that look like abandoned cocoons, traces of past presence, now-defunct shells, began from the late 1980s to fill up and overgrow Bartuszová’s studio and, later, also her garden. At the same time, the material employed continued to be plaster; exposed to the wind and rain, it would last only a brief while.

The exhibition “Maria Bartuszová: Provisional Forms” sets out to capture the tensions in the artist’s works. Rather than thematising the collection of objects, the exhibition will focus on the moment at which the artist – driven by an inner impulse – invents a new language. Working with plaster – a material which, from a sculptor’s point of view, is both primitive and common, Bartuszová experimented with it and did not hesitate to treat tradition, accepted norms and learnt techniques as merely transitory and provisional. The fact that her art happens in parallel
with the paradigm shift of the time that transformed the status quo makes this art – however peripheral, isolated and indeed forgotten – epitomise the spirit of the time and the nascent new idiom of contemporary art.