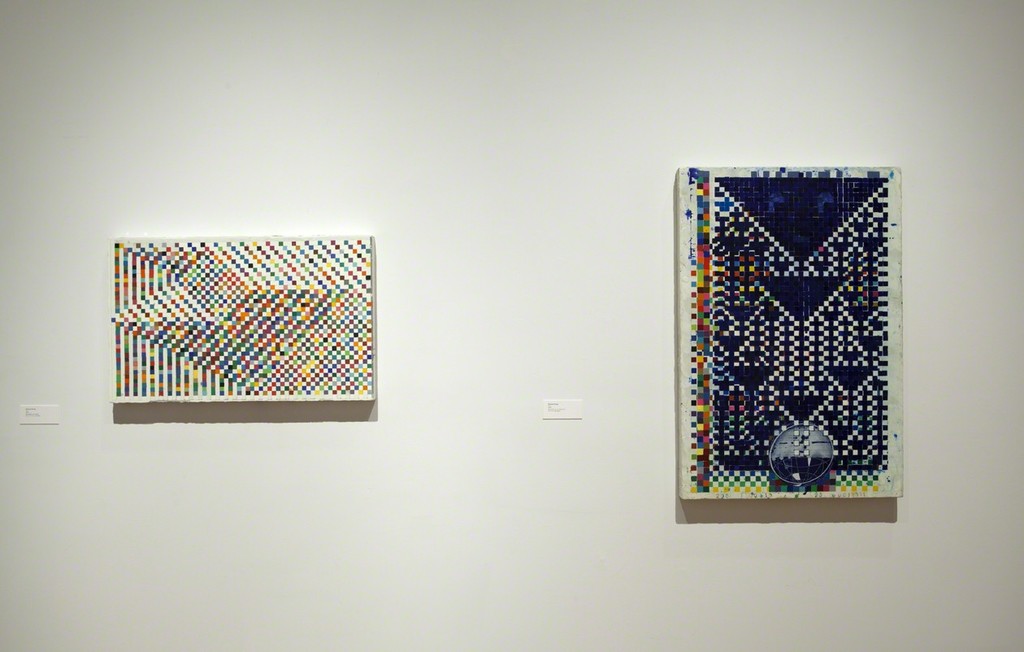 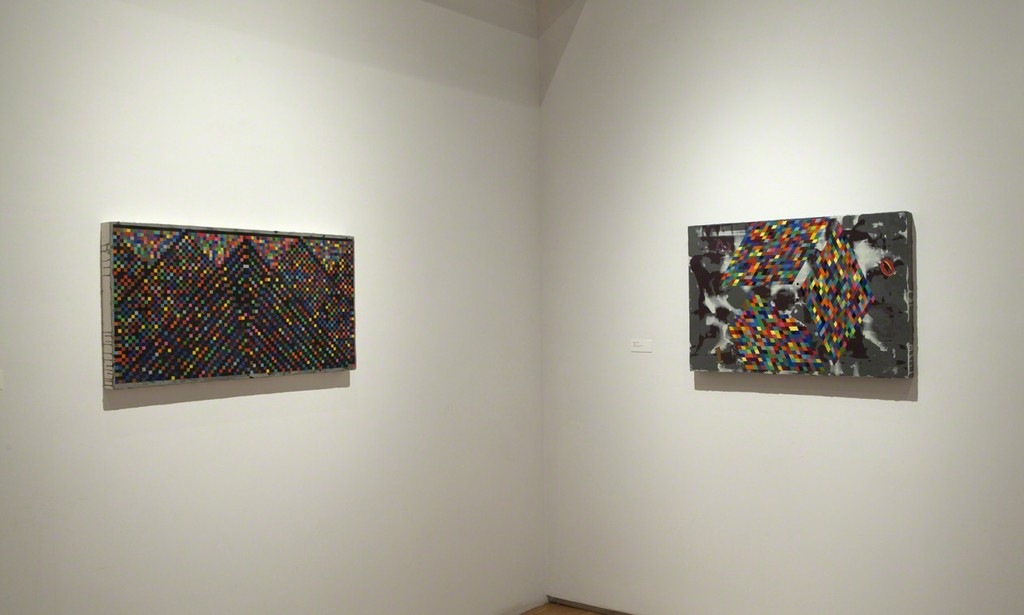 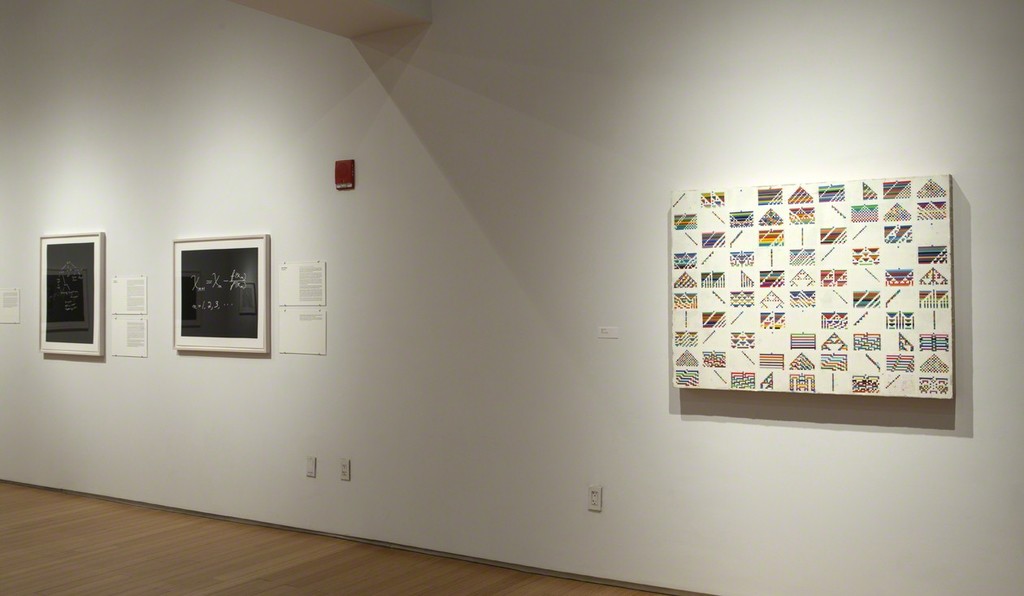 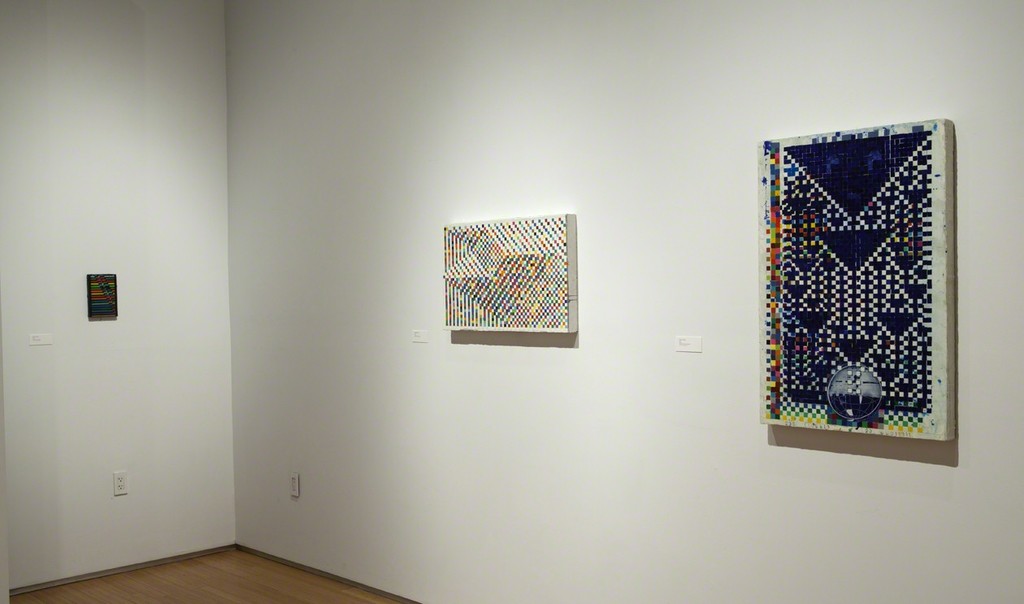 It has been over ten years since Richard Purdy’s last show. From December 17, 2015 through January 23, 2016, his wax encaustic paintings, based on Stephen Wolfram’s book, “A New Kind of Science,” will be on view. Purdy utilizes a simple mathematical formula to create his compositions, based in Wolfram’s cellular automata. Rather than fill the squares in his grid with numbers (a la Wolfram) Purdy fills his with a dazzling array of color.

Purdy writes of his experience:

“My initial encounter with Stephen Wolfram’s work on cellular automatons in “A New Kind of Science” (2000) entirely changed the course of my artwork. He describes cellular automatons as “a collection of colored cells on a grid of specific shapes that evolves though a number of discrete time steps according to a set of rules based on the states of neighboring cells. The rules are then applied iteratively for as many time steps as desired.

“Captivated by the graphics but unable to decipher the equations, I spent months studying his cellular automata formations, attempting to understand the mechanics, eventually translating the chain of logical steps into working code. It couldn’t have been more fascinating. The thrill of the first keystroke that produced a successful result was indescribable. That today many junior high school age programmers could easily do a better job of it emphasizes my outsider status when trying to enter that world. I took no offense when examples submitted to Wolfram’s organization drew the dry response that my code was wrong. That I still don’t feel I’ve deeply understood Wolfram’s formulas doesn’t detract from the outcome; in fact, the variants produced by the “noise” in my code have opened doors of their own.

Linking this exhibition to the artist’s last, is his use of “signature materials,” wax encaustic, pigment, wood panels. While based in science, these paintings are visually arresting; they require no knowledge of the theory the artist uses to create the compositions. All of Purdy’s works are titled simply with a number, which indicates how the artist programmed the “pattern” of the painting.

“Purdy generates his compositions on a computer, using a simple mathematical formula of his own devising, which fills the boxes with colors rather than numbers. Painting by hand in encaustic, he then transfers a printout of each complete pattern, which fills the entire grid, to a wood panel. What arises is what cellular automata inherently generate—an enormously complex pattern, created by the application of a remarkably simple equation.

“The patterns, made visible, are revealed to be breathtakingly beautiful—and it
is beauty with a meaning. In the complex balance of the works, in the variety of disposition of the color displays, you can see exactly what is at hand; you witness both the regularity of the law the computer has followed and the astonishment of the unexpected results when that law is put into play. You see the point of the theory of cellular automata: not as a theoretical construct legible only to specialists, but as an idea put into action, as a thought made real, as a concept turned to life. You see not what the idea is but what the idea means—what difference it makes when, through art, it is carried into the world.”