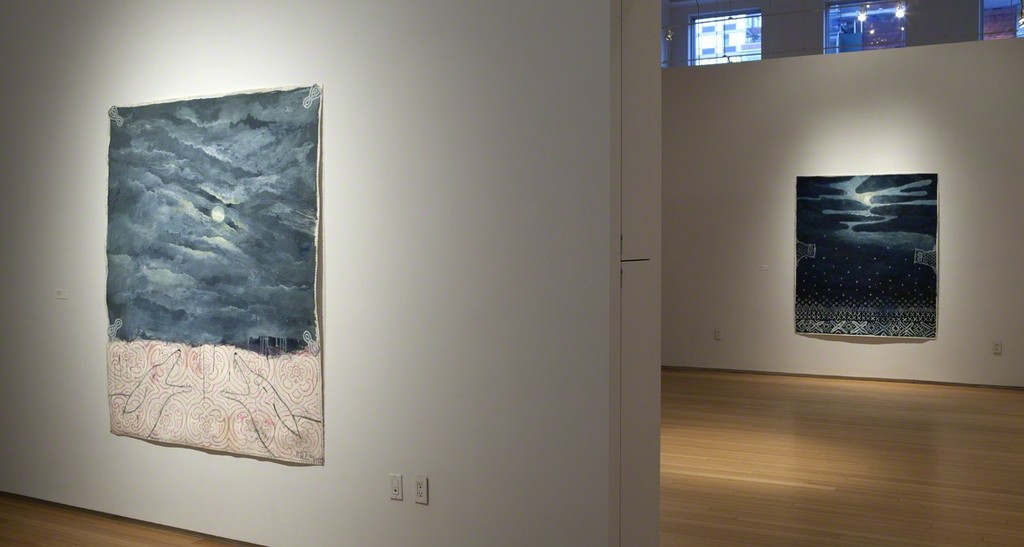 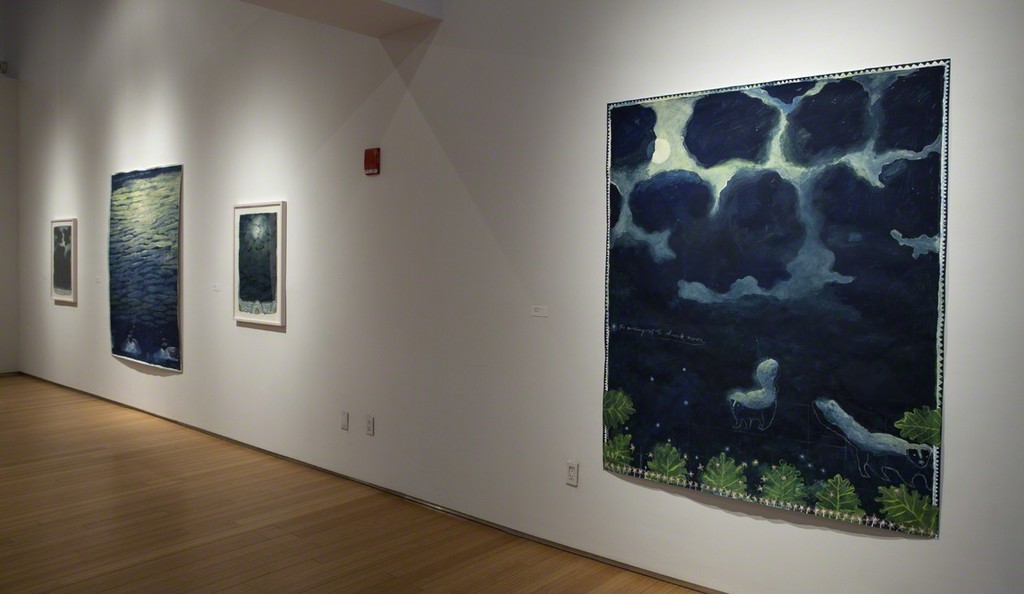 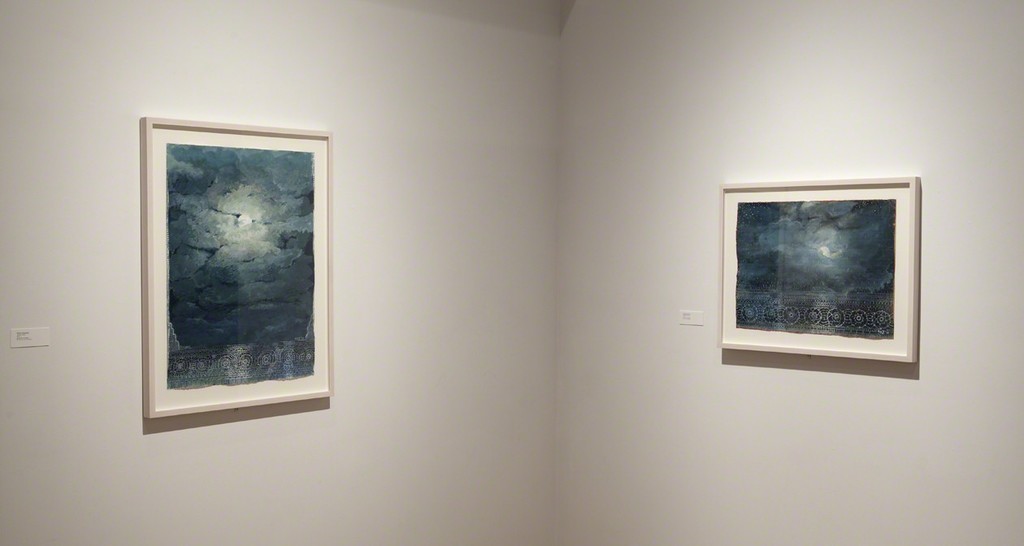 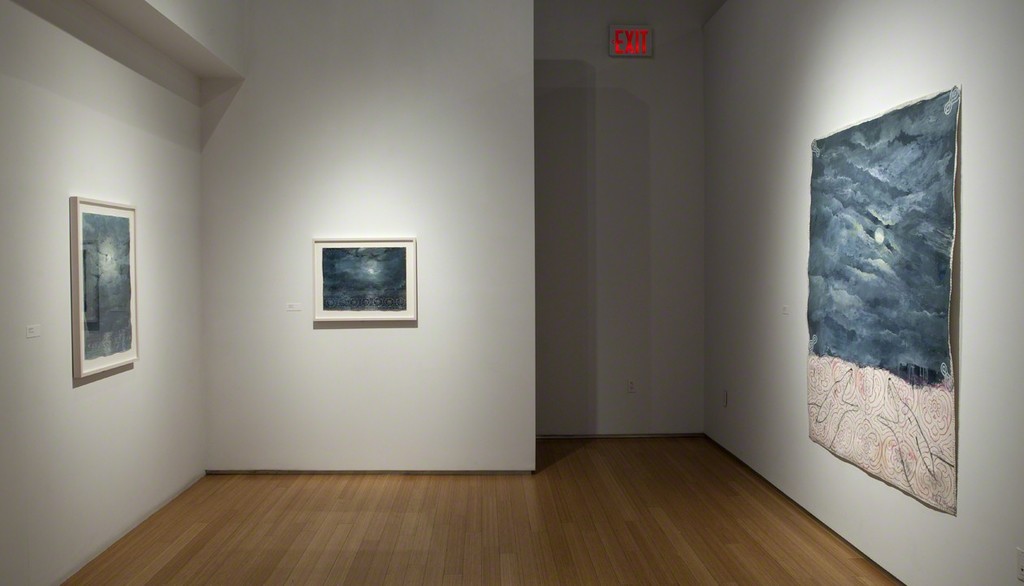  Robert Zakanitch at Nancy Hoffman Gallery “In the Garden of the Moon” January 28--March 5, 2016
On January 28, an exhibition of new work by Robert Zakanitch opens at Nancy Hoffman Gallery. Entitled “In the Garden of the Moon,” the show includes large and small gouache paintings on paper, inspired by the magic and romance of the night. The show continues through March 5, and is a celebration of the Pomegranate publication “Robert Rahway Zakanitch,” the first monograph on the artist, tracing his evolution from the ‘70s as the strongest voice in the Pattern and Decoration movement, to the work of today. A book signing event will be held at the gallery on January 28 from 6 to 8.
Zakanitch writes:
“I want to bring romance back into painting, and in this series the timeless enchantment of the moon and the night. Night vividly reveals the immensity, that we are all part of, with stars, galaxies, and universes flowing flawlessly--all inter-related.”
Following his lush “Hanging Gardens” series inspired by the gardens of Babylon, Zakanitch embarked on an entirely new body of work. During the three years he painted the “hanging gardens,” the artist moved from his long-term Brooklyn home and studio to Yonkers, where he now lives facing a garden with a view of the night sky, stars, and moon. Nature is at his front door and permeates his home and studio. A floor to ceiling studio window is filled with light in the day facing the Phillipse Manor garden, and filled with the mysteries of the night as the sun sets and darkness descends over the town. These are not “representational” paintings of the night; these are visionary interpretations of the sensation of night, night light, with different deep blues, loons and owls, and golden fish. The moon and clouds are primary players in the drama that unfolds in each painting, one of the most dramatic works being “Over the Clouds” in which the profusion of stars and galaxies, and sparkling constellations occupy the entire top half of the work, balanced by hovering vaporous clouds below.
Trying to grasp the immensity of the universe in painting, Zakanitch creates poetry and music in gouache. These are stylized paintings, perhaps owing a small debt to Chinese, Japanese or Russian painting, and maybe even illuminated manuscripts, not to mention 1945 Armstrong linoleum. Zakanitch’s stylization is part of his on-going vocabulary and commitment to ornamentation as language. His love of ornamentation shimmers in pearl-like borders. The invented patterns at the bottom of each painting function as “anchors,” and remind us how beautiful the gesture of mark making can be.
“In the Garden of the Moon” Zakanitch dares to bring back romance in “moonscapes,” that are not simply landscapes, but mindscapes about light. Gouache is never used in heroic scale, rarely is the viewer privileged to feel the artist’s hand as it is felt in this series. These are paintings about “beauty and sumptuousness and life force, about the
beautiful music of humanity,” as the artist says. This is a new era for the artist, an era of luminosity and visual poetry addressing the immensity of the universe and man’s relationship to it.
Robert Zakanitch’s work has been shown at Arizona State University, Tempe; California Center for the Arts, Escondido; High Museum of Art, Atlanta, Georgia; Hudson River Museum, Yonkers, New York; University of Illinois, Chicago; University of Iowa Museum of Art, Iowa City; Institute of Contemporary Art, University of Pennsylvania, Philadelphia; Museum of Contemporary Art San Diego, La Jolla, California; Museum of Art, University of Oklahoma, Norman; The Nerman Museum of Contemporary Art, Overland Park, Kansas; Nassau County Museum of Art, Roslyn, New York; University of Nebraska, Sheldon Memorial Art Gallery, Lincoln; University of Nevada, Las Vegas; North Carolina Museum of Art, Raleigh; Palm Desert Museum, Palm Springs, California; The Whitney Museum of American Art, New York and abroad at Biblioteca Nacional, Madrid; Fondation du Chateau de Jau, Case de Pene, France;
Galleries Alexandra Monett, Brussels; Galleries FIX des Muses de Nice, France; Gulbenkian Museum, Lisbon, Portugal; Kunstforeningen Museum, Copenhagen, Denmark; Kunstmuseum, Lucerne, Switzerland; Modern Art Museum, Munich, Germany; Museo Tamayo, Mexico; Rheinisches Landesmuseum, Bonn, Germany; U.S. Pavilion, 39th Biennial, Venice, Italy; Wurttembergisch Kunstverein, Stuttgart, Germany.
His work is included in the collections of Albright-Knox Museum, Buffalo, New York; The Art Museum, Princeton University, New Jersey; Brooklyn Museum, New York; Denver Art Museum, Colorado; The High Museum of Art, Atlanta, Georgia; Hirshhorn Museum and Sculpture Garden, Washington, D.C.; Milwaukee Art Museum, Wisconsin; Museum of Fine Arts, Richmond, Virginia; Norton Museum of Art, West Palm Beach, Florida; Philadelphia Museum of Art, Pennsylvania; Phoenix Art Museum, Arizona; The Whitney Museum of American Art, New York; and abroad in Musée de Strasbourg, France; Musée regional d’art contemporain, Languedoc-Roussillon, France; Osaka Museum, Japan; and The Tate, London.
He was awarded a John Simon Guggenheim Foundation Grant. The artist resides in New York.
For information and/or photographs, please call the gallery at 212-966-6676 or e-mail at [email protected] .com.
Yours sincerely,
Nancy Hoffman