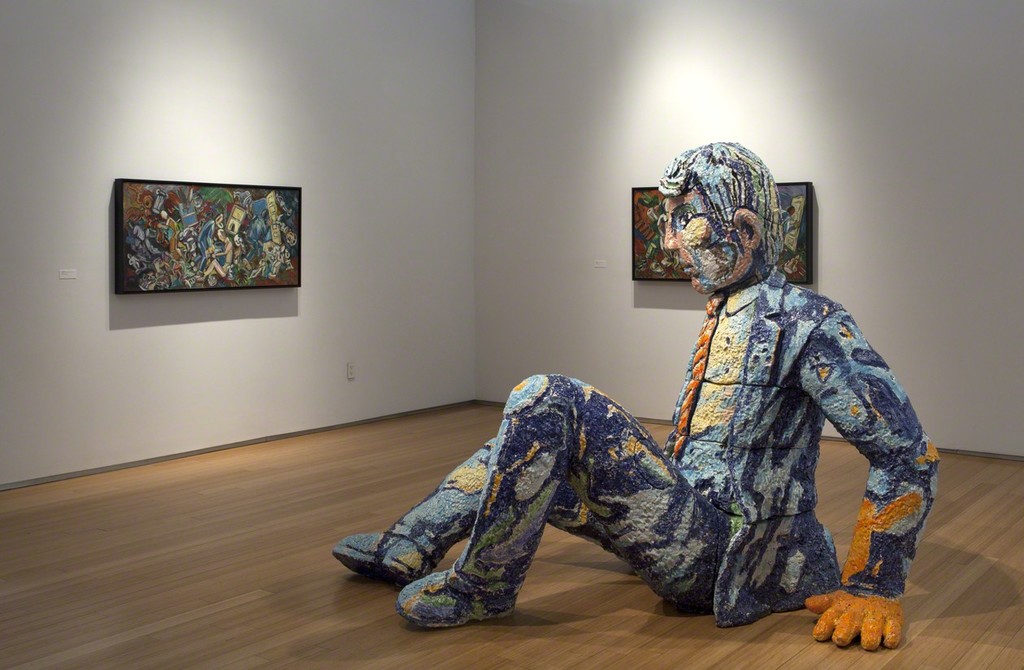 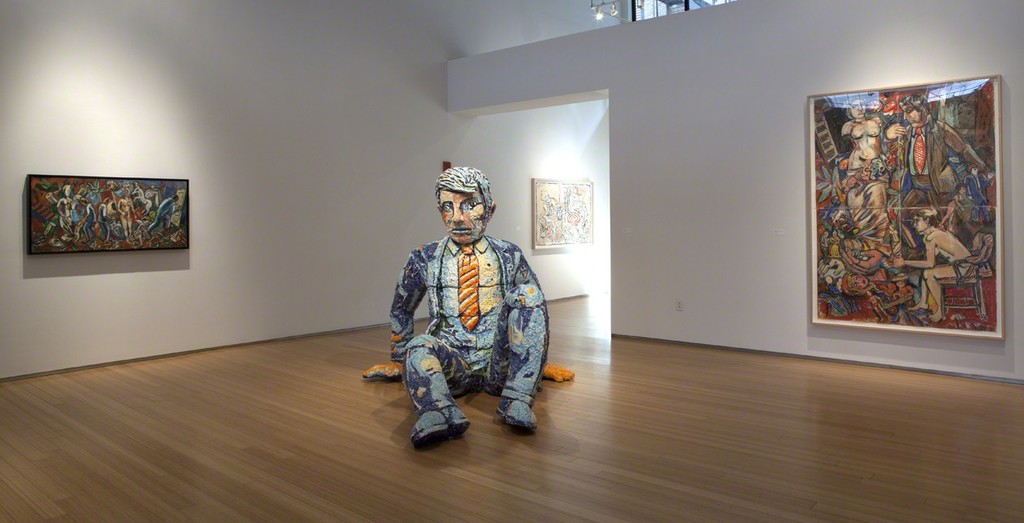 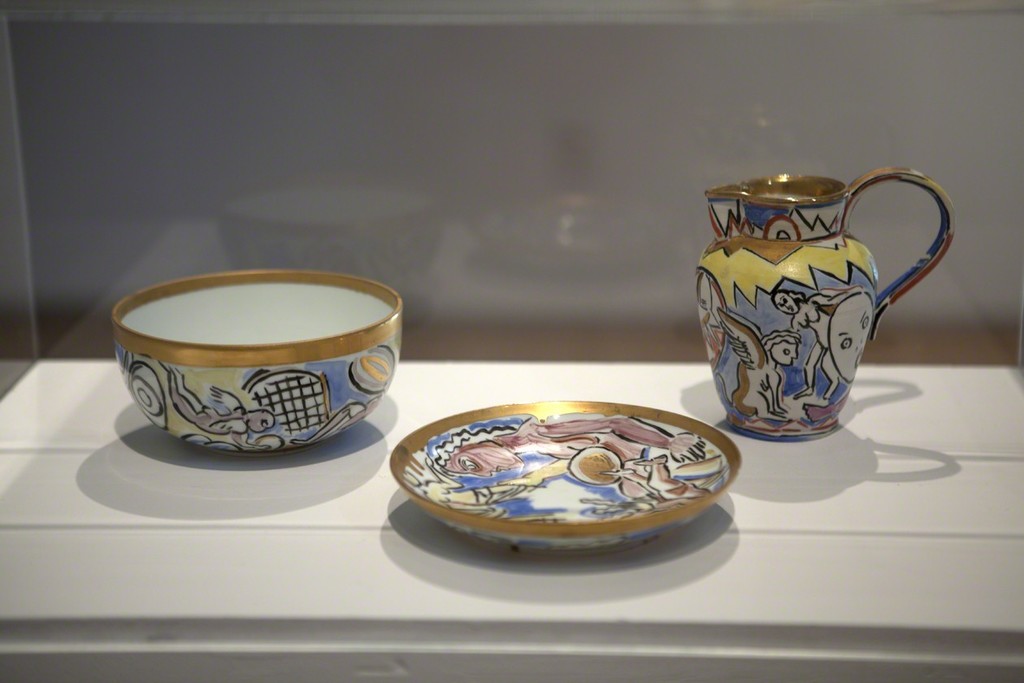 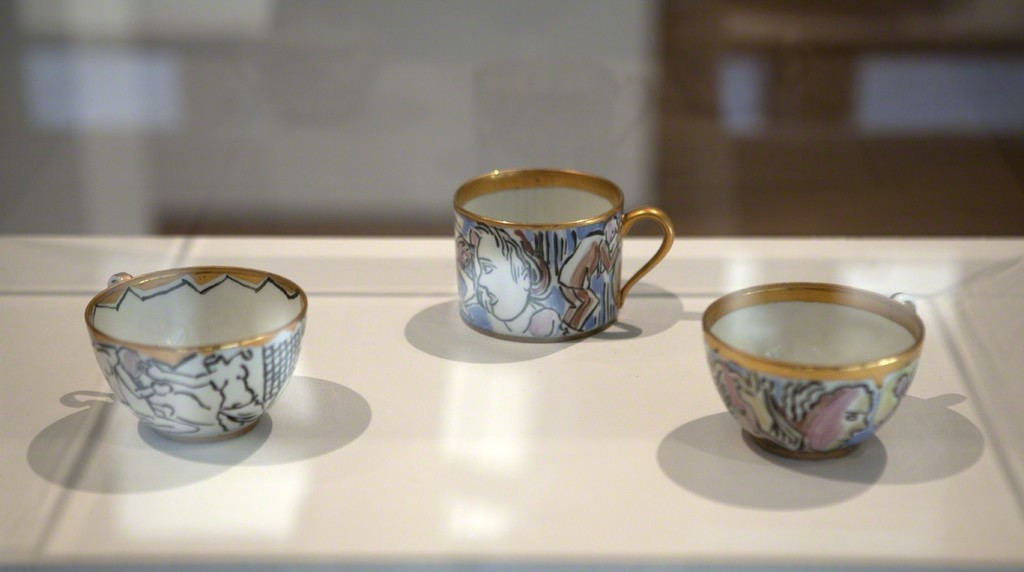 Nancy Hoffman Gallery hosts “Viola Frey: A Personal Iconography,” the fourth posthumous exhibition of the artist’s work, including paintings, a monumental figure sculpture, porcelains created at Sèvres and a panoply of heraldic tondos. The exhibition opens May 7th and continues through June 27th. On view for the first time is the full range of the artist’s works created at the Nationale Manufacture de Porcelaine at Sèvres. Frey worked on traditional porcelain forms, glazing them in her personal style and fashion with gusto, covering them with figures: men in power suits, women in birthday suits, foliage, flowers, heads referencing art history, swirls. She decorated cups and saucers, urns, pitchers, teapots and plates in her recognizable palette of blues, reds and oranges, garnished with ample gold leaf to honor the French tradition of ornamentation. In contrast to the traditional glazing of Sèvres, Frey uses a black drawing line to delineate some of her imagery; her nod to tradition is to rim a cup or plate with gold.
While most of the pieces created at Sèvres remain in its museum collection, the artist retained fewer than a dozen works from her three stays outside of Paris, in Sèvres. She enjoyed working in this historical studio, a contrast to her Oakland space, a huge airplane hangar-like warehouse. In Sèvres she was surrounded by ancient urns and porcelain creations of centuries past, sensational objects. For the first time, the Artists’ Legacy Foundation, caretakers of the Frey Estate, has released the entire collection of Sèvres pieces for public viewing, an exciting group of jewel-like treasures to behold.

Frey loved the human figure; she also loved color. Her palette was oranges, reds, blues and pinks. Her monumental standing men, up to 11 feet in height, are often dressed in blue power suits, wearing red ties; her seated women usually wear pink birthday suits. In this exhibition, both color and iconography unite the different materials. “Falling Man in Suit,” measuring 74x89x73 inches, is glazed in several shades of blue with an orange striped tie and orange hands. His palette parallels two “Studio View” paintings, also works never before exhibited. Color, particularly blue, is a unifying thread, one painting has “three blue suits, “ the other has a woman with a vase on her lap, amidst a flurry of activity with blue-suited men. Both paintings, filled with Frey figures and figurines contain windows and doorways, another signature Frey image, offering an escape hatch from the creative energy that was her studio.
Every few years Frey would work on a body of heraldic tondos filled with her icon-ographical images: faces, hands, commedia dell’arte masks, figurines, horses, among other imagery. Dating from 1978 to the early 2000s, the plates evolve from flat tondos to sculptural, bas relief works with rich and juicy color. The earlier plates tend toward monochrome, after the mid-‘80s a riot of color burst forth in the tondos, almost always anchored by an Egyptian paste calligraphic circle as a frame or surround of the interior activity. Egyptian paste, used over the centuries for fine details, became an abstract bold gesture in the artist’s hands, a framing device to anchor the animated tondo activity. One might say that the plates framed in Frey’s black circular gesture parallel the Sèvres pieces rimmed in gold, the perfect finishing touch for each medium.

Viola Frey was born in 1933 in Lodi, California, and died in Oakland, California, in 2004. She received her B.F.A and an honorary doctorate from the California College of Arts and Crafts in Oakland and attended graduate school at Tulane University. The recipient of two National Endowment for the Arts fellowships, she was also presented with the Award of Honor in Sculpture from the San Francisco Arts Commission.