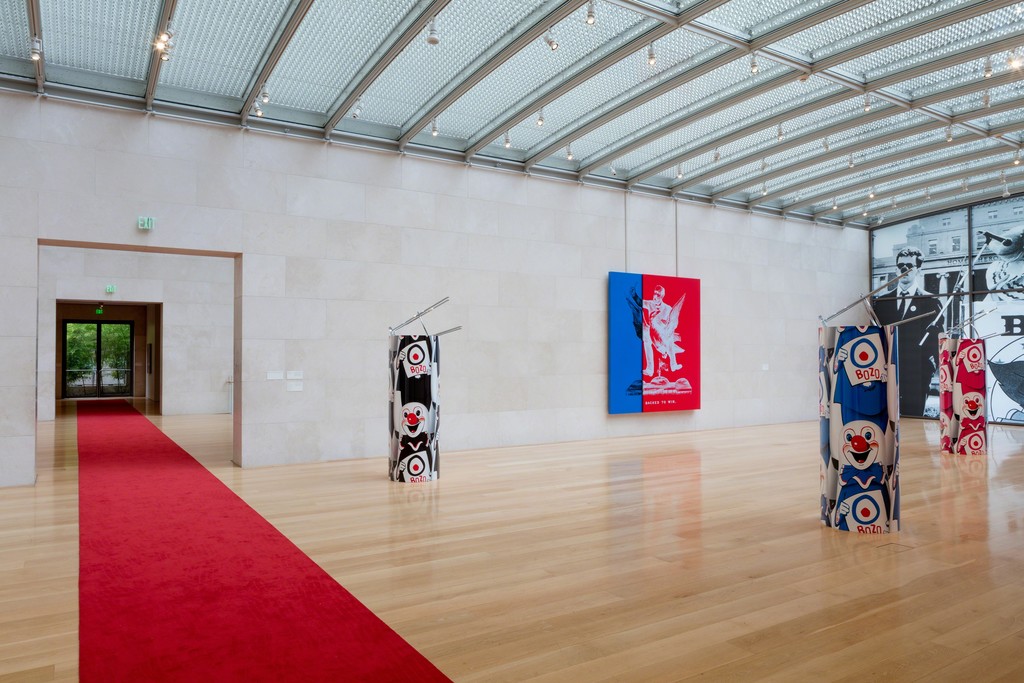 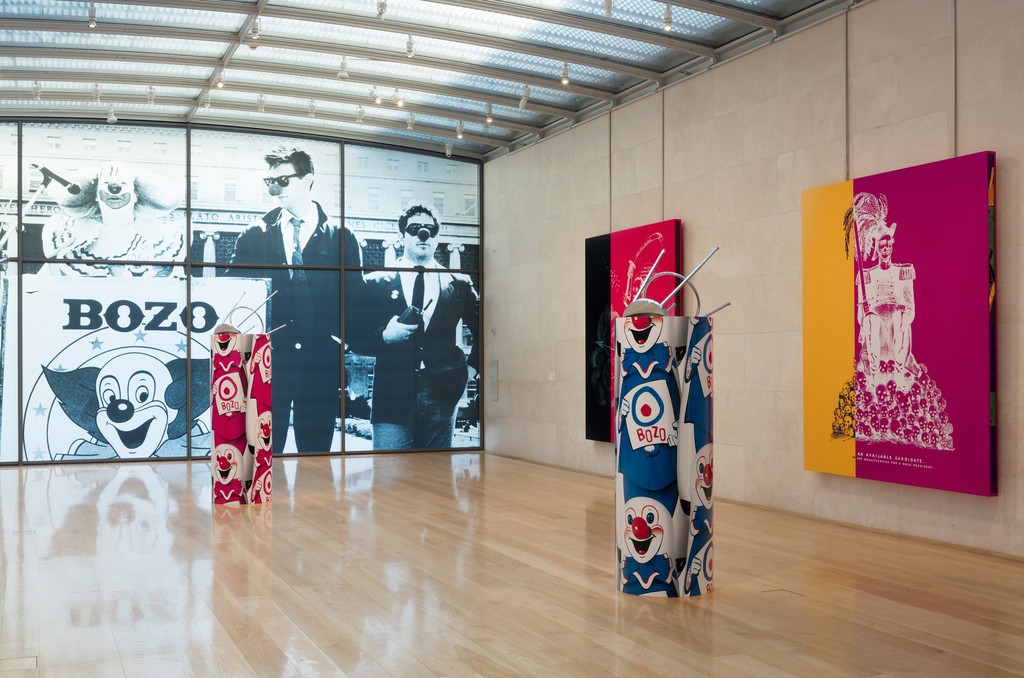 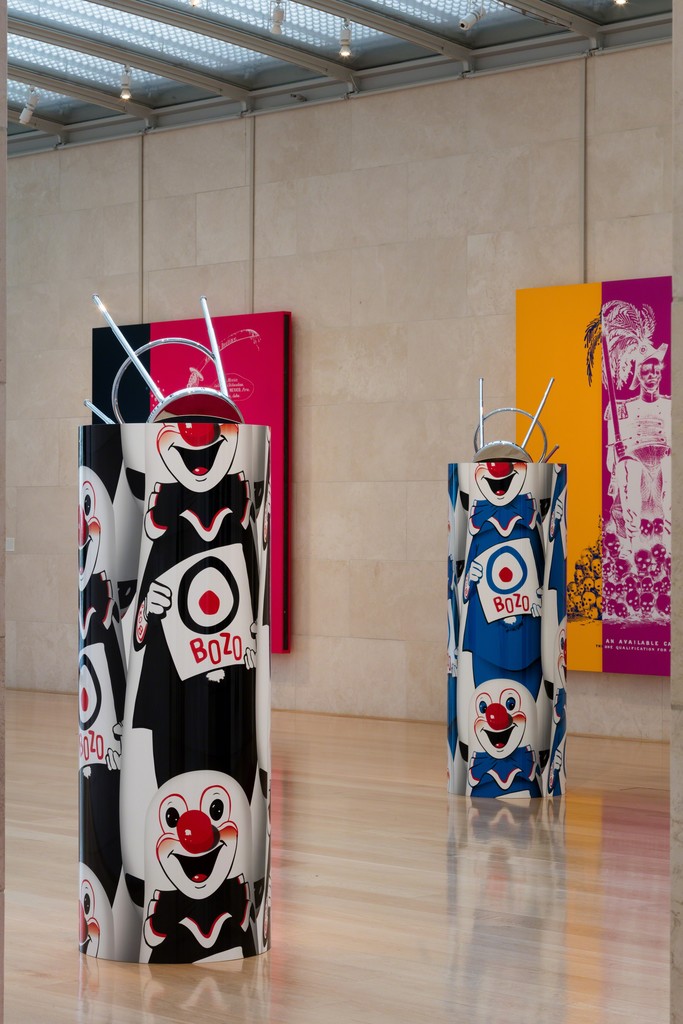 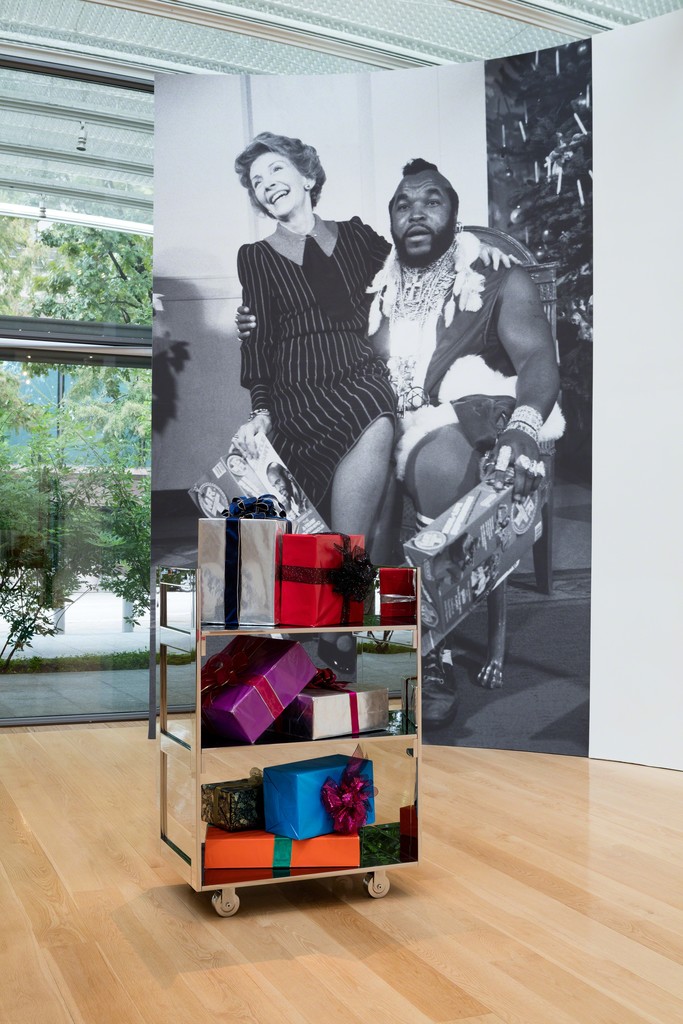 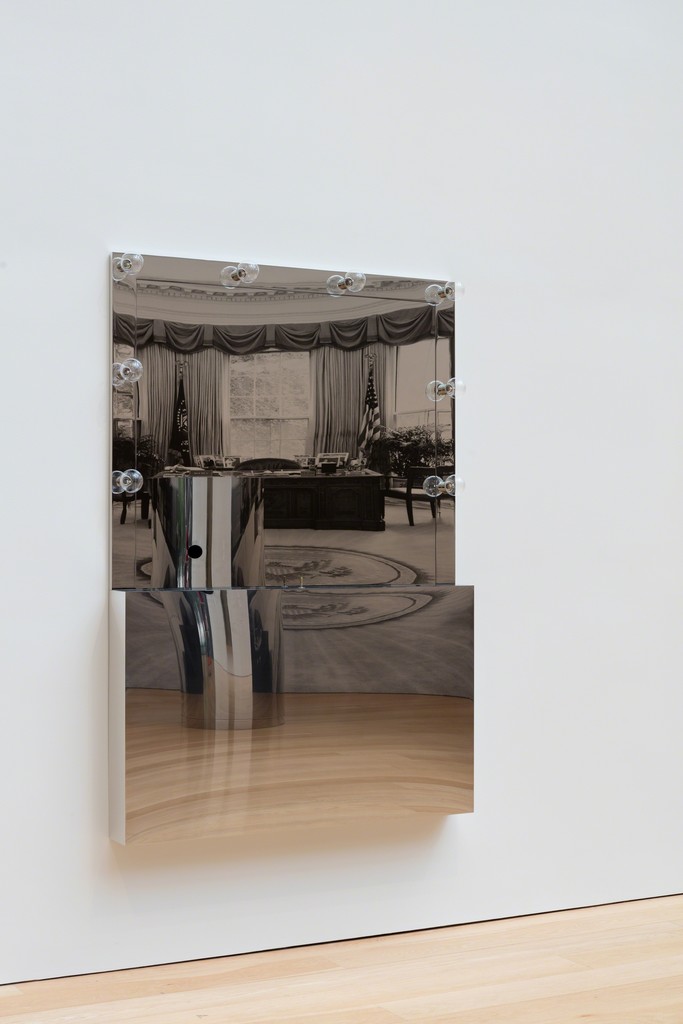 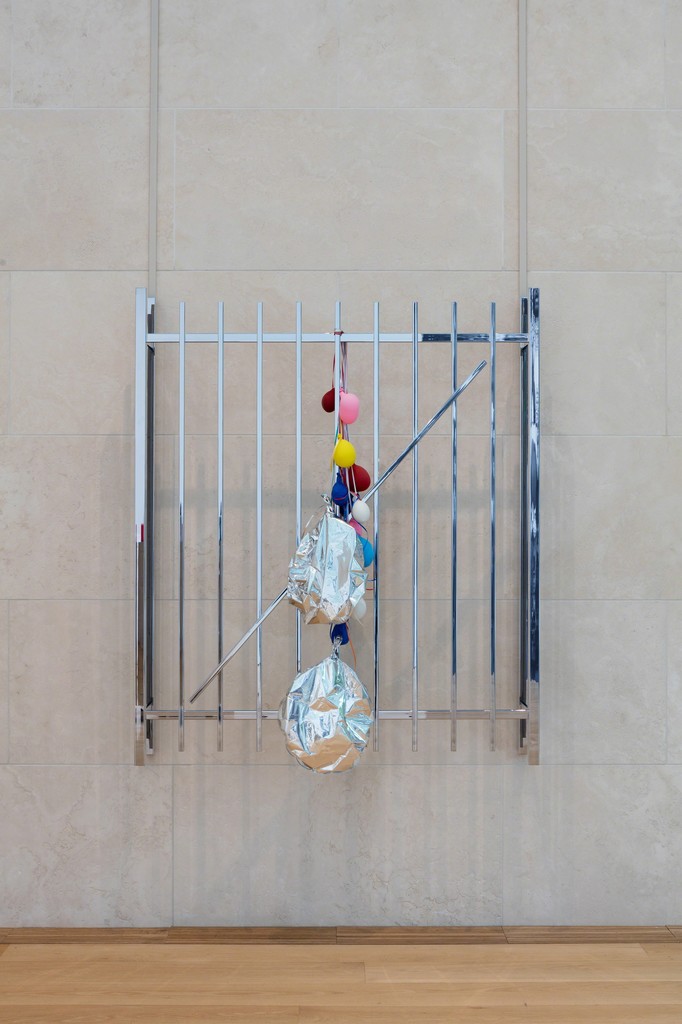 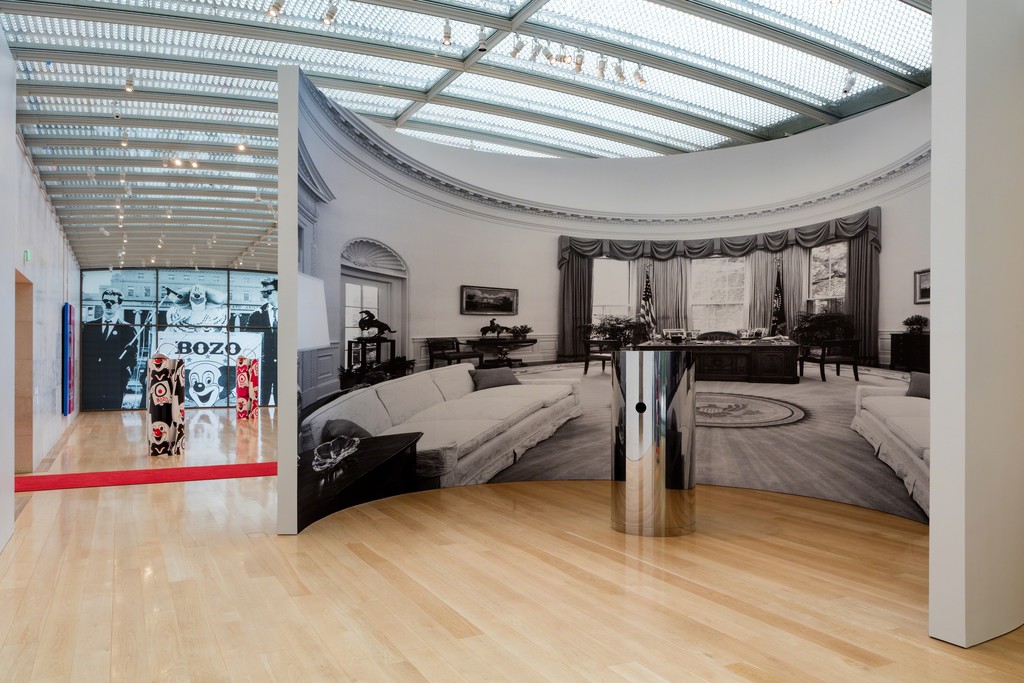 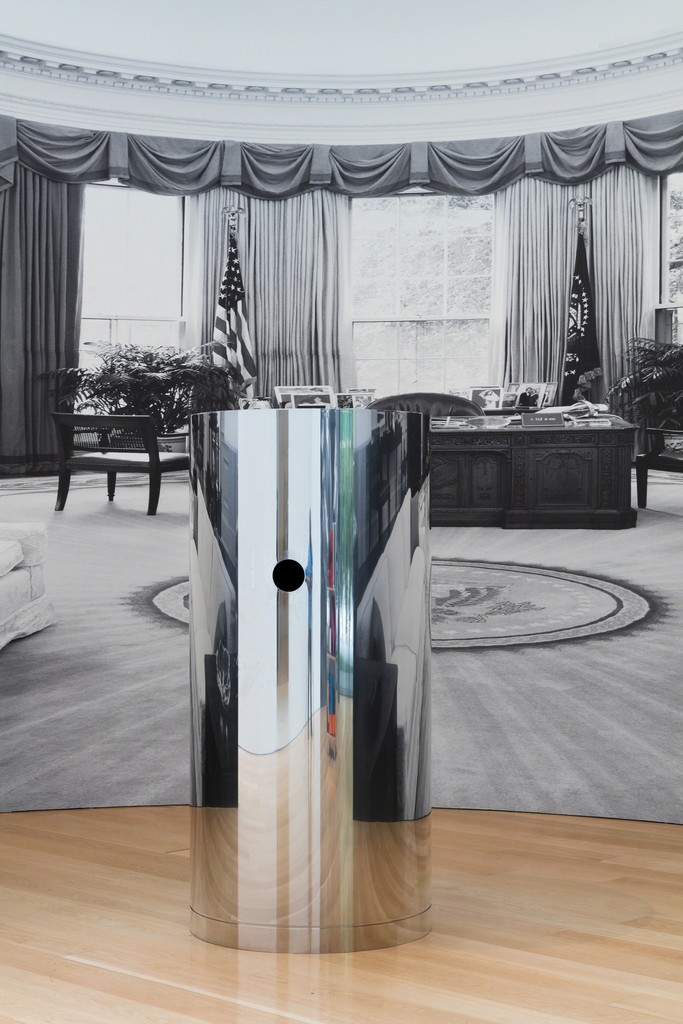 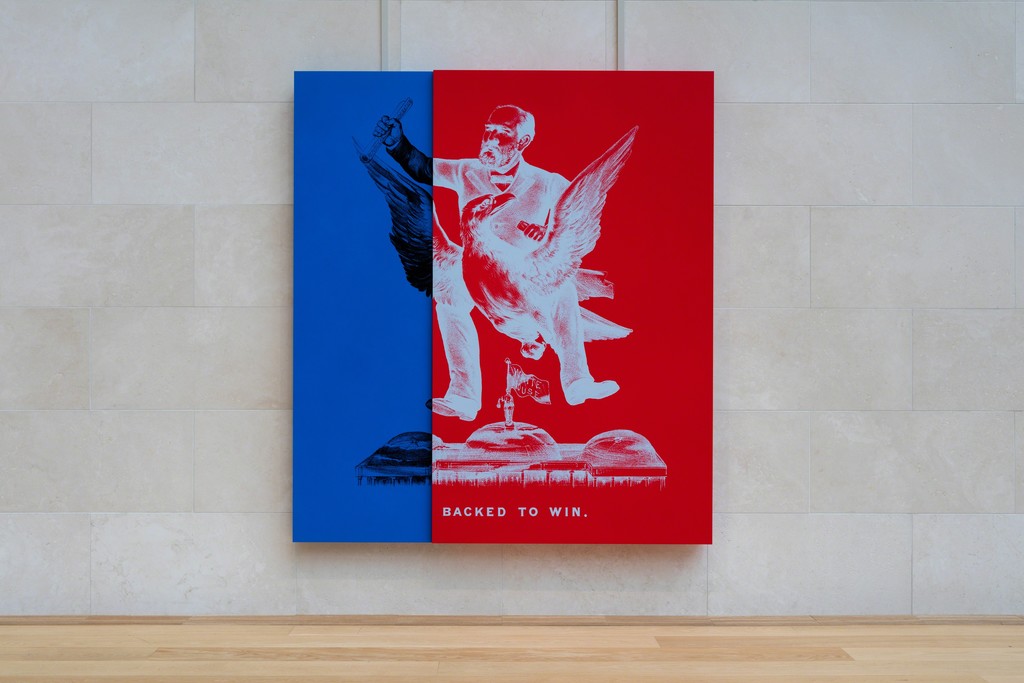 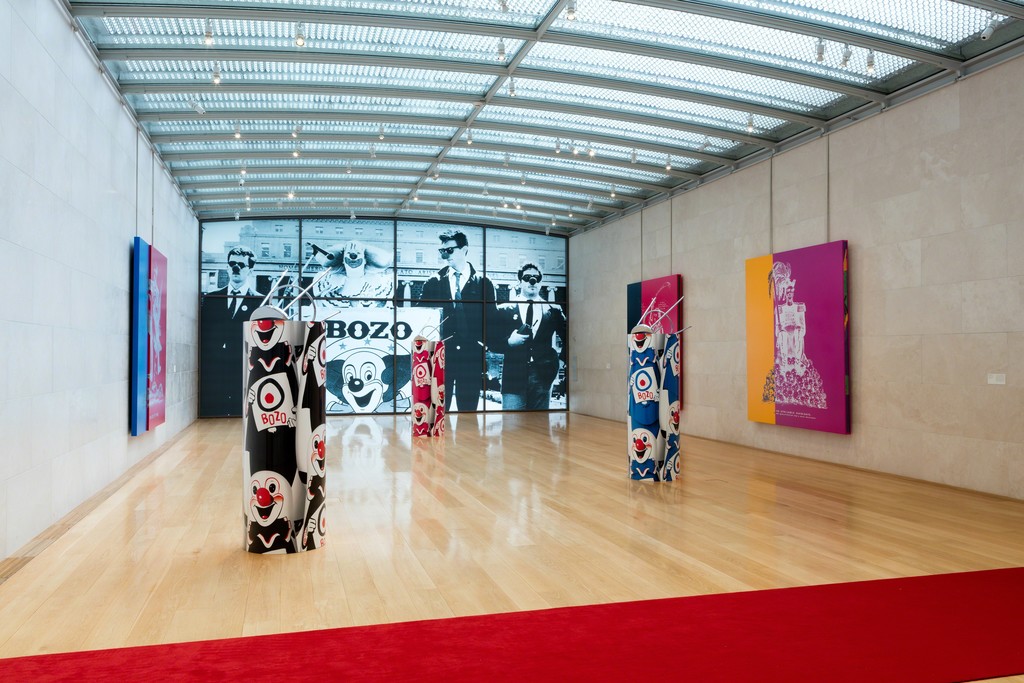 The Nasher Sculpture Center presents Kathryn Andrews: Run for President, on view from September 10, 2016 through January 8, 2017. The exhibition is organized by the Museum of Contemporary Art Chicago and curated by Julie Rodrigues Widholm, former MCA Curator and current Director of the DePaul Art Museum. For this exhibition, presented during the height of the 2016 presidential race, Andrews situates her work against the conceptual and pictorial backdrop of a fictitious presidential election. Using materials such as brightly painted Currier & Ives images taken from historical political campaigns and famous props from Hollywood movies such as the costumes worn by Tobey Maguire in Spider-Man and Jack Nicholson in Batman, she creates a loose narrative around candidates, campaigns, sitting in office, and the end of a presidency. With massively-scaled photomurals, which appropriate images such as Sammy Davis Jr. with President Richard Nixon and Bozo the Clown running for president, the exhibition charts the interdependency of America’s electoral history and its obsession with entertainment.

“We are so pleased to be able to present Kathryn Andrews’ insightful investigation of the imagery of American politics in Run for President,” says Nasher Sculpture Center director Jeremy Strick. “No doubt this exhibition will prove timely, but beyond its topical relevance, Andrews’ work offers a fascinating hybrid of a number of artistic and cultural vocabularies, extending the formal range of sculpture, as well as its cultural resonance. As occurred with the exhibition’s presentation in Chicago, we’re confident that many conversations about the intertwining of American politics with visual culture will arise from Andrews’ material and intellectual provocations.”

With their lively colors and reflective surfaces, many of the works in Run for President literally reflect the viewer and the surrounding environment. Andrews, who is deeply interested in contemporary culture, examines how image producers—such as artists, corporations, Hollywood studios, and politicians who mirror and shape social values at large—employ visual cues and material packaging to elicit desire. Her sculptures often contain multiple layers of meaning and reference the aesthetics of pop art, minimalism, and conceptualism. “Throughout the exhibition,” as Art in America noted, “she deftly traces a visual history of the intersections of electoral politics, media and mass spectacle.”

In complement to the conceptual themes of the exhibition, each of the wall-sized photomurals serves as a backdrop, conjuring new and different connotations from the works of art in their proximities. In addition to Sammy Davis Jr. and Bozo the Clown, there is a photomural of Mr. T with Nancy Reagan at the White House Christmas Party and one of the Oval Office. The interplay between the sculptures and the surrounding images explores cultural connections that are both humorous and critical, and Andrews demonstrates how the construction of meaning is always in flux.

Kathryn Andrews (b. 1973) has recently presented solo exhibitions of her work at the Bass Museum of Art, Miami (2014), and Museum Ludwig, Cologne in an exhibition called Special Meat Occasional Drink (2013). Recent group exhibitions featuring her work include: Teen Paranormal Romance, The Renaissance Society at The University of Chicago, Atlanta Contemporary Art Center, and the Santa Barbara Museum of Art (2014–15); The Los Angeles Project, Ullens Center for Contemporary Art, Beijing (2014); Made in L.A. 2012, Hammer Museum, Los Angeles (2012); and First Among Equals, Institute of Contemporary Art, Philadelphia (2012). Andrews lives and works in Los Angeles.