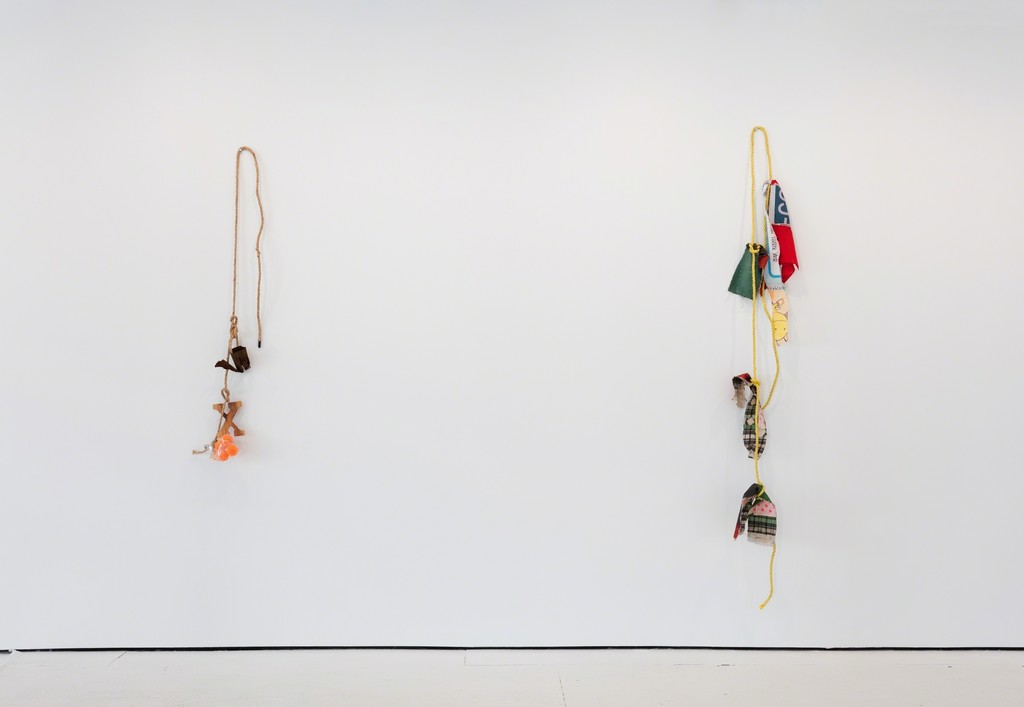 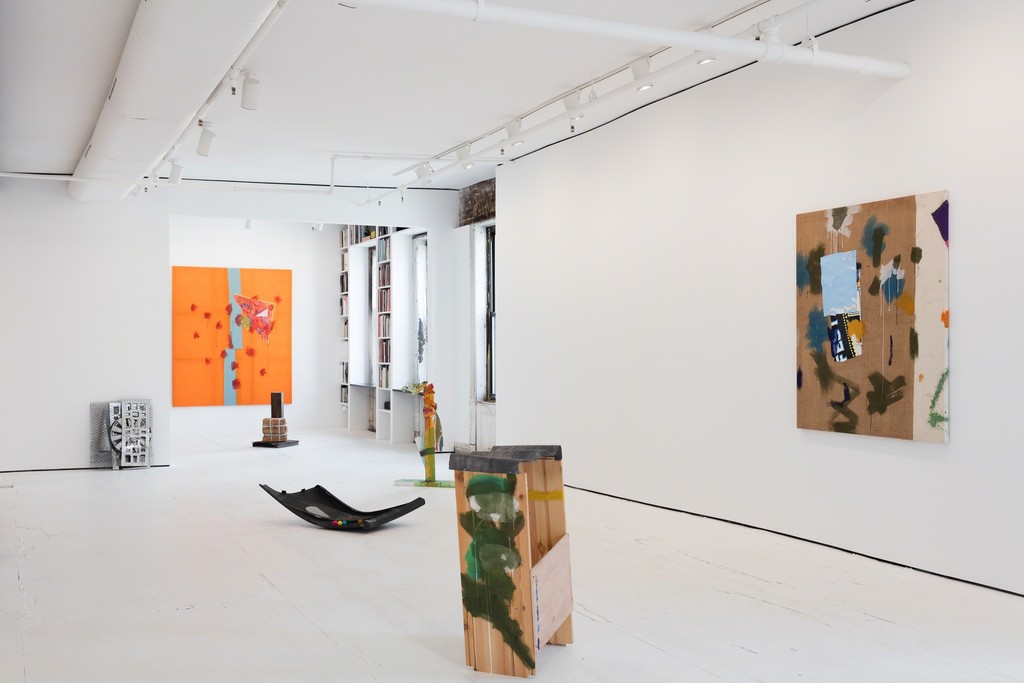 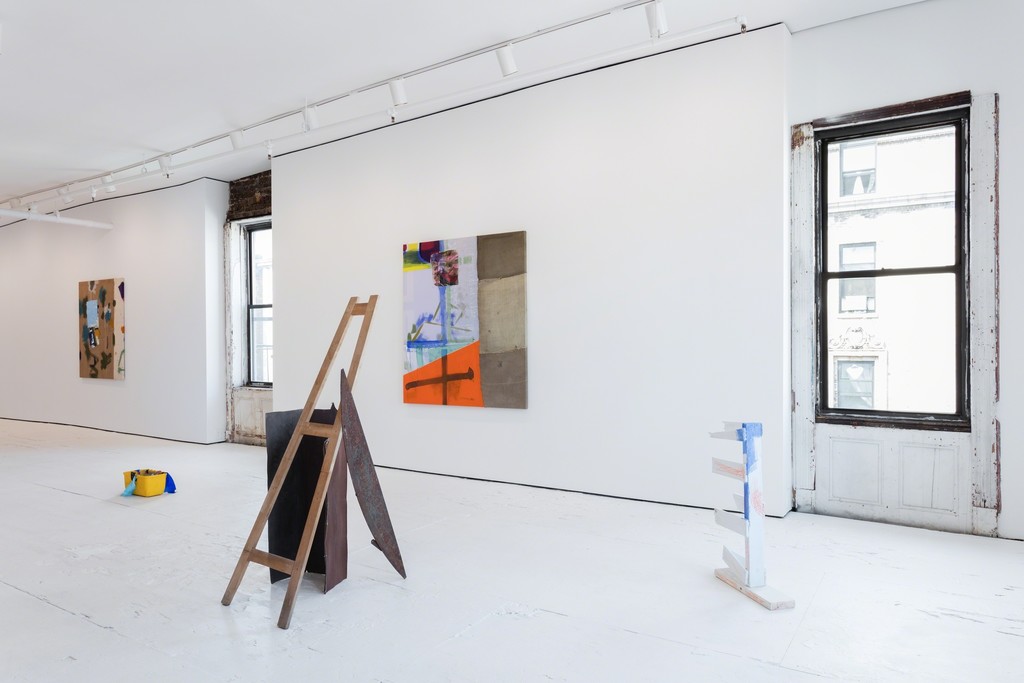 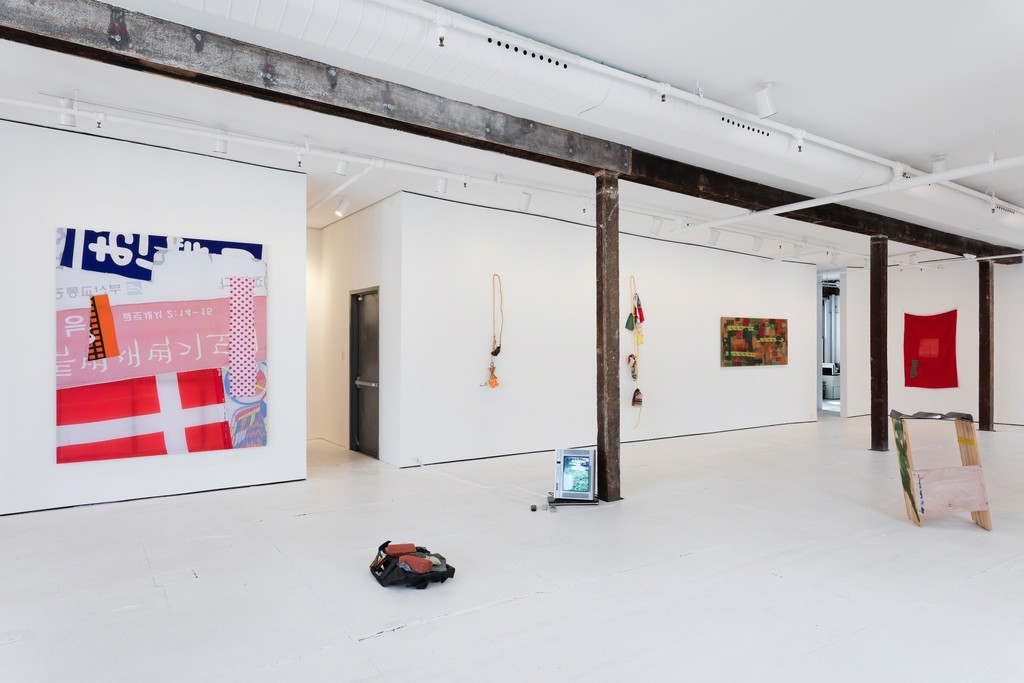 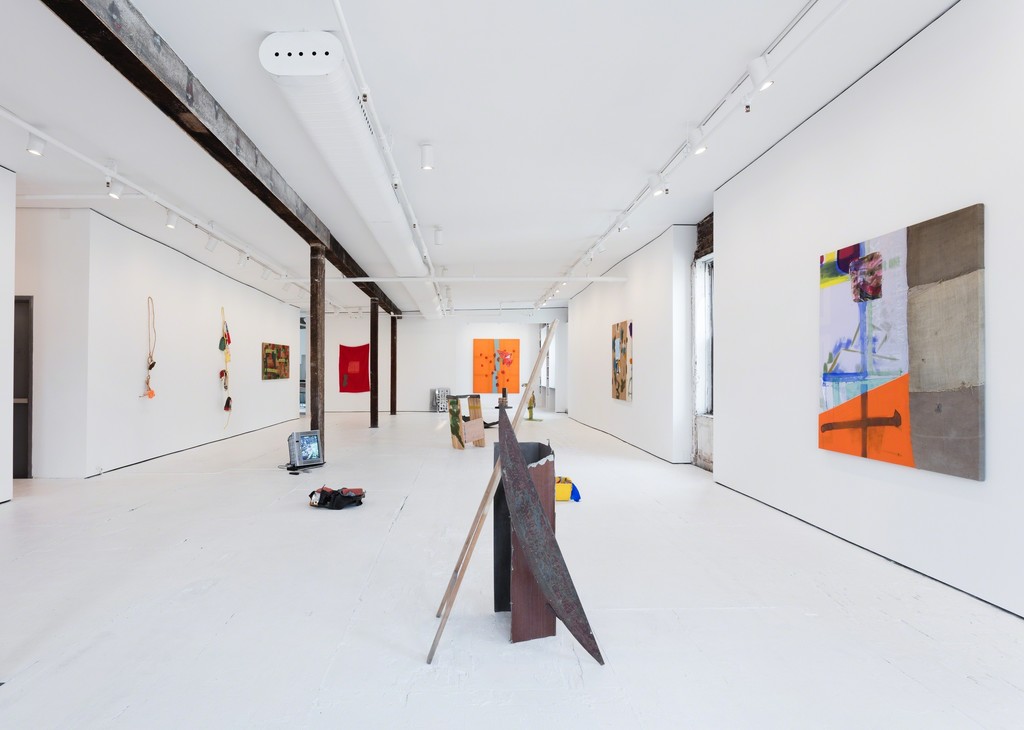 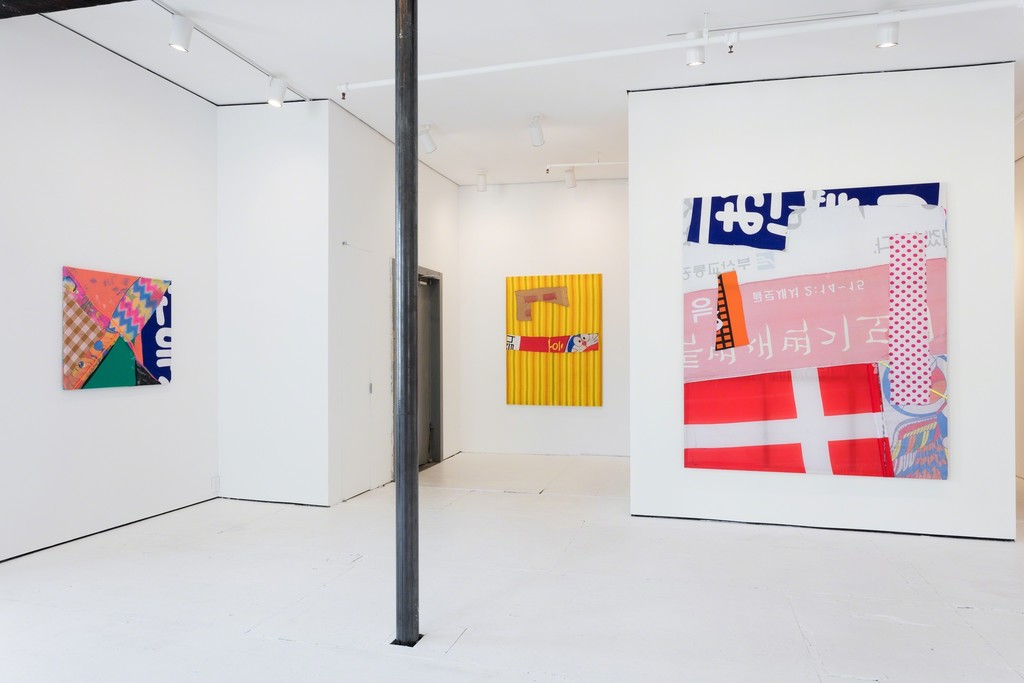 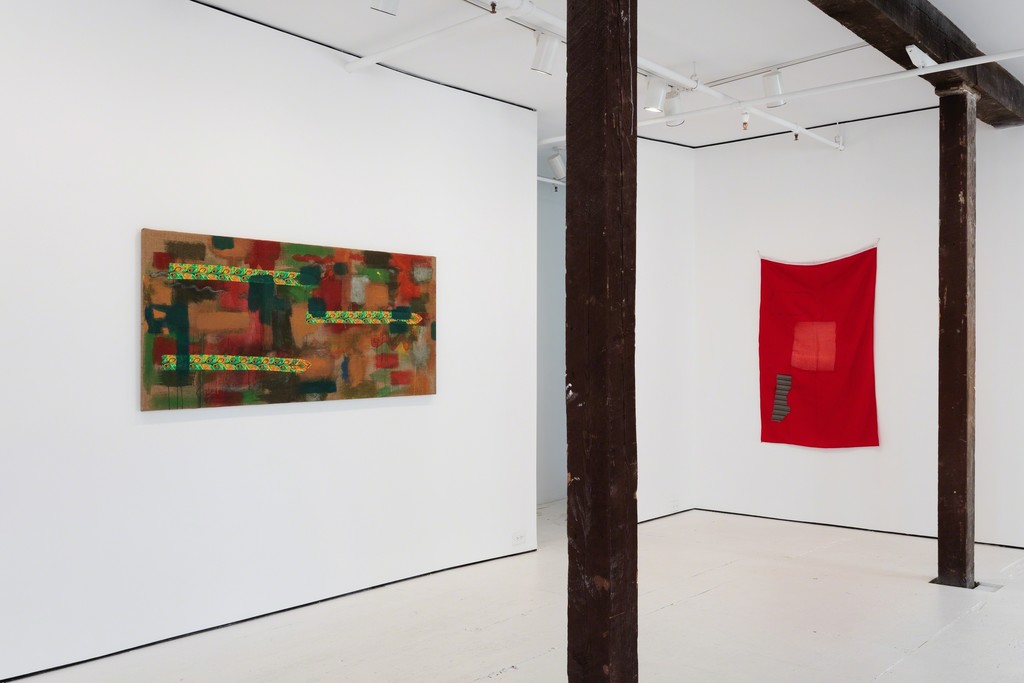 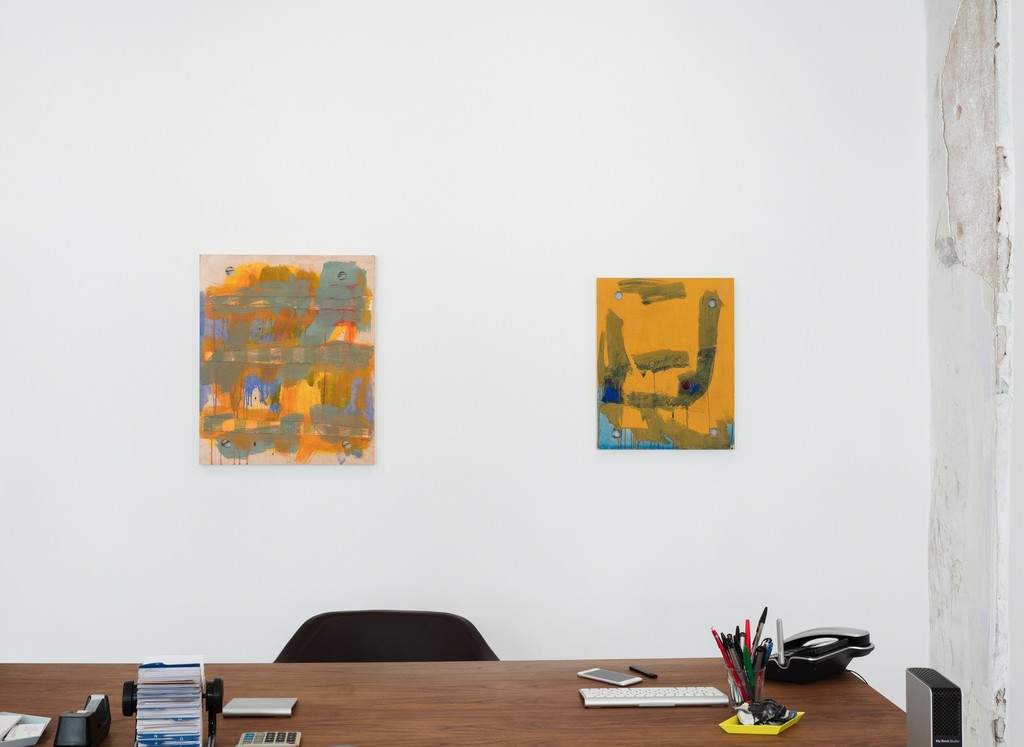 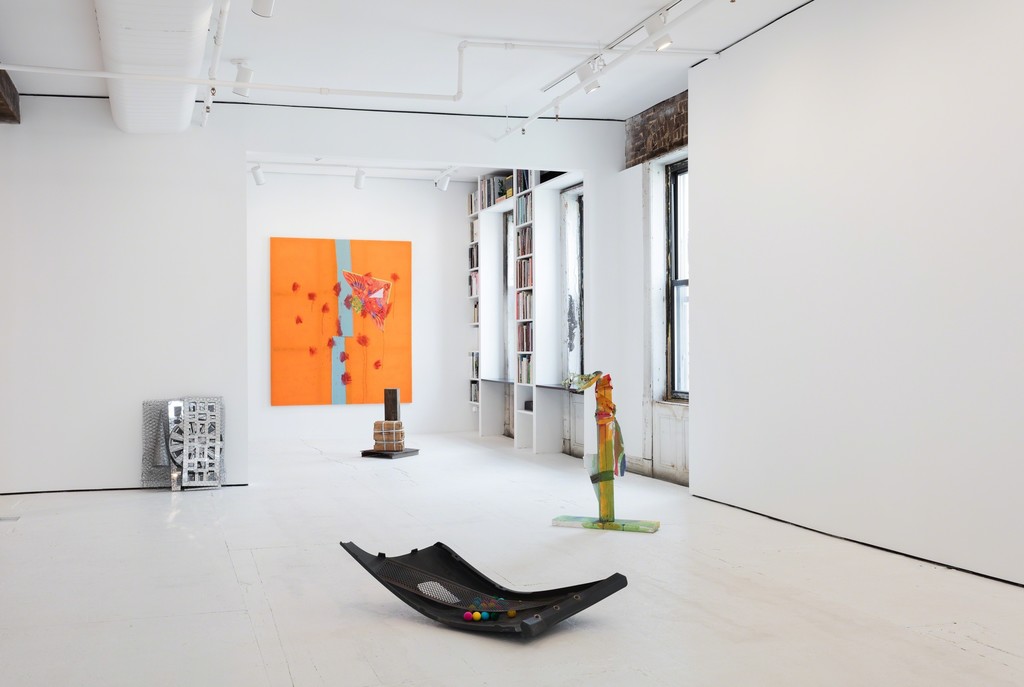 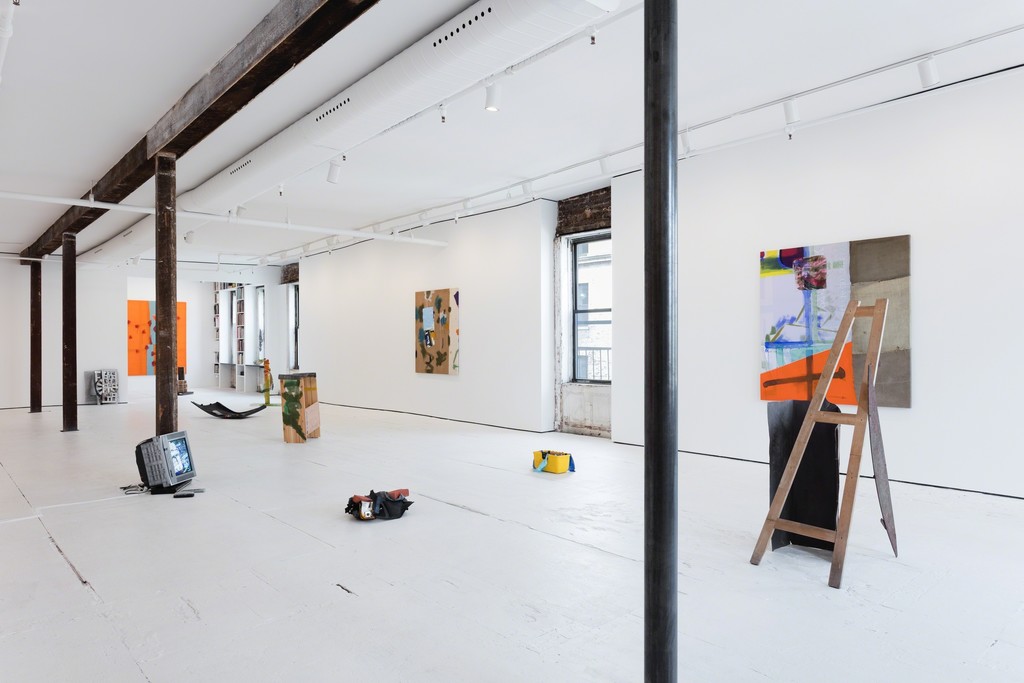 Kiss the Sky, the title of the artist Joe Fyfe’s first solo exhibition with Nathalie Karg gallery, is also the title of one of the larger paintings, assembled from felt and cotton and daubed with acrylic blotches that surround a Vietnamese-made kite embedded in its surface. According to the artist, the title, a line from Jimi Hendrix’ song Purple Haze, reminded him that what kites do when they are in the air is kiss the sky. A number of the paintings here were assembled from parts of kites, found in the markets of Southeast Asia, where Fyfe has spent time
A kite is also, says Fyfe, an example of an “alternative form” of the painting such as a banner, pennant, curtain, umbrella, etc. These everyday objects are seen by the artist to be abstractions of the picture/painting-form and represent his interest in making art objects with common materials. The work does not so much attempt to make a bridge between art and life says Fyfe, but more a bridge between “art and stuff”, that is by slightly raising our consciousness of our moment to moment existence with the quotidian objects and materials that surround us. Many of his more recent works have migrated towards sculpture, hybridizing the pictorial in ways that are both formalist and post-formalist, concerned as they are with a direct but economized aesthetic decisions as well as with larger geo-political resonances.
For example, a number of paintings were assembled from weatherized fabric printed with Korean text that was originally used for outdoor advertising in Korea. This fabric was then collected into job lots sent to Cambodia where it was re-purposed as sun-covering tarpaulins and umbrellas. The artist found bundles of them in local markets and decided to use them in paintings, piecing together colorful abstractions but also making a comment on the fictional aspect of contemporary modernity known as globalism--that “champions the free movement of goods but limits the free movement of people”.
A short continuous video, also included in the exhibition, records a Sunday morning on the Mekong River where a large group of volunteers clear floating greenery and debris in order to make docking room for boats. The film is about an artistic ideal realized in an environment where “the manmade and natural are deeply intertwined”. The short video offers a tribute to the spirit of the Vietnamese people whom Fyfe describes as “optimistic, collaborative and improvisatory”.
Joe Fyfe (b. 1952 in New York City ) is an artist based in New York City. He received his BFA in 1976 from the University of the Arts in Philadelphia, Pennsylvania. His work has been included in numerous solo and group exhibitions in locations such as Galerie Christian Lethert in Cologne, Germany; Ryllega Gallery in Hanoi, Vietnam; Galerie Bernard Ceysson in Geneva, Switzerland, White Columns in New York City and Monroe Brown gallery, Western Michigan University.