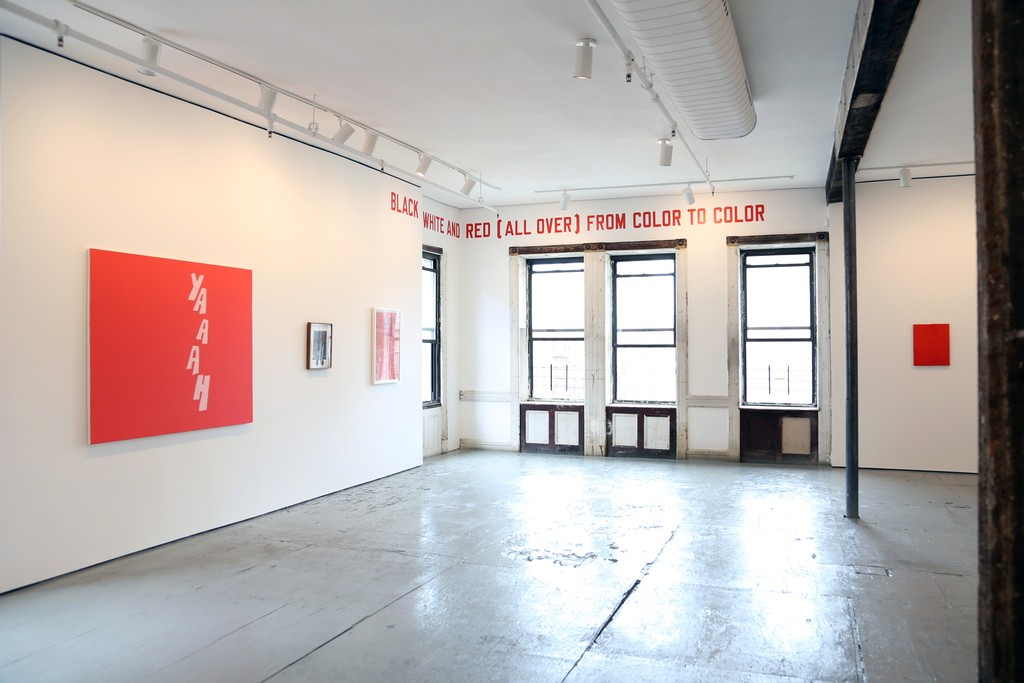 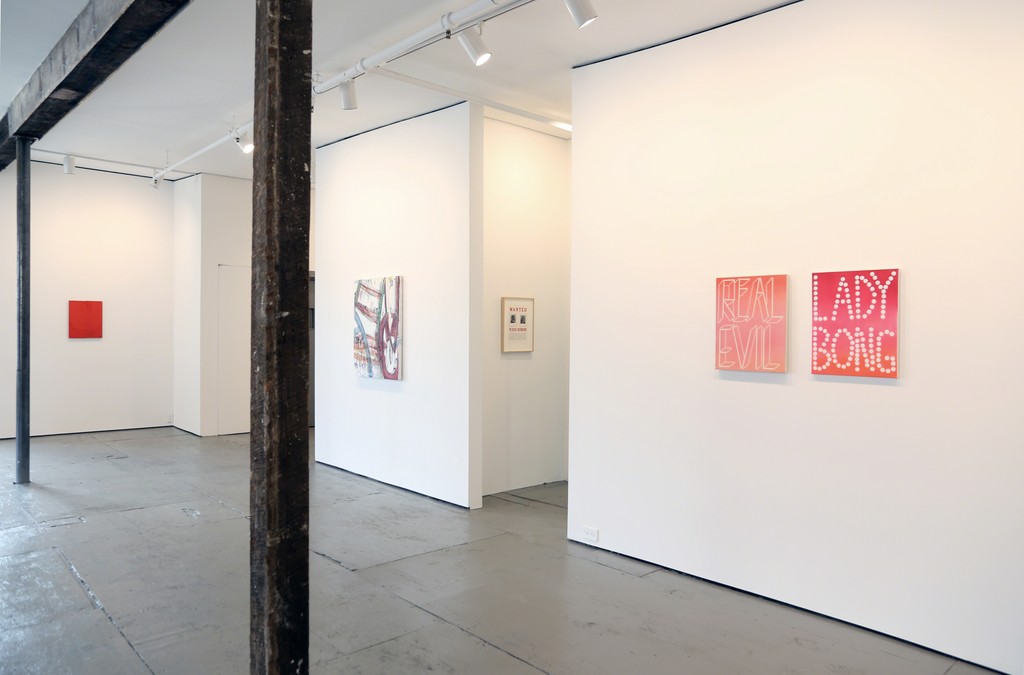 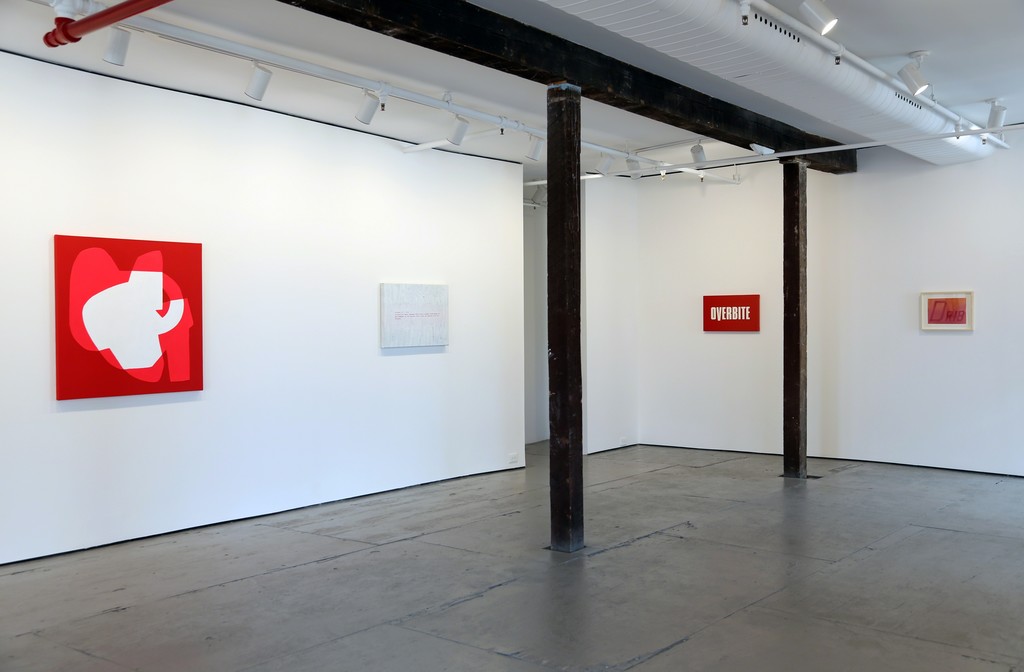 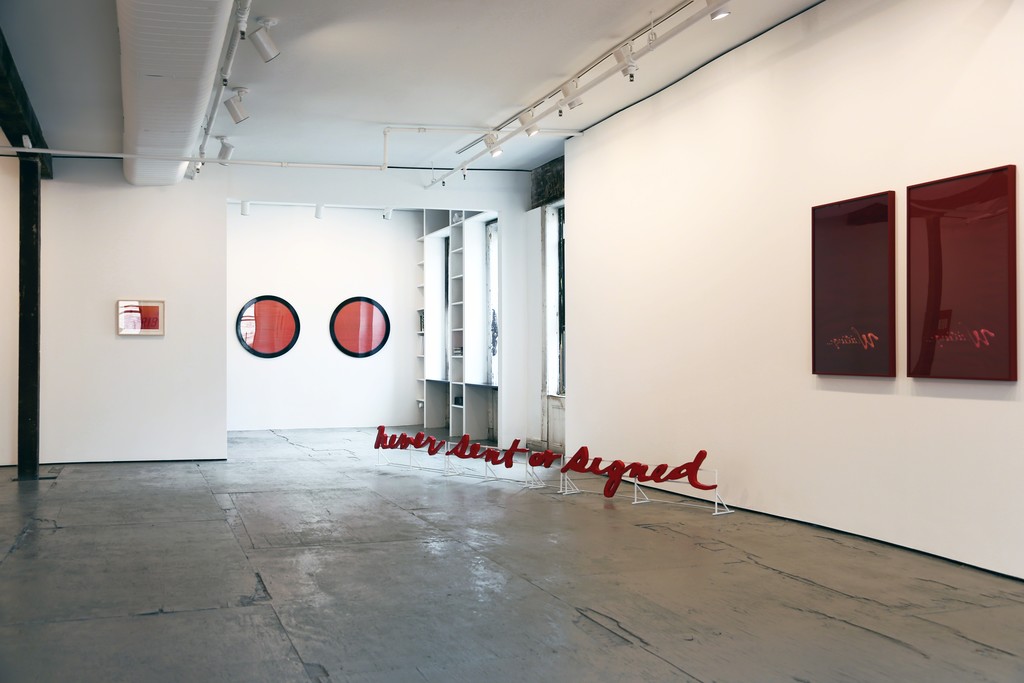 Nathalie Karg Gallery is pleased to present RE(a)D, an exhibition curated by Ryan Steadman. RE(a)D is a tribute to curator Bob Nickas who introduced his series of RED exhibitions in 1986 at the Massimo Audiello Gallery in New York City and later became well-known for appropriating a number of seminal exhibitions from the 60s as a method for designing his own curated exhibitions.

RE(a)D is a continuation of Nickas’ use of the umbrella term “red”, but doubling it with the use of its homophone “read”. Commonality is probably the original modus operandi behind the act of curating, so why not multiply it? By overemphasizing the curating as such, it is Steadman’s hope that these banal connections can be neutered, letting the viewer revel in the individuality of each artist.

Therefore, when you discuss how Ed Ruscha’s appropriated typefaces, Bobbi Woods’ overpainted movie posters that reveal only the titles, and Andrew Brischler’s appropriated film fonts are similar, perhaps this context will beg the question: what are the discrepancies of this perceived similarity? For one, Ruscha’s motive was to re-contextualize type design in order to create thoughtful content, while Woods highlights found titles and fonts in order to isolate the mystery and magic of storytelling. Brischler, on the other hand, is more concerned with abstracting our emotion-laden reads through his laborious process.

Nathlie Provosty’s curvy letter-inspired abstractions might have some similarities to Hayal Pozanti’s at first, but investigation reveals that Pozanti has in fact created her own abstract alphabet (one that can even be translated), while Provosty often uses a ubiquitous shape that doubles as picture and text in order to create a tightly-knit space filled with subtly shifting shapes and tones.

Anthony Campuzano, Keren Cytter, James Lee Byars, and Despina Stokou all use handwritten confessional texts to create abstract compositions, but each artist uses completely unique forms, palettes, lines, and materials with which to decorate their own private worlds.

One could say that Lawrence Weiner, Scott Reeder, and Kay Rosen all use the principals of our written language as the compositional basis of their works, yet Rosen is completely focused on an intense dissection of formal elements, while Weiner is attracted to the way that language can change our environment. Reeder on the other hand, plays games with process to reveal nonsensical meanings that point to the freedom of play.

Will Pergl and Nils Karsten both use shifts in scale and material so that we can re-imagine the meanings held within objects, but one artist works with two dimensions while the other works in three.

Carl Ostendarp, Ray Johnson, and Richard Pettibone all famously appropriate, but with intents and aesthetics that vary wildly.

Are we then to view RE(a)D as seventeen solo shows with a few superficial connections? Hardly. But if we’re lucky, maybe experiencing this exhibition will prompt even the slightest realignment of relationships between curating, artworks, and ideas.