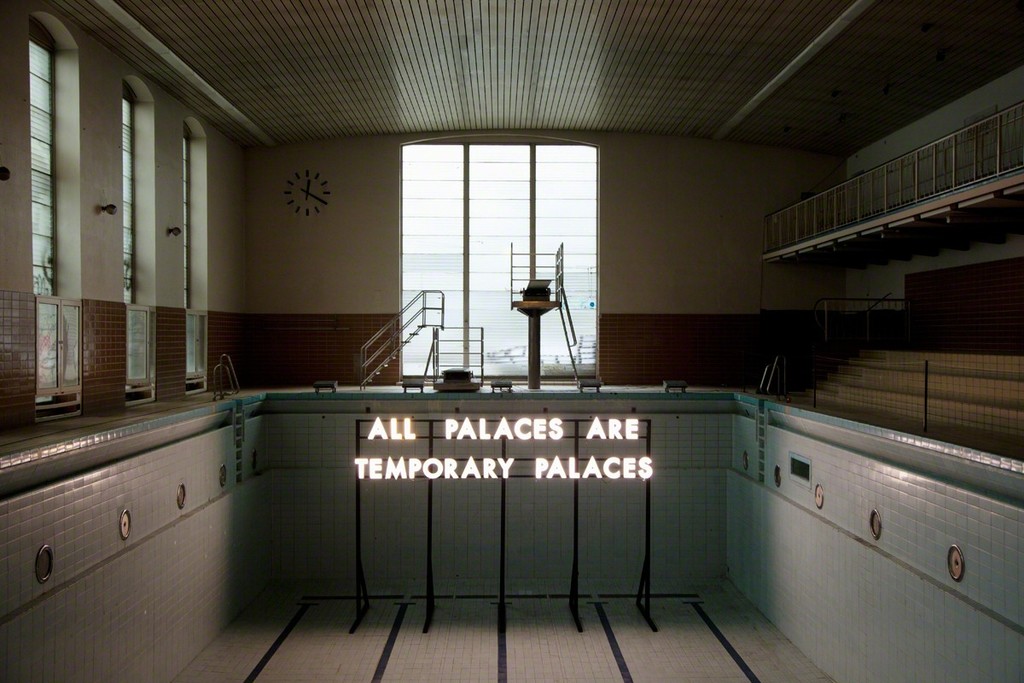 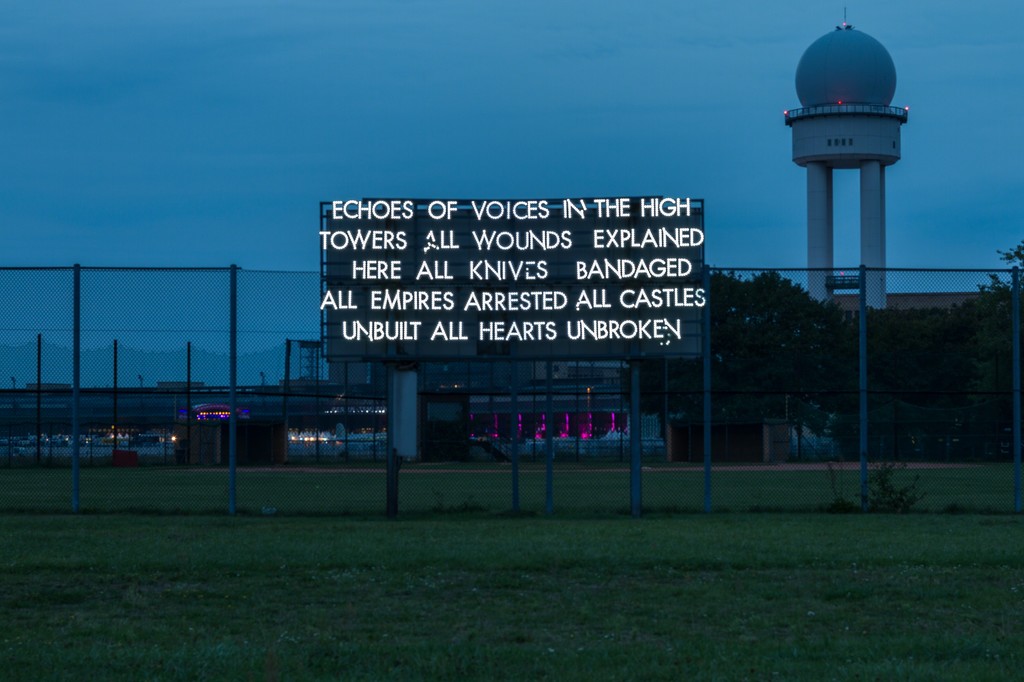 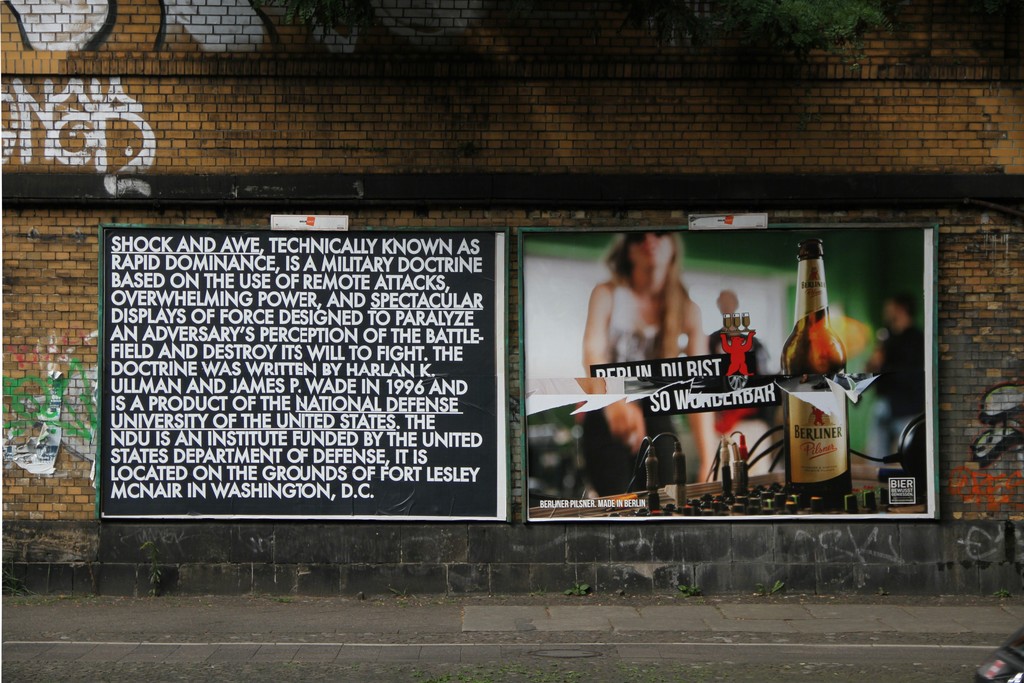 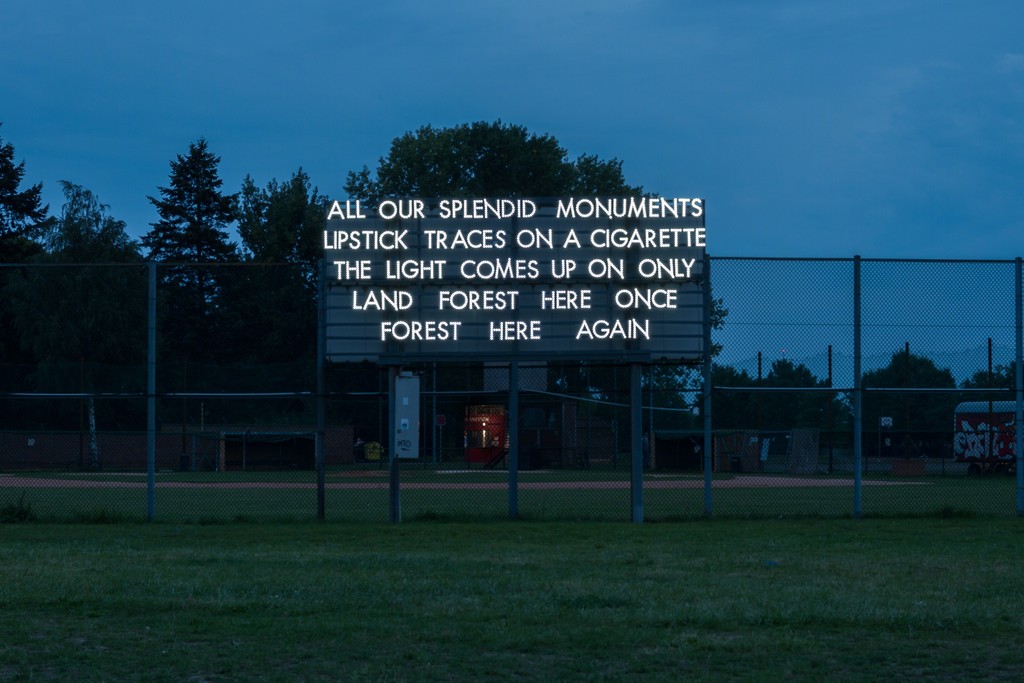 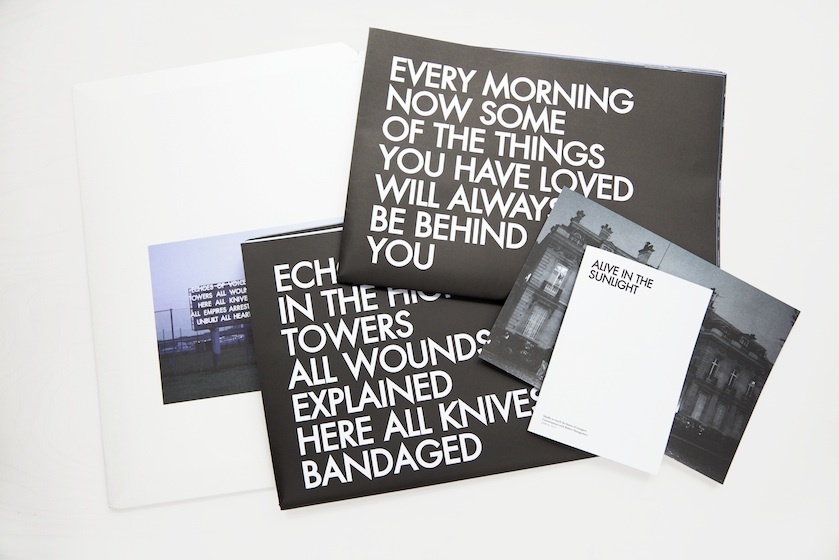 Robert Montgomery works in a post-Situationist tradition, using the medium of verbal language as the central form of expression. He approaches his work as a public inventory of the contemporary mindset; a glance into the way it feels to live at this very moment in time. In his own way of looking at things, Montgomery is often deeply suspicious of a seemingly blind progress. Yet, at the same time, he maintains a thorough belief in the individual’s potential to break free from these structures. His poetic and often melancholic works always affirm and encourage. Never once resorting to irony and so leaving the viewer unclear about where they stand, Montgomerys works take a stance and confront a bleak and alienating zeitgeist with their own vision and version of things: ALL OUR SPLENDID MONUMENTS/LIPSTICK TRACES ON A CIGARETTE/THE LIGHT COMES UP ON ONLY LAND/FOREST HERE ONCE/FOREST HERE AGAIN, exclaims one of the exhibitions central pieces in a refreshingly blunt manner.

It is the wounds of an über-capitalistic modern age that emerge within Montgomery`s works – not only as large and complex societal phenomena but also as deeply personal stories. His texts then seem to be the magical reflection of these stories: a visualisation of things said and thought, a tracing of the memories of spaces, and the people that inhabit them: THERE IS NO HISTORY HERE/WE SEE GHOSTS OF OURSELVES PASS BY ON THE SIDES OF BUSES/AND WE REMEMBER NOTHING, reads one of his works that was published anonymously as an artistic intervention in the magazine Um[laut] in May 2012.

Montgomery`s works are always part of an arcane dialogue that waits for us to carry on. Salient and ghostly messages: white letters on black backgrounds, spread across the surfaces of old billboards and signs – media that normally speaks only to us, yet never with us.

The moment of publicness is central to his works – the direct and often surprising confrontation of audience and work is a focus of Montgomerys artistic project. This idea perhaps finds its strongest expression in the work that Montgomery has created for select magazines, in which he pastes one of his texts across one of the magazines pages. These interventions are published anonymously and without any further information, thus deliberately creating a moment of disruption and leaving the reader with a feeling of uncertainty.

The city of Berlin is one of the main reference points of this new exhibition. The works shown on the disused airport grounds are a direct commentary on the chequered history of the space: a site of an early concentration camp in the 1930s, a military airport during World War II, the iconic Berlin Airlift during the late 1940s and finally the presentation of the area to the general public in 2008. Montgomery understands Berlin as a place of possibilities, a place whose struggle with its own past and future is in many ways symbolic.

The wish to show the largest presentation of his works to date in Berlin is thus to be understood as a substantial decision. Many questions that seem to rise up naturally in Berlin – and especially Berlin – are only ever laced with the more general, seemingly simple question that is always at the heart of Montgomery’s project: How do we want to move on from here – to where? At the centre of the four month long exhibition project were two large light sculptures at the site of the former Tempelhof Airport, as well as over 20 further works that were displayed on advertising billboard spaces across the city.

In a unique collaboration with select magazines, four works by Montgomery have been published anonymously as full page artistic interventions. To conclude the exhibition project, Neue Berliner Räume presented a further selection of Montgomery’s work at Stattbad Wedding in September.