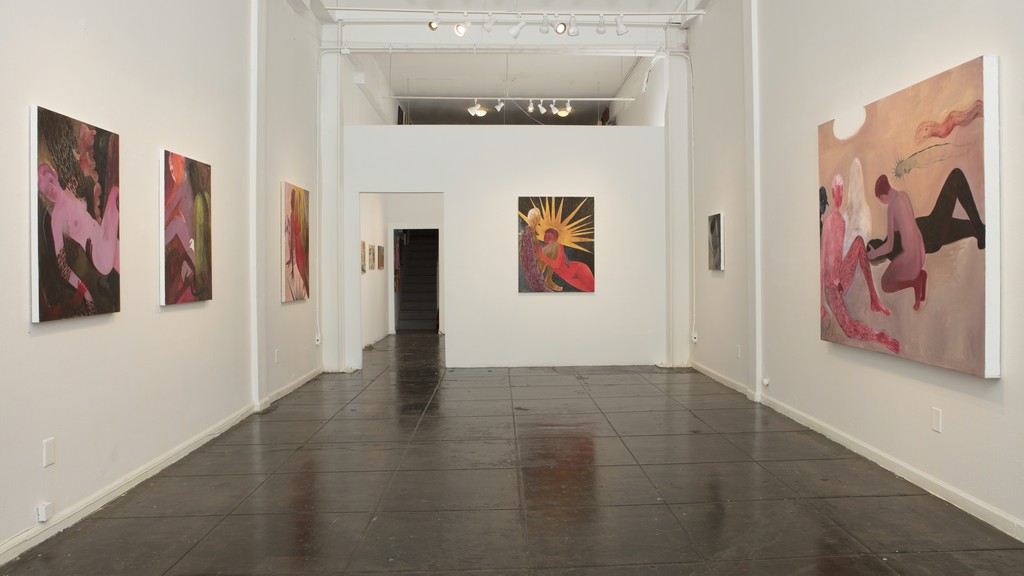 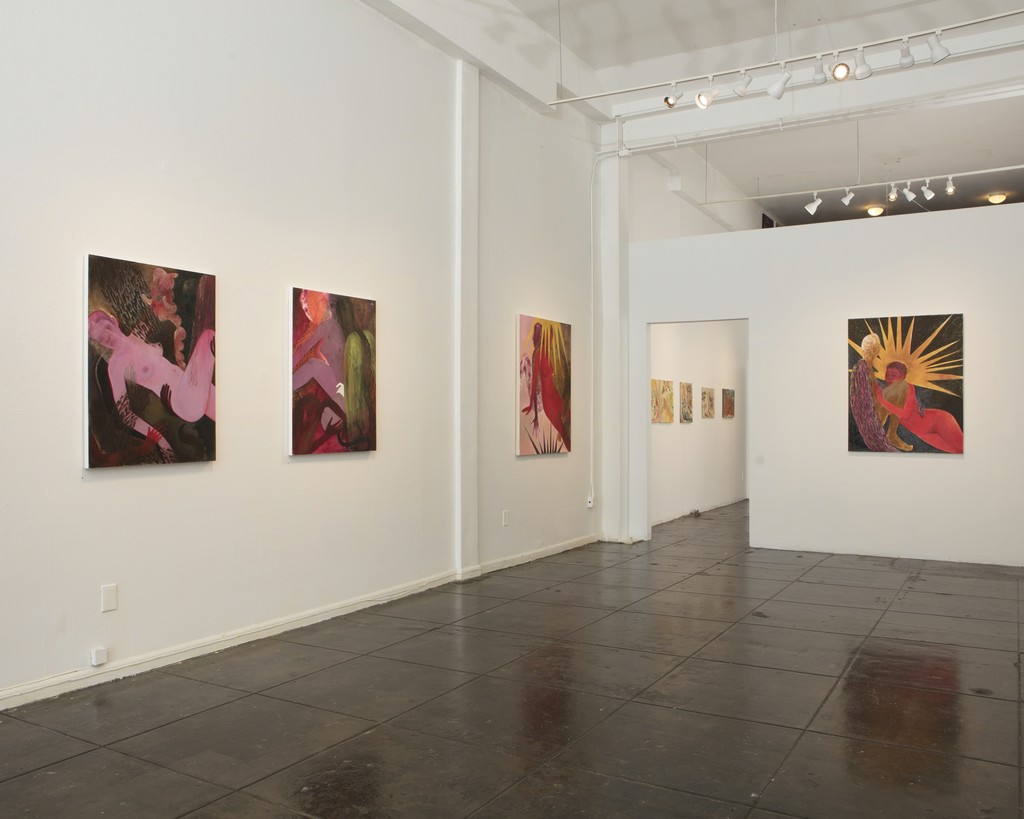 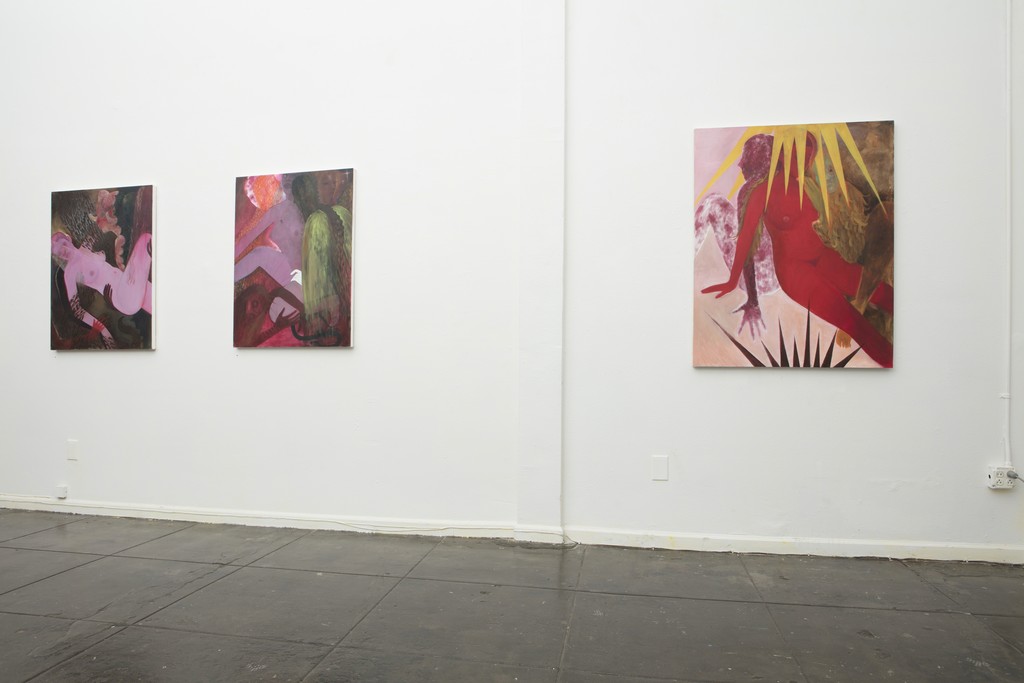 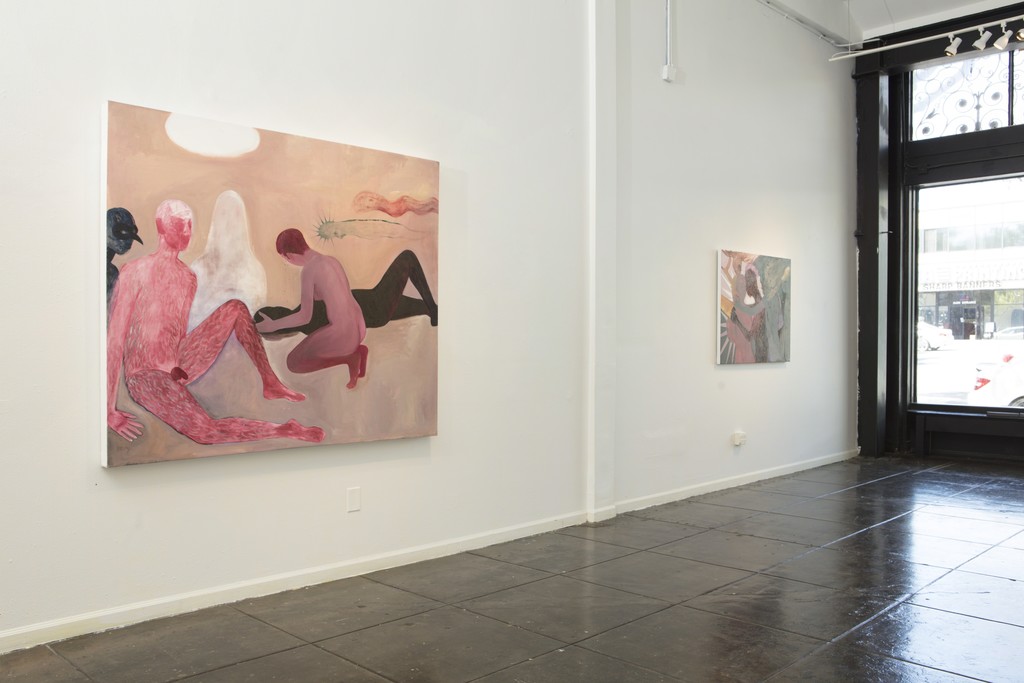 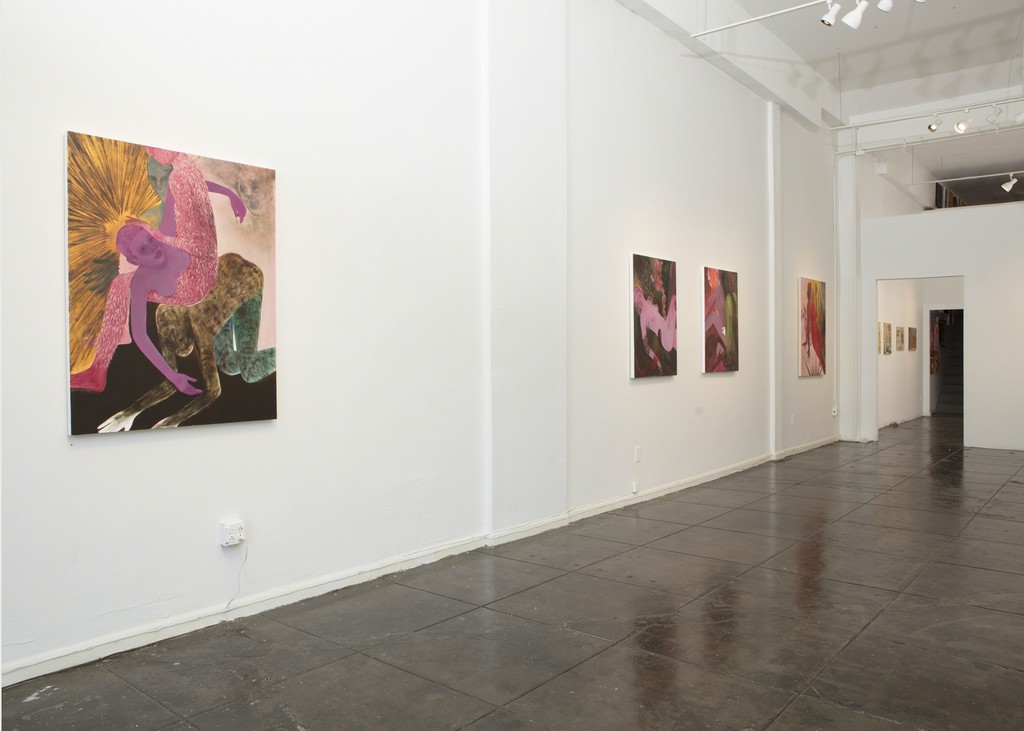 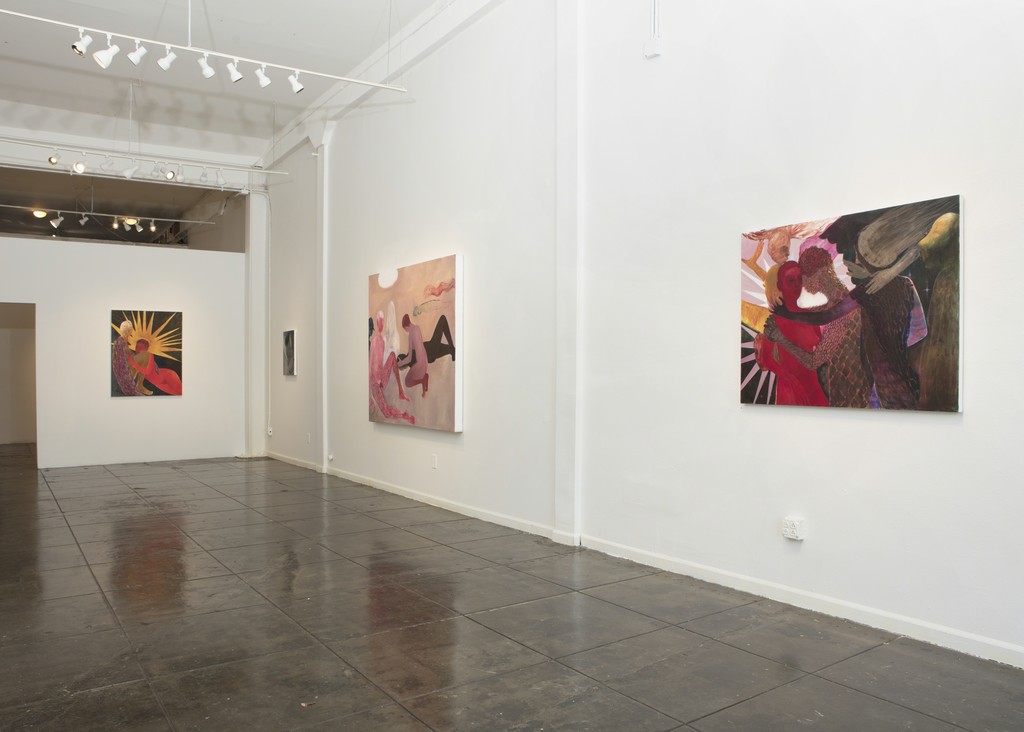 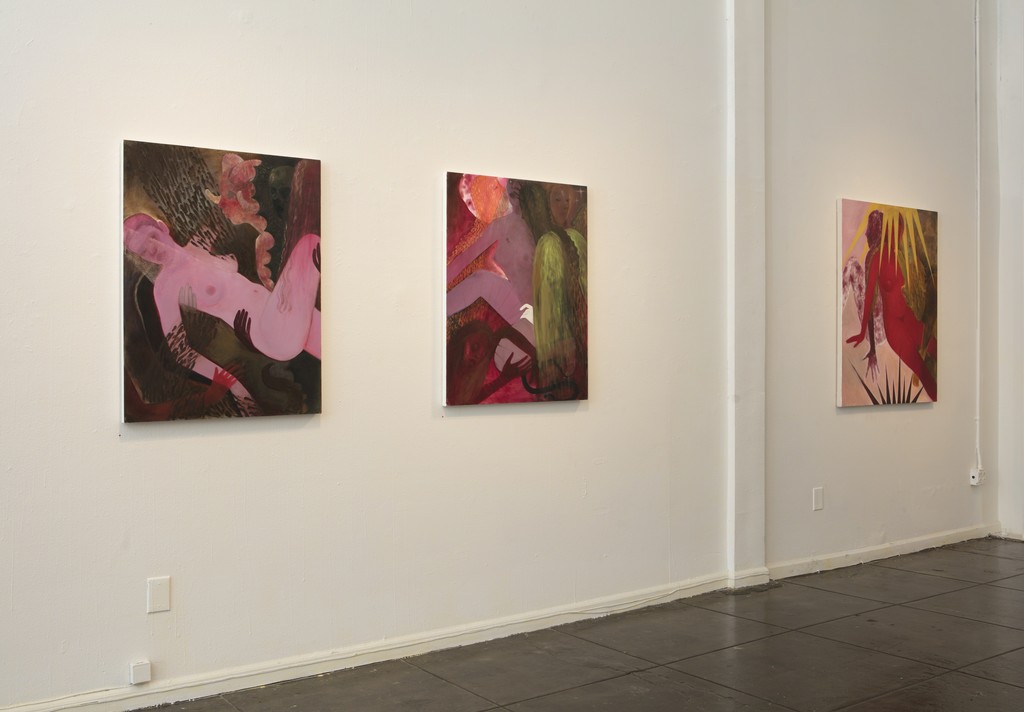 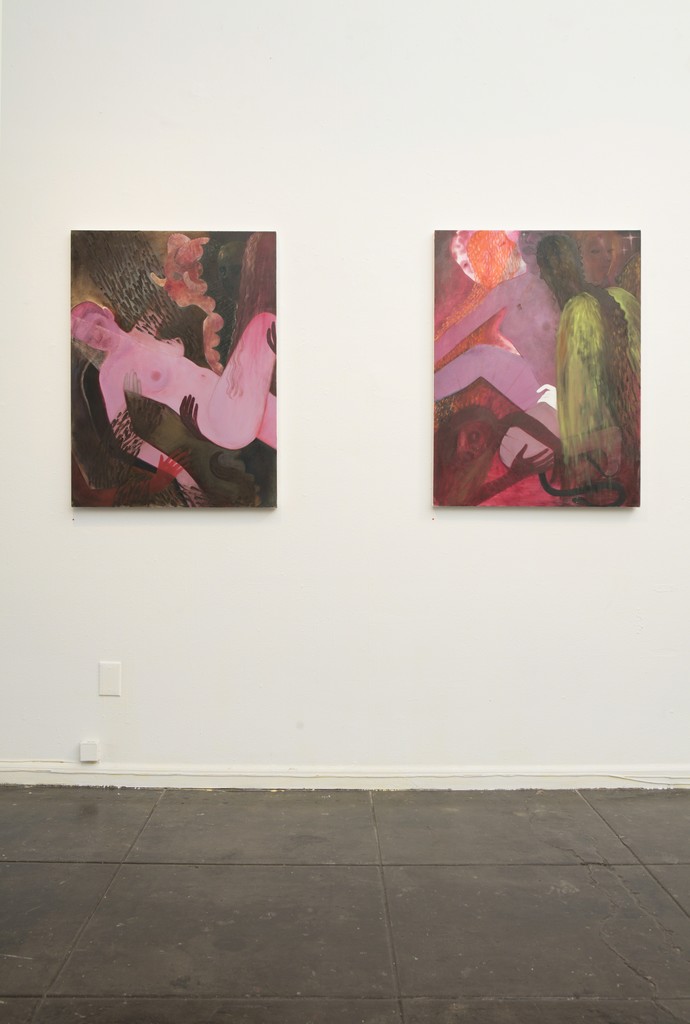 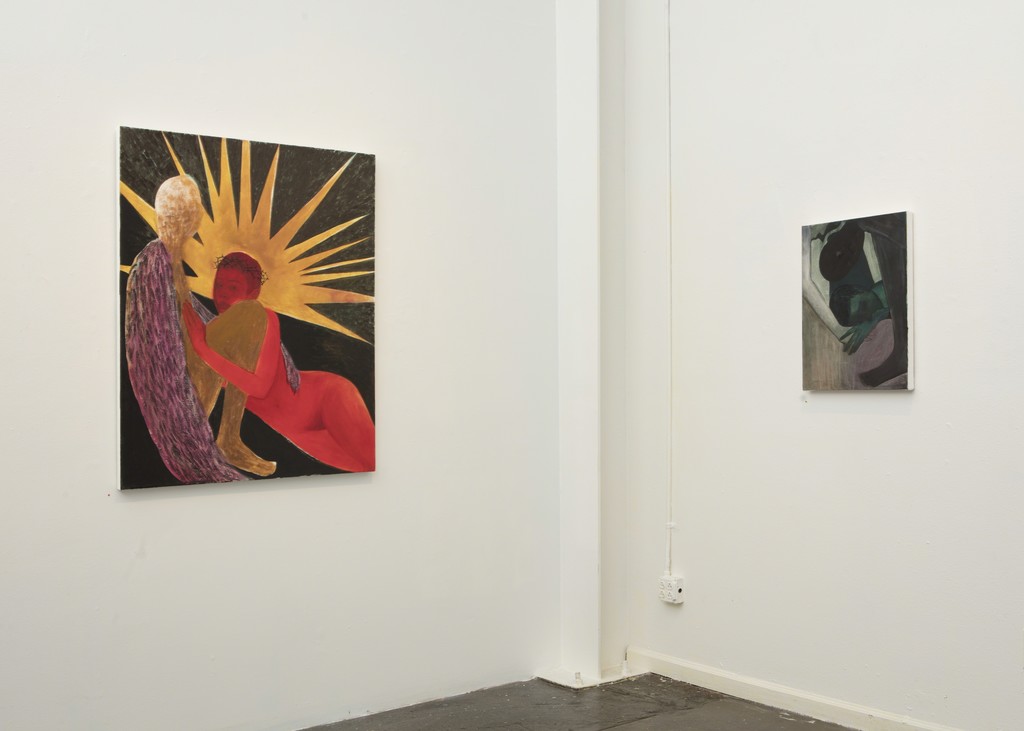 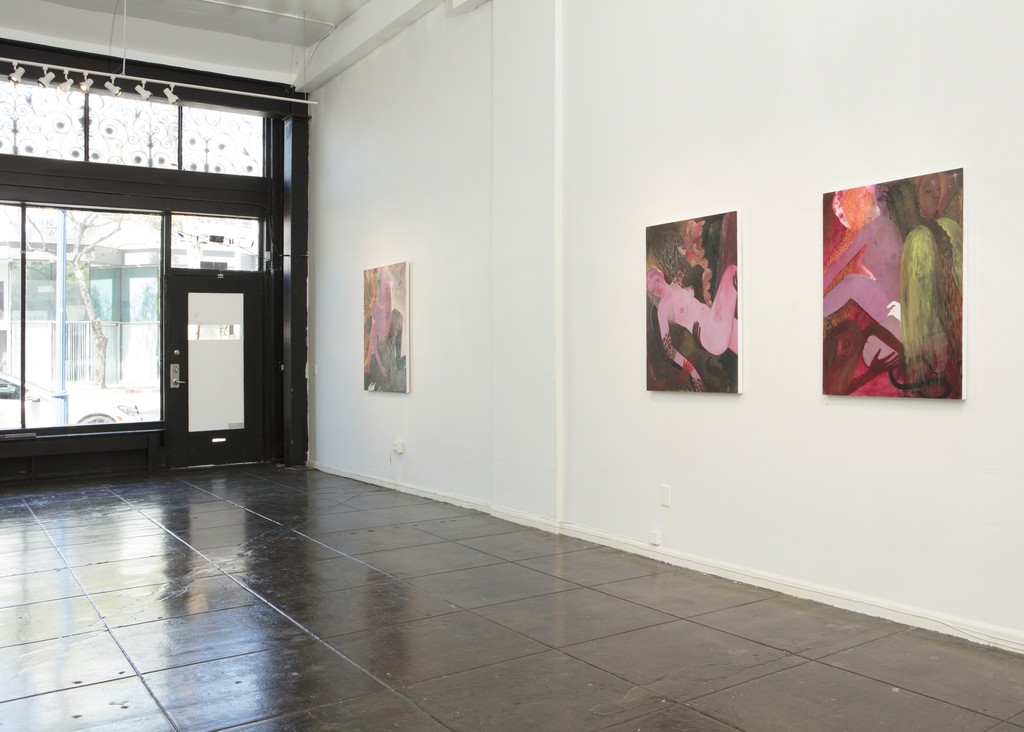 Depicting a strange and mysterious world, Pierre’s paintings cobble together a personal mythology full of characters paused in intimate scenes. The characters within these works play parts in this parallel reality flavored by the influence of Pierre’s puritanical Protestant upbringing. Touch Not My Beloved presents these scenes of protection and affection from a parallel reality, only accessible, the artist believes, through the act of painting.
Born to Haitian immigrants and the child of a minister, Pierre’s Haitian-American cultural experience was heavily woven with fantastical Biblical stories, rife with apocalyptic messages and verbal pictures of otherworldly events. Being disinterested in making a case for or against religion, Pierre’s tableaux seek to investigate something more. With a subtle darkness, she uses symbols of sanctification––like the seven stars often hidden in the paintings or emanating crepuscular rays––to explore the ways in which her personal history was replaced with religion.
Pierre looks back on the Western history of figurative painting, and looks at the grand religious works found in the dominant art historical canon, to draw from a visual language that historically wasn’t hers. Using the rich legacy of oil painting combined with a highly chromatic palette, she immerses herself, her history, and her complexity into this long-standing visual language.

In exploring her existence and creating these painting-portals into another dimension, she is acknowledging all of the history contained within her body. Looking through the unique lens she was given, she is painting not only for herself, but also for those she descended from.

Naudline Pierre (b. 1989, Leomister, MA), currently lives and works in Brooklyn, NY. She holds an MFA from the New York Academy of Art and a BFA from Andrews University. She was the recent recipient of the Terra Foundation for American Art residency in Giverny, France, and the Estèe Lauder Merit Award. Her work has been included in group shows in New York City, Los Angeles, London, and a 2017 solo show at Thierry Goldberg Gallery, New York City.