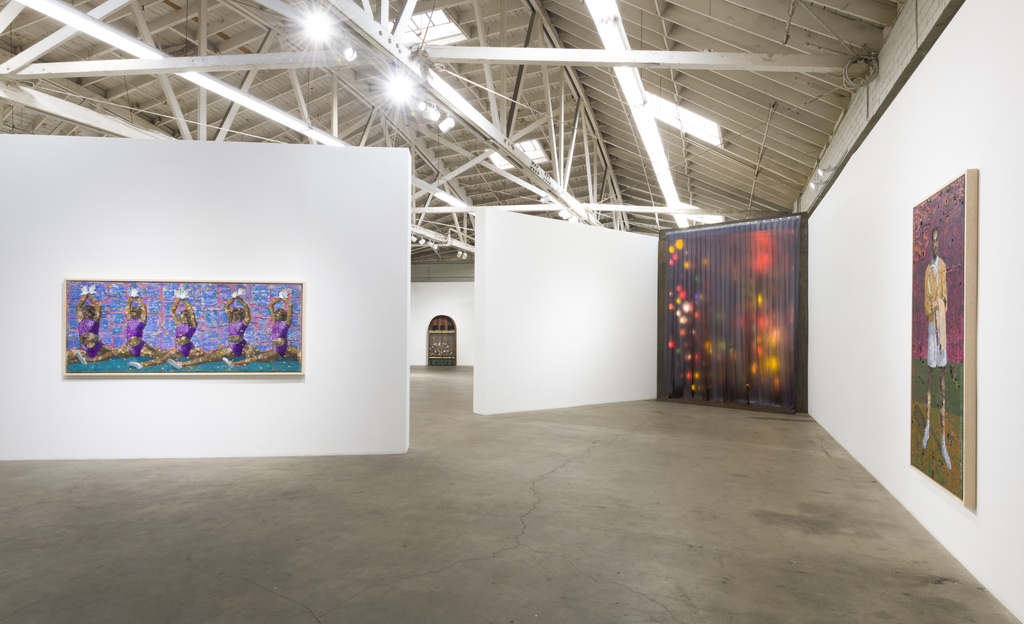 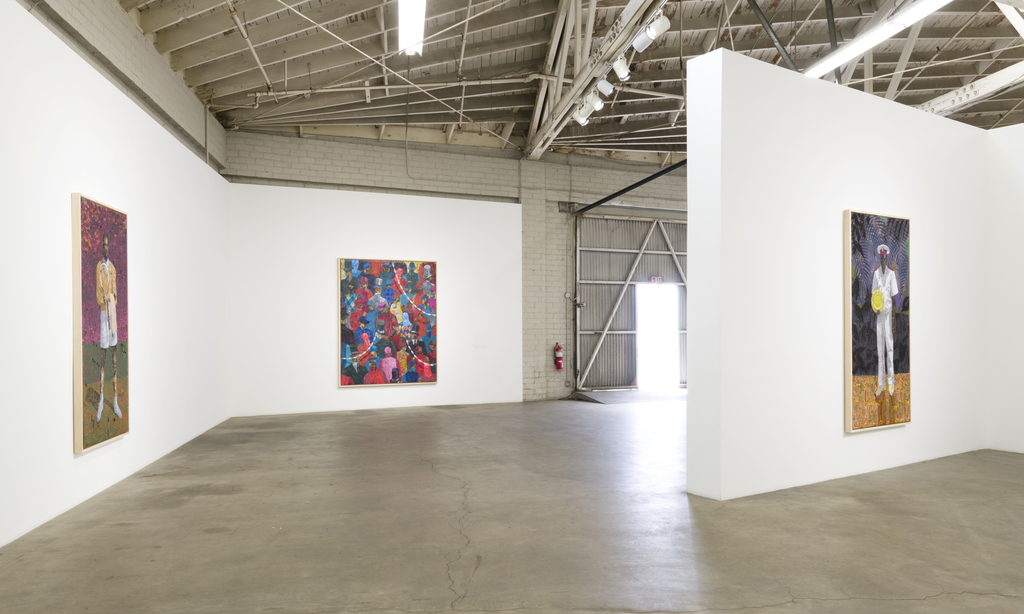 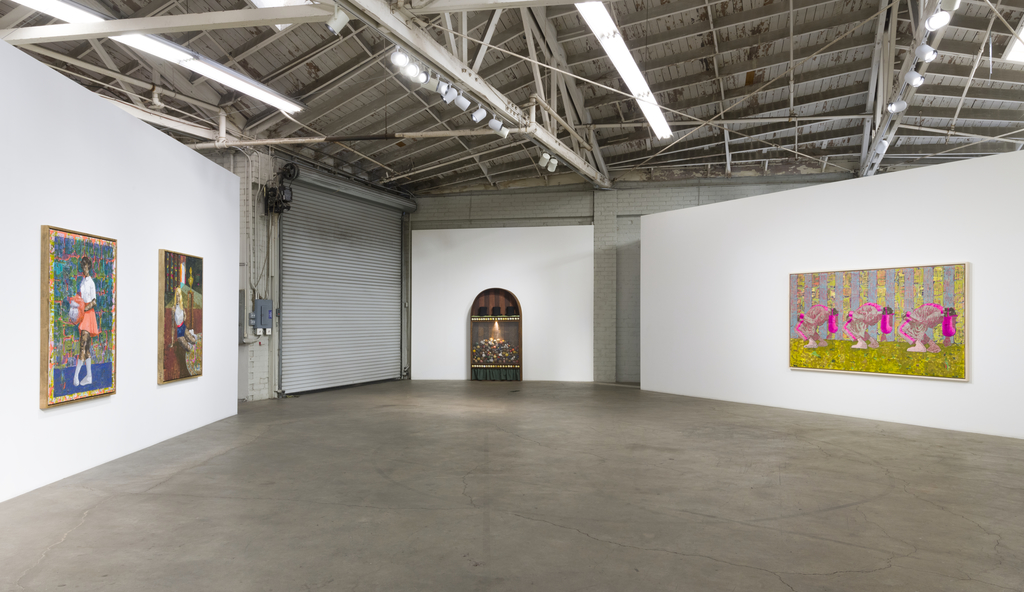 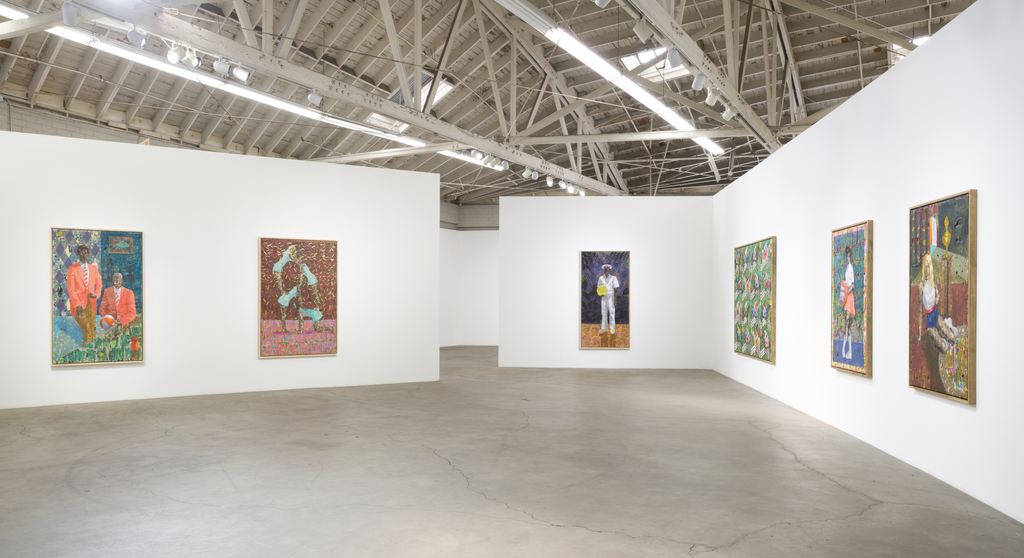 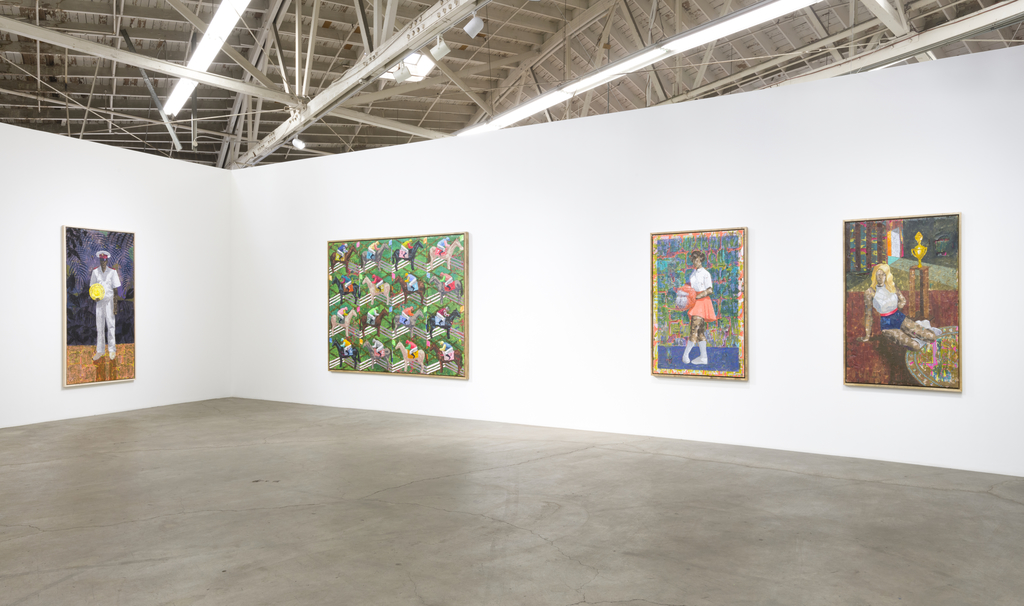 “Every Day some one of us were carried to our last resting, the grave. No humane being can tell… yet we hear. Fate seems to curse a convict.”

Night Gallery is pleased to announce JRRNNYS, a solo exhibition of new paintings and sculptures by Derek Fordjour. The exhibition will run from February 2 through March 2, 2019, with an opening reception on Saturday, February 2, from 7–10pm. This is Fordjour’s first solo exhibition in Los Angeles.

Fordjour’s new paintings advance explorations of earlier works, returning to the subjects of crowds and athletic competitions to illustrate the entrenchment of power relations, capital flows, and racial inequality within the economic and social systems of the United States. “Two Party System,” 2019, is the newest addition to the artist’s recent series of crowd paintings populated by figures arranged in densely packed compositions, their differences rendered in iconographic terms to convey an instantly legible cross-section of society. Here the blues and reds of the figures’ hats could refer just as easily to Democrats and Republicans, to Crips and Bloods, or to athletic rivals. Fordjour also presents a pair of portraits entitled “Worst to Be First,” 2019, which refers to the notion of “firsts” as markers of societal achievement. The works point to exceptionalism, questioning the extent to which pioneering figures are truly able to break down the barriers of long-standing systemic inequality. In the painting “Anderson-Marshall Grooming Salon,” 2019, Fordjour offers his own take on the barbershop painting in homage to forbearers Hurvin Anderson and Kerry James Marshall. Making playful use of the word “salon,” Fordjour points to the cultural potency of the barbershop in daily life as well as art history. Taken together, Fordjour’s lush and textured paintings amount to a comprehensive worldview, shifting scales from the communal to the individual to the pastoral. The exhibition’s title, JRRNNYS, situates this range of perspectives within the realm of the personal voyage, a site of evolution by means of discovery.

The centerpiece of Fordjour’s exhibition is the immersive installation “STOCKROOM Ezekiel.” The work takes its name from the 1884 letters of Ezekiel Archey, an 25-year-old unjustly held as a prisoner sent to labor at the Pratt Coal Mines in Birmingham. Archey’s letters, sent to the Alabama inspector of prisons, are among the most prominent primary-source documentation of the ravages of the convict leasing system, acknowledging the stark preponderance of black prisoners and the gruesome treatment of the laborers by their supervisors. Fordjour’s installation responds to Archey’s letters by creating a walled-in structure comprised of over 1,000 individually constructed compartments – cells, as the artist calls them – painstakingly organized with a variety of found and handmade objects, though by a logic that is never explicated to the viewer. Lights in individual cells blink on and off variously, while small speakers let forth bursts of music by the dictates of a rigid but similarly inscrutable pattern, luring the viewer in the eye-popping manner of the carnival game or game board. The intermittent sounds of music range from the early field recordings of 20th century ethnomusicologist Alan Lomax to 80s- and 90s-era drug dealer anthems to modern day Trap music, a largely Southern genre of hip-hop inspired by the illegal drug trade. The viewer has entered a gamelike arena whose rules remain obscure. With time, the objects that populate the shelves come into focus. Some cells contain familiar items – balls extracted from various sporting contests, the lottery and billiards, cameras, hood ornaments from luxury sports cars, decommissioned prison uniforms, and hundreds of hand blown glass balloons, among others. Others are closed off with metal grating, while still more are lined with the ubiquitous fabrics of luxury designers, invoking the aspirational quests of poverty-stricken urban communities. Finally, many cells contain small busts of the same expressionless figure, molded from resin, copper, metal, plaster, dirt, and salt – materials which stand in for the most prominent products from the era of convict leasing, including the coal mines and steel plants of of Alabama and the molasses distilleries of Florida. Taken individually, the contents of these cells suggest luxury and labor, surveillance and displacement, strategy and competition; as a whole, the work suggests the laws of chance taking place within the confines of a framework that is as unknowable as it is oppressive. From the era of Pig Laws to our current three-strikes mandatory sentencing, educational lotteries to modern day sporting empires, Fordjour’s installation points to the tragic persistence of unjust structures that define American life, employing contemporary commodities while invoking history. At once mournful and flickering with possibility, the installation conjures notions of personal loss and gain within the macro-scale context of the inscrutable systems that have determined the fates of black and brown people through the nation’s history.