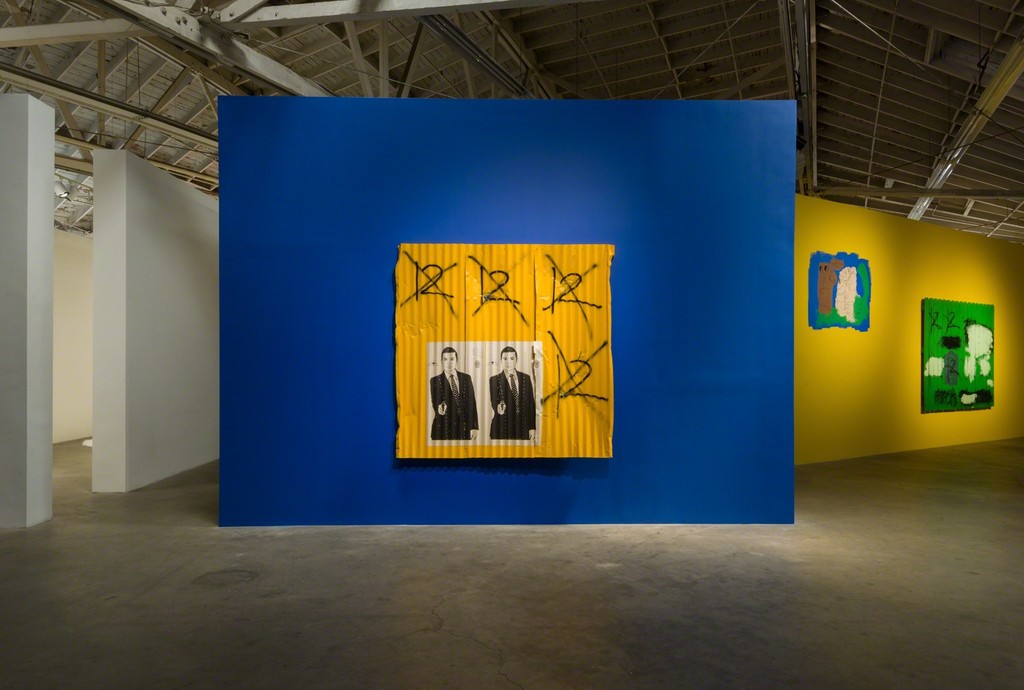 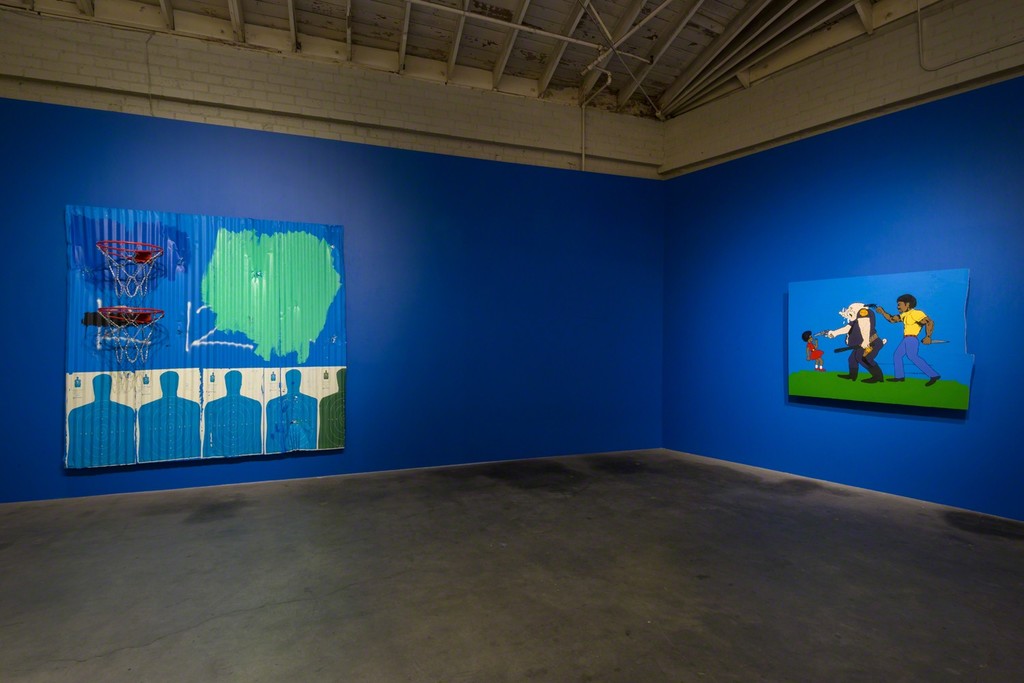 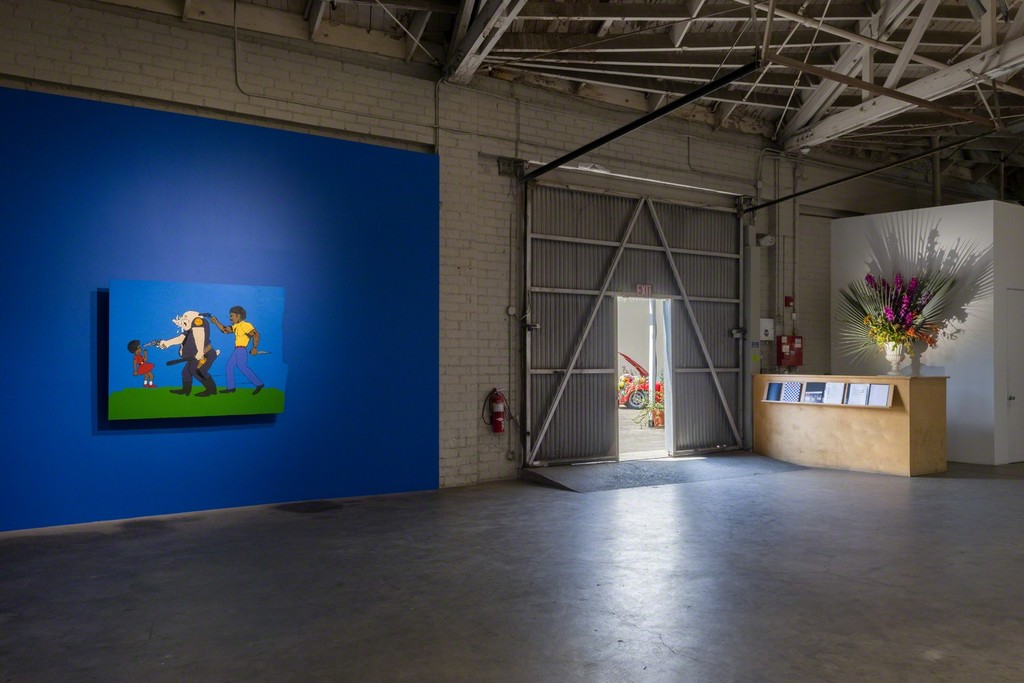 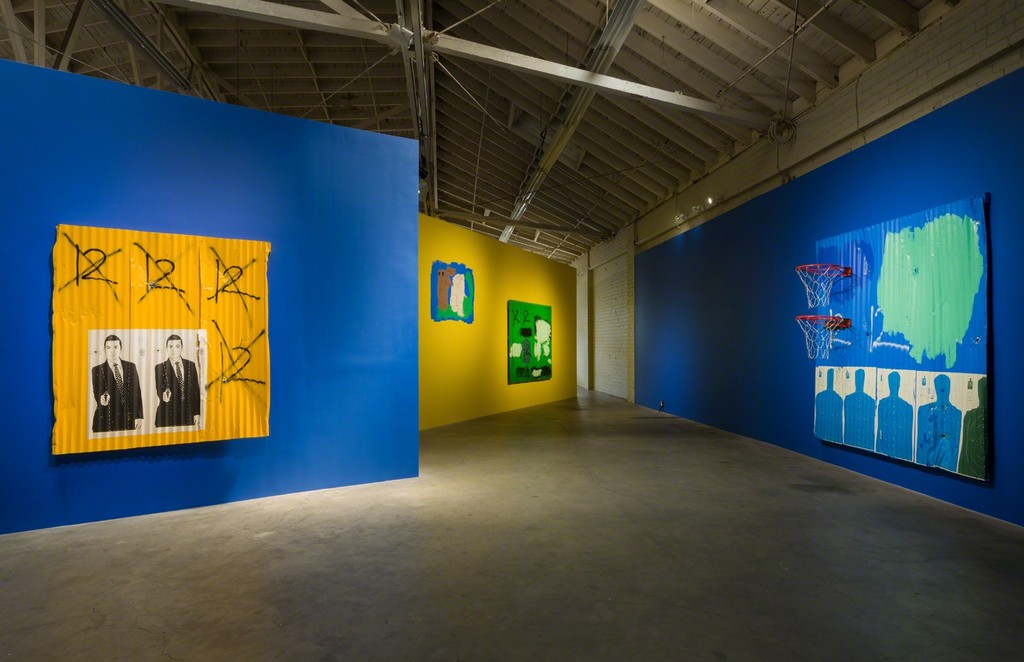 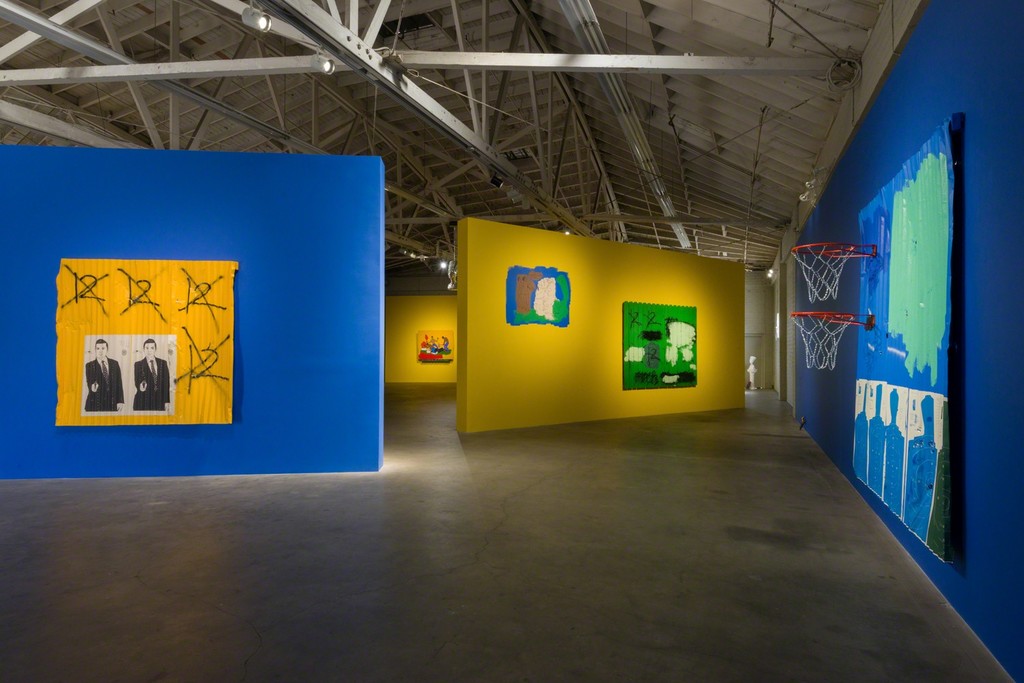 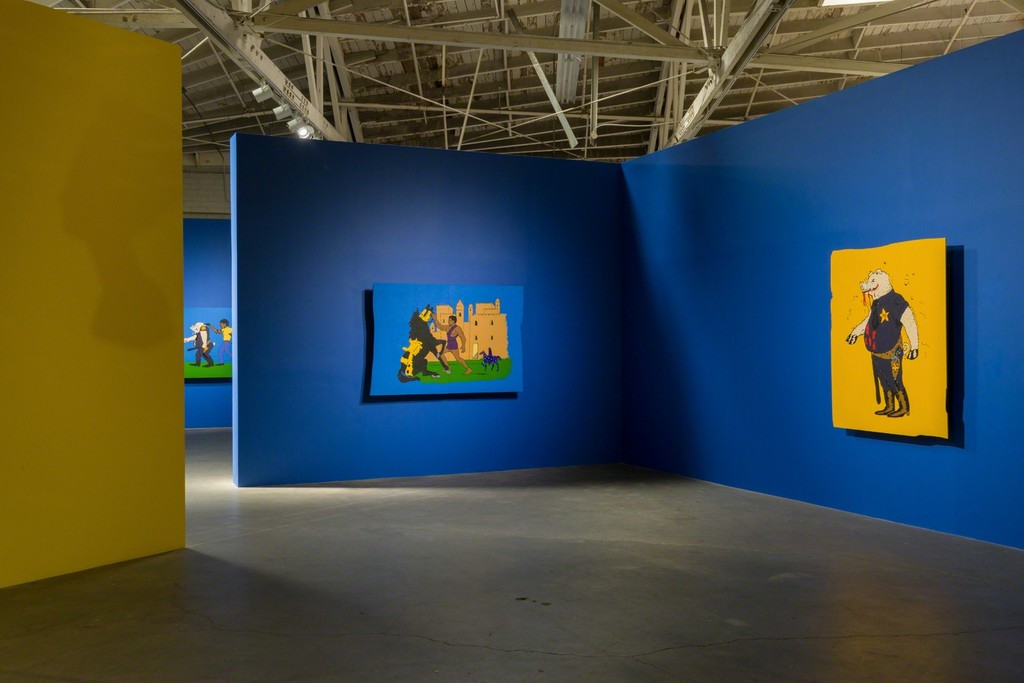 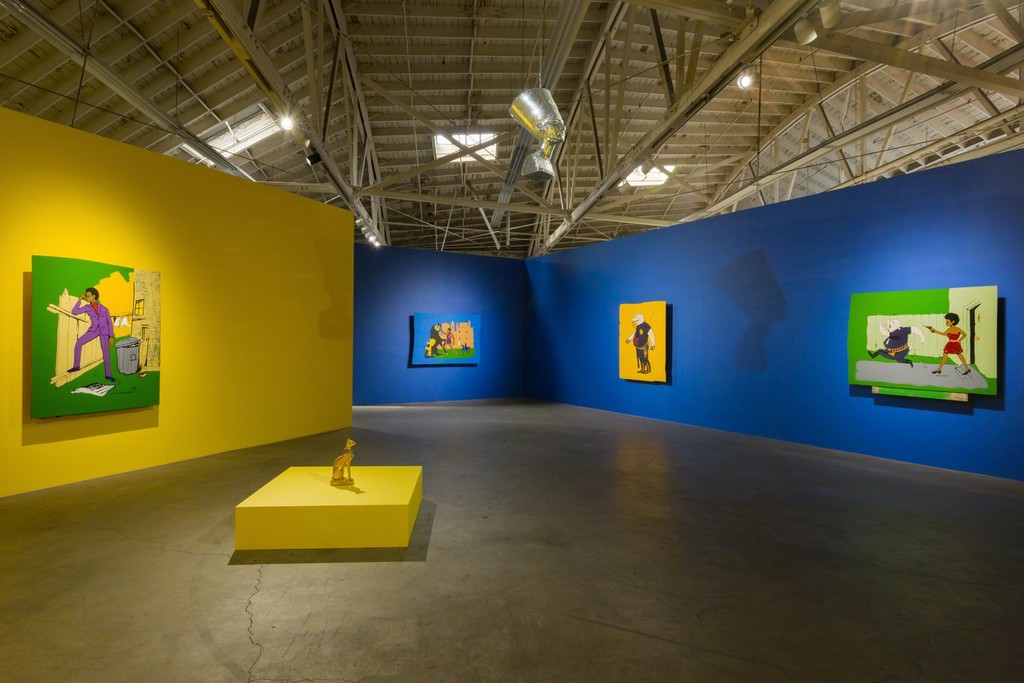 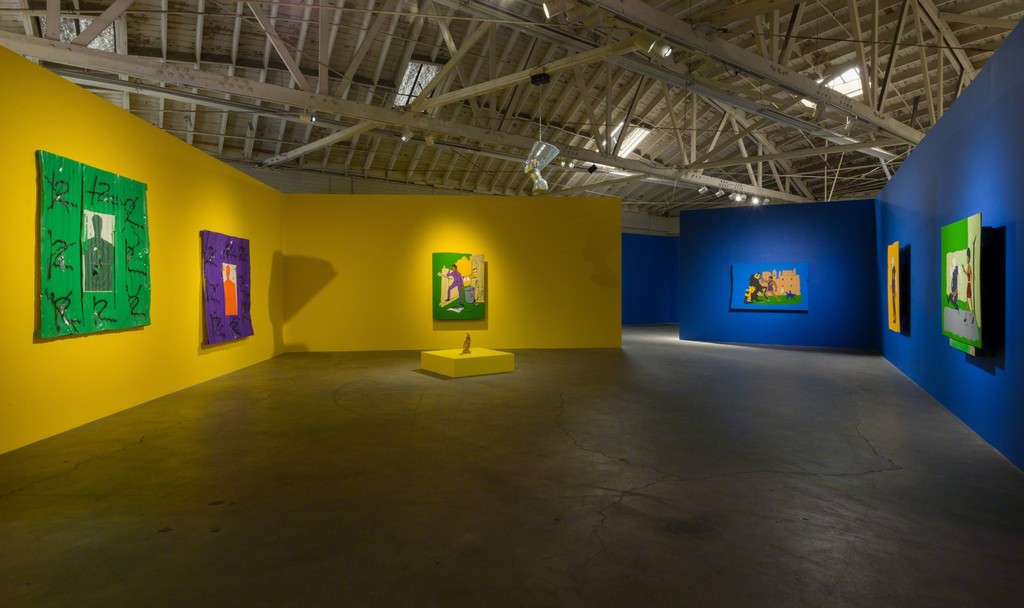 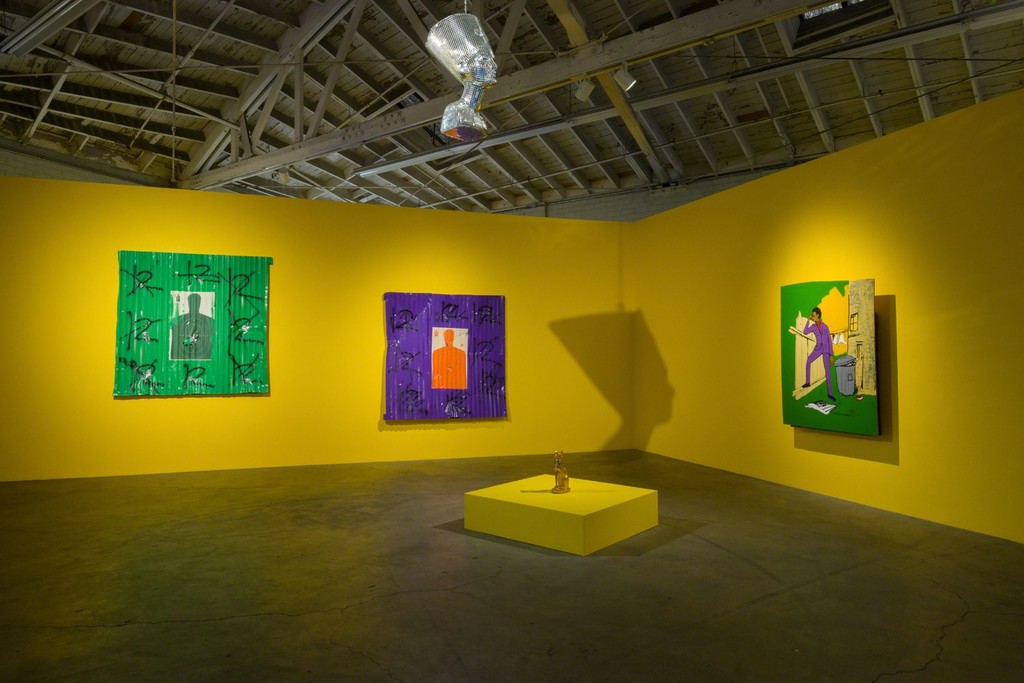 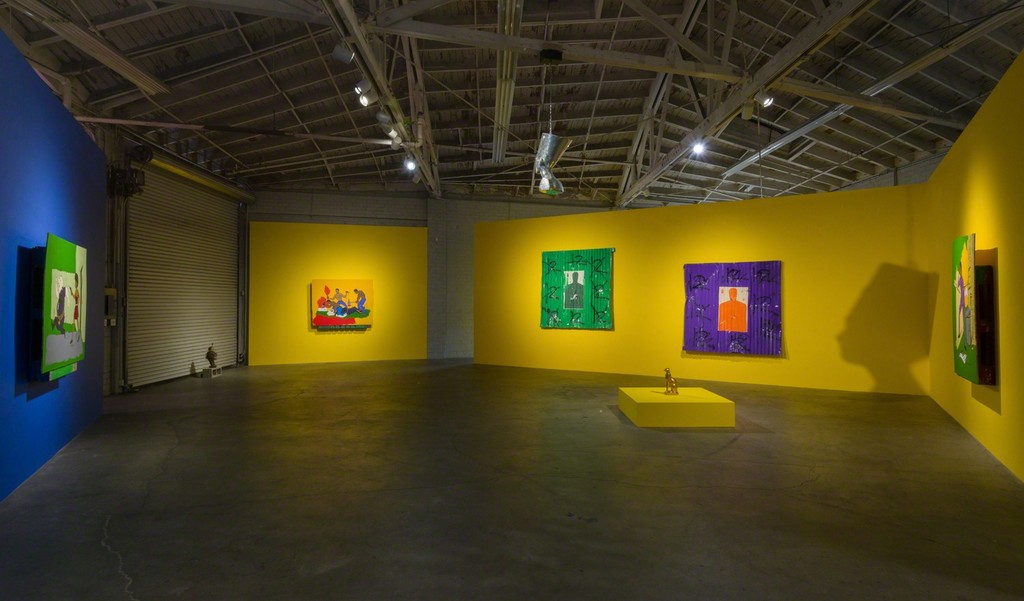 Awol Erizku’s first solo exhibition at Night Gallery collapses America’s history of institutionalized racism, and its counter strategies, from the late 1960s into the future to better understand our political moment. In the first work encountered, two found unpunctured paper targets with carefully rendered features that exemplify the institutionalized white male hold the viewer at gunpoint. The in-tact shooting targets are posted on a bright yellow corrugated metal sheet tagged with crossed-out number twelves referencing street symbols that mark police presence. Other works on corrugated metal are plastered with featureless targets, however, these human shadows are affectively littered with bullet holes. In the tradition of black California assemblage, exemplified by Noah Purifoy, Betye Saar, and David Hammons, Erizku’s paintings are heavily sculptural using corrugated metal, plastic sheets, plywood, and palates to denounce Euro-centric painting standards of working on the smooth white surface of gessoed canvases. In the main gallery, Erizku displays a new series of works on assembled plywood and pallets that are screen-printed and colorfully “painted in” images pulled from the storied “Black Panther Coloring Book”.

In 1968 James Teemer, an aspiring recruit for the Panthers’ Sacramento chapter, was eager to impress the Party’s Central Committee with his sketches for a children’s coloring book. Upon review, the committee found the book’s content inappropriate to represent the party and not suitable for publication. 1 Bobby Seale, then Party chairman, instructed the coloring book and all copies be destroyed. Not long after in 1969 party defector Larry Clayton Powell, first a Panther informer for local police then later for the FBI, quietly printed 1,000 unauthorized copies of the coloring book and distributed widely in white suburbs. 2 The FBI's Counter Intelligence Program tarnished the image of black America and violated the civil rights of The Black Panther Party. This strategy was in direct accord with the deeply institutionalized motives of Nixon’s “Southern Strategy” aimed to ignite racism in white Americans to win votes and deny the legitimate grievances of black Americans. Moreover, it was FBI director J. Edgar Hoover’s declaration of the Black Panther Party as America’s number one terrorist group that inspired every strategy imaginable to discredit, jail, take as an informant, or kill black people to neutralize any power accrued.

With the coloring book’s gaps, background, and features colored in by Erizku, the drawings come closer and invade our contemporary space with their scale and color. In some paintings violent scenes of people beat to death cops represented as flea ridden pigs. Now split apart from one another as paintings, the complexity of the coloring book images emerge. In more discreet pages there is pride and empathy to be felt to see images of black communities controlling ownership of their bodies, homes, and communities. In a particularly violent painting, a pig-rendered cop is attacked by a group of men, with one man having a crossed out twelve tattooed on his chest. This minor anachronistic detail gives rise to a much larger notion of Afrofuturism within the exhibition, signifying a broken past, dubious present, and hopeful future. The gallery is awash with a palette of colors that further confuse where objects, such as fences, exist both in space and in the enlarged coloring book pages. In building his vernacular, Erizku samples and resamples paint colors as a visual strategy, as Kevin Young has put forward “to sample oneself is to participate in the oral tradition.” 3 The gallery is atmospheric and Erizku treats the exhibition as an object - a holistic site of inquiry. The artist moves with agility between nonhierarchical

platforms within Menace II Society such as creating a mix-tape to multiply and democratize art’s dissemination while looping back American culture as a reflexive site. Erizku improvises with contemporary tools at hand and puts together his exhibitions in alignment with Fred Moten’s description of black performance as “the ongoing improvisation of a kind of lyricism of the surplus-invagination, rupture, collision, augmentation It’s an erotics of the cut, submerged in the broken, breaking, space-time of an improvisation. Blurred, dying life; liberatory, improvisatory, damaged love; freedom drive.” 4

California in the late 60s during the aftermath of the Watts Riots and continued Civil Rights Movement was the backdrop to the Black Panthers Coloring Book. Social, political, and economic changes drew transplants to Los Angeles from around the country. Black Californians imagined a new, expansive, and experimental place antithetical to the Antebellum South. From 1967-89 a group of art students at UCLA created, archived, and mentored a collective known as the LA Rebellion, building a unique and shared landscape of the black Californian experience. Despite the hope the West has historically brought to American imaginations, the founding institutions of the country, it economics, its law, its education, its history, are designed to exclude and oppress the black experience. Police brutality proved equally brutal on the West Coast. A nation founded and fueled on human rights violations of enslavement encodes itself today as mass incarnation, murder sentences without trial, poverty, debt, denied rights to assemble, unequal care of communities, and so on. While hate groups have prevailed, the painful schism between rhetoric of equality and justice and lived reality has defined
black and American culture as synonymous. As histories emerge, we know that not anew, institutionalized racism has never left. With this in mind, Erizku thrives in the process-based unfolding of metaphors in the unfinished quality of politics, life, and art in the now.