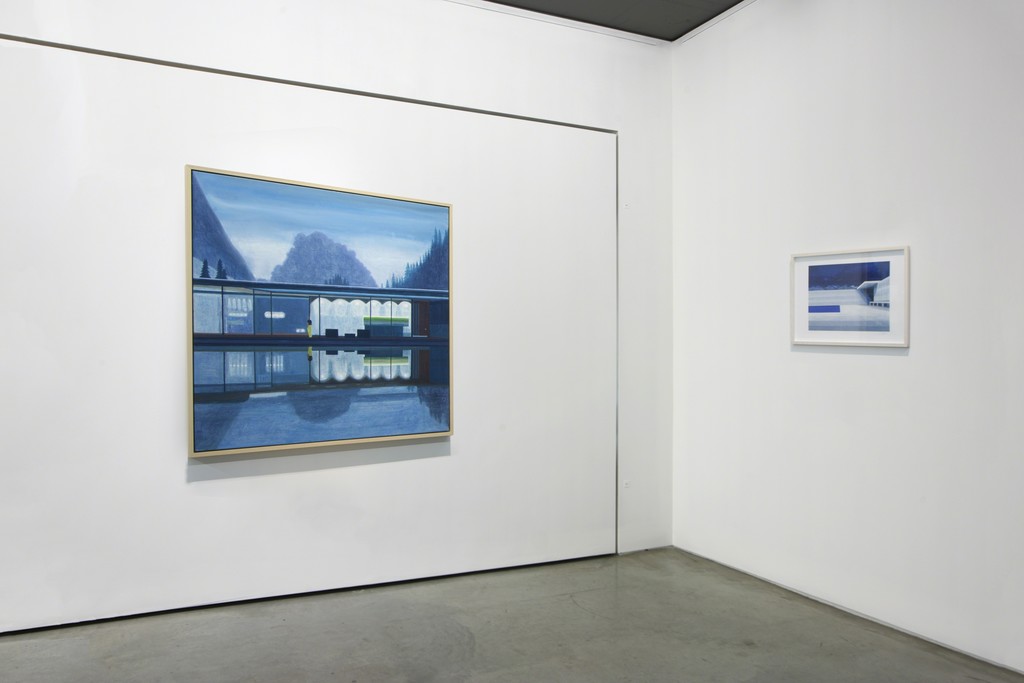 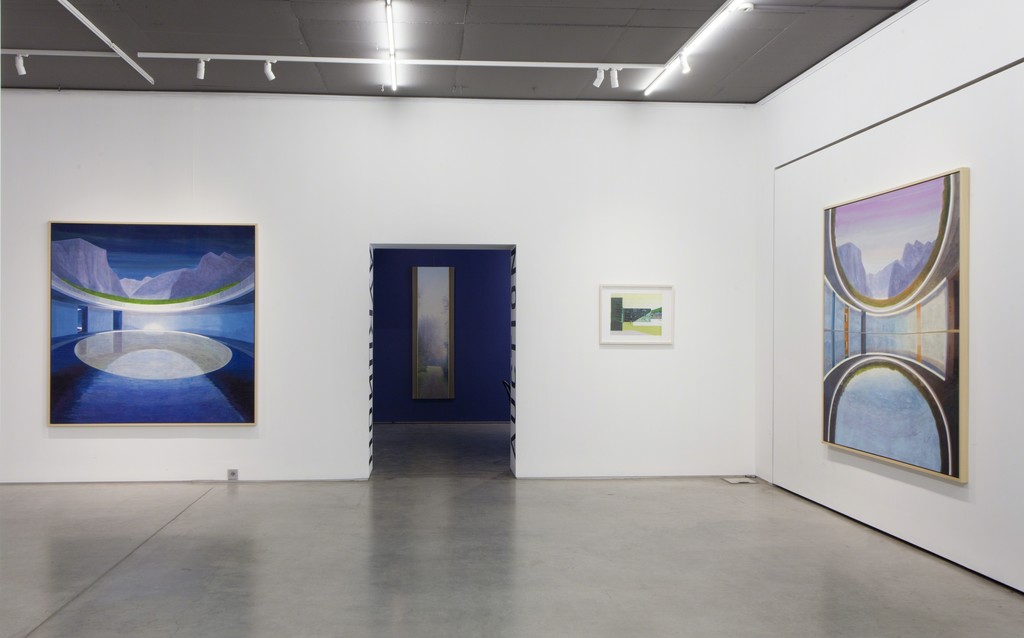 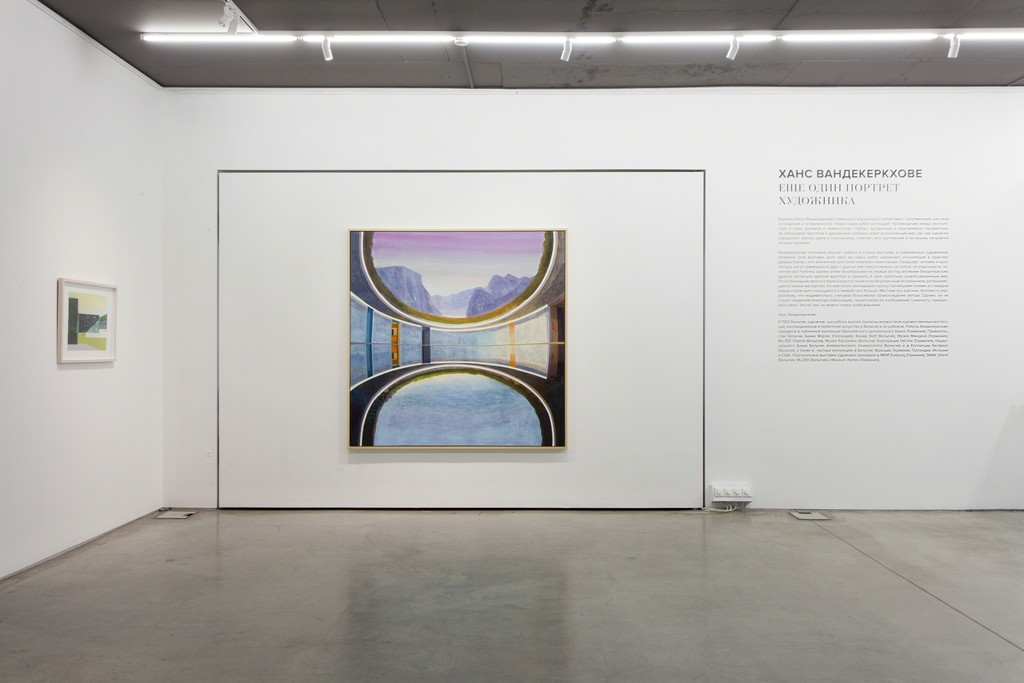 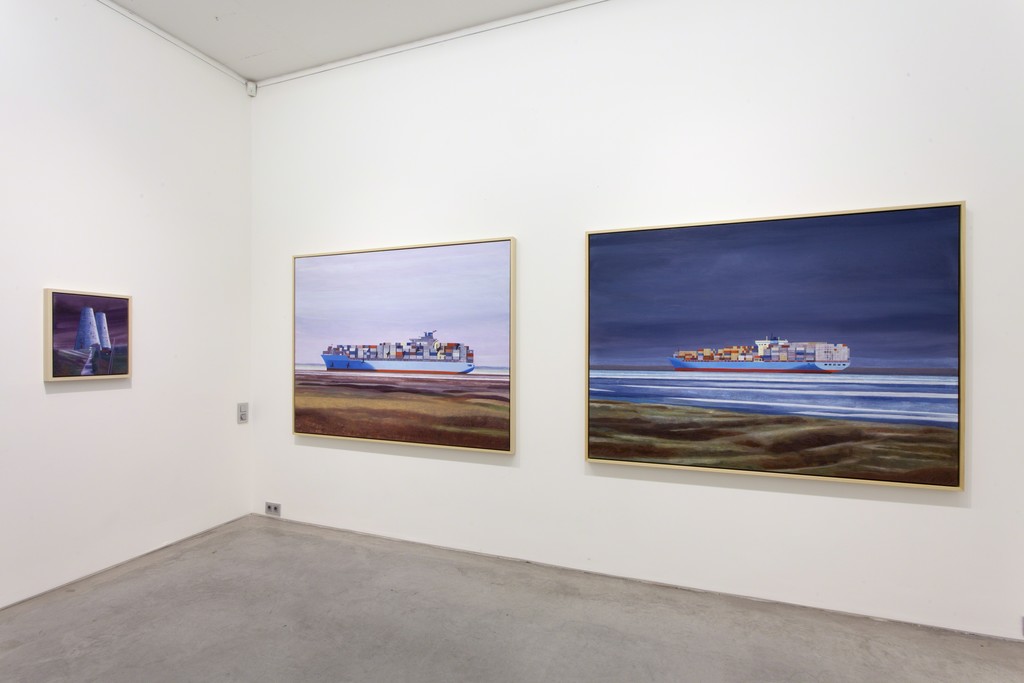 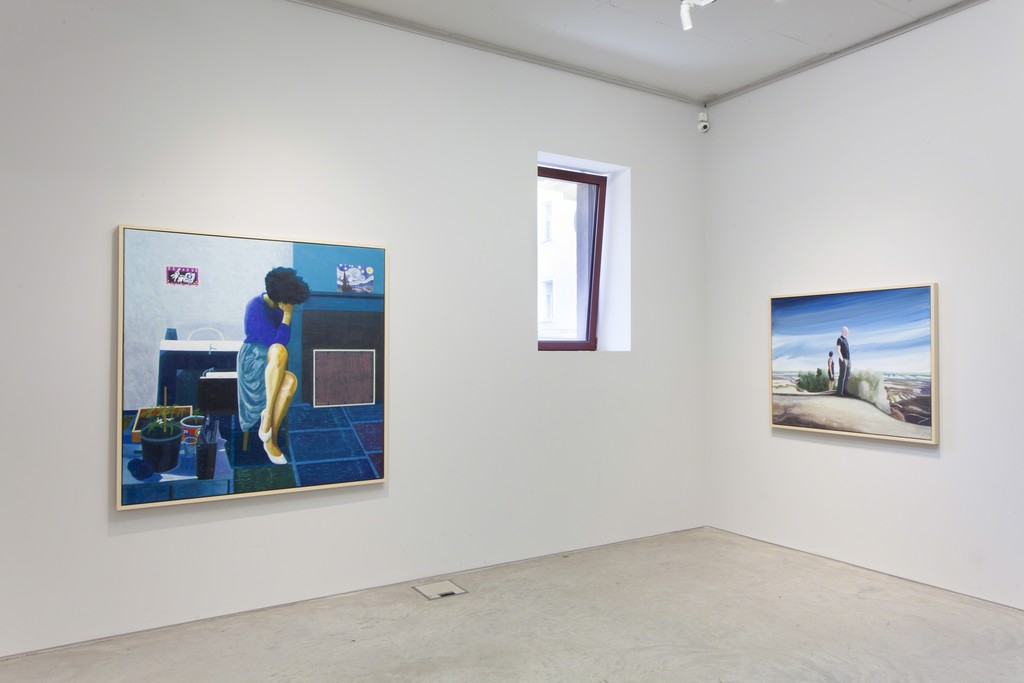 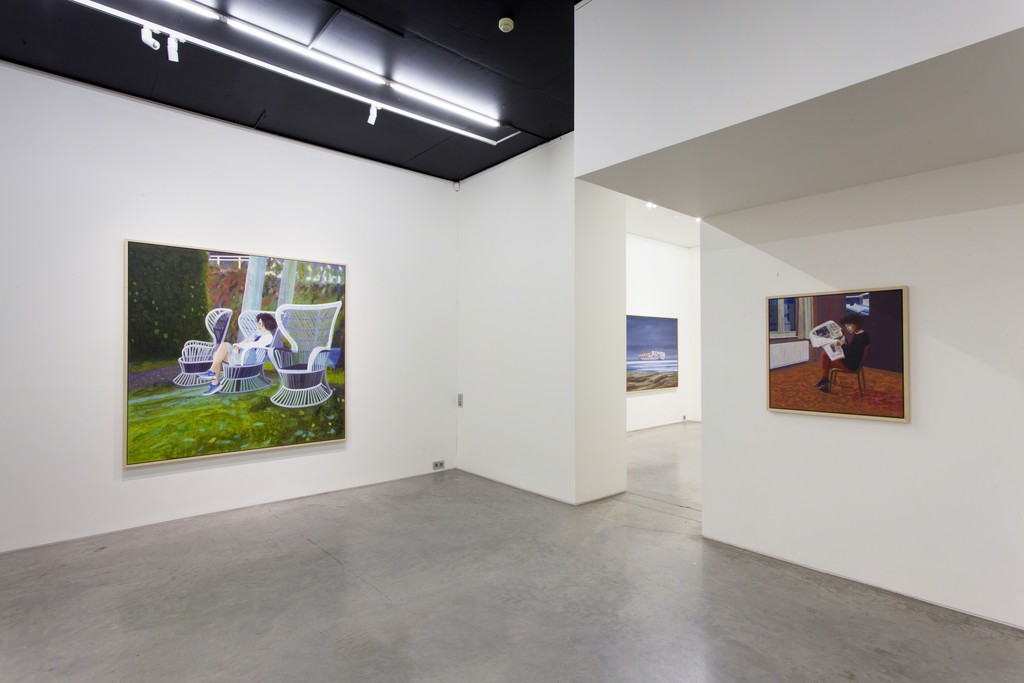 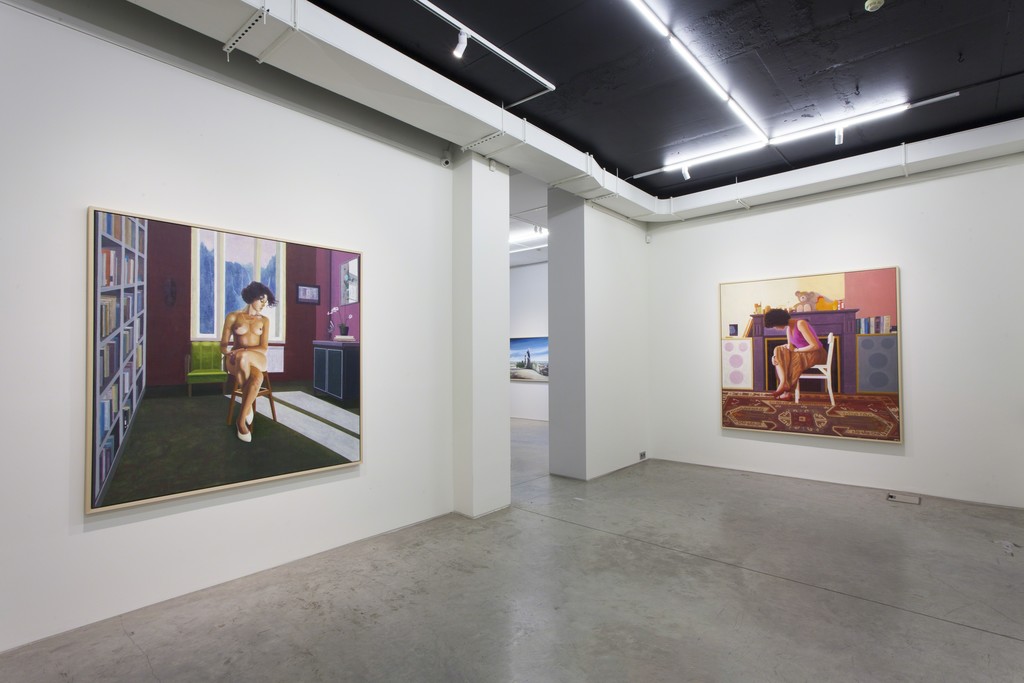 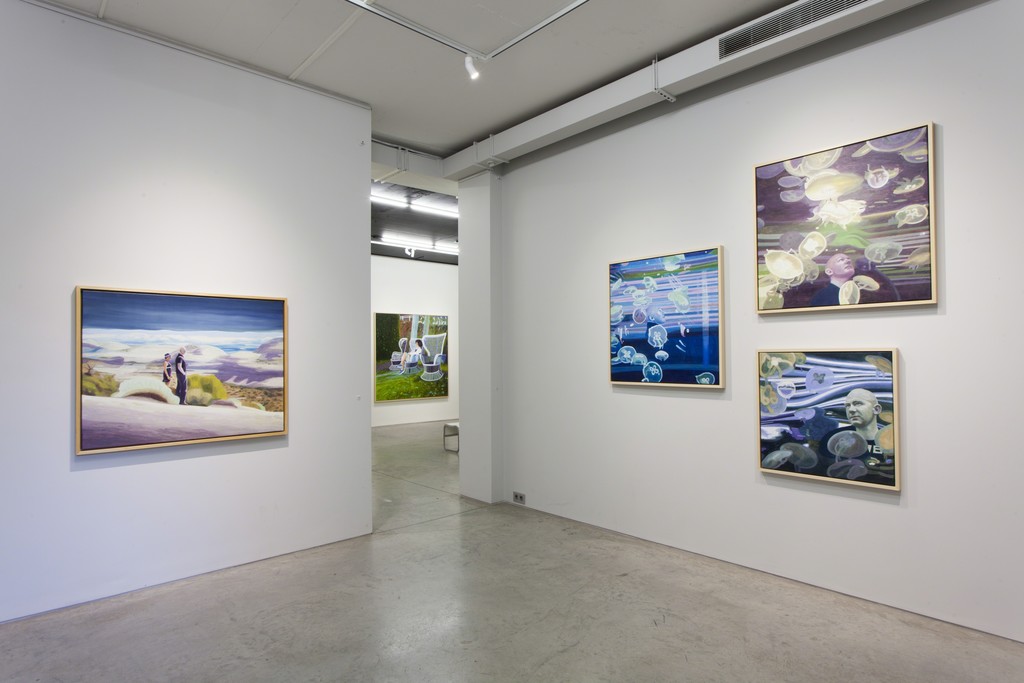 The paintings of Hans Vandekerckhove (Belgium, 1957) combine tranquility with an alienating sense of tension and desolation. It embodies a wealth of contradictions in a unique way, mingling dream and reality, eroticism and innocence, the soberly factual and the deeply enigmatic. An elusive, mysterious and wonderful world lies concealed beneath the deceptive simplicity and outlandish colours. In his work, gravity is not present and time passes differently for it is the artist himself who determines the laws of paint, colour and perspective.
The title of the exhibition refers to a recent painting Vandekerckhove made as an homage to David Hockney. Throughout his life, Vandekerckhove has studied the work of both old masters and contemporary international artists. With Hockney in particular there was a recognition in the simplicity of subject matter and composition. Landscapes, trees, (self) portraits, architectural structures; often these moods are depicted separately, filling the canvas on their own, other times they are combined in one painting. With these, at first glance, harmless themes, Vandekerckhove manages to catch the spectator off guard, luring them into a world he very meticulously orchestrated. This, almost banal simplicity is countered by the technical aspects of the paintings, which reveal Vandekerckhove’s true craftsmanship. By economically adding new layers of paint, the works are lifted into existence and become denser with each new veil. At times, Vandekerckhove’s works lean towards surrealism, an aspect which is probably ingrained in his being Belgian. Yet, rather than depicting a surreal composition, his works are covered in a psychedelic light. Instead of showing the spectator an unrealistic dreamworld, Vandekerckhove decides to show the realistic one, very close to the moment of awakening.
Hans Vandekerckhove can be considered as a full-blooded painter. His works are highly appreciated by institutions, collectors, fellow-artists and art enthusiasts both in Belgium and abroad. Public collections who purchased his works include The Central Bank of Europe (GE), Belfius Art Collection(BE), Flemish Government (BE), Fortis Bank and Insurances (NL/SP), The Phoebus Foundation (BE), Museum Minden (GE), Mu.ZEE Ostend (BE), Museum Kortrijk (BE), Nestlé (GE), National Bank of Belgium (BE) and University of Antwerp (BE). Also, his paintings are part of private collections in Belgium, France, Germany, The Netherlands, Spain and the US. Vandekerckhove has had solo exhibitions in European museums such as MKM Duisburg (GE), SMAK Ghent (BE), Mu.ZEE (BE) and Museum Xanten (GE).  Throughout his career, Vandekerckhove has had numerous solo exhibitions both in galleries and museums. A selection of works from his latests solo exhibition ‘The Christina Paintings’ (2017) will feature in the exhibition at ART4.