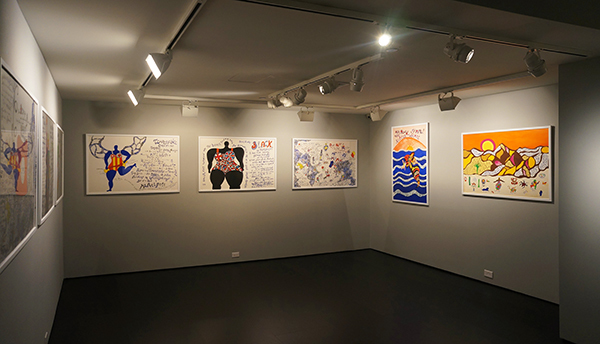 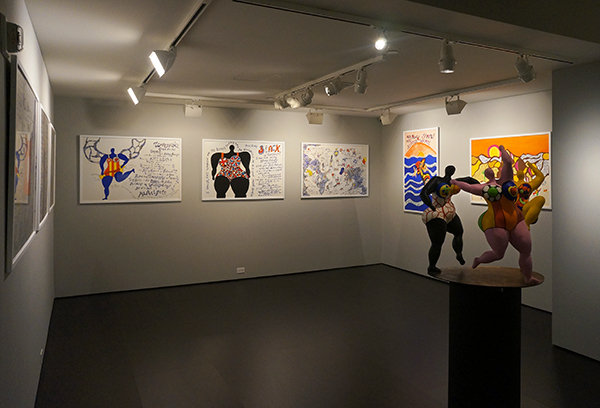 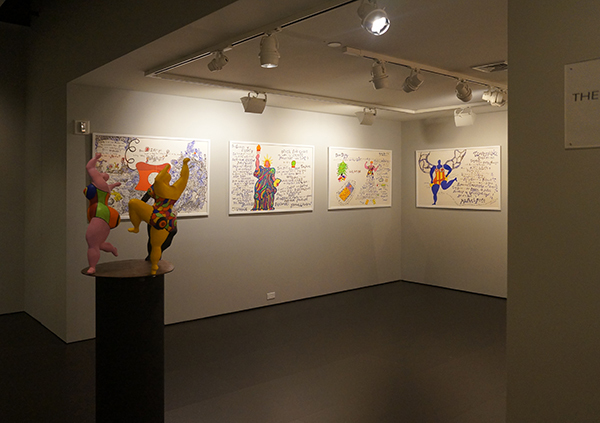 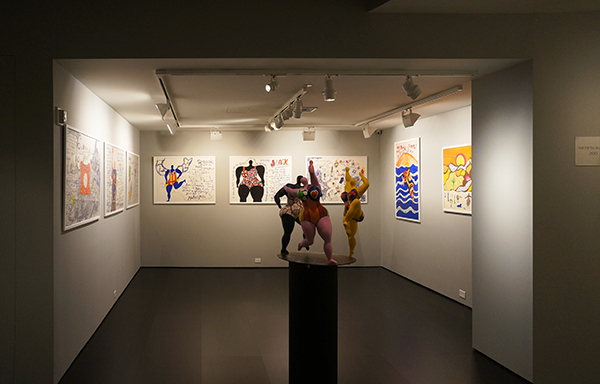 Niki de Saint Phalle’s CALIFORNIAN DIARY will be on view at Nohra Haime Gallery from August 4th to September 5th, 2015.

Considered one of the most preeminent female artists of the 20th Century, Niki de Saint Phalle’s work is intimately linked to California, her home for almost a decade until her death in 2002. This exhibition of nine silkscreens visually records her experiences on the West Coast. In them, Saint Phalle expressed philosophical, socio-critical and intimate thoughts in a colorful, non-threatening format, something she had done with the MY LOVE series in the late 60's, a universal love letter with a similar doodles and calligraphy.

In 1962, Saint Phalle traveled to California with Jean Tinguely where they visited Simon Rodilla’s Watts Tower near LA to organize a happening in Nevada. In 1963, she staged her first revolutionary Shooting Paintings, as a result of performances in which she shot a 22-caliber rifle at plaster works embedded with bags of paint, causing them to explode and cover the surface with color. This aggressive gesture, a sort of psychoanalytical maneuver to deal with personal issues, was the first of many groundbreaking and intense messages that would shape the perception of our contemporary world through her work. After the Shooting Paintings, she developed an interest in the roles of women in society and created her first NANAS. These voluptuous female figures made of polyester served to discuss the ideal archetype for women in the 60’s. They can be seen in cities and museums all over the world.

During the late 70’s, Saint Phalle stayed in Malibu for a couple of months, working on ideas for her architectural fantasies. Captivated by the light and landscapes of California, she created SUN GOD in 1983, a polyester sculpture commissioned by the University of California for their San Diego campus. Ten years later at 63, Saint Phalle, dealing with health problems derived from inhaling toxic fumes from her work with polyesters, moved to La Jolla, where she began the series of silkscreens currently displayed at Nohra Haime Gallery.

CALIFORNIAN DIARY is a collection of silkscreens that compose a visual diary of Saint Phalle’s life and work during her first year in California. It would also be the starting point for her design of the famous QUEEN CALIFIA’S MAGICAL CIRCLE, her last sculpture garden built in Escondido, CA from 1999-2003. The silkscreens consist of personal designs and drawings of figures and landscapes accompanied by entries and notes about her experiences.

BLACK IS DIFFERENT goes back to her previous black NANAS, a symbol of her social activism inspired by the African American Civil Rights Movements in the U.S. and her fight against racism and sexism, for tolerance and equality.

Prints such as MY MEN are a perfect compendium of the acceptance and equality values she pursued her whole life in a male dominated field. Her involvement in the feminist movement and her readings of Simone de Beauvoir produced a clever analysis about the pressure and disregard of women’s roles in our modern world.

QUEEN CALIFIA and SHAMU! KILLER WHALE are records of her experiences and work, allowing a glimpse into the sources of her inspiration and the outstanding and imaginative language of her fantasy world.

CALIFORNIAN DIARY is a substantially full contemplation of Saint Phalle’s vehement world and mind. A self-taught sculptor, painter and filmmaker, her mark on art history continues to have an extraordinary dimension. Her work is represented in numerous museums and public collections around the world. In 2000, she received the Praemium Imperiale in Japan, the equivalent of the Nobel Prize for the art world. In 2014, the Grand Palais in Paris exhibited a major restropective of her work that travelled to the Guggenheim Museum in Bilbao, where it currently resides. Niki de Saint Phalle died at the age of 71 in La Jolla, California in 2002.