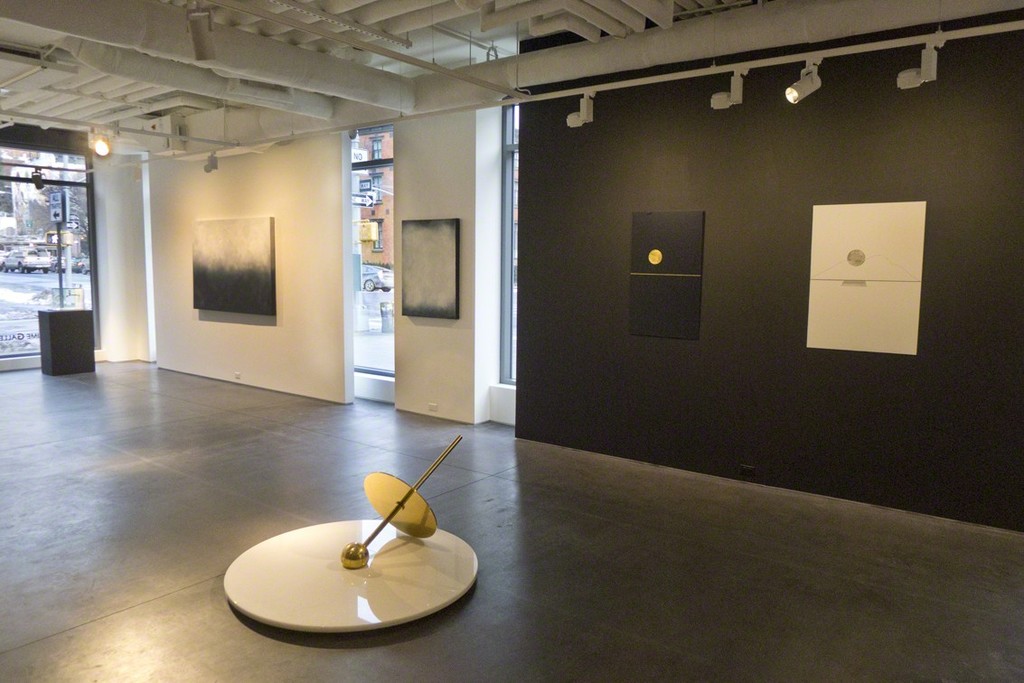 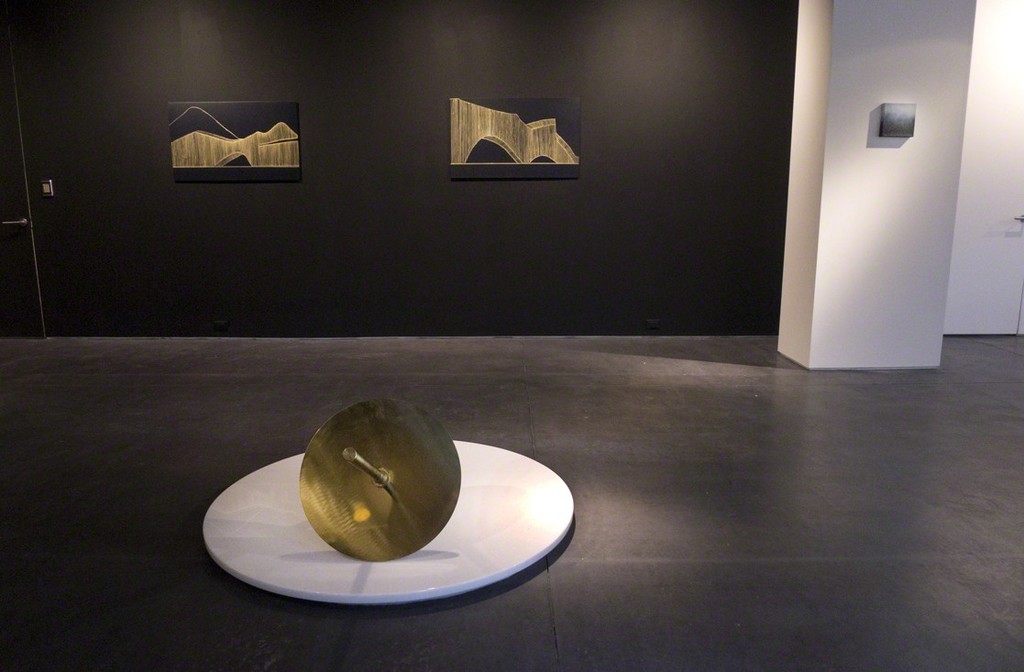 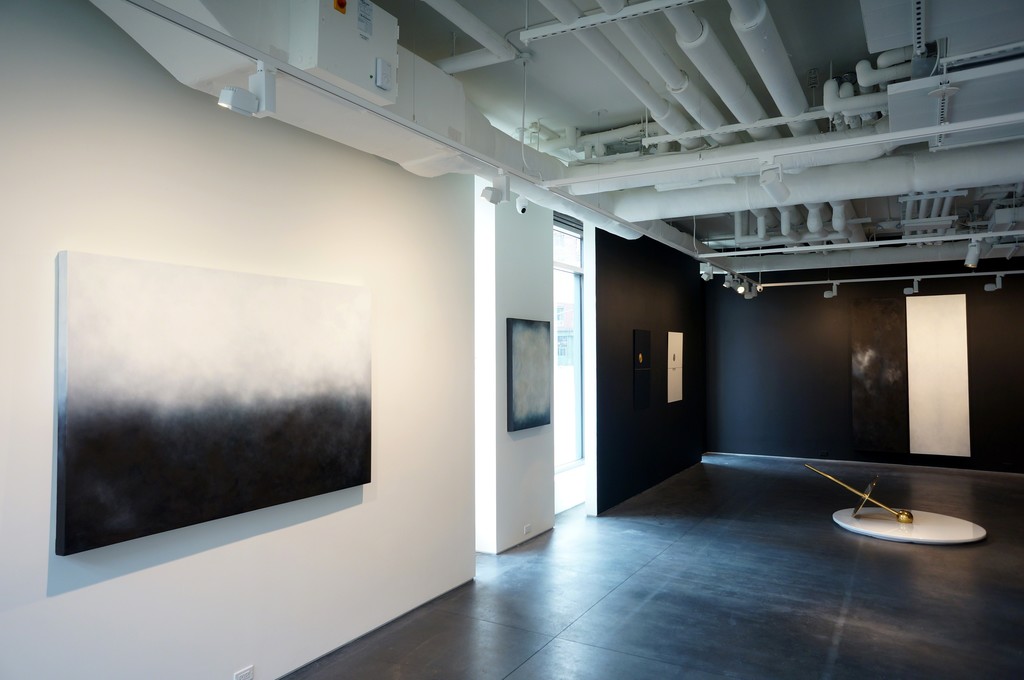 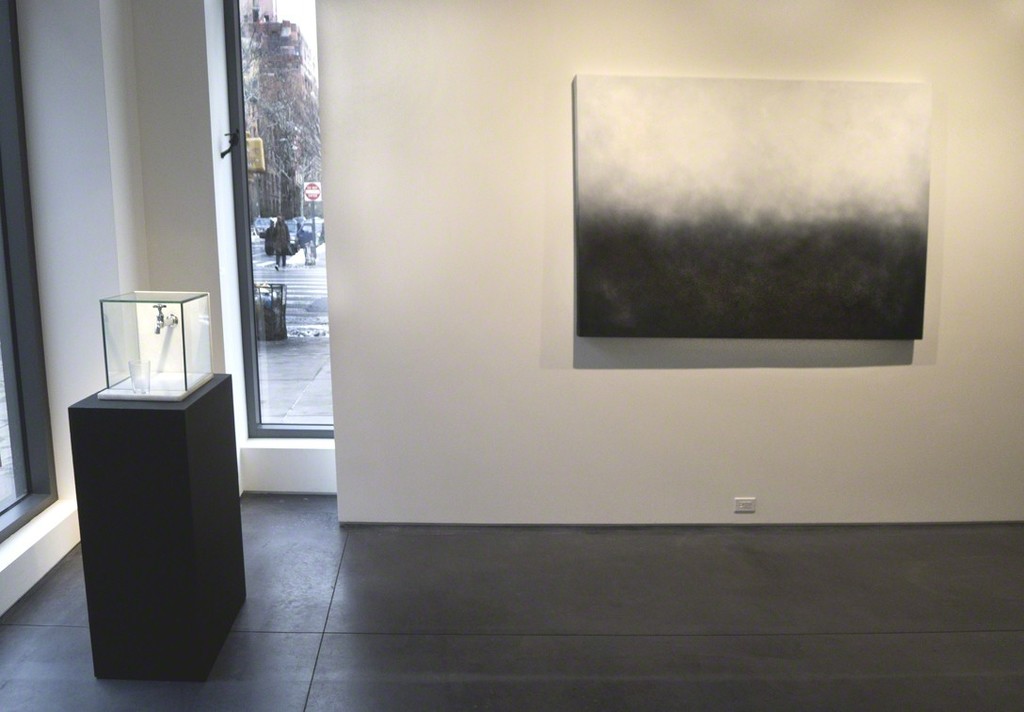 POLAR OPPOSITES brings together selected works of Canadian artist Julie Hedrick and Brazilian artist Anna Paola Protasio, revealing each artist’s methods in considering and depicting the natural world. The different techniques they employ in their approach is highlighted in this exhibition. Hedrick’s voluminous, abstract oil paintings contrast with Protasio’s geometric, recognizable forms and use of brass and aluminum. Using a limited palette of black, white, dark blue, and gold, Polar Opposites presents the artists’ views on the environment and its transitions, and the accompanying human experience.

Protasio’s background in architecture and design is revealed through her structure of carefully controlled lines. Reflected in the contrasting colors of Moonstruck and Moonstruck in the Summer, separate metals are used, signifying different seasons and stages in time. In Fragment I and Fragment II, paint scraped away in thin, deliberate lines reveals the brass underneath, providing us with a somewhat tenuous, yet enduring, carved depiction of glaciers. Transition of time is also explored in Marking Time, a brass and marble sculpture that serves as an interactive, mobile sun dial. The precise, sharp, cutting process in Protasio’s work opposes the hazy, soft brushstrokes of Hedrick’s paintings.

Hedrick’s paintings Study for Philosopher’s Waters and Enchanted I were born from her Alchemy series, which delves into concepts relating to the history of man’s attempt to alter nature’s chemistry for the pursuance of gold. Hedrick explores this phenomenon through her signature abstraction; the paintings whirl with gradations of black and white, creating dramatic, layered canvases in which the light seems to pulse and breathe from its depths. The pieces chosen from the Alchemy series were selected from the beginning stage of the process, before the transmutation into gold. The inclusion of one of Hedrick’s recent paintings, the Pillars of Peace, unites the exhibition in its placement on the far wall of the gallery by further highlighting the opposing artists’ techniques in its stark yet nuanced contrast of black and white.

Julie Hedrick has exhibited extensively across the United States, Colombia, Europe, and Canada. She is a graduate of the Painting Studio Program at Nova Scotia College of Art and Design (NSCAD). Born in 1958 in Toronto, Canada, Hedrick is now based in Kingston, New York. She is also a poet and has participated to great acclaim in readings, performances, set designs and discussion panels. Hedrick has been represented by Nohra Haime Gallery since 1998. Additionally, Hedrick has a background of education in anatomy, physiology, pathology, and healing through sound.

Born in 1966, Anna Paola Protasio is currently based in Rio de Janeiro, Brazil. After a career of 20 years in architecture and design, Protasio transitioned into the world of fine arts in 2006, working primarily in video, sculpture, and installation. Protasio has held solo exhibitions in museums and cultural centers throughout Rio de Janeiro, such as House France Brazil (2008) and the National Museum of Fine Arts (2010). Protasio was the winner of the Contemporary Art Salon of Foreign Ministry for Sculpture in 2012. Protasio has been represented by Nohra Haime Gallery since 2013.