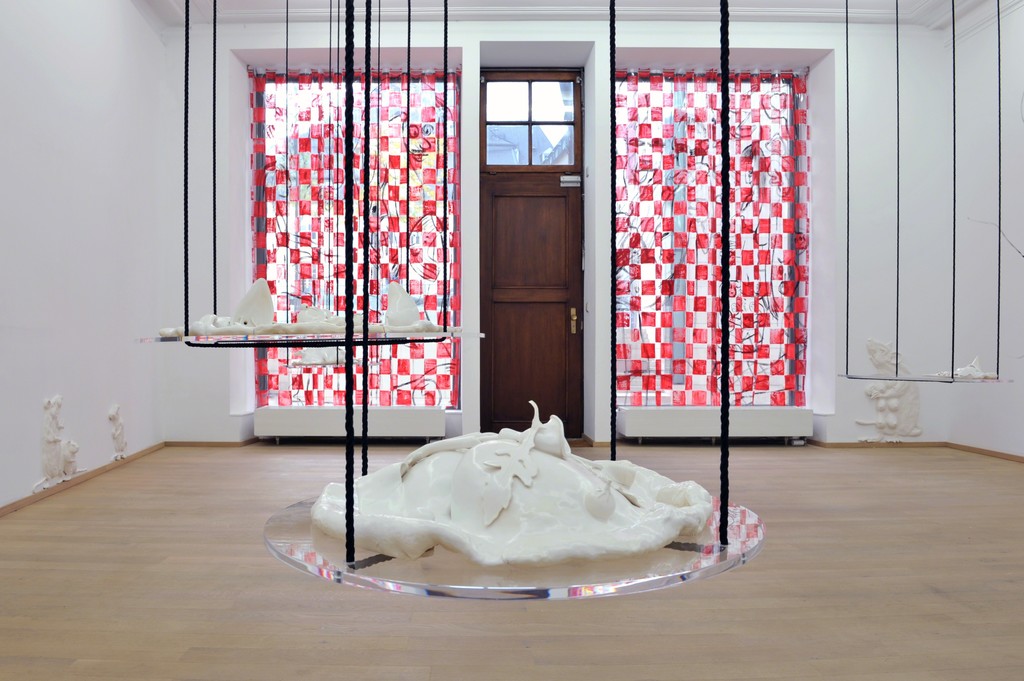 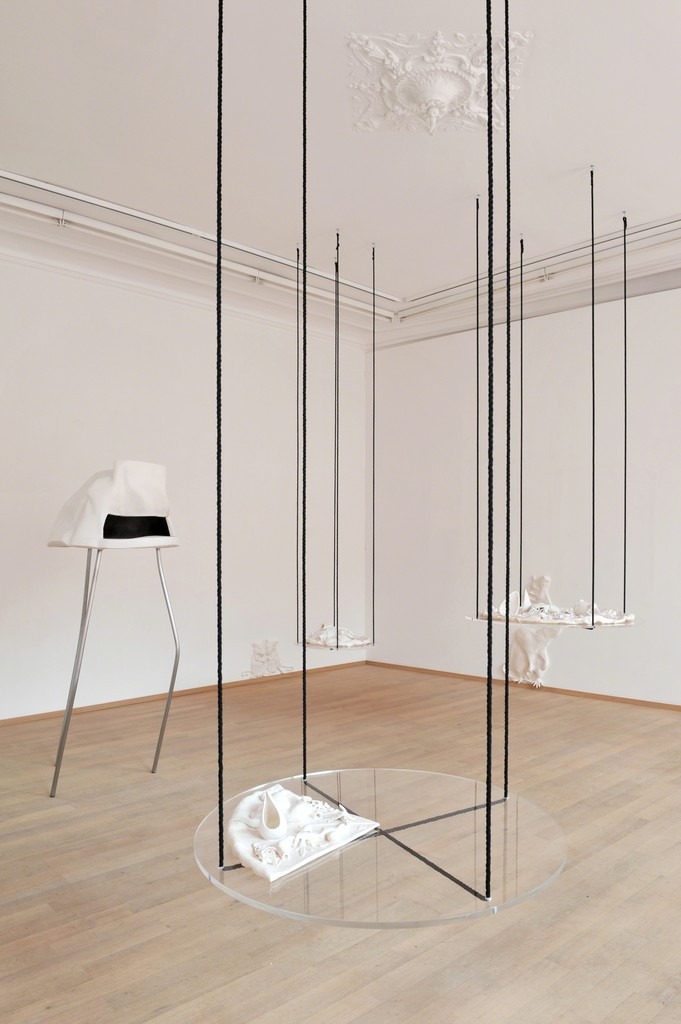 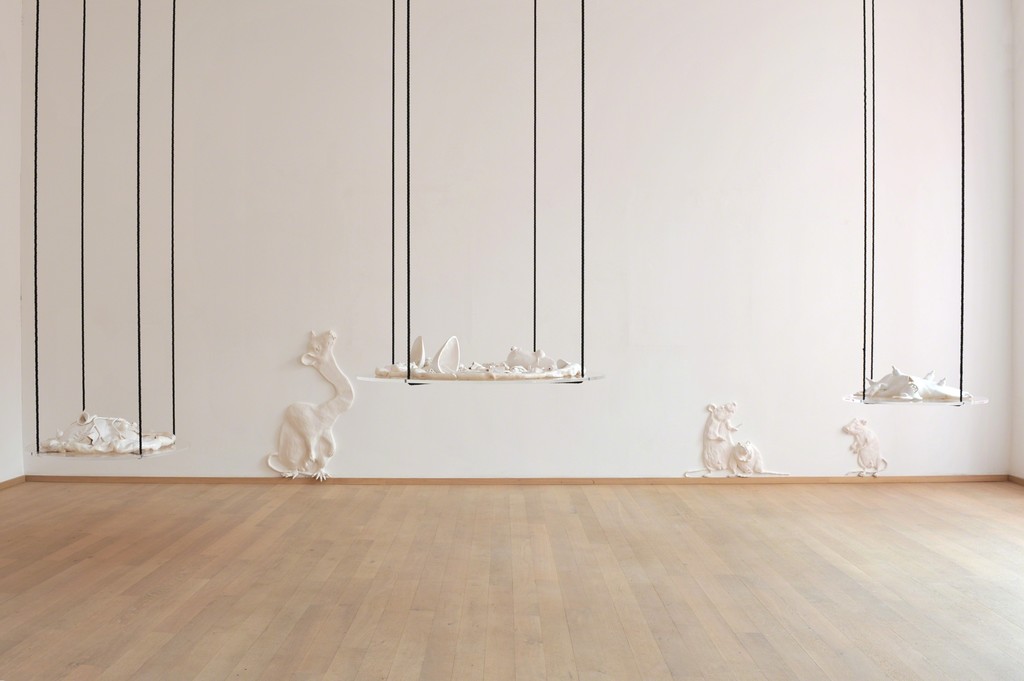 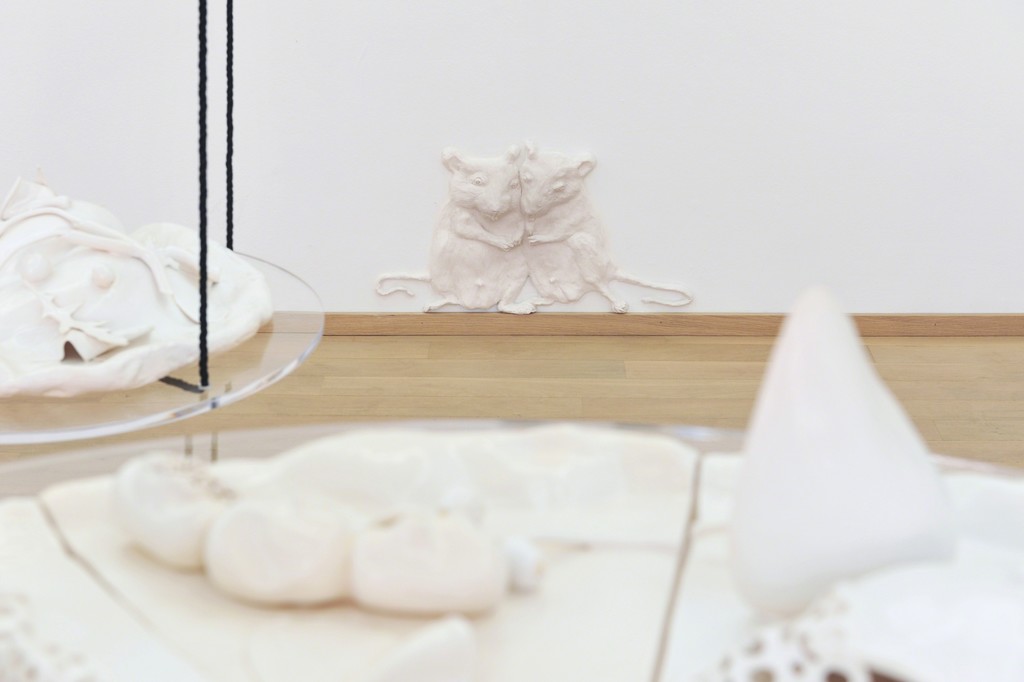 ‘People With Vaginas’, printed in pink letters on stickers, is the title of the second exhibition by Aline Bouvy at Nosbaum Reding Gallery. The starting point for this project was a designation of the female sex appearing in an article on the design of speculums and other gynaecological tools made from soft materials as alternatives to the metallic coldness of the obstetric leg separator. (1) The new designs are reminiscent of sex toys or the bottle nipples for young animals the artist inserts in her white earthenware pizzas suspended on giant trays.
Human organs are incorporated into her pizza toppings among vegetables and sausages. Food and intestines mix with the other elements of the exhibition, which revolve around eating each other, as suggested by the photograph of the anti-cannibalism spray that the artist associates with anti-capitalism, the subtext of this exhibition around bowels.
A scavenging animal such as the rat, the main character of the show, becomes endearing through its humanisation, despite embodying our unconscious fear of attacks from below. The pizzas are body parts and the rats are sophisticated humans, in the manner of fables that use animals as human metaphors. Anthropomorphism and cannibalism are called upon to dissect our relationships to each other and to the body, between attraction and repulsion, between ‘I love you’ and ‘I eat you’.
Rats survive on the bins of humanity. Pigs are suspected of cannibalism when coerced into intensive farm life. We eat ourselves. Mad-cow powder. Everything is simultaneously black and white, deep and superficial. Colour is reserved for the representation of the supporting structures in fake wood and false brick, the whole scenery appearing on the backdrop of a landscape painted al fresco. Being in a dream and present at once. A ubiquitous elsewhere that exists in our heads and our dysfunctional generic bodies. A delusion of consumption that leads to eroticisation, to industrial craving.
A play with images that mirror (speculum) each other, as imagined by Claes Oldenburg in the 1960s with his window displays of fake food. Here, the transparency of the supporting material responds to the opacity of the black wall: black humour as the only way out of despairing capitalism? And running through it all, a total creativity of mutant rather than despairing characters.